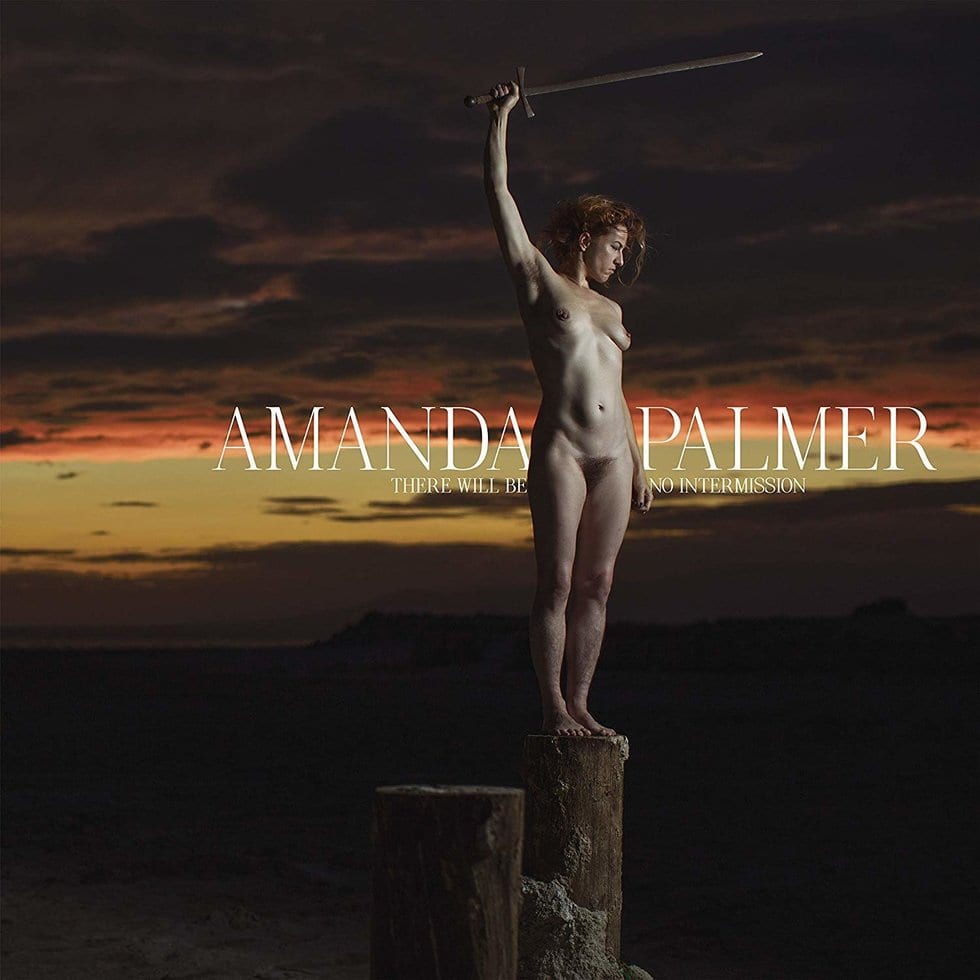 There Will Be No Intermission
Amanda Palmer
Cooking Vinyl

Amanda Palmer has always demanded our attention and will go to extremes to get it. Case in point: she stands defiantly nude on the cover of her new album There Will Be No Intermission. But with every one of the record’s ten primary songs clocking in at over five minutes (two passing the 10-minute mark), she wants even more: she demands our time. Give her the time; pay close attention; it’s worth the ride.

There Will Be No Intermission is comprised of those ten songs each separated by a brief instrumental interlude (not to be confused with an intermission) and they show Palmer at the top of her game. She has always been one of our strongest songwriters, going back to Dresden Dolls, but her proclivity to release just about everything she creates in warts-and-all abandon sometimes obscures that fact. Palmer can be great when she’s spontaneous, but when she takes her time and really crafts a song, she’s damn near incomparable.

On first impression, There Will Be No Intermission is a more subdued and reflective collection of songs that Palmer’s previous major release Theatre Is Evil. Her piano and ukulele playing dominates, and the arrangements are more symphonic. Support players add flourish and loudness where needed, but this is not a band album like the previous record. Theatre Is Evil was a big gesture album, an extrovert who enters the room dancing and trailing a feather boa; this album is the introvert in the corner drawing everyone into its world. There remains, too, a carnivalesque element that evokes her Evelyn Evelyn collaboration with Jason Webley.

Palmer is a master at making her personal observations and experiences universal to her broad fan base. In songs like “Good Day”, “The Jeep Song”, or “Delilah” from her Dresden Dolls recordings or later works like “Ampersand” or “The Bed Song”, Palmer exposes her innermost self in a way that allows listeners to insert themselves, to experience pain, memories, or emotions that are personal yet shared. In a very important way, Palmer could be called the patron saint of broken adolescence, as many of her most powerful songs focus upon that most delicate and troubling transition period with its myriad challenges and curses. The festering doubt that seeps into adulthood and continues to whisper poison is one familiar to children of the “greatest” generation (who had their shit together) and to children of the baby boomers (who act like they do). Palmer captures the perpetual imposter syndrome that is adulthood for so many who have experienced trauma during their adolescence.

Palmer captures the intimacy and fear of adolescence on the brilliant “Judy Blume”, a personal narrative of self-discovery through the intercession of a great artist who speaks to one’s soul at a most important time. Amidst all the trauma of burgeoning sexuality, the intimacy shared with Blume’s books provided Palmer with a guide and a psychological shelter. “I don’t remember the details of seventh grade,” she sings at one point, but can rattle off the major events in the lives of Blume’s fictional characters, and those are all the more real for how they shaped her: “All of them lived in my head, quietly whispering: You are not so strange.” In many ways, Palmer is a Judy Blume to her fans, connecting to their own interior voices, helping them to find those voices, and reassuring them that they are not alone.

But mastering the queasiness of adolescence does not render Palmer incapable of facing down adulthood’s most challenging or controversial elements. “Voicemail for Jill” is that rarest of things in our current public debates: a humane and understanding reflection on the necessity and complexity of making a choice to have an abortion. Palmer mixes compassion with dark humor born of experience (In one promotional video for the album’s release she notes that she has in her life experienced an abortion, a birth, and a miscarriage). The song puts the lie to the common misperception that abortion is a psychologically easy decision for anyone or that it does not linger as a loss.

Palmer follows this with “A Mother’s Confession”, where she takes on the myth of the perfect mother by presenting a long catalog of trivial mistakes familiar to any young parent: turn your back for a moment and the baby falls from the changing table; sleepwalking amidst a day’s seemingly endless errands, the baby gets left in the car for five minutes; practically sleep-driving, you run a stop sign. All could turn out bad, of course (that’s why we have a 24-hour news cycle to monitor us against our imperfections), but most of us survived our parent’s mistakes, and most or our children will survive our own. Any over-tired parent with a sense of humor will feel a temptation to join in with the children’s choir that closes the song: “At least the baby didn’t die.”

It’s tempting to take on every song here. They’re all noteworthy for assorted reasons. Certainly “Bigger on the Inside” is going to generate strong reactions as Palmer doubles down on her right as an artist to make a plea of compassion for an uncompassionate soul (the Boston marathon bomber), referencing the controversial poem she published in the aftermath of that event. Again, this is part of what makes Palmer a fascinating creative figure. In a musical age where singles are debated in boardrooms and artists employ teams to produce tweets engineered for maximum public acceptance, it’s refreshing to have an artist who seems genuinely unafraid to risk failing spectacularly in the service of making honest art.

There Will Be No Intermission is a triumphant return of an uncompromising artist. It is singularly the best piece of work that Palmer has produced in her career.