Nashville-based singer-songwriter and fiddle-playing roots musician Amanda Shires didn’t have to gauge the temperature of the audience about 30 minutes into her Atmosphereless tour stop at the Bluebird Theater in Denver. Shires already knew she was hot. No, even this petite beauty born in Mineral Wells, Texas, and raised under a brutal Lone Star State sun in an oppressively humid climate couldn’t beat this heat on stage.

Following opening act L.A. Edwards, Shires and her four-member band made their entrance to the sounds of “You Want It Darker” by Leonard Cohen, her musical hero who died in 2016. By the time they finished “My Love (The Storm)”, the set’s seventh song, this hard-rocking outfit was burning down the house in front of a receptive, demographically diverse crowd of 300 ticket buyers whose fiery enthusiasm made up for numbers falling considerably short of a sellout.

Taking off her black jacket filled with embroidered red roses and her last name stylishly displayed in cursive on the back, Shires exclaimed, “It’s hot in here! In all the good ways, it’s hot.” No one would dare to argue, even though the calendar had just turned to March while Old Man Winter was still lingering in Colorado, where even a thin layer of snow greeted Monday morning early risers along the Front Range.

Starting with the eye-opening “Break Out the Champagne”, Shires and Co. — dazzling guitarists Seth Plemmons and Zach Setchfield, and industrial-strength rhythm section Macey Taylor (bass) and Paul Griffith (drums) — proceeded to deliver a scorching set that featured seven songs from her most recent solo album, the sumptuous To the Sunset, which reached No. 7 on my list of Top 18 albums of 2018.

About a month into the current tour, this show wasn’t without flaws, but that only added to its authenticity. Maybe Shires threw the band some curveballs by wanting to “wander off the setlist”, as she put it, “because we’re having so much fun”. But early on, as a perplexed Setchfield tried to figure out which guitar to grab for the Barbara Keith cover of “Detroit or Buffalo”, Shires joked, “I don’t know what’s happened to these folks. I’m gonna blame myself. I actually think it’s very cute.”

After opening the set with an electric guitar, Shires proved to be in her element with some nice fiddle runs on “Detroit or Buffalo” off her 2011 album Carrying Lightning, and the instrument served her extremely well throughout the night. My appreciation of Shires and her fiddle playing began with that album, the third of her solo career, almost a decade ago. It came two years before her February 2013 marriage to Southern folk-rocker and ex-Drive-By Trucker Jason Isbell and four years before the 2015 birth of their daughter Mercy Rose.

That respect only intensified in 2013, when I interviewed Isbell, then Shires on separate occasions months apart, and saw them play together in his band the 400 Unit on a small stage at the Hangout Festival in Gulf Shores, Alabama. They each released breakout solo albums that year — Isbell’s Southeastern and Shires’ Down Fell the Doves — both of which made by year-end list at the Huffington Post. Their albums tied for fourth place because they “simply belong together” as “this year’s All-Americana couple”.

The rock ‘n’ soul mates have made astonishing strides since then, as solo artists, masterfully visual storytellers, and dedicated partners in life who have worked on each other’s projects. (Isbell performed at two Shires shows over the weekend in Montana.) If there had been an award for best interview subjects of 2013, they would have tied for that, too. Among the many topics the then-newlyweds covered were their individual career-threatening obstacles — Isbell’s alcoholism and Shires’ hand injury that once put her fiddle playing in jeopardy. 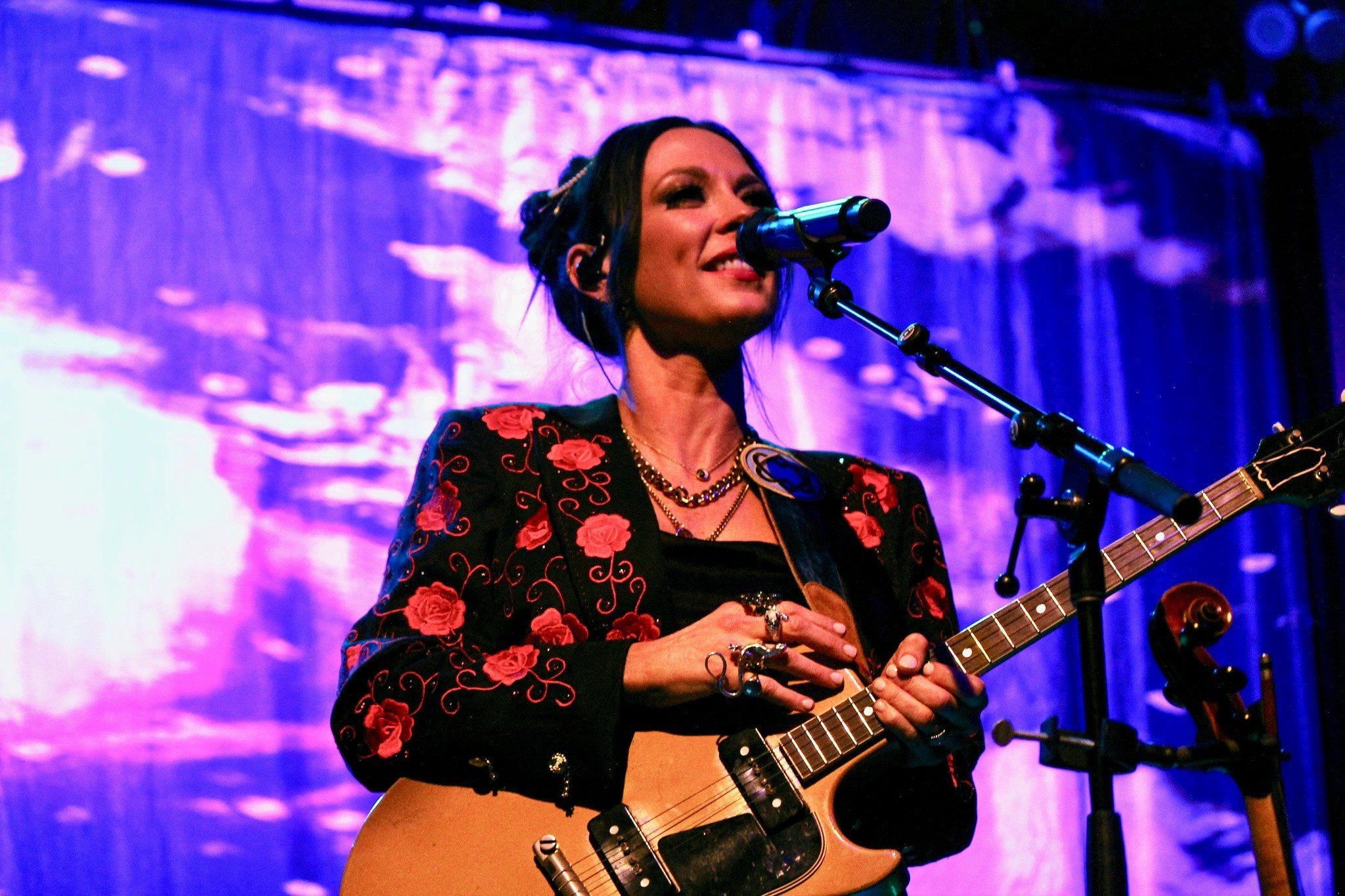 Photo: Michael Bialas / Amanda Shires at the Bluebird Theater in Denver on 2 March 2020

The classically trained Shires delved deep into the origin story of her passion for the instrument and what she preferred to be called — violinist or fiddler. “I consider myself more of a rock ‘n’ roll fiddler,” Shires said in our interview. “But I don’t get offended if I’m called either one. I’ll take either one. ‘Cause they’re both great, and I can do both. But it’s more of a blend. And I also think it’s a violin when you’re selling it and a fiddle when you’re buying it.”

Playing the violin/fiddle, though, must be an extraordinary experience for the accomplished musician who started learning her craft at Bayless Elementary School in Lubbock, Texas. Whether she’s cradling, plucking, strumming, or raging on what she once called a “lonesome instrument”, the fearless Shires made the centerpiece of the Atmosphereless show in Denver feel alive and loved.

Shires featured all her band members on an extended jam during a rendition of “Look Like a Bird” (from Down Fell the Doves) that lasted nearly 15 minutes en route to its thunderous conclusion. She also shined vocally and instrumentally on exquisite numbers like “Parking Lot Pirouette” and “Eve’s Daughter”, both from To the Sunset.

Her distinctive voice that’s been compared to Dolly Parton’s was in full force during the intensely dramatic “Parking Lot Pirouette” as piercing lyrics like “I thought I’d been holdin’ on too tight / In the fallen lane of life” cut like a Ginsu knife. That delicate yet delectable vibrato reminded me again of our 2013 conversation, when Down Fell the Doves‘ “A Song for Leonard Cohen”, about her imaginary encounter with the Canadian legend, came up, along with these lyrics: “We’d compare mythologies / And toast those friends that never believed / That our voices ever had much to offer.

“I can’t sing like Aretha Franklin as much as I wish I could. And I don’t sing like Etta James and the Judds as much as I wish I could,” Shires offered then, accepting as a “high compliment” any comparisons to Parton. “I feel like there’s so many voices, and it’s necessary for there to be a lot of different voices because we can’t all like the same art. That would just be so boring. … If anybody wants to hear it, I’m here. It makes for a more interesting world for there to be more than one kind of singer.”

Shires is not only astute and fearless but also engagingly transparent as a strong-willed trouper who will fight to the finish.

Nearing the final half-hour of the 98-minute set that included two encores — an a cappella version of “Kudzu” (from Carrying Lightning) and “Deciphering Dreams”, the recently released swinging single that had her moving and grooving — Shires figured she should explain a nagging cough that was becoming more persistent. “Don’t worry, I’m not contagious,” she told the crowd. “I’ve been going to a doctor every day. Truthfully, I was hoping… this is gonna sound bad, but this is just my thoughts. So after I got tested for all the flus, and they said I didn’t have it, well every day I’ve been going back to see if I do. Every day, they say no. And I just keep hoping it’d be true because then I wouldn’t have to worry about having to have it later. I got tested for all of them. The doctor said I had a good ol’ Americana virus. (The crowd laughs.) And I said, ‘That’s lame, man. What even is that?’ I like Americana but … I don’t know. A cooler name.”

Shires kept her cool, deftly handling the tender ballad “Harmless” that included this piece of vivid imagery: “Your eyes a shade of wonder / Like if thunder had a color.” From 2016’s My Piece of Land, she said, “I made up” the song for her bass player’s sister. During that same lengthy intro, a busy night “when I let Jason take me out for a dinner” was discussed. That was met with huge applause as was the raucous rocker “Wasted and Rollin’ ” (from Down Fell the Doves), with the violinist/fiddler back on electric guitar. 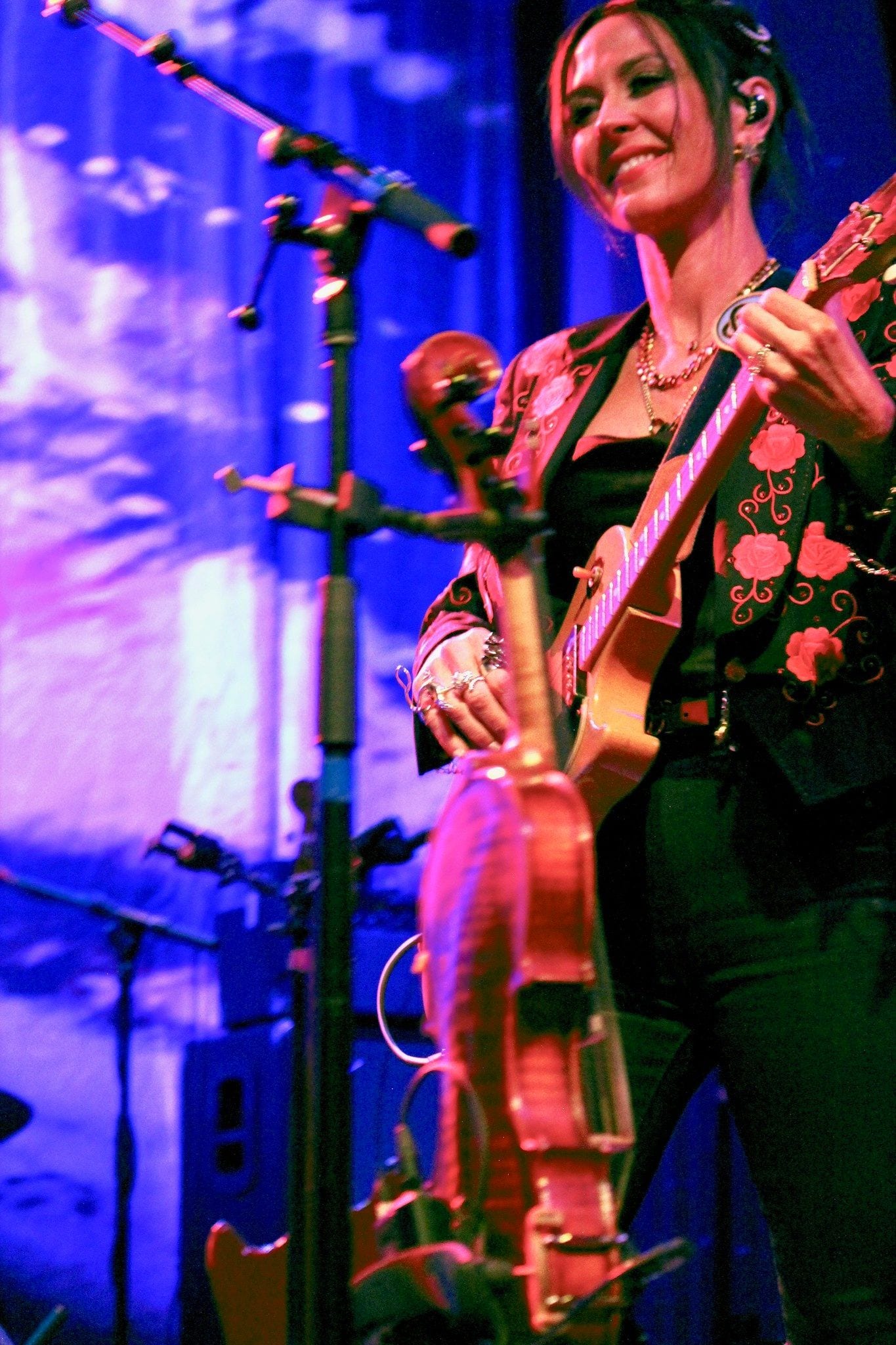 Photo: Michael Bialas / Amanda Shires at the Bluebird Theater in Denver on 2 March 2020

Before “Highwomen” and “Don’t Call Me”, two tunes she cowrote, no mention was made of the super-girl group side project that Shires put together with Brandi Carlile, Maren Morris and Natalie Hemby for their explosive 2019 album that includes both songs.

While the duties are shared among that Fabulous Foursome known as the Highwomen, there was no doubt who was running this show. Shires abruptly stopped Setchfield and his acoustic guitar during the first verse of “Highwomen”, sternly telling him, “You can’t play it like that.” The second take was a glorious affirmation that persistence pays off. That passionate pursuit of making it right could only mean one sure thing: Where there’s smoke, there’s Shires.