Fame came late to Andrea Camilleri, the Sicilian author who died 17 July in Rome at the age of 93. He was 68 when he published the first of a series of mystery novels featuring Salvo Montalbano, the commissario (chief of detectives) in Vigàta, a fictional town in western Sicily. But, beginning with La forma dell’acqua (The Shape of Water) in 1994, the novels became bestsellers in Italy and then internationally. Stephen Sartarelli, Camilleri’s English-language translator, renders them from the author’s Sicilian-inflected Italian into an idiom that often reads like Italian-American Brooklynese yet preserves the author’s lean style and ironic voice and wit. (To date, 26 of the novels have been published in English.) The books have a fervent following not only among Italian and Anglophone readers; they have been translated into some 30 languages.

Five years after the first Montalbano novel came out in Italy, RAI, the national public broadcasting company, began to produce a series of television movie adaptations. Directed by Alberto Sironi, they star Roman actor Luca Zingaretti as the Sicilian detective and are filmed on location in Sicily, mainly in the province of Ragusa. Twenty years later, the series is still going strong on RAI, with each new episode attracting millions of viewers. The films have been sold to 20 countries; all 34 episodes to date are available in English-subtitled versions from the US-based network, MHz.

The films were so popular that in 2012, RAI developed a prequel series, “Il Giovane Montalbano” (The Young Montalbano), based on Camilleri’s short stories about the detective’s early years. Its two seasons aired to date also can be seen on MHz.

There’s no mystery about the international popularity of the Montalbano novels: they are entertaining, ingeniously plotted, and highly addictive page-turners. But setting and characterization are as important, if not more so, than story. Camilleri brings his readers into a fully imagined world, that of contemporary Sicily, with its beguiling mix of tradition and up to the minute modernity. His characters are comic types, like figures in commedia dell’arte, yet they also are fully developed, idiosyncratic and memorable. Besides the inspector himself, they include his closest associates, the detectives Domenico “Mimì” Augello and Giuseppe Fazio; the syntax-mangling, idiot savant cop Catarella; the police bureaucrats Alderighi-Bonetti and Dr. Lattes; and the hilariously rude, profane, and cannoli-loving coroner Dr. Pasquano. The secondary characters represent a broad swath of Sicilian society, from poor and working class to aristocrats, law-abiding and criminal. 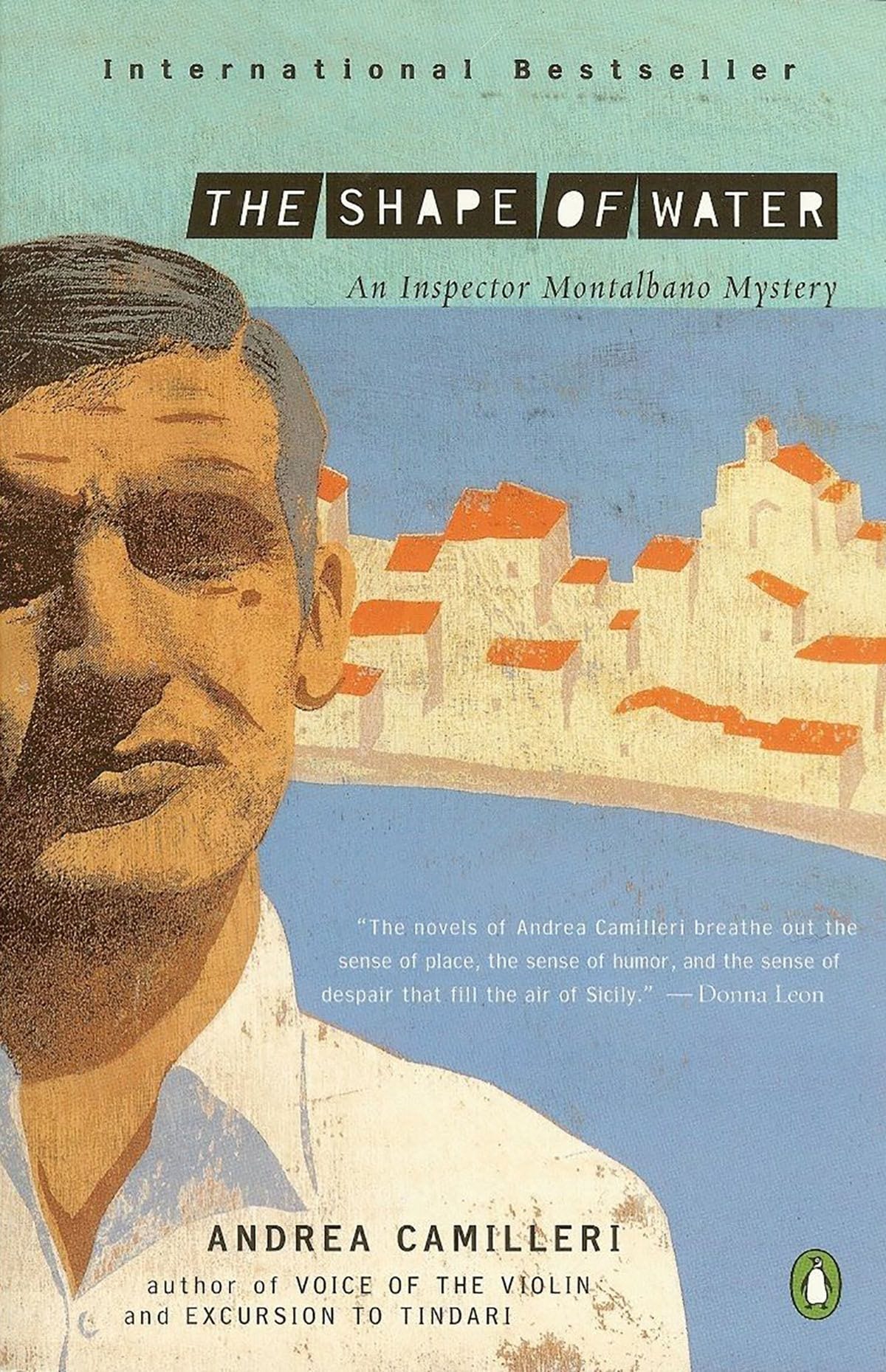 Although the world of Montalbano is mostly male, there are important recurring women characters—his longtime, and long-suffering fiancée Livia Burlando, from Genoa, whom he often consults about his cases (she knows Sicily well yet has an outsider’s objectivity); his housekeeper Adelina, a maestra of Sicilian cooking; and Ingrid Sjostrom, a Swedish friend of Livia’s who married a Sicilian and lives in Vigàta. And, as in detective fiction generally, women play prominent roles as victims and perpetrators of crime.

Montalbano shares a number of attributes with his creator. The chief of detectives in Vigàta, which is modeled on Camilleri’s hometown of Porto Empedocle, is, like the author was, an unrepentant smoker, an ardent gourmand, an atheist and, surprisingly for a police official, a left-winger. In one novel, Montalbano furiously denounces the police who savagely attacked protestors at the 2001 G-8 summit in Genoa. In another, one of his underlings wonders whether his boss is a communist.

Camilleri was a lifelong man of the Left; he had been a member of the Italian Communist Party and he often supported left-wing causes. He loathed and denounced former premier Silvio Berlusconi, and during his last months, he spoke out against Italy’s far-right government and its leader, Interior Minister Matteo Salvini. Camilleri, who grew up under Fascism, said that Salvini “reminds me of a member of the fascist regime.” (“Andrea Camilleri, beloved creator of Inspector Montalbano, dies aged 93″, Alison Flood, Angela Giuffrida, The Guardian, 17 Jul 2019)

He was particularly offended by the inhumanity of the government’s anti-immigrant polices. In the 2016 novel The Other End of the Line, Montalbano assists desperate refugees arriving at Vigàta’s port. When RAI broadcast the movie adaptation in 2018, outraged government supporters denounced Camilleri and the broadcaster. While Camilleri was on life support in the hospital after a heart attack, Italian right-wingers gloated, with one expressing the belief that he should be buried in the sea with his beloved migrants.

Salvo Montalbano can be brusque and ornery, but he has a strong ethical code and passionate commitment to justice. He is outraged by the abuses committed by the powerful: corrupt businessmen, Mafiosi, and shady politicians. In the books, as in real life, those three forces are often in collusion, to the detriment of honest and endlessly put-upon Sicilians. The Catholic Church and its leaders didn’t escape Camilleri’s sharp, satirical eye, either; the author frequently skewered clerical pomposity and arrogance.

Camilleri said that the Montalbano books were inspired by actual crimes he learned about from newspapers or television and later novels in the series centered on international arms and drug trafficking, terrorism, and the plight of immigrants in Italy.

Food —cucina siciliana— is another element integral to the popularity of the Montalbano stories. The novels have introduced readers to some of the most glorious creations of Sicilian gastronomy: pasta ncasciata, a rich, baked dish of macaroni, meat, sauce, and cheese; arancini (filled and fried rice balls), roasted red mullets; typical cheeses like tuma and primosale; pasta with sardines, or with eggplant, or anchovies. When the detective isn’t working on a case, he’s often eating, whether the cooking of his housekeeper Adelina or the seafood at his friend Enzo’s trattoria. After consuming one of Enzo’s multi-course repasts, Montalbano likes to walk from the restaurant to a jetty, where he sits gazing at the sea while puzzling over the details of whatever crime he is investigating. Digestion and ratiocination are inseparable for this detective.

Camilleri, notwithstanding the celebrity and income Montalbano brought him, had an ambivalent relationship with his fictional creation. Known affectionately as “il padre di Montalbano” (Montalbano’s father), he preferred to be remembered for his historical novels, fictional accounts based on real incidents and characters. (There are eight, five in English translation.) He published the first, Hunting Season, in 1992; it was a best-seller in Italy but it took the success of the Montalbano series for it to attract attention outside the country. Reading these novels, most of which are set in 19th century Sicily, you can’t help but think, this is the history that produced the world Montalbano lives in. One of the best, La setta degli angeli (The Sect of Angels, 2011), is based on an actual scandal, the sexual abuse of young girls and women by Catholic priests in a small town early in the 20th century. 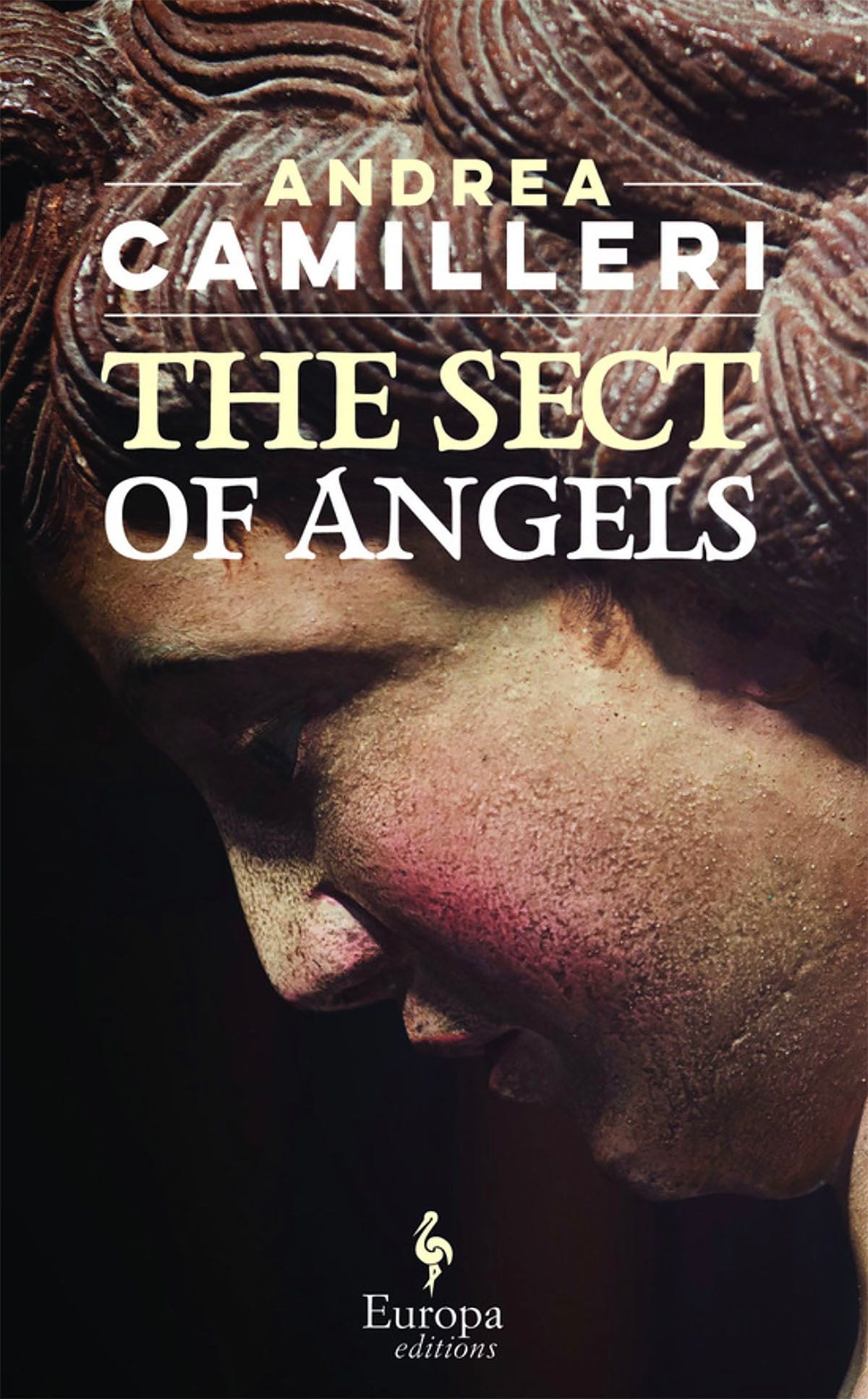 The author once described Salvo Montalbano as a “serial killer of characters” because he had developed a life of his own and demanded so much attention from the author that Camilleri could barely find the time to write other books with different protagonists. He complained— ironically—that he had to keep writing the Montalbano novels just to appease the demanding detective. Once he had finished another one, Montalbano graciously allowed him to pursue other literary interests.

There’s a delightful meta-moment in one of the later novels in which Montalbano channels his creator’s exasperation. The detective’s girlfriend Livia wants to take a day trip to the town of Ragusa Ibla. Montalbano balks; the city is used as the primary location for “those TV movies about me” and he wants to avoid the hubbub of the shooting and the crowds that inevitably gather. (There are popular Montalbano tours of the city and other nearby locations where the films are shot.) Just as irritating, he says, is the fact that he has a full head of hair and the actor who plays him—Luca Zingaretti, whose name Montalbano mispronounces—is bald.

In 2009, Zingaretti and members of the RAI creative team came to New York for a screening of what was then the newest film, “La Luna di Carta” (Paper Moon). During a Q&A after the film, he praised the literary qualities of Camilleri’s books, adding that he was certain such great postwar Italian auteurs as Elio Petri and Francesco Rosi would have adapted them for the screen. When an audience member observed that the actors fully incarnated Camilleri’s characters, Zingaretti was pleased to agree, noting that over the years that the cast worked together they became a close-knit ensemble. Zingaretti expertly conveys Montalbano’s intelligence and irony, his irascibility and his unwavering moral sense. He also gives the character considerable sex appeal, as a RAI spokeswoman remarked.

Zingaretti said that his relationship with Andrea Camilleri preceded the Montalbano movies. The actor, who made his film debut in 1987, studied drama under the author in Rome. (Camilleri, a successful theater director before he published a book, staged plays by Pirandello and Ionesco, and in 1957, he directed the first Italian production of a play by Samuel Beckett, Endgame.) Zingaretti said that after he auditioned for and won the part of Salvo Montalbano, he was wracked by self-doubt. It didn’t help that a friend who loves the novels told Zingaretti that he would kill him if he “ruined” the character. Before shooting began for the first film (Il Ladro di Merendine, The Snack Thief), Zingaretti called the author to confide his fears that he would not be up to the job. Despite Camilleri’s reassurances, the actor’s worries only worsened. Finally, exasperated by Zingaretti’s increasingly anxious phone calls, Camilleri exploded, “Stop breaking my balls!”

Screenwriter Salvatore de Mola, who has co-written 26 of the Montalbano films, came to New York for the screening of “La Luna di Carta”. After Camilleri’s death, I contacted him for his thoughts about the author.

“Years ago, when [the director and screenwriter] Billy Wilder died,” de Mola said, “an important Italian magazine, Internazionale, had the face of the great director on the cover with the title, ‘The best of the twentieth century.’ I believe that with Camilleri the best of Italy has gone. A great man, and therefore a great writer, with an immense ability to understand the human soul. His characters are unforgettable because they are real. They come from a shared, common experience. Camilleri is not Fellini, he does not have a personal, particular world. Camilleri is the world, even if in recent times he hardly came out of the house because of his blindness. I will miss him, as a writer but also and above all as a point of reference in this Italy of today that seems to be adrift, wandering aimlessly.”

Thirteen years ago, when he was 80, Camilleri wrote the last Montalbano novel; the manuscript is in a safe at his publisher’s office. “When I get fed up with him or am not able to write any more, I’ll tell the publisher: Publish that book,” he said in an interview. (Neil Genzlinger, New York Times, 17 Jul 2019) In a RAI documentary, he spoke briefly and tantalizingly about the novel’s premise. (Montalbano and Me: Andrea Camilleri, Claudio Canepari, Paolo Santolini, Ep 37 MHZChoice.com) Other than the series’ conclusion, there remains only one Montalbano book that hasn’t been translated or adapted for the small screen, Il cuoco dell’Alcyon (The Cook of Alcyon), published in 2018.

With Andrea Calogero Camilleri’s death we, his readers and admirers, can’t help but feel a double loss; we mourn the author and sadly anticipate the demise of his “son”, Commissario Salvo Montalbano, a character so vividly drawn, so unforgettable, that he felt like a real person. 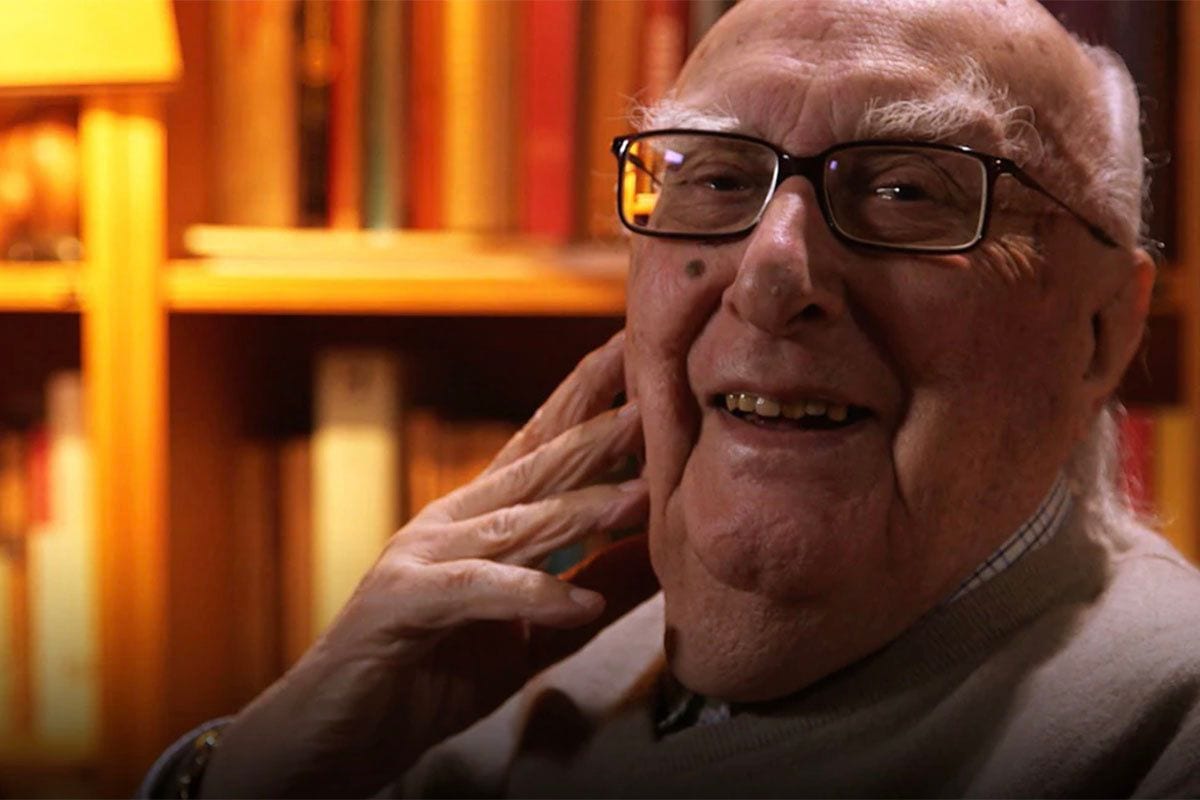 Still from Montalbano and Me (2014) (MHZChoice)