If you’re anything like me, you are woefully ignorant of Brazilian history, especially the late 17th century history of Brazil’s escaped slaves. But at least we’re in good company, because Marcelo D’Salete, author-artist of the extraordinary historical graphic novel Angola Janga: Kingdom of Runaway Slaves, admits in his afterword that he didn’t know this history, either—even though Palmares (which means “victories” and names the network of villages established by fugitive communities in the forests of colonial Brazil) reached a population as high as 20,000, defying Portuguese authorities for decades.

I’m not typically a fan of graphic novels that tackle historical subjects. Too often I find the visual approach faults toward the safely predictable—as though a rendering of historic events precludes the idiosyncrasies of an artist’s personal style. Thankfully, D’Salete avoids that pitfall. Angola Janga (the title means “Little Angola”, the region of Africa from which many of its inhabitants were abducted) has the blunt visual power of black and white woodcuts. While D’Salete stays inside the lines of his rectangular panels and gutters, the energy of his images—the angled perspectives, the chiseled details, the abrupt close-ups, the streaked strokes of his shading—are a match for his equally powerful subject matter.

Originally published in 2017 with the subtitle “History of Palmares”, the Fantagraphics edition, translated form Portuguese by Andrea Rosenberg, helpfully identifies its content for less knowledgeable English speakers with the subtitle “Kingdom of Runaway Slaves”. I presume Rosenberg preserved D’Salete’s verbal style by choosing colloquial phrases—”for crying out loud”, “pipe down” “let’s not get ahead of ourselves”—despite their anachronistic effect. While slightly distracting, the alternative—faux-archaic diction and syntax—could be fatally worse. D’Salate wisely avoids captioned narration, limiting words to brief dialog and allowing the language of images to communicate the bulk of his story.

French comics scholar Thierry Groensteen gives a name to visual motifs specific to comics: tressage or “braiding”. I’m not a fan of unnecessary terms (why not just “visual motifs”?), but Angola Janga convinces me that Groensteen is on to something useful. He likens the repetitions to rhymes or internal quotations, ones that “enter into dialogue with panels not currently visible, establishing relationships among non-adjacent pages” and so producing “an enhancement, a layering, a deepening of meaning”.

If so, then D’Salete is a master of braiding. Some occur within a single page: a bird’s eye view of a round plate of food carried by a woman into a hut, a higher view of the round roof of the hut, and an ending close-up of the village leader’s round eye after he has consumed the—we soon learn—poisoned food. The wedge-shaped opening of the hut also suggests his open mouth as he eats. The combined effect, especially because the page is wordless, unifies the sequence and heightens the individual moments beyond what they convey in plot alone. 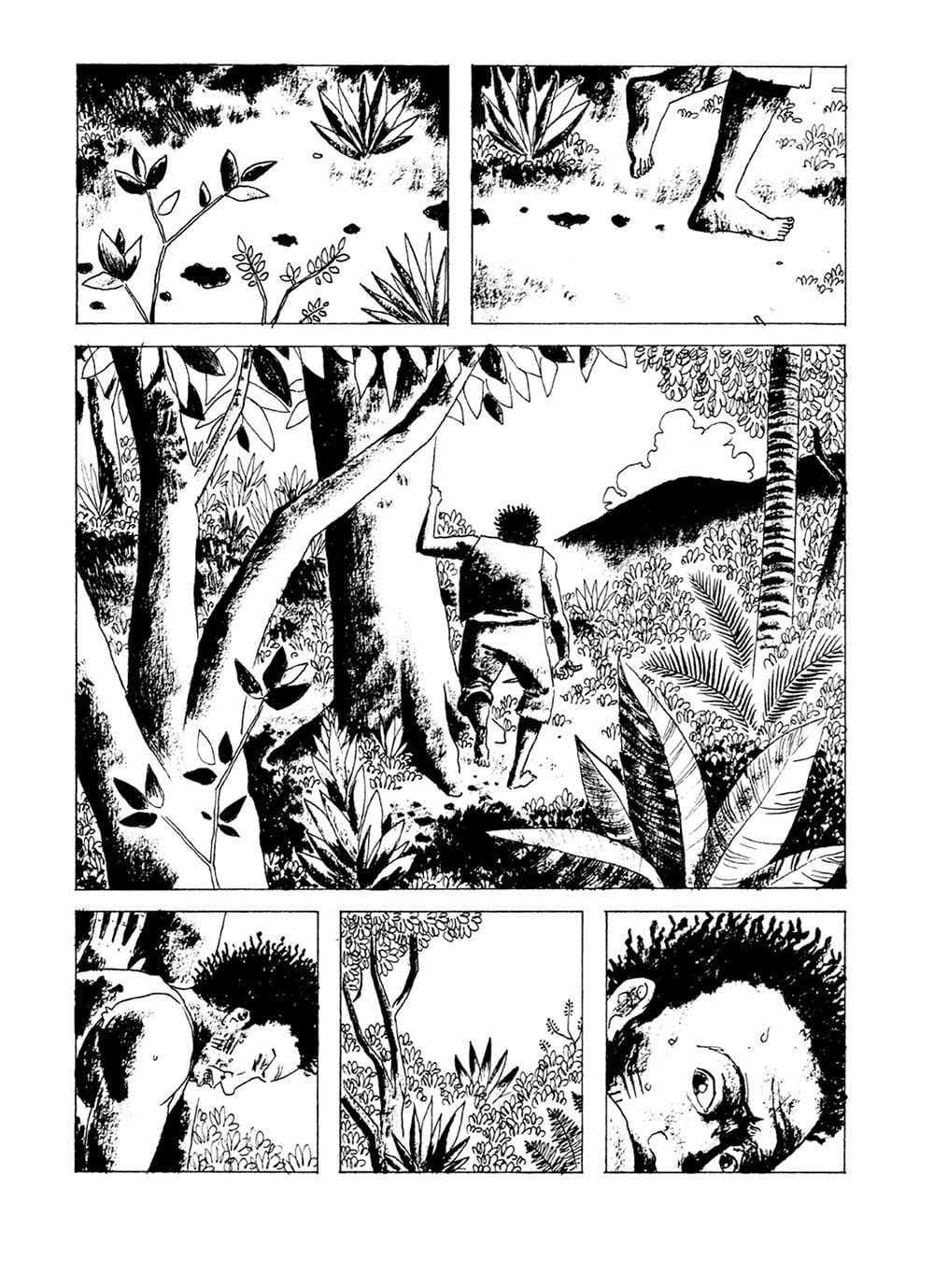 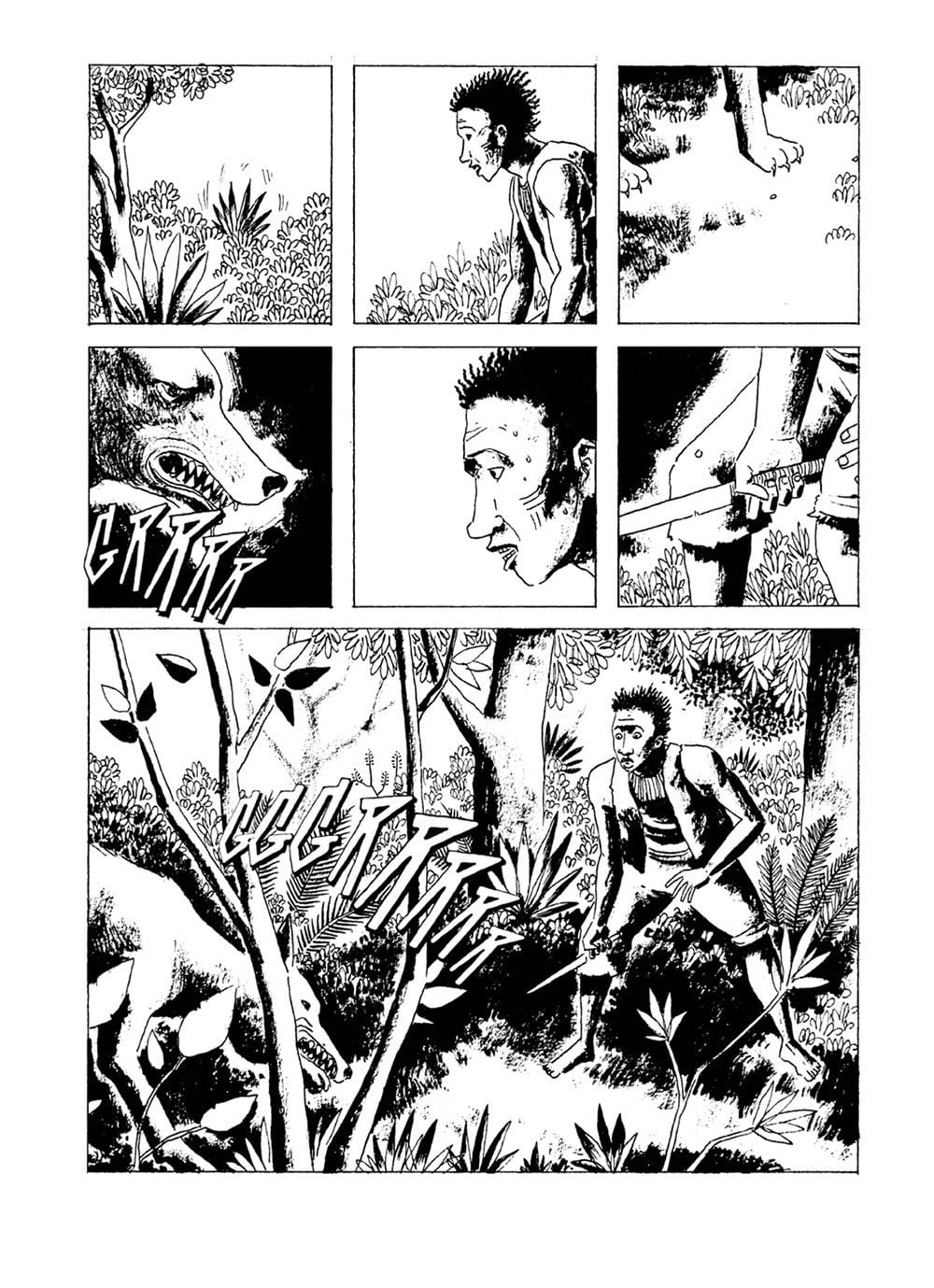 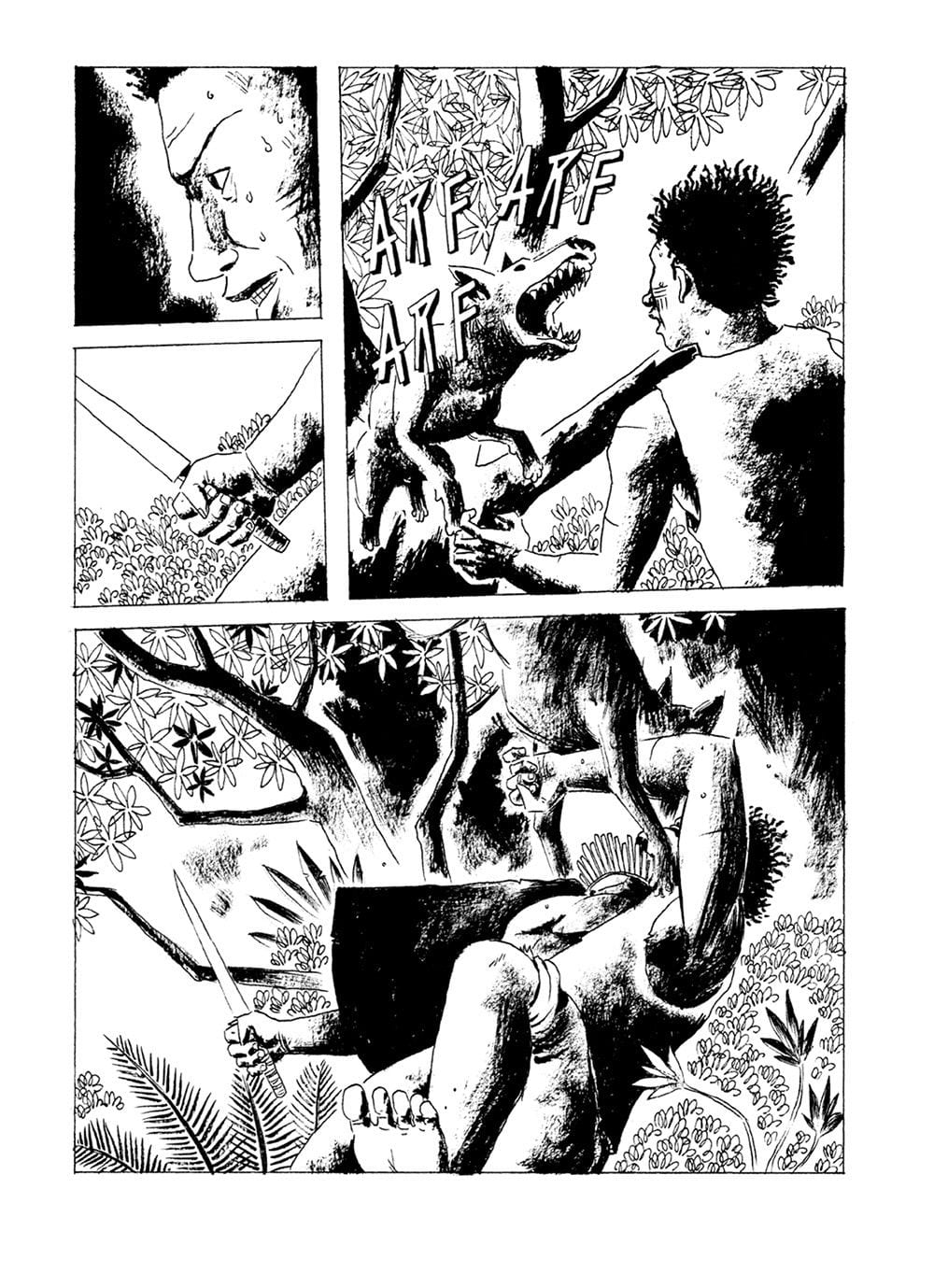 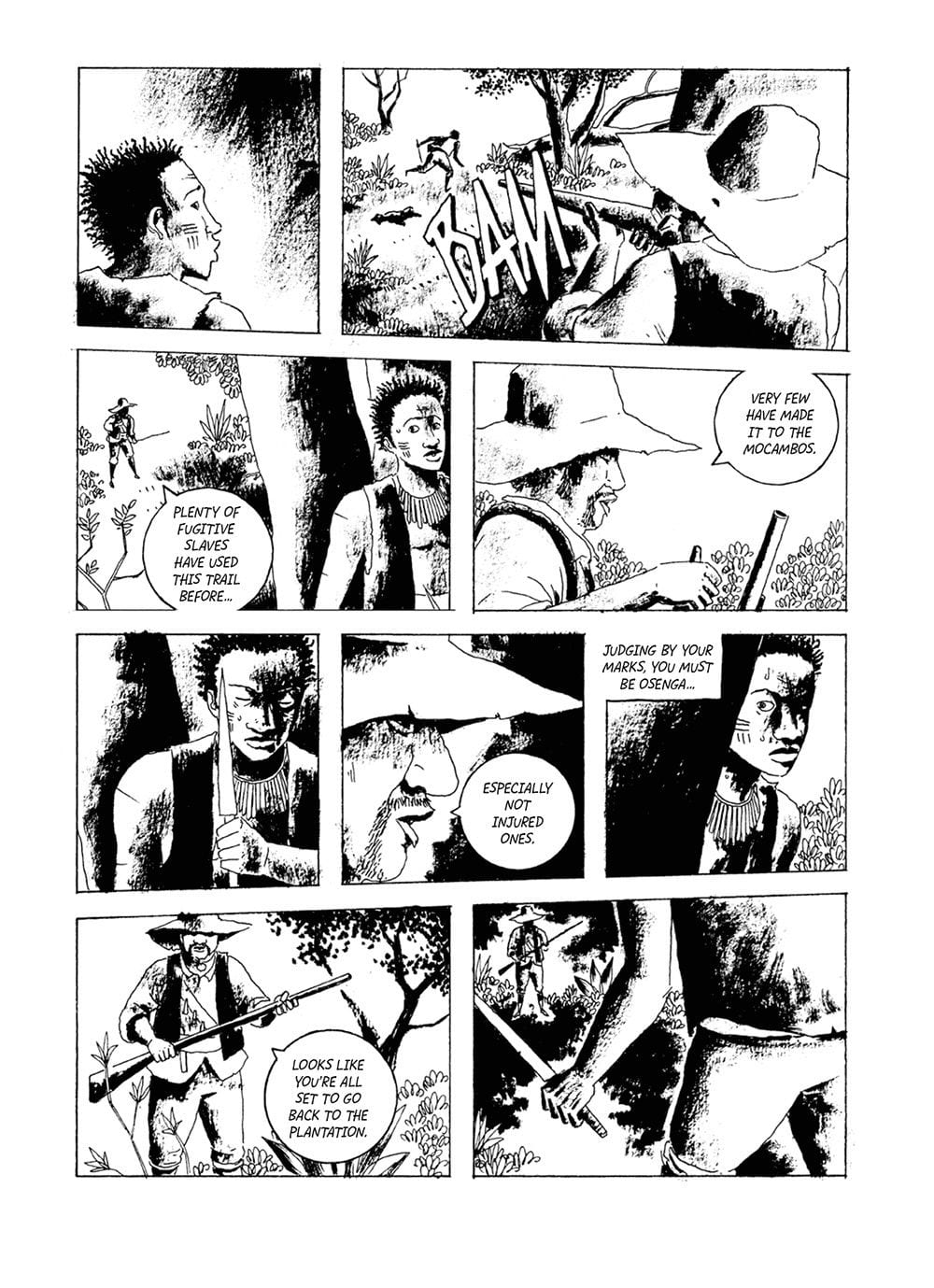 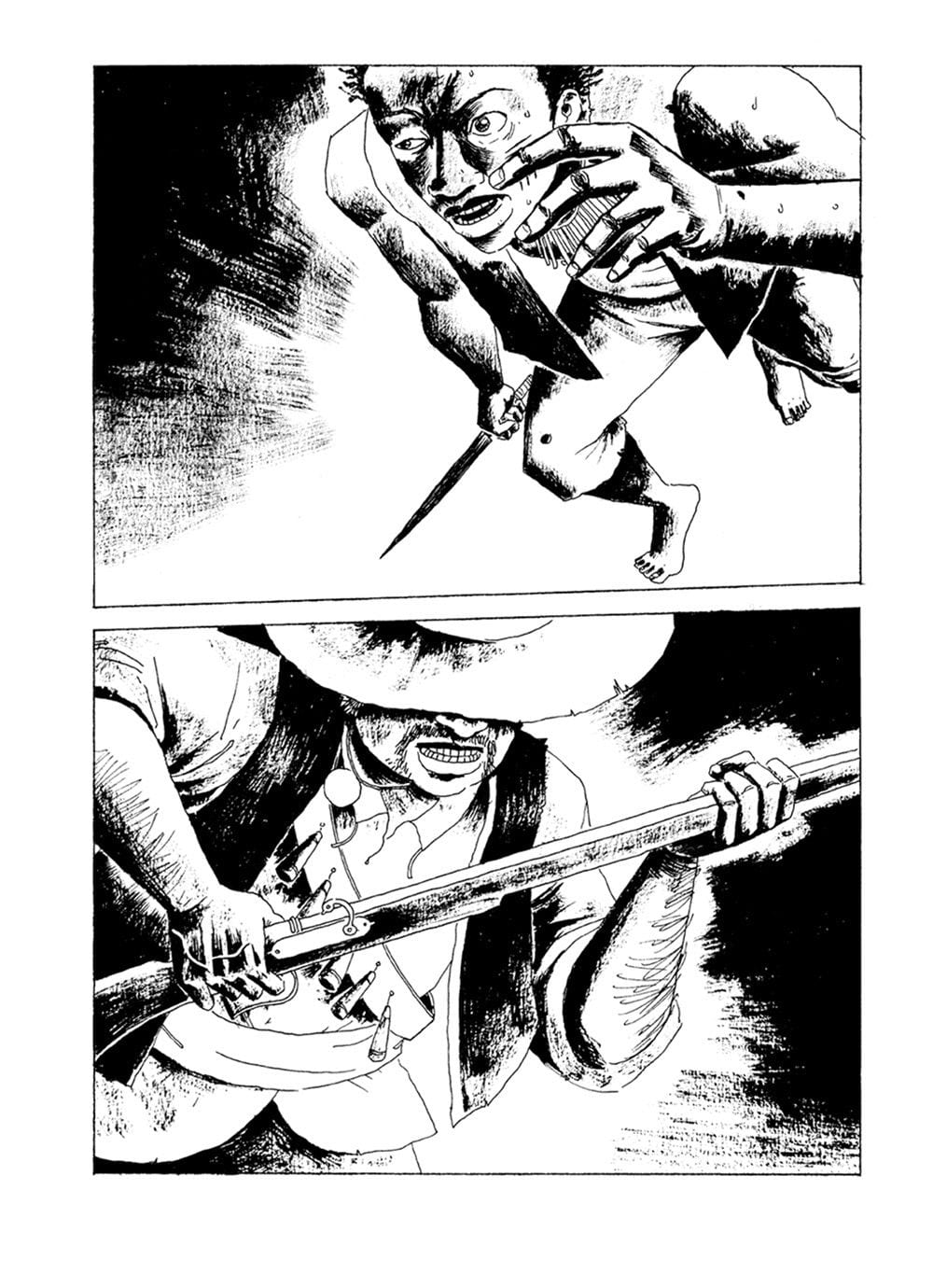 D’Salete’s other, multi-page braiding includes birds (how the points of their feathers visually rhyme with the carved points of trees in a fortress wall), whipping wounds (clusters of slashes juxtaposed with the tree branches of the surrounding forest), flies (both as victims of spider webs and later as visual metaphors for corruption), ocean waves (an idiosyncratic triangle pattern that later returns as scales on a snake), and flames (too many instances to mention).

But the first I noticed is D’Salete’s idiosyncratic smoke: the oddly dense shapes he draws curving from a plantation foreman’s cigarette as he eavesdrops on a dying slave owner’s promise to Soares (the novel’s main character) that he will be freed upon her death. A page later, in the same bottom left area of the page, the shapes repeat in the visual metaphor of a snuffed candle at her bedside when she is found dead in the morning. The foreman then ignores the dead woman’s will and keeps Soares enslaved.

The image returns almost 200 pages later in the smoke billowing from a village set afire by attacking soldiers—again in the bottom right corner panel. In each case, smoke is present in the story world—as it might also be if described in words in a prose-only novel—but the effect is different in the visual medium of comics, especially when rendered in D’Salete’s beautiful but un-flowing , un-smoke-like smoke style, linking the moments at a more visceral level because the images are experienced directly as actual ink marks on paper. Written language can’t produce quite the same effect. Within the story, the events—Soares cheated of his freedom and years later a village of runaways destroyed—are no more related than any other of a range of similarly horrific events, but the braiding pulls the two into contact, suggesting that they, like the nearly identical smoke patterns, are nearly identical too.

Though 426 pages long, Angola Janga can be opened at random, and a viewer will be rewarded by some visual element that D’Salete has carefully crafted into his artwork. He approaches his history with a similar narrative exuberance, crafting characters and events to fit the massive gaps left by colonial documents (which he quotes to excellent effect at the opening of each of the 11 chapters). Zumbi, the Palmares leader whom Brazil celebrates with a national holiday, receives an origin story as an orphan initially raised by a Franciscan monk, and the colonial strategy of dividing the fugitive community by partitioning a free town is embodied by the villainous traitor, Zona. The book designers apparently would like us to believe that Andala, a female warrior featured prominently on the cover, is central too, but I was disappointed to discover that she is only a minor character—despite D’Salete acknowledging in his afterword: “Women had a notable presence in Palmares.”

The collapse of Palmares is a historical fact D’Salete cannot avoid, giving his novel an inevitably tragic slant. But he copes with its reverberations well, drawing a brief, unexpected, and poignant leap into 21 st-century Brazil in his final chapter, before concluding with an extended sequence featuring one of his most effective braidings: the star motif that literally unites the cosmos with the spiritual plight of the people of Palmares. Since this is the first work by D’Salete I’ve read, I look forward to buying his 2017 translated Run for It: Stories of Slaves Who Fought for Their Freedom, while hoping that Fantagraphics releases more of his work, old or new, soon.