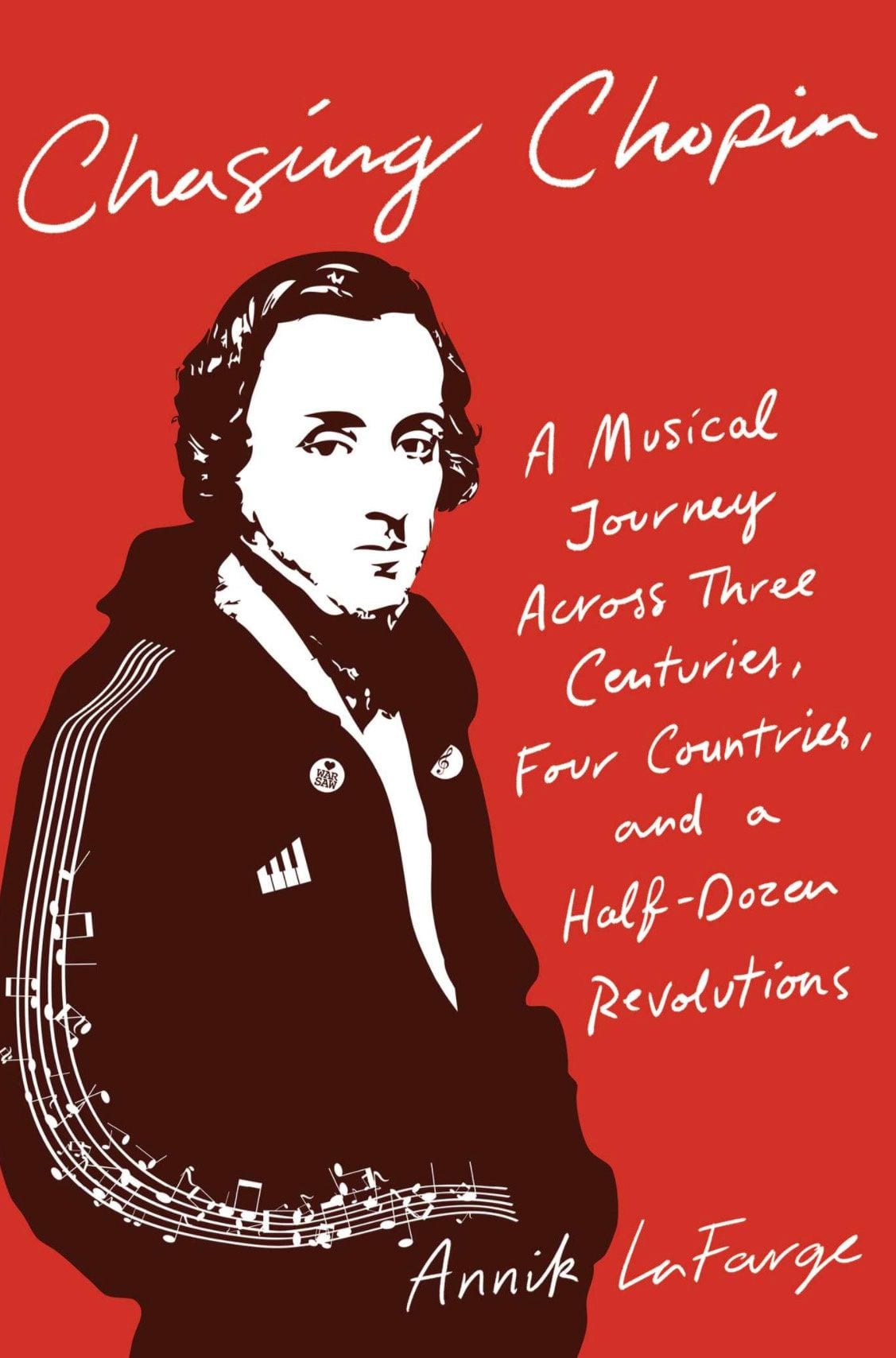 In Annik LaFarge‘s new book, Chasing Chopin: A Musical Journey Across Three Centuries, Four Countries, and a Half-Dozen Revolutions, Chopin isn’t the melancholic, tragic figure portrayed in literature and film. He is an innovator and outlier who forged “a truly modernist vision”, and an artist of enduring relevance. On the book’s cover, he’s pictured in what looks like an Adidas track suit (but the stripes down the sleeves are the lines of a musical staff) festooned with a pin that reads “I love Warsaw”. This makes sense, since Chopin not only renovated classical forms, but also, while in self-exile from Poland, developed a musical signature that made use of wild juxtapositions.

Chopin was ahead of his times, a modernizer who mixed styles and bent genres. LaFarge discovered his “special genius” while listening to the Funeral March (from the Opus 35 Sonata) being performed in two different settings, one formal (the Polish consulate in 1998) and one intimate (a jazz club in Chicago in 2017). At the performance in the Polish consulate, LaFarge heard all of Opus 35 played for the first time in her life. She experienced “a sense of awe” when she heard the Trio in D-flat major being “smuggled into” the third movement (the March in B-flat minor that we all know).

The Trio, she writes, is “hopeful, sweet, beckoning; a grown-up lullaby,” animating the death march with “a force of beauty. Of life.” She reflects, “What struck me…was hearing a piece of music that was so familiar but also so new. And so unorthodox: a funeral march that speaks the language of life as well as death.”

Nearly 20 years later, the performance in the jazz club surprised LaFarge because the famous March—dum dum da dum—began in the middle of “a swinging tune”, as a bit of improvisation. LaFarge was astonished by how “the language of the march was still there, but it’s been rhythmically transformed into a new vernacular.” Why, she wondered, did Chopin’s music still resonate so powerfully?

Inspired by the performances at the Polish consulate and Chicago jazz club, LaFarge set out to investigate the Opus 35 Sonata. Chasing Chopin is the outcome, and it’s more than an exploration of a famous piece of music. It’s a wonderfully smart, fascinating look at Chopin’s life and times. LaFarge focuses on the three years during which Chopin composed Opus 35 (1837 to 1840), but her investigation inevitably leads her back to the Poland of Chopin’s youth, to Paris as Chopin found it when he arrived in 1831, and to the French and Spanish countryside where Chopin did much of his composing while romantically involved with the feminist writer George Sand.

There are, of course, already several biographies of Chopin out in the world. LaFarge’s slim book—only 160 pages—stands out because it’s a hybrid work—biography and journalism—with utterly lovely, vivid descriptions of Chopin’s music. It’s all the more compelling because LaFarge looks carefully at the circumstances that made the composition of Opus 35 possible. She considers the changing technology of the piano, for instance, that allowed Chopin to “capture a new universe of emotional color.”

She also probes the complicated Chopin-Sand love affair, which lasted nine years and perhaps enabled Chopin to produce works of genius, including Opus 35, as his health was failing. Sand made sure that Chopin always had “the best conditions to create.” She also famously nursed Chopin back to health numerous times. She was so nurturing that Chopin referred to her as “my angel” in letters home.

Eugène Delacroix – based on (now separate) portraits of Chopin and Sand, which were divided in the late 19th century (Public Domain / Wikipedia)

The 19th century history in this book is seamlessly interwoven with the journalism exploring Chopin’s sound and message. LaFarge moves between the past and present seemingly without effort. She veers, for example, from the story of how Chopin learned to play the piano (he was largely self-taught, though he had two influential teachers) to her excursion to New York City’s Morgan Library, where she views Chopin’s never-published book on piano method.

In another chapter, she writes about the Chopin-Sand relationship before chronicling her own trip to Majorca, Spain, where she discovers the landscape that may have influenced Chopin’s work in general. She suggests the Spanish landscape provides context for “the exquisite juxtaposition of tenderness and violence, hope and despair, darkness and light” in many of Chopin’s pieces.

Although this unusual book takes many detours, Opus 35 is LaFarge’s primary focus. She reports on what makes Opus 35 so powerful, groundbreaking, and contemporary. I can’t sum up her revelations here, but I can point to a few highlights. In an early chapter, she writes about how the great sonata imparts Poland under Russian occupation. Most people who love Chopin know that he grieved his homeland and famously said “I pour out my grief on the piano,” but few know how he inscribed his love of Poland on Opus 35 in particular.

In another chapter, she writes about how Opus 35 was influenced by Beethoven’s Opus 25 Piano Sonata in A-flat major, a work that completely abandons the sonata form. Later in this chapter, she writes about how, before Chopin gave Opus 35 to his publisher, he crossed out the word funèbre, leaving just the word marche at the top of the third movement. This has left scholars to wonder whether the most famous funeral march in the world is a funeral march at all.

LaFarge is well aware that Chopin has been viewed as “a snob, a dandy obsessed with fine clothes and aristocratic ways, a man who didn’t read books or show much interest in other artists, melancholy, short-tempered, and (perhaps) anti-Semitic.” In her book, she doesn’t attempt to rescue Chopin from this reputation, but her precise description and thoughtful analysis of Opus 35 somehow do that job.

Chopin emerges in these pages a fiercely independent artist, a virtuoso with a “playful, roguish sense of humor”, an ingenious musical trailblazer who “coaxed large meanings from the smallest forms” as he created a new musical language. If only all the great composers could be reintroduced to us in this fashion.