It’s a credit to mastermind Kevin Feige that each of the superhero cliques within Marvel’s sprawling Cinematic Universe (MCU) has a distinct personality. The Guardians of the Galaxy are irreverent and morally… questionable. The Avengers are larger than life and eager to save the world. Now two films into the Ant-Man story, it appears that director Peyton Reed‘s breezy creation intends to stay rooted in comic book goofiness.

And why not? This is the story, after all, of a man who can shrink to the size of a Matchbox car or tower over tall buildings with the push of a button. It’s silly to expect anything approximating drama from a man who rides flying insects and uses giant Pez dispensers to thwart his foes. What you can expect is plenty of ingenious sight gags involving shrunken objects, and more importantly, further expansion upon the Quantum Realm that promises to play a huge role moving forward in the MCU.

What’s immediately refreshing about Peyton’s film is the simplicity of the storyline. Hank Pym, haunted for years by a mission gone wrong, wants to rescue his doomed wife Janet (Michelle Pfeiffer) from the Quantum Realm. While there is plenty of nonsense swirling around the periphery, including a phase-shifting baddie called Ghost (Hannah John-Kamen) who wants to steal Pym’s tech, this is a modest rescue story that has no intention of saving the world.

Action set pieces utilize the miniaturization conceit to its maximum potential. Characters dance across knife blades and use flatbed trucks as glorified skateboards in CGI showcases that still emphasize ingenuity over videogame laziness. We can agree that car chases are boring — accept when the hero’s car can shrink beneath the villain’s car and then expand skyward like a rocket launcher! Peyton uses objects and critters of all shapes and sizes to keep things fun. 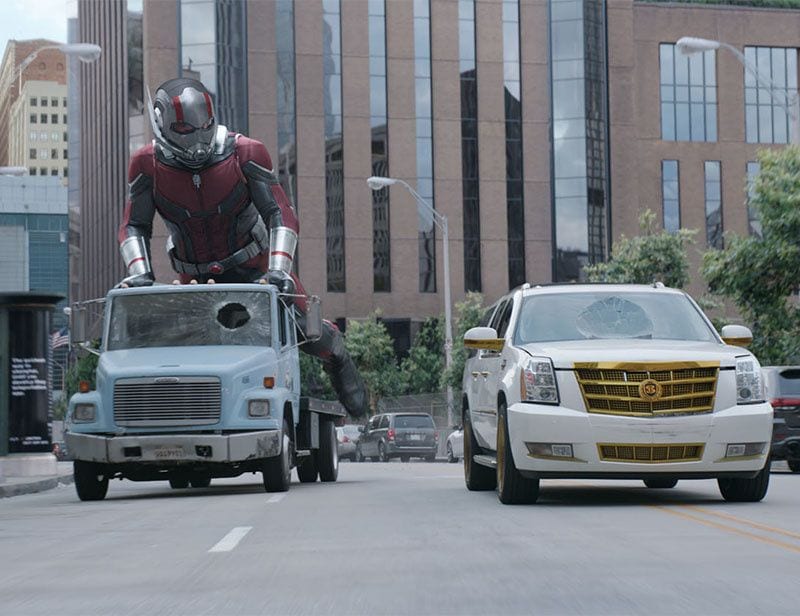 Where Ant-Man and the Wasp stumbles a bit, like its 2015 predecessor, is with the casting. Everyone loves Paul Rudd, which makes this admission feel all the more sacrilegious: he’s just not a good ‘fit’ for this role. Perhaps Peyton’s lively pace is clashing with Rudd’s laidback charm? Maybe Rudd is just too cerebral and quick-witted to carry such a ridiculous premise? Unlike other MCU entries, maybe the characters in the Ant-Man universe aren’t engaging or well-drawn enough to cultivate all of the comic possibilities? Whatever the reason, Rudd continues to feel like the awkward kid on stage who doesn’t know what to do with his hands. He’s not bad; he just doesn’t elevate the material, which is so not Paul Rudd.

It’s also shocking that a talented writing crew (which includes Rudd) could whiff on so many one-liners. For every joke that connects, there are probably three jokes that fall flat. Compare this to 2017’s Thor Ragnarok, which lands an absurdly high percentage of quips and zingers, and the writing here feels flabby. Several obvious attempts at improvisation are particularly painful. When Scott and his new business partner Luis (Michael Peña) debate the proper usage of the saying, “Land this fish,” it feels so forced that you wonder how this scene survived to final cut. 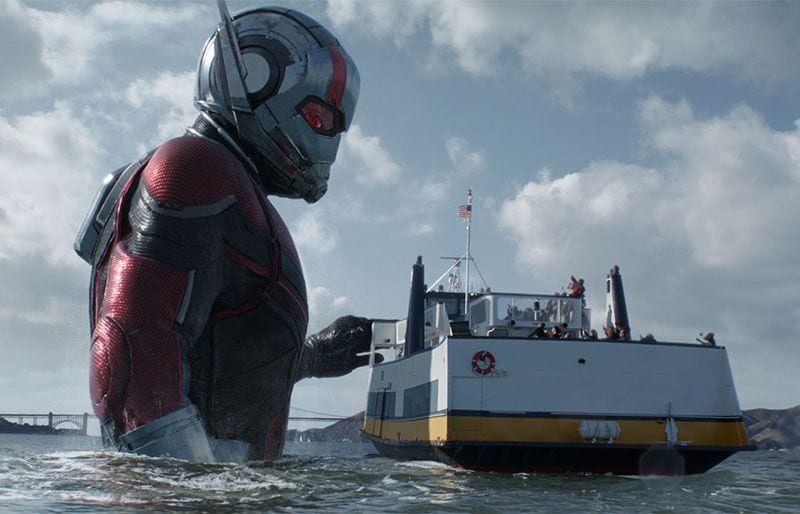 Luckily, the supporting cast, especially Peña, feel nice and comfy in their roles. Walton Goggins (as the unscrupulous tech trader “Sonny Burch”) and his cadre of incompetent henchmen try their hardest to be menacing, with hilarious results. Laurence Fishburne is also solid, though underutilized, as Pym’s old partner, Bill Foster. But Peña continues to be the comedic gift that keeps on giving. His frenetic style fits the material perfectly, as he cracks off one-liners and non sequiturs with alarming precision.

Ant-Man and the Wasp is a comparatively modest film that puts a premium on fun. After the bombast and revelations of Avengers: Infinity War, it serves as a gentle re-introduction into this world… until the crackerjack post-credit stinger (don’t leave early!). Ultimately, this film should settle somewhere in the middle of the ever-expanding MCU canon. With such a strong track record for quality, that’s certainly no disgrace.