Marvel Cinematic Universe movies have been dominating the box office for a decade now (oh, how time flies), and audiences have become accustomed to counting on Marvel Studios to deliver fun, flashy blockbusters that send them home smiling. But this past April, mega-crossover Avengers: Infinity War broke hearts across the world, ending on an uncharacteristically somber, tragic note that left moviegoers reeling from shock and sadness.

Mercifully, Marvel’s next offering, Ant-Man and the Wasp, acts as a welcome respite from the high drama and mass-murdering of Infinity War. It’s a dazzling, fast-paced, outrageously funny superhero romp that feels more cohesive than its 2015 predecessor, Ant-Man, which infamously switched directors from Edgar Wright to Peyton Reed part-way through production. The story isn’t as heartfelt this time around, but the action, humor, and top-notch cast firing on all cylinders makes up for the lack of tenderness.

Paul Rudd stars as Scott Lang/Ant-Man, and again, he anchors the movie with his impeccable comedic timing and irresistible, self-deprecating charm. Ant-Man (2015) is a comedy-caper film that buoys every scene, from the inventive fist fights to the more dialogue-driven moments, with Rudd’s charisma, and the same is true for the sequel. Rudd is one of those rare talents, like Cary Grant and George Clooney, who’s blessed with leading-man good looks but has no problem making a fool of himself at any given moment. His willingness to poke fun at himself is his greatest strength as a performer, and Reed is keenly aware of this, constantly putting Scott in humiliating situations, giving Rudd ample opportunity to endear himself to the viewers as only he can. His “Does anyone have any orange slices?” quip was one of the most bizarre, hysterical one-liners from Captain America: Civil War.

That movie saw Scott help Captain America/Steve Rogers and his team of super-powered rebels take on Iron Man’s law-abiding Avengers, an excursion that landed him in prison, a place he was all too familiar with as an ex-con. Ant-Man and the Wasp takes place over the last three days of a two-year house arrest sentence Scott has, so far, served without incident. He hasn’t spoken to the original Ant-Man, Hank Pym (Michael Douglas), or Hank’s daughter, Hope Van Dyne/The Wasp (Evangeline Lilly), since the Civil War debacle (which made them fugitives by association), but when he starts seeing visions of Janet Van Dyne (Michelle Pfeiffer), Hank’s wife and Hope’s mom, who disappeared into the “quantum realm” 30 years ago, Scott’s former partners in crime begrudgingly ask for his help to bring back their long lost matriarch.

The ensuing heists, fight scenes, and car chases through the hilly streets of San Francisco make up the bulk of the runtime and are all thoroughly inventive and entertaining, though not exactly thrilling. There’s a lot of humor infused into virtually every moment of the movie, which is good, but the constant stream of laughs have a sort of dampening effect on certain moments of peril that would otherwise be incredibly tense. It’s hard to say if this is such a bad thing, considering the humor is so strong, but the imbalance is certainly noticeable during the most dramatic moments, none of which are as touching as they are intended to be. 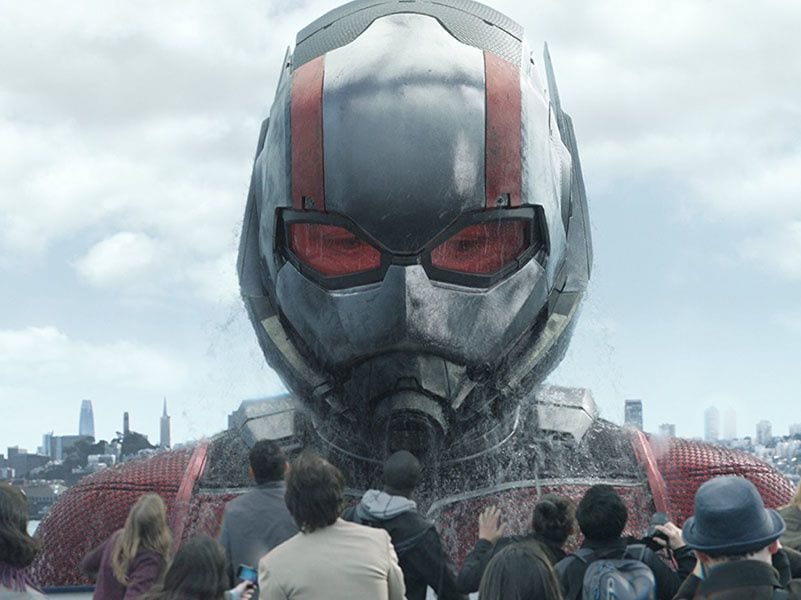 Hank and Hope spend a lot of time talking about Janet throughout the movie, but it’s hard to feel their longing/grief when you’re constantly expecting every other line to be a joke or one-liner from Scott. But that’s not to say the humor is unwelcome; the effectiveness of the comedy far outweighs the ineffectiveness of the drama. Lilly and Douglass are the perfect straight men for Rudd to volley with, and the supporting cast overachieves, some of them getting the biggest laughs in the movie. Randall Park plays an FBI agent hellbent on catching Scott with his pants down (figuratively and, perhaps, literally), and Michael Pena reprises his role as Scott’s best friend and fellow ex-con, Luis, whose superpower of sorts is the ability to stretch out even the most mundane, simple anecdote to ungodly lengths. Either one of these actors’ performances would have made the movie worth watching alone, but to have both in top comedic form alongside Rudd takes it over the top. It’s a fantastic cast.

Ant-Man’s ability to shrink down to, well, bug size, as well as grow as big as a building, is as pervasive and integral to the film as the witty banter. Scott’s suit malfunctions on several occasions, at one point awkwardly shrinking him to the size of a five-year-old at his daughter’s high school (Deadpool 2 offers a similar gag, but this version is more clever), and later ballooning him up to Goliath proportions, taking a toll on his body and leaving him unconscious at the bottom of the San Francisco Bay. Each action and fight scene sees Ant-Man and the Wasp oscillate between tiny and big frequently, a clever device that keeps you on your toes. Seeing the action play out on different scales is a lot of fun: The Wasp shrinking down and running the length of a chef’s knife thrown at her by a thug is badass, and seeing her take out a bunch of baddies on motorcycles with a giant Hello Kitty Pez dispenser is insane in the best way possible. 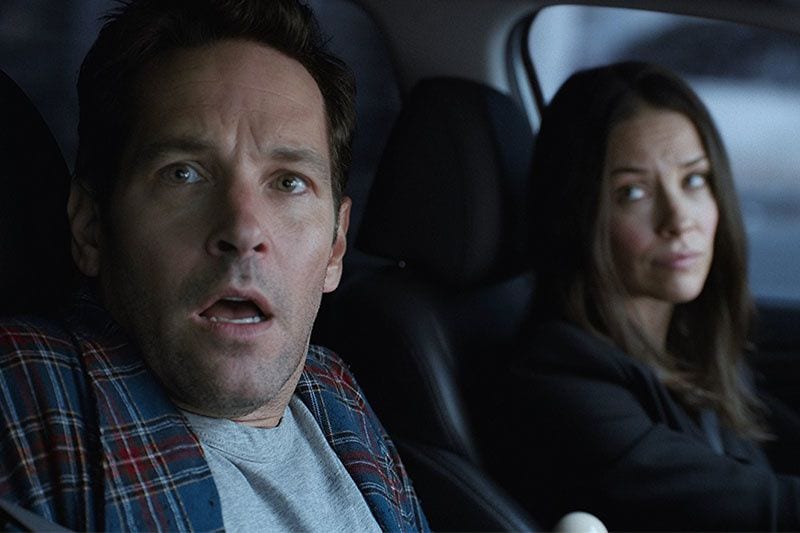 There’s one major annoyance to Ant-Man and the Wasp that will likely rattle around in your head as the story unfolds, and that is that Hope/The Wasp actually doesn’t play any larger of a role in this movie than she did in the first one, despite sharing top billing with her male counterpart. Scott is still very much at the center of the story, and almost the entire movie is seen from his point of view, and almost never hers. Sure, she gets to crack some skulls here and there, and she’s clearly a lot cooler than Scott, but we never get to step into her shoes. In fact, Hank gets more solo screen time than his daughter. This is a shame when you consider that, aside from Black Panther, every MCU movie has been about a white man. Surely one would think from this film’s title that we’d finally see the MCU from a female perspective, but alas, it’s yet another missed opportunity. Hopefully, next year’s Captain Marvel, starring Brie Larson, will remedy the Marvel Studios’s glaringly sexist convention.