British cinema has been most famously disregarded by director François Truffaut who, evidently unbothered, muttered: “The British cinema is boring, and reflects a submissive way of life, where enthusiasm, zeal and impetus are quickly rooted out. The film is a born loser just for being English.”

This article does not set out to whimsically ponder the nature of the British film, but rather, in looking at a gem from 1929, to put a grenade, or at least a banger, in the end of Truffaut’s pipe. The gem I refer to is a remarkable piece of silent filmmaking from the very end of the silent cinema era. It merges Hollywood melodrama with European art film and, whilst being cripplingly modern, exceeds its time and strikes the contemporary spectator with its innovative structure and narrative complexity.

This movie is called A Cottage on Dartmoor, also known as Escape from Dartmoor (currently available to watch online on BFI Player) . It was written and filmed by Anthony Asquith, a man most known for his 1950s adaptation of Oscar Wilde’s play, The Importance of Being Earnest, a secondary school compulsory watch, with its staged settings and classical style of literary adaptation. The very same Asquith — 30 years prior to laying yet another brick in the British film’s wall of salutes and bows to the national literary heritage, out of rebellion against his respectable family –started to dabble in the unrespectable art that cinema was considered to be at the time. Soon he would be able to pride himself on being on the edge of the British film thought with his debut, Shooting Stars, in 1927.

Asquith jumped into the art of cinema when it was beginning to grow out of its restricted function as pure entertainment, at around the same time as the birth of the cinema’s avant-garde and the origins of film criticism. In his final silent feature, A Cottage on Dartmoor, set within a conventional dramatic narrative, he dabbles in all that the cinema had on offer, rendering a fascinating picture of light and profound emotional and intellectual “touch”. 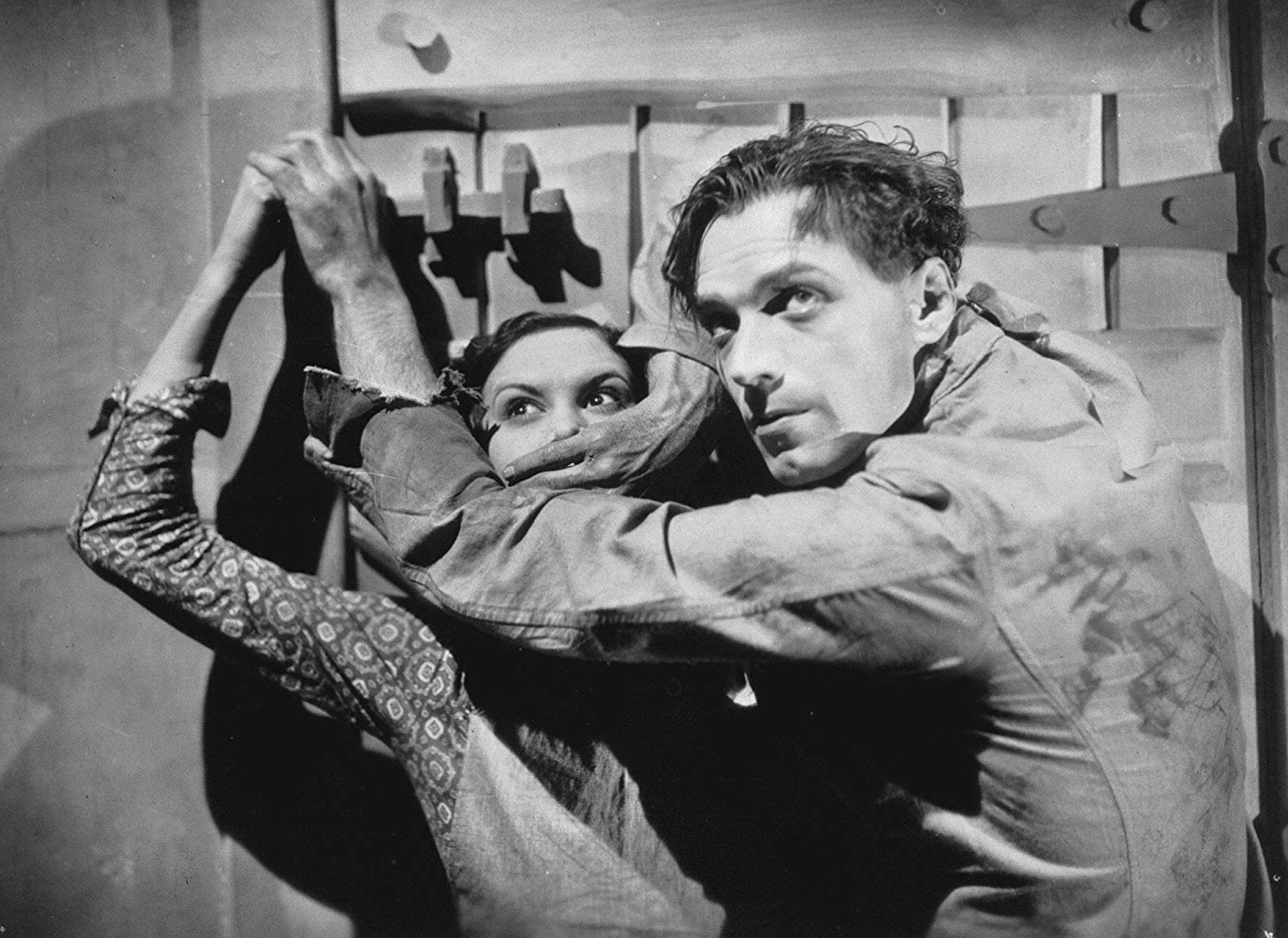 Norah Baring and as Sally Uno Henning as Joe (IMDB)

Asquith was fascinated with the French impressionists’ preoccupation with the still, singled out expression. He was also taken by the inventions of Soviet montage, the mood of German expressionism and the pace and tension of Hollywood hits. In A Cottage on Dartmoor he creates a mosaic masterpiece, in control of the cinema’s tools and thoughts, which he employs impeccably to tell a complex, layered, and thought-provoking story, features which are reinforced by the movie’s silence.

A Cottage on Dartmoor is the story of Joe, a barber in love with his work friend, Sally. The story is told through flashbacks, taking off at the point where Joe flees the prison and runs across the meadows of Dartmoor. He faces terrified Sally in her home, holding a baby. The eerie atmosphere, Sally’s fear and Joe’s madness, are sketched with deep shadows entrapping Joe’s threatening figure as he stares at Sally with unforgiving fury; the stare enforced on the audience via the use of a rapid close-up on Joe’s face. Sally exclaims his name and the subsequent shot takes us back in time to a salon, where Joe’s face is veiled with a charming smile, lit in the low-key Hollywood lighting. “Yes, Sally?” he responds.

This striking spatial, temporal and formal intercut, establishing the story, already shows Asquith’s mastery of form and innovative thinking. The opening sequence takes away the melodramatic climax, which otherwise could have been classically achieved. The narrative climax here is internalised not externalised in the character’s actions.

Asquith’s examination of Joe’s face, which is the key focus of the camera, is juxtaposed to good effect with the faces of Sally and Harry. Through intensified, prolonged shots of his emotional collapse and subsequent regeneration following Sally’s forgiveness, Asquith takes the tension away from the characters’ actions and places the tensions instead on their inner psyches. This echoes individualised tales of the romantic tradition, making Joe’s complex emotional development and its consistent ambiguity key to film’s narrative and form, as opposed to Hollywood’s emphasis on an individual’s actions and lack of ambivalence. 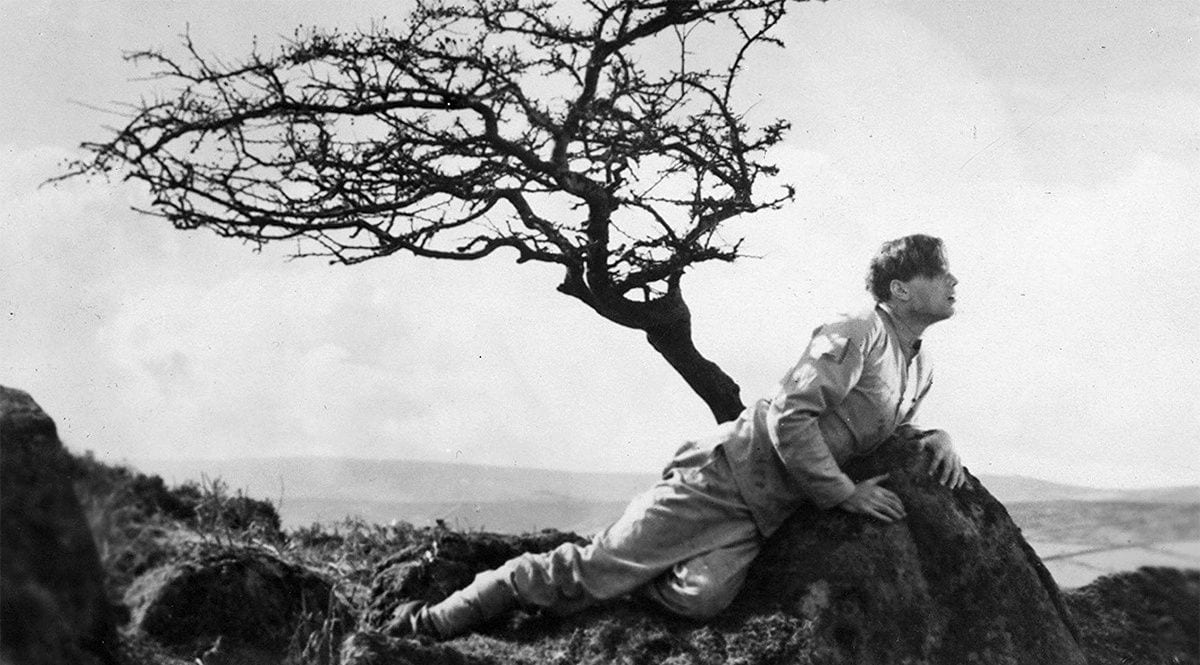 The romantic hero, doomed to fail, is further expressed through the romantic mise-en-scène, impeccably composed by Asquith, which vividly evokes the dramatic paintings of Caspar David Friedrich; one’s confrontation with the wilderness of the world, one’s fear and desire at a heightened dramatised moment, fully employed at the closing sequence as the shots of Joe running towards the cottage are intercut with the shots of the rough sea, eventually unified with him, as he falls down, despaired and ready to die, for he has no reason to live without his love.

The figure of Joe resonates with the most emotionally sketched and clinically analysed literary figures of the previous centuries, with Joe’s abundance and force of expression immediately bringing to mind the desperation and savage despair of Goethe’s Werther, or the tortured mind of Dostoyevsky’s Raskolnikov.

A Cottage on Dartmoor stands out on a variety of formal levels, most importantly through its use of montage, which tends to be intellectual, drawing abstract conclusions through visually intercut segments, sweeping us through the mundane conversations at the barber’s across horse races and cricket games, seeking and capturing excitement in the ordinary. Asquith’s montage grasps Joe’s feelings, fleets of emotion, unable for a human expression to convey and unspeakable in its literary form in its rapid and fragmented temporality. It continuously astounds with its open and innovative structure, subtly opening up the new means of interpretations, bravely exploring its cinematic properties.

The use of intertitles is particularly striking. Used scarcely, they thoughtfully serve different purposes. Unlike in the vast majority of silent films, they do not merely convey the meaning; however, they always encode it. The intertitles are certainly not employed to remove the possibility of the narrative ambiguity and simply serve a clearer understanding. Asquith seems to manage to avoid most conventional uses, employing intertitles to his own aesthetic effect.

In the initial sequence, they reinforce the effect of the montage. They enhance the mood and evoke a certain nostalgia through the poetic repetition of “Would you like to go with me to a-talkie tonight?”, capturing the sentimentality of the early sound films in its silent expression. Asquith meticulously applies them in such a way as to reveal the most crucial details, finding non-verbal means of filmic communication. The intertitles tend to inform us of facts, or explain the film’s causality, rather than express any emotional state or the characters’ thoughts or feelings, which are externalised through the elaborate use of cinematography and setting.

The camera movement seems particularly crucial in relation to Joe and Sally who, despite being the film’s leading characters, are the ones deprived of most verbal communication with an aid of intertitles. The ambiguity of Sally and Joe’s feelings for each other is one of the narrative’s many strengths, consolidated by the silent medium. It is the potential, the fragment of the love story that was never articulated, never told, caught in the splits of seconds of single shots, merely expressed through cinema’s most fragile yet powerful subtleties of camera movement and silent expression of close-up and mise-en-scène, that make the story of Sally and Joe painfully compelling and beautifully truthful.

The final critical acclaim goes to the acting, particularly to the mind-bogglingly forgotten star of Uno Henning, who excels in his gripping portrayal of Joe. Henning skilfully incorporates both the theatricality of the silent era as well as a natural, almost casual style, expressed in the most intimate moments, such as his encounter with Sally’s child or his presumed defeat as the prison guards knock on the door. Henning masters the essence of the impressionist, emotional, facial acting. The whole weight of the film’s dramatic tension is seen in his face through the course of the narrative.

Found, saved, remastered and redistributed in 2007, A Cottage on Dartmoor is a diamond of the British silent era, standing proud amongst the worldwide releases of its time, its modernity found in its relevance to today.