An unassuming man (Jesse Eisenberg as ‘Casey’) quietly reads his newspaper in a typical American diner. In the booth next to Casey, a beautiful young French couple openly mocks him, shrouded by the anonymity of their unfamiliar language. Moments later, Casey sits in his car listening to an audio instructor recite phrases in French. In a flawless dialect, Casey repeats, “I don’t want any trouble, sir. I’m just a tourist.” It seems Casey is destined to absorb ridicule, even when it’s in a foreign language.

Director Riley Stearns makes Casey the perfect vehicle to indict hyper-masculinity in his hilarious new black comedy, The Art of Self-Defense. Stearns’s second feature mines similar territory to David Fincher’s brooding classic, Fight Club (1999). Both films are fueled by the self-loathing and mental decline of their heroes, but The Art of Self-Defense employs a broader perspective, both thematically and comedically.

Gags in Fight Club end with a punch, while the gags in The Art of Self-Defense end with a punchline. The result is a wild haymaker of a film that sometimes connects with a deeper social subtext and sometimes falls flat on its narrative behind. Thankfully, it’s funny enough to compensate for these inadequacies and delivers one hell of a knockout in the final act.

Most people know that the alpha male is the leader of the pack. They may be unfamiliar, however, with the opposite end of the ruling hierarchy; the lowly omega male who endures unimaginable cruelty from the entire pack. Casey resides somewhere below the omega male’s personal valet. He shambles along the sidewalk to the non-existent beat of whatever Adult Contemporary song is droning in his brain. A bundle of twitches and pregnant pauses, Casey delivers each syllable with strenuous precision, conditioned by the bullies of his past to anticipate physical and verbal reprisals. He is a punching bag in search of a fist. 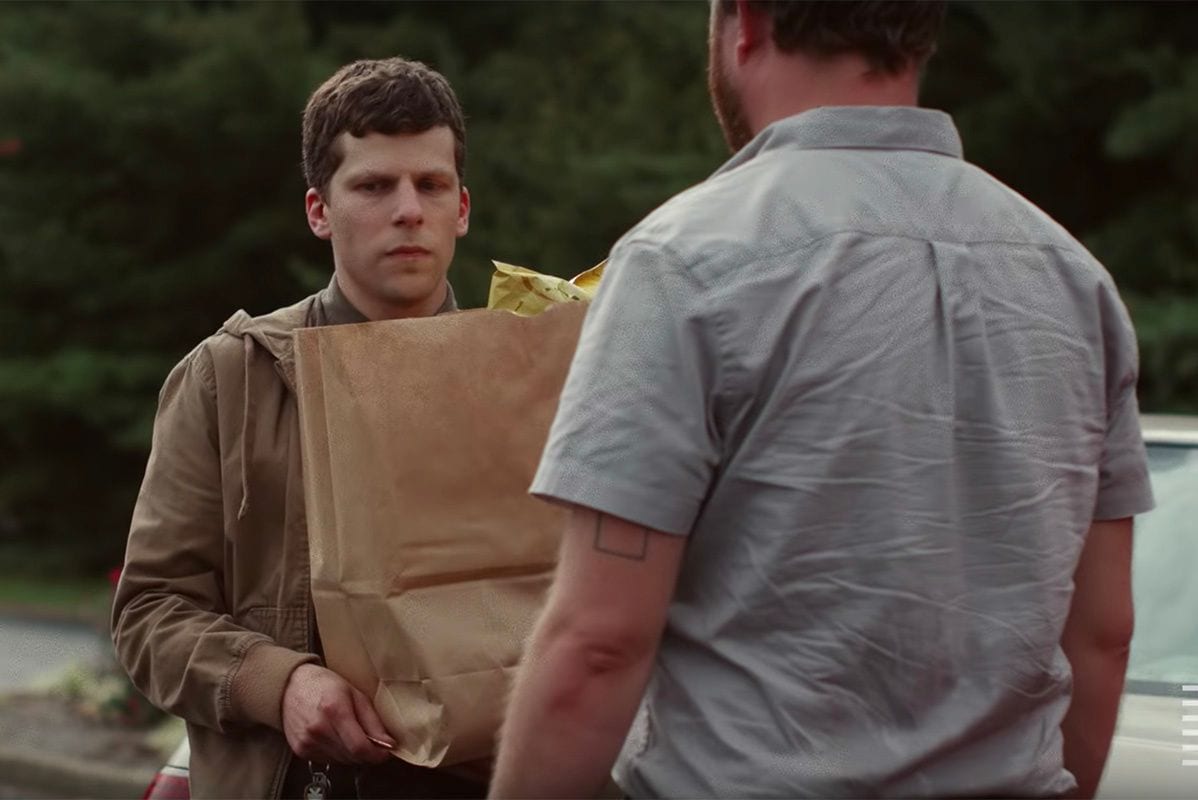 Casey finds an entire gang of fists when a bunch of motorcycle hooligans beat him into unconsciousness while on his way home from the grocery store. After a short hospital stay, he indulges his growing obsession with self-defense by taking a trip to the gun shop (where he requests to purchase “a gun I can hold in my hand”) and a karate dojo. There, he’s mesmerized by a charismatic Sensei (Alessandro Nivola) who preaches an ultra-violent karate philosophy to his obedient gang of alpha-males-in-training. He’s reminiscent of the evil sensei from The Karate Kid, only he’s less likely to “sweep the leg” than just snap it like a twig.

The first half of The Art of Self-Defense is a slow-burning character study. Stearns (Faults, 2014) establishes Casey as the classic 98-pound weakling in search of his mojo, and then throws you off balance with a series of clever twists. There’s the obligatory montage of Casey mastering his karate and earning his yellow belt, for instance, only to have him hilariously crumble at the first sign of adversity. When Casey meets the plucky kid’s karate instructor, Anna (Imogen Poots), you’re expecting an awkward romance to blossom. Those thoughts quickly evaporate when the merciless Anna throws a pudgy student into a headlock and chokes him the hell out. “Tap or take a nap,” she advises her karate proteges.

Most of the laughs in these early sections come courtesy of Eisenberg’s uncanny comic timing. This is his richest performance since The Social Network. He sidesteps the smarm and self-reflection of Edward Norton’s protagonist in Fight Club in favor of likeability and self-loathing. Whereas Norton’s character created Tyler Durden to fill his masculinity gap, Casey is an easy target for re-programming by Sensei. That Casey, who spends his evenings canoodling with his adorable dachshund puppy on the couch, remains likeable despite a growing list of misdeeds in the film’s second half, is a tribute to Eisenberg’s ability to make awkwardness endearing. 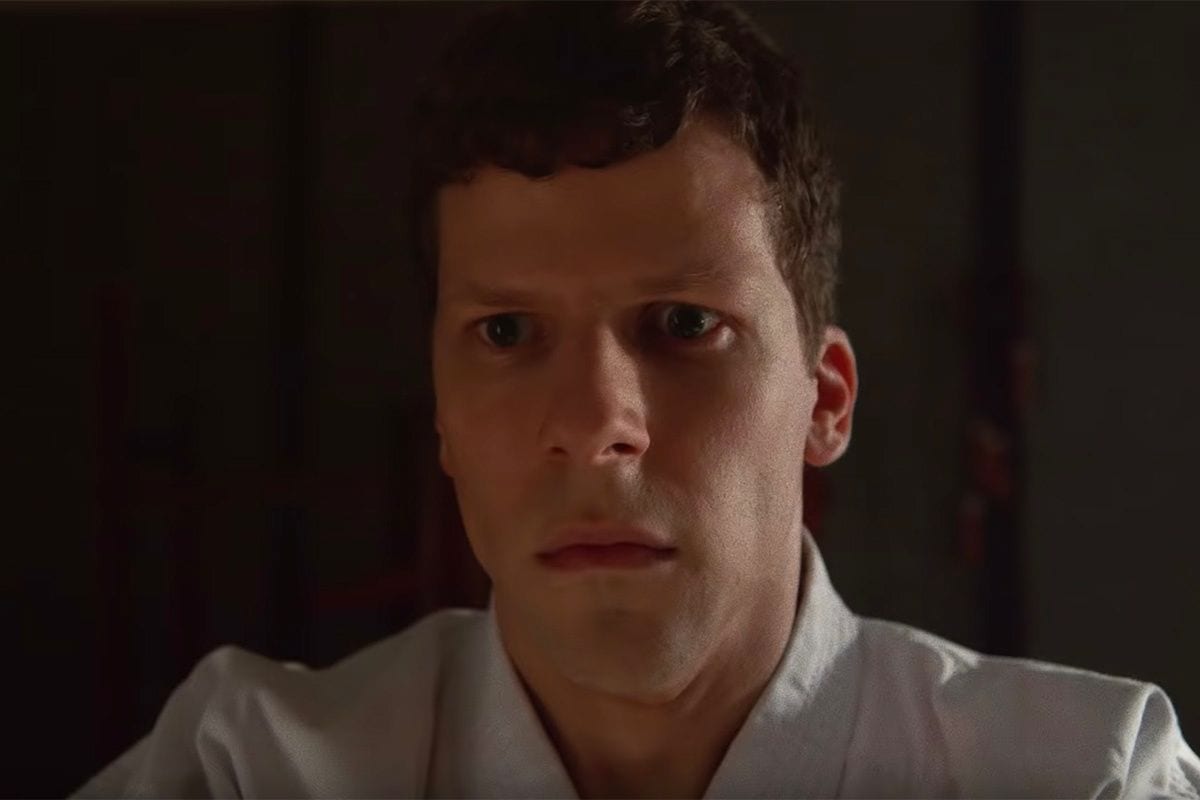 Once the slow-burn is over and Casey embraces his inner toxic male, the tone shifts from The Karate Kid to Nightcrawler in a big hurry. The true aims of Sensei’s dojo surface and new revelations completely shift Casey’s self-perception to that of a bullying thug. Though his transformation is too rushed to feel organic and much of the frenetic action doesn’t make sense, the final act of The Art of Self-Defense culminates in an exquisite ballet of broad comedy and white-knuckle tension.

This tonal shift at the film’s midpoint creates the strange sensation of watching something completely original and derivative at the same time. We’ve seen these characters and situations before, but never in this peculiar combination. It also makes us question Stearns’ thematic intentions. Moments of extreme anxiety are defused with wacky gags that seem to embrace the very mindless aggression that Stearns is condemning. When the final credits roll, you know the filmmaker has made a statement, but you aren’t quite sure what it is.

There is certainly a great deal of reflection on gender. Unfortunately, Anna is too damaged to provide the insight and emotional exploration that might focus Stearns’ script into a cohesive diatribe. Or, perhaps, her impenetrability is entirely the point. As she endures the unrelenting physical and psychological punishment from her classmates, you can’t help wondering why she stays at the dojo. The answer, as any woman can attest, is simple; what choice does she have? Like all women in society, Anna must navigate the unfair and dangerous terrain that men have created. When she warns Casey that “This isn’t a safe place,” she isn’t just referring to Sensei’s dojo.

The Art of Self-Defense is bound to frustrate those looking for succinct social commentary. Whether it fails to provide this clarity on purpose or through accidental narrative oversight is debatable. Still, it’s a successful provocation and a damn funny one at that. This movie has ‘cult classic’ written all over it.