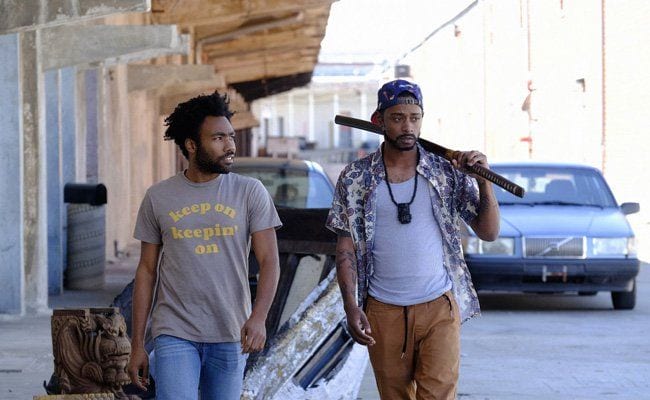 Atlanta‘s fourth half-hour feels like a Richard Linklater character piece: the narrative is sparse, and feels largely self-contained. Earn’s (Donald Glover) money troubles persist, but until the plot’s climax, it’s easy to get lost in the web of bartering that Darius (Keith Stanfield) spins for him, while Alfred (Brian Tyree Henry) battles with human Vine loop Zan (a surreal Freddy Kuguru), after an awkward encounter outside a club. The opening’s hilarious, but the rest of “The Streisand Effect” is less concerned with outright comedy and more about showing us what life is like for four vastly different characters in the show’s universe.

Pacing has been essential to Atlanta, and this episode continues the series’ commitment to working methodically in building a world that’s equal parts relatable and addictively absurd. In terms of Alfred’s rap career, the show thrives at capturing the sense of frustration that comes in today’s nihilistic hip-hop scene. There isn’t going to be an Entourage moment where Alfred receives a no-strings-attached co-sign or his single “Paper Boi” graduates from a local hit to the national level without some sort of setback. Whether or not it’s played for comedy, there’s plenty of sacrifice in the world of Atlanta, and as Alfred tells Zan, making music for him is less of an option and more of the option.

Making a Twitter beef the episode’s central drama is a risky call, simply because an Internet-centric episode of television isn’t always as compelling as one set in the real world, but “The Streisand Effect” offers tantalizing small details to make the phone-centric scenes worthwhile, whether that’s Alfred’s furious, full-body texting, or the fact that Zan likes his own posts and owns the handle “@zanlivesmatter”. The episode’s depiction of social media doesn’t feel gimmicky or distracting because it’s played as a natural extension of Alfred’s persona; he’s self-conscious in contradictory ways — he wants to be seen as street but he also doesn’t want to be unfairly vilified — so naturally he wouldn’t be able to look past Zan’s taunts.

Additionally, the character of Zan is also nearly perfect chaotic evil; he’s Loki with an iPhone. Kuguru’s performance is mesmerizingly off-kilter; he’s playing a character with plenty of energy but no charisma, and just when he seems like he’s going to be redeemed, he reveals that the kid in the back of his car during a ride with Alfred is not his son but his business partner. There’s some mutual respect earned between Zan and Alfred by the episode’s end; both are hustlers first and foremost, but he’s still far from a sympathetic figure by the end of his inaugural appearance.

Atlanta‘s been terrific at populating its background with characters you want to linger on — bar owners, men in jail, wait staff — but Zan is the first one who’s as engaging as the show’s principals. It’s unclear if the character will return, but he’s a fascinating foil, even if the social media hook will likely grow a bit tired.

The episode’s B-plot concerns Earn and Darius’s quest for a quick buck, which begins with them pawning a cell phone and ends with them breeding Cane Corso puppies as part of a can’t-miss investment opportunity. It doesn’t do much for Glover’s character besides further emphasize his dire financial straits and need to provide for Van (Zazie Beetz) and his daughter, but it’s a coming out party for Stanfield, who’s been entertaining but also a bit icy. He delivers the episode’s best line, telling Earn to “stay woke” after he criticizes his preferred vehicle for cereal consumption, and the moment where he redeems himself to Earn is genuine and touching, but still firmly within the framework of the character he has established. Where before it seemed difficult to imagine Darius supporting a plot by himself without Alfred or Earn, now he’s a full-fledged lead. Now all we need is some solo time with Van, who’s also shown the potential to carry a plot line largely by herself.

“The Streisand Effect” doesn’t have the same replay value as the series’ previous three episodes, in part because after hearing the pair of keystone speeches (Earn to Darius on being poor, and Alfred to Zan on why he raps), it becomes abundantly clear that that’s what Glover was building towards for the entire script. Fortunately, those scenes back a serious punch (especially Alfred’s; Henry’s been an absolute revelation and shown more depth in every episode), and elevate the episode from great filler to emotionally fulfilling television.

Ultimately, this episode is a rich character study that further familiarizes us with Atlanta‘s three stars, so that when the stakes begin to rise we’ll be fully locked in and invested. The show’s doing the unglamorous narrative and character work here, but it’s clear that the journey we’re on with Earn, Alfred, and Darius wouldn’t work without these quieter moments. “The Streisand Effect” should be a hit with Paper Boi fans and #zansexuals alike.