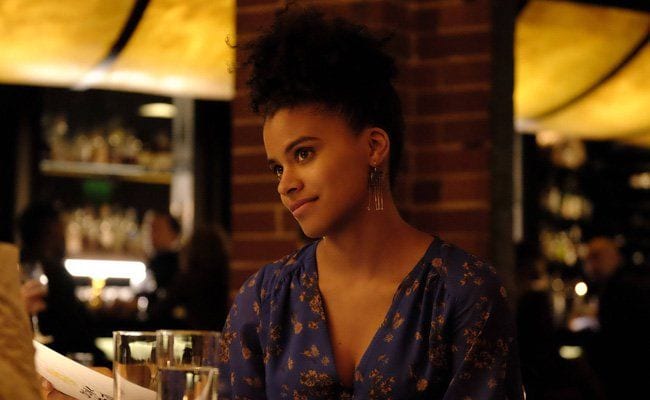 Both “Nobody Beats the Biebs” and “Value” take Atlanta‘s action outside the show’s standard stomping grounds, transporting the characters to environments beyond their usual section of the city, where a mix of danger and drab monotony hang heavily in the Georgia air. In the former, that setting is a charity basketball game, where Alfred (Brian Tyree Henry) is playing alongside the likes of Justin Bieber (Austin Crute, more on that later), while Earn (Donald Glover) is making the most of a misidentification and networking with the agents of the other players.

“Biebs” smartly subverts its bottle episode trappings by establishing two distinct settings: the court where Alfred dukes it out with Bieber, and the posh VIP area where Earn finds himself after Janice (a terrifically biting Jane Adams) mistakes him for “Alonzo”, a former coworker. The two settings differ starkly, a point driven home by the general blasé attitude that the agents have towards the event that brought them all together. While it’s telegraphed pretty early that Earn’s relationship with Janice is going to sour, Glover’s always been able to play backed-into-a-corner with pitch-perfect timing and relatable discomfort.

The big disappointment of “Nobody Beats the Biebs” is the relegation of Darius (Keith Stanfield) back to a quirky distraction after he thrived the previous week, leading Earn on a hustler’s odyssey that began with hocking a cell phone and ended with puppy breeding. Stanfield proved himself capable of pushing a plot forward, so seeing him here in only a few scenes is frustrating, even if the gun range scene (which may be the most Linklater of the show’s handful of very Linklater moments) does provide a fascinatingly bizarre bit of background information on the character himself.

But back to Bieber; having Crute play the role was an intriguing choice, both in that when casting someone that iconic finding the right actor would surely be an arduous, thankless task, but also because it presents another context through which we can examine the media’s treatment of Bieber’s antics. Sure, Crute is playing a version of the “Sorry” singer so off-the-walls he can’t even keep his composure for a charity event, but it also forces the audience to consider the differences in portrayals of young white figures versus their black counterparts. Luckily, as with everything Atlanta, Glover and company keep the message subdued and sandwiched between some surreal laugh lines. The song he performs as an apology sounds like the most fun Glover has had on the mic since the Freaks and Geeks halcyon days of his rap career.

With “Value”, we finally get a long-awaited Van-centric episode, and Zazie Beetz carries the weight of the arc effortlessly. Her shifting demeanor in the early scenes with Jayde (Aubin Wise) feels undeniably relatable for anyone who’s ever tried to keep a mildly acidic relationship from your past alive for no clear reason. Jayde, a globetrotting NBA paramour, looks down on Van’s lifestyle, and the two clash in a posh restaurant before eventually making good over an ill-fated joint.

Much like Earn’s tangle with Janice, the fact that Van won’t be able to pass her drug test is evident from the moment the conflict is introduced, but it still manages to be a thrilling watch (or as thrilling as watching someone try to extract urine from a diaper like they’re Pusha T cooking up in the kitchen can be), thanks in large part to the never-before-explored dynamic between Van and Alfred. Obviously the two characters know each other, but in the span of a single phone call we get a rich glimpse into their opinions, and the different ways they click and clash. It’s also hilarious, and viewers should hope that Atlanta finds an opportunity to pair the two up face-to-face as the season goes along.

Van’s clearly frustrated by her surroundings, but before this episode, we primarily saw those projected onto Earn and his own failures as a parent. She seemed like a character with a fascinating personal life that was worth exploring beyond just her connection to Earn and their daughter, and “Value” leaves her character in a quandary that certainly warrants revisiting. Earn does make an appearance here, but it’s clearly through the eyes of Van, which is impressive given that we’ve spent so much more time with his character, and another show would take the easy route and make him the center of attention for those few minutes of screen time.

While these two episodes differ in terms of execution, both hammer home the fact that Atlanta is so much more than a music industry show, or even a show about rappers. It’s a testament to the mix of ennui and outright desperation felt by smart, capable people as they see themselves underachieve, and the (occasionally drastic) measures they take to try and shake themselves free. Whether that’s Earn pretending to be Alonzo to make some connections, or Van trying to use a condom full of urine to pass a drug test, no show on television is capturing this ephemeral mix of emotions in more addictive, off-kilter ways.