“Here comes a bikini whale!” Fred shouts. A girl screams. The dry electric guitar strums come crashing in as a large curling wave would smack into a beach. These are the final 30 seconds of “Rock Lobster”, and it is one of the finest rock songs ever recorded.

Four decades ago, the eponymous debut album of the B-52’s was released, and few truly knew what to make of it. It was weird, quirky, and emblematic of all that was great and wild about the burgeoning sound of new wave. Commenting on our consumerist past while carving out a truly carefree future, their legacy paved with instantly memorable hooks that show how some earworms are meant to live forever.

The Athens, Georgia-based group — whose first lineup consisted of Kate Pierson (vocals and keys), Fred Schneider (vocals), Cindy Wilson (vocals and percussion), her older brother Ricky Wilson (guitar), and Keith Strickland (drums and keys, later taking over guitar duties) — netted an early hit with the memorable odd ditty “Rock Lobster”. That in turn lead to them signing to Island Records and having label founder Chris Blackwell produce the whole thing with a grittiness that only made their colorful melodies pop all the more. Many saw the group as odd, perhaps even with the makings of a novelty act (or worse, a one-hit-wonder). But as the decades of passed, their legacy has only grown. They are now rightly acknowledged as true rock innovators.

As a way to mark their 40 years in the business, the band have regrouped and thrown everything they can into celebrating the weirdness, the wackiness, and wonderful energy that emits from the B-52’s. The group is currently on a world tour. Meanwhile, a book covering their entire history is in the works for a 2020 release. Also, Fred Armisen will serve as Executive Producer of director Craig Johnson’s (of Skeleton Twins fame) full-length documentary about the group.

“There are millions of stories, and it’s hard to go through them,” admits Cindy Wilson when talking to PopMatters. “We did an interview for [the documentary], my husband and I. And to try to fit 40 years into a couple of interviews — [it’s] very hard. My husband made a scrapbook. We’ve been together since the very beginning of the B-52’s, and he was there for the whole thing. So we had a lot of stories that we could remember together, and that certainly helped. Also, it’s interesting because different members have different viewpoints (as is natural), but it’s really interesting how it’s going to come together. I’m looking forward to it.”

While the print music publications of the late 1990s may not have held the B-52’s in the highest of critical regards, a new generation of online journalists have been quietly changing the narrative, realizing that the B-52’s were responsible for redefining how weird and wacky a rock band could be while still operating in the realm of the commercial. That 1979 debut album especially holds a distinct charm, balancing silly with sexy with alarming ease. Even as the lyrics were about cheeses and forgotten dances, those retro keyboards, sly drum fills, and dirty guitar lines grounded the album with a gravitas that kept the songs from being easily dismissed. PopMatters has written about this record extensively and ultimately determined that album track “Dance This Mess Around“, written by the whole band, remains their slithering artistic apex.

“We have a good time doing that,” says Wilson after being told that “Dance This Mess Around” could be considered sexy to some. “For me, I just feel it like it makes so much sense now, with Trump and all this horrible stuff that’s going on. The disintegration of what I thought was the positives of the United States. And it’s just like: sometimes it just gets so overwhelming you just need to kind of dance it out to something tribal like that. It felt like that when we were on tour, singing that song. Get up there and try to change things, and get up there and dance! Before you go crazy. [laughs]

Sexy? It does begin with a kind of a tribute to old Motown or ’60s Dusty Springfield kind of thing, and then you just let loose, and you’re flying by the end of the song. It’s a cool song to do. I love that! I love that about songs: it’s just like an adventure that starts at one end and ends someplace else. It just conjures up this amazing magic; every song has this magic to it.” 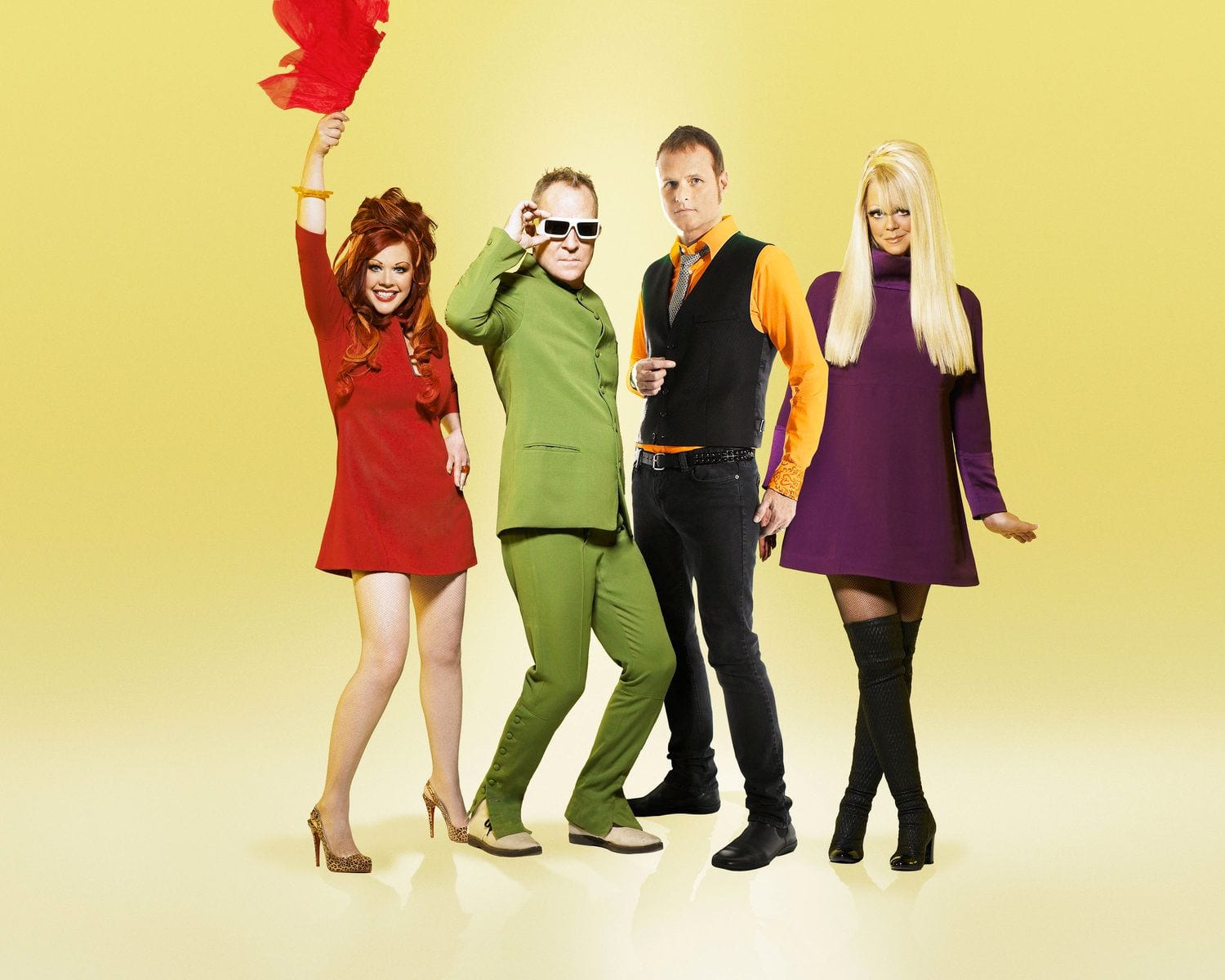 Of course, the band’s output wasn’t defined by a single album, as great as the eponymous record was. 1980’s Wild Planet was a striking sequel that didn’t break new thematic ground but gave us singles like the outrageous “Private Idaho” and the surprising psychodrama of “Give Me Back My Man” (along with great album cuts like “Dirty Back Road” and “Strobe Light”). With 1983’s Whammy!, the group transitioned to a more electronic sound, largely driven by the interplay between Ricky Wilson’s guitar stylings and the band’s newfound fascination with electric drums.

“The electric drums were kind of a new sound from back then,” recalls Wilson, “and we were taking a chance by using those, and I think there was a lot of that on Whammy!. But we had fun with them. Now going to listen back to that record, it’s really fun!”

As vivid as her memories are, Wilson admits she doesn’t spend a whole lot of time listening to the albums the group made. “Every once in a while I’ll go back and listen to the original [records],” she says. “I have a problem with the new recording and the mixes, but I like the original recordings, and it makes me cry, it makes me happy to listen to those.”

The release of 1986’s Bouncing off the Satellites, however, was difficult for the group, as Ricky Wilson was increasingly withdrawn and eventually passed away at age 32 due to complications from AIDS. While his songwriting was still featured on the album, it marked a change for the band. To this day, Wilson cites the album as underrated.

“Warner Bros., after Ricky passed, they just shut it down and didn’t do their part of the promoting and all that,” Wilson remembers. “Also, we were just kind of in shock, and in depression, so we didn’t really go out and support it. I mean, we didn’t have Ricky. I think we went out to England and did a TV show and did ‘Wig’, which was off of that. I think [Bouncing] has a lot of good performances on it, and it was Ricky’s last record too.”

The story after that is a notably different one, as 1989’s Cosmic Thing featured “Love Shack” — the song that would become their biggest hit and instant signature. A cultural touchstone in many ways (a young RuPaul was featured in the music video, for a start), that and 1992’s Good Stuff put the band back on the map, with occasional compilation releases, tours, and solo projects filling out the years that followed.

Wilson began experimenting around with her solo material in late 2016, putting out two EPs before eventually unleashing the album Change in 2017 on Kill Rock Stars. The material contained within is still very accessible, but there’s a moodiness to both the texture and the songwriting which very much would not have fit into the usual B-52’s sound.

“[The B-52’s] is always going to be a part of my history: it’s easy to slip back into it,” Wilson notes. “The solo record was just an experiment I was doing with some friends. We leisurely did it, and it was wonderful to be able to experiment with different sounds instead of being the same thing (The B-52’s). It stretches you, artistically. Working with other people was really fun, too. These days, it’s hard in music. You can ask any musician about trying to pay for [anything]. Even making a living — a lot of people have to keep a day job. To have the B-52’s as a day-job? I love it.

“I don’t regret doing the solo album,” she continues. “It was starting over, but it really wasn’t meant to ‘start over’ as much as just seeing what would happen. We were lucky on a lot of fronts. We got Kill Rock Stars to help us out, and we did get to go tour, but I think there were a lot of mistakes that we could’ve avoided. But to be at that part of that level of the business for a while was completely different: I didn’t know what to do, but for everything I put into it, I don’t regret it. I mean I enjoyed being with all the people I was with and touring and putting out this album. It felt great. I would do it all over again. It was wonderful, you know? And I got this memory and these bunch of songs — it adds to my whole musical career. Even if it wasn’t a big hit, to me, it was a big hit, and that’s what’s important.”

As we chat, Wilson remains buoyant, happily talking about her time with the band that has made up so much of her life. She was blown away by the size of the crowds that came to see them in Europe, teases out some less-famous tracks to drop into the live mix (like “Juliet of the Spirits” from 2008’s comeback album Funplex), and says she has no regrets in her life. “Except I should’ve taken better care of myself,” she admits. “I’ve burned out a few times during the years, and it made me have a hard time at points — but I have no regrets.”

And as for working in the same band for 40 years, touring the world, now being the subject of a new book and documentary, and even interactive New York Times articles that trace the exact history of every song off of that debut album, Wilson’s proudest accomplishment remains the same: “Making people happy and doing the best I can. That would be the proudest thing. For me, I think that’s a big deal.”

And yes: she could probably still outswim a bikini whale.