A loosely futuristic and blood-soaked fable with sharply cutting intent, Bacurau starts off ominously “a few years from now”. A young woman, Teresa (Barbara Colen), is hitching a ride in a tanker truck that’s ferrying water to her home village in a remote corner of the Brazilian outback. They slow down as they pass the site of an accident: a car collided with a truck carrying coffins.

Now the road is filled with people grabbing coffins. While foreshadowing the violence and selfishness that lies ahead, it’s also a gag whose repetition—characters keep showing up throughout the movie with coffins stuffed into their vehicles—has the blatant cynicism of a spaghetti western.

The village Teresa returns to after a mostly unexplained absence is a quiet, homey place where nothing much seems to happen and its inhabitants are just fine with that. There for her grandmother’s funeral, a crowded affair with music and dancing and an unhinged eruption of half-drunk rage from the village doctor Domingas (Sonia Braga, somehow subtle in a larger-than-life role), Teresa doesn’t seem eager to leave. In part that could be due to hooking back up with an old flame, the Internet-legendary quasi-retired gangster Pacote (Thomas Aquino). Also, she may just enjoy threading herself back into the village, whose almost magically serene self-sufficiency carries a whiff of the matriarchal fantasies of Ursula Le Guin. 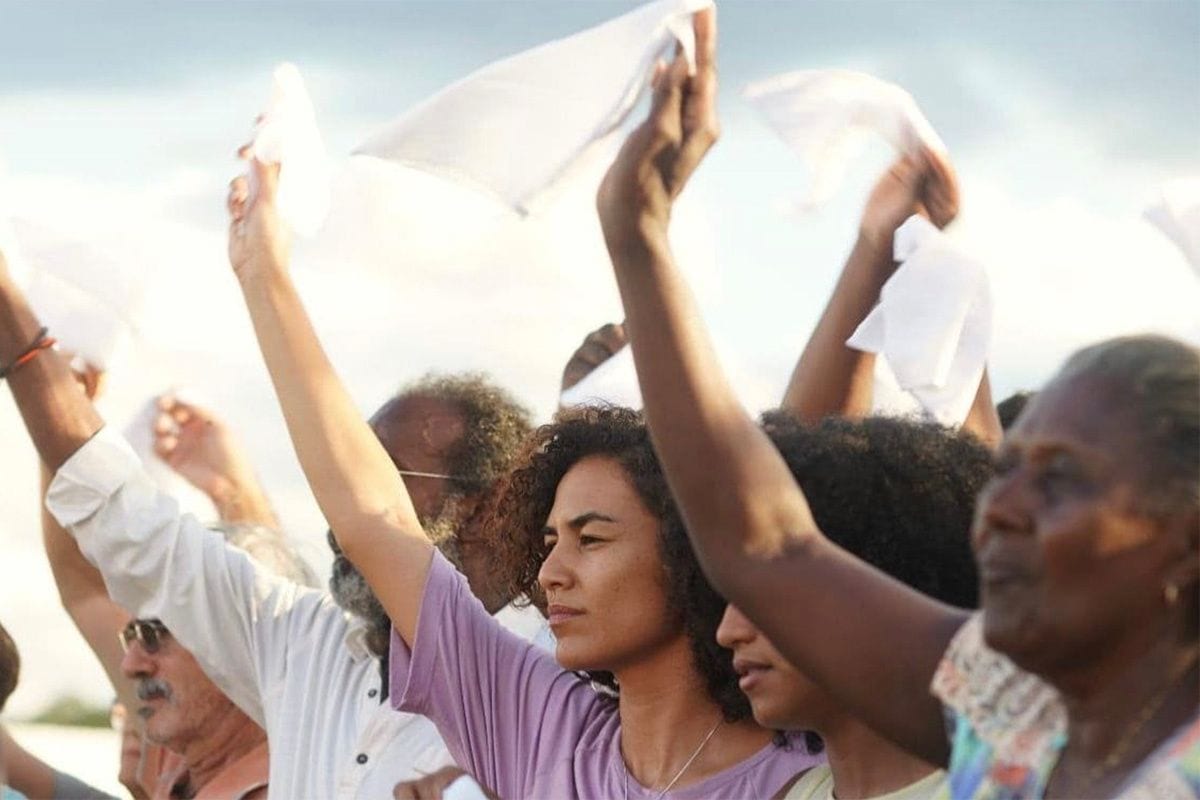 While vaguely appreciated for its ability to supply cell phones and electricity, the Brazil outside the village and its immediate environs is viewed with little interest. Those who have been there have returned and not been impressed, with the suggestion that Brazil’s current creeping lawlessness has only further devolved in the future. But there is also the sense that Teresa feels she needs to stick around and help defend this place. Because it is under siege.

An undefined band (criminals? soldiers? both?) has taken a nearby dam, resulting in the need to truck water in. But one day the truck shows up with bullet holes in it. People begin to go missing. Most of the roads have been cut off due to some ill-defined “incident”. A village elder is followed by a buzzing aircraft that looks like a miniature version of a UFO out of Fred F. Sears’ 1956 film, Earth vs. the Flying Saucers.

An entire family at a nearby ranch is found butchered. Then the filmmakers put an old John Carpenter theme on the soundtrack and things take a sharp and unexpected turn toward genre once Udo Kier (as Michael) shows up with some violently racist mercenaries looking to play a few rounds of The Most Dangerous Game; that is, hunting humans. 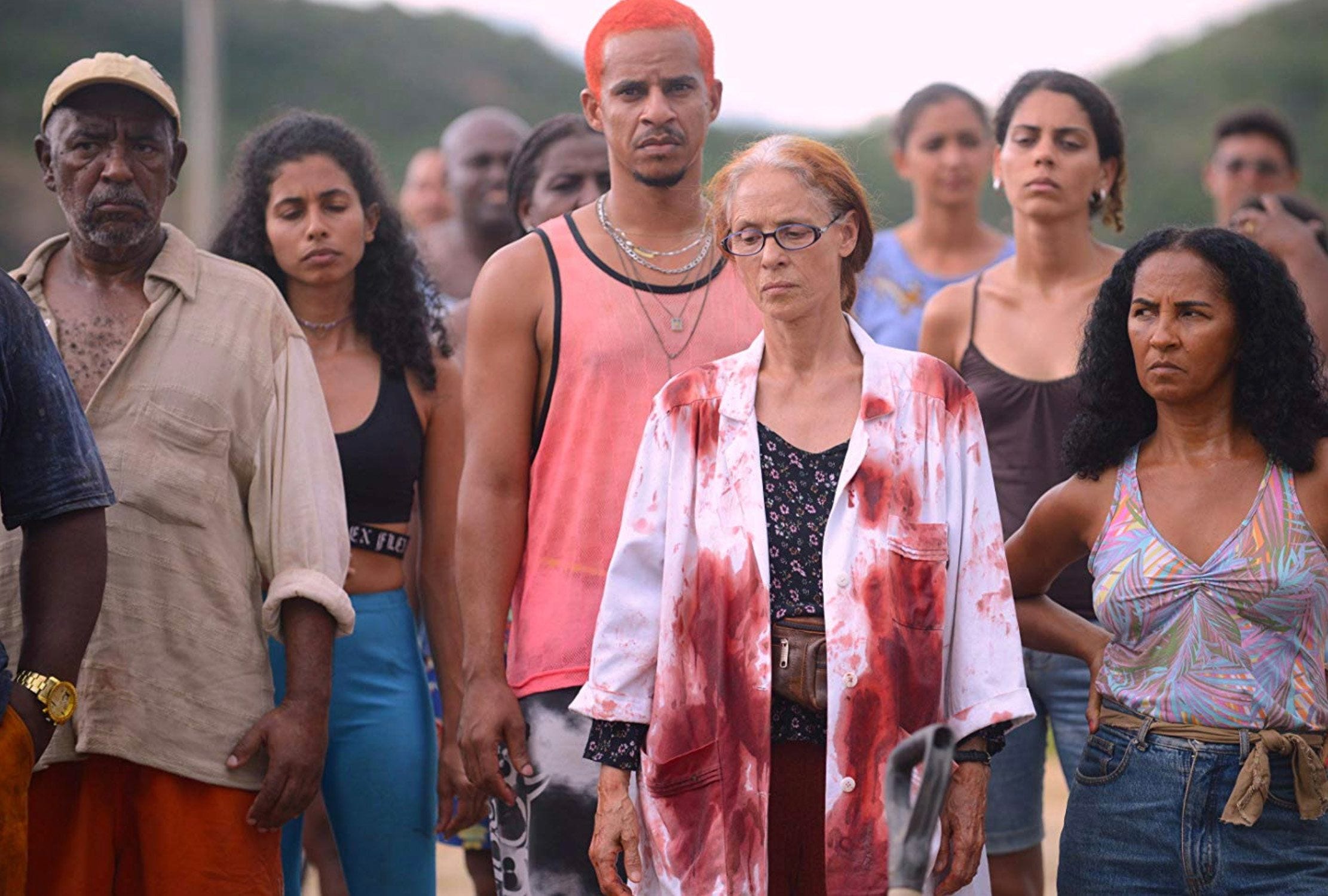 Written and directed by Kleber Mendonca Filho and his frequent production designer Juliano Dornelles, Bacurau (which had its US premiere on 1 October at the New York Film Festival) is a story of invasion that doesn’t give its invaders the credit of taking them seriously. It accomplishes this by creating a redolent sense of home in its setting that somehow feels loving and lived-in without cheapening it with sentimentality. This is a talent that Filho has shown to great effect in movies like 2016’s Aquarius and 2012’s Neighboring Sounds, which were so beautifully rooted in geographic specificity that their vividly rendered urban locales almost overwhelmed the somewhat laidback performances.

This time, the filmmakers are working from a different template. Rather than closely observed urban drama, they are trying something far more audacious. By bolting together a serene kind of magical realist portrait of harmonious village life with a quasi-comical but occasionally quite savage band of vintage pulp villains, they run the risk of neither part quite fitting together. At times the tone is hard to read as it alternates from tragedy (the senseless murder of a child) to absurdist (Kier’s Elmer Fudd speaking voice). Stitching it all together is a recurring theme of stoic but far from subtle anti-colonialist commentary that turns white-hot with the calculated vengeance of the last act.

Not much that the villains do in Bacurau makes sense. At times this can undercut the impact of what is often quite a striking and off-kilter work. Facing the blasé, almost nonchalant villagers, the killers look less sinister than comical. They barely even seem to exist or to matter. But maybe that’s the point.