Drew Goddard’s Bad Times at the El Royale is an ambitious undertaking for this director’s second feature. The film runs for a sprawling 140-minutes, complete with a crisscrossing episodic structure and a rich ensemble cast of noir characters colliding into each other in the bloodiest of ways. And yet, as clever and engaging as Bad Times at the El Royale can be, it never quite takes flight. Goddard’s previous (and first) film The Cabin in the Woods (2012) is a genre-bending take on the horror film, and his other screenplays like Cloverfield (Matt Reeves, 2008) and The Martian (Ridley Scott, 2015) elevate familiar tropes in unexpected ways. Bad Times at the El Royale faints in these directions, but gradually becomes a more conventional crime film with a bloated structure.

The story takes place in the late ’60s on the Nevada/California border. Literally. The El Royale is built equally across both sides of the border, giving guests the options of staying in the state of their choosing. The El Royale used to be hip, catering to America’s most powerful and influential figures. Now it’s like a ghost town where, over the course of one wild and violent day, several travelers check in, bringing more baggage than just the luggage they carry.

Goddard constructs the film like a Quentin Tarantino movie, complete with title cards for the different characters’ segments, including those of a forgetful priest, Father Flynn (Jeff Bridges), a distrusting soul singer, Darlene (Cynthia Erivo), a boisterous vacuum salesman, Laramie (Jon Hamm), and one pissed-off hippie, Emily (Dakota Johnson). We see flashbacks to events that led them to the El Royale, and how they cross paths with one another as they discover its secrets. Those secrets revealed soon build to danger, and each character will need to reckon with the hazards that hover over them like the thunderstorm raining down upon the hotel.

In the first half of Bad Times at the El Royale, these scenes showcase Goddard’s astute craft as both a director and screenwriter. He creates wonderful mystery out of the guests discovering the El Royale’s seedier side that has long been masked by the glamorous décor and trendy reputation. Even with the intriguing overall mystery, the actors’ verbally playing off one other might be the most memorable takeaway. Indeed, Goddard sets up the guests (and one distraught concierge named Miles) in the manner of an Agatha Christie novel. 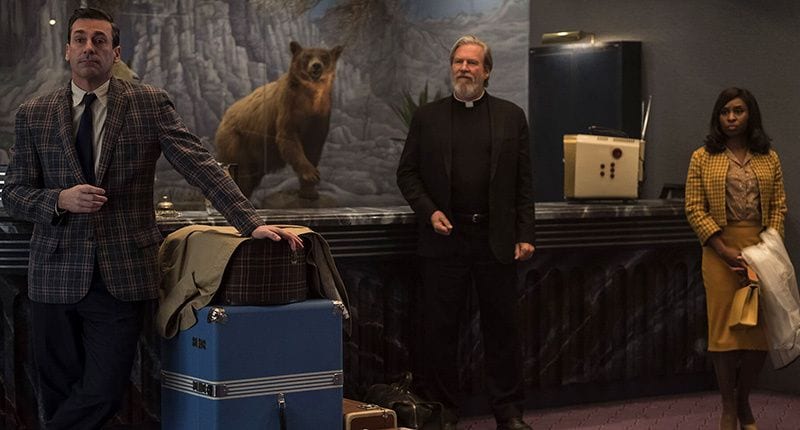 Among the best of these performances is Bridges as Father Flynn, who’s more than what he seems (he’s also known as Dock O’Kelly). He gradually wins the affection of Darlene, a noirish heroine on the run from the toxic world of the Los Angeles music scene. Initially guarded, Darlene opens up to Father Flynn and he to her. It’s a pleasure to watch the priest and the singer talking in the lounge about their lives. Bridges has been playing older figures of authority for so long that it’s easy to forget how disarming he can be with that smile and charm reminiscent of his more boyish smooth talker work from the ’70s like, Lightfoot in Thunderbolt and Lightfoot (Michael Cimino, 1974) or Duane in The Last Picture Show (Peter Bogdanovich, 1971). Erivo, making her big screen debut, gets to showcase both a commanding presence and vocal ability that becomes more than just an excuse to let her sing — it’s essential towards advancing the plot.

Many of the other characters take a back seat to Bridges and Erivo, including Hamm, Johnson, and Chris Hemsworth as a mysterious Manson-like cult leader named Billy Lee who sashays into the third act as the film’s de facto villain. By the time Billy Lee arrives, the film has deflated from its early gusto, thanks to some structural choices that don’t quite pay off. A large part of those problems develop from the structure. Goddard is a television veteran of several Joss Whedon and J.J. Abrams shows, along with Daredevil, which he created for Netflix. The different chapters do a hell of a job of building anticipation and tension, but that excitement quickly vanishes from one section to the next, almost like episodes in a series that need you to feed off the cliffhanger to get people to tune in next week. Each new chapter doesn’t immediately capitalize on the tension from what we just saw. These fits and starts began to play when you keeping hitting stoplights driving down a stretch of road with a high-speed limit, if you will.

Thinking again of Tarantino, he has a real gift for finessing each section of his stories into its own satisfying short story, something that Goddard doesn’t do. As Bad Times at the El Royale progresses, the story becomes clunkier. Some of the details are easy to brush over early on, but as the movie trots past the two-hour mark, you can’t help but think a storyteller could compact elements of the plot in a way not so beholden to the structure into something more satisfying. Do we need so many flashbacks? Can you convey entire scenes with an image or dialogue? Do we need to see one character’s death three times from multiple perspectives? Despite elements that cause the film to languish, Bad Times at the El Royale features enough engaging material that will please viewers, but it’s easy to see that a leaner, more traditional noir with this same material would really hit like a bullet to the gut.