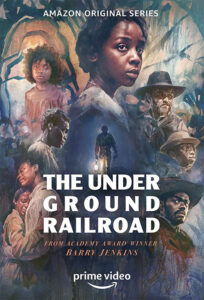 Challenging the present streaming series style with its unapologetically lengthy tangents, stylistic filigree, and avoidance of most typical episode-ending hooks, Barry Jenkins’ The Underground Railroad is better thought of as a ten-part film. It does not lend itself to the kind of breathless episode-recap coverage one gets with similarly-minded shows like Bruce Miller’s The Handmaid’s Tale.

Jenkins is generally more experiential than plot-driven, and so The Underground Railroad ripples with the silently evocative and luxuriantly filmed moments that gave Jenkins’ Moonlight (2016) and If Beale Street Could Talk (2018) much of their power. Even though The Underground Railroad also has its share of sinking-gut horror and hairbreadth escapes, Jenkins ultimately delivers a subtler and yet grander impact by telling the story as a unified whole rather than a string of attention-grabbing peaks and valleys to jolt viewers out of pandemic streaming torpor.

Based on Colson Whitehead’s 2016 novel, the series is set in a 19th century America that technically never happened. Yet, it’s dense with linkages to actual history and current events. A story of slavery, the series begins on a plantation deep in the swampy Georgia backwoods. The broad outline feels familiar at first, though not without impact.

After the plantation owner murders one of the enslaved men by burning him alive as entertainment for his dinner guests, enslaved Cora (Thuso Mbedu) is convinced to escape by Caesar (Aaron Pierce), both having decided that even a potential fate like they just witnessed is better than the alternative. This is a glorious moment when the two have broken free of their pursuers and are sprinting across a field toward their Underground Railroad contact. It is at that point where many other stories might end. But Whitehead’s is just beginning.

In his refashioning, the network of abolitionist safe houses is rendered as an actual network of underground trains that carry the formerly enslaved to safety. Take a look out the window the conductor tells Cora, “You’ll see the true face of America.”

Most of the following episodes track a different stage of Cora’s journey. Because unlike a significant number of slavery narratives, The Underground Railroad does not end once its characters cross the Mason-Dixon line. This America appears to be one where the Civil War has not been fought. The North (only briefly glimpsed in the later episodes) appears to be largely uninterested in the abolitionist cause or keeping the nation united. Like the best alternate histories, Whitehead tacks closely to the historical record, particularly its rendering of the latitude that “free” states gave bounty hunters to kidnap escapees wherever they were and return them to their gulags of cotton. As a result, no matter how far Cora rides the railroad, she has Ridgeway (Joel Edgerton)—a Manifest Destiny-spouting drunk with a predatory zeal that goes beyond the financial rewards of slave catching—following not far behind.

The America that Cora sees in a journey stitched together by Nicholas Britell’s looming soundscapes seems at first a checkerboard one, with no simple demarcation between slave and free states. South Carolina is a relative haven where Blacks are given some freedom and access to work and education. While it has no slaves, North Carolina is a genocidal charnel house where the first Blacks she sees are hanging from trees, the state has outlawed their very existence. Tennessee appears suspended somewhat between slave and free, with Blacks given some degree of autonomy.

No matter where Cora escapes or is dragged in chains to, the very word “free” remains complicated. At a self-sufficient free Black community in Indiana where Cora meets Royal (Willian Jackson Harper), a dashing romantic who takes dangerous missions into the South to deliver people to the railroad, the White neighbors are similarly comfortable only with Blacks having clear limits on their self-determination. Indeed, the White South Carolinians paying such attention to Cora’s reading and elocution are interested in equality only up to a point.

In one of the show’s eeriest inversions, Cora performs in a living diorama in a South Carolina museum—even as a free woman, she still picks cotton under a White gaze. Arguably the show’s most fascinating character is an apparent contradiction: Despite Ridgeway’s eagerness for pursuing and punishing Blacks that offend his ideas of racial superiority, his faithful sidekick and the only person he treats with any measure of respect is the young Black boy Homer (played with a watchful intensity by Chase W. Dillon), whose knotted loyalties make him potentially the most fascinating character you will see on a screen this year.

Those complications punctuate a narrative already chopped up with flashbacks and digressions of uneven success. At least one of these (“The Great Spirit”) might have been excised without any collateral damage: Ridgeway’s racial dementia is perverse but for the time so commonplace as to not require an hour-long origin story. But another, particularly gorgeous and short episode is more like a trunk line off the main railroad, there just to show what happens when a young Black girl gets to a station and finds herself in a beautifully appointed car that can potentially take her to a better future.

Whitehead did not use the fantastical railroad and its high-class stations—all bright white tile and gas lamps—to provide a simple comic-book resolution in which enslaved Blacks are delivered safely to the North. His retro-Afrofuturism is more about signaling possibilities of what a people can accomplish. “This is heaven,” Cora says while waiting in a bustling terminal with a station agent. Ask Africans to build a station underground, the agent says, of course, they’ll provide it with great coffee.

That somewhat throwaway moment captures much of what is great about The Underground Railroad. While the story does get bogged down by Jenkins’ circuitousness, that willingness to stop and look around is what gives this series much of its heft. That is why Jenkins spends so much time on details that don’t necessarily advance the plot: Royal’s longing courtship, the small bag of okra seeds left to Cora by her mother Mabel (Sheila Atim), how Ridgeway fights to bring Homer into Whites-only spaces, the taste of coffee far underground in the middle of a long and perilous journey. What is freedom without the things that make life livable?