Let the world howl till it’s blue in the face. Stefan Sagmeister and Jessica Walsh have created quite a beaute with Beauty. In an era when humanity’s old truths have been challenged by irony and kitsch, when cynicism has nearly rendered beauty obsolete, it’s reassuring to find shameless devotees to classic ideals.

Sagmeister and Walsh remind us that beauty still can and should please the senses. However, it’s equally capable of engaging the intellect. Even more practical, American philosopher Denis Dutton, perceives utility in beauty; in his paradigm, beauty serves an evolutionary function, as a measure of excellence, it provides an archetype for any “well-executed human achievement”. But mostly, while sweeping through five centuries of visual arts culture, Beauty argues that its titular theme needs no apologetics.

Adorned in glorious trappings, every parcel of the book proclaims its muse: the slip-case cover is emblazoned with a capital B (formed by a snake entwined with budding vines); the book cover foldouts are decorated with Timothy Leary-status mandalas (don’t worry, it’s legal in all 50 states—except, maybe, Texas); the book’s fore-edge is scripted with its thesis (Beauty = function, a message only visible when held askew); and there’s the joy of seeing design school no-no’s broken for sheer indulgence—the curvaceous serif font is enough to send an uptight professor shuddering to the chalkboard.

So, what felled the six-digit vixen? Was it hygiene issues? Did we forget to bathe? Although Modernism played a role, the tradition-resistant movement does have an alibi. The pursuit of beauty dwindled after horrific wars in the 20th century left humanity questioning its nature and, by extension, its standards for progress: “The essence of the problem lies in the radical misconception that beauty is old-fashioned, somehow embarrassing, and simply not a respectable goal for today’s creatives.”

Perhaps no other ideal has been so adored and yet so misunderstood. Despite changes in world views, beauty still matters. It doesn’t take dialectical reasoning to justify its value. Armed with common sense empiricism, Sagmeister and Walsh notice that people who feel differently in the presence of beauty often behave differently, too.

Experts in fields from the sciences to the arts have long pondered the role of beauty within human consciousness. Mathematician Benoit Mandelbrot saw beauty in forms which others dismissed as chaotic: nature displays fractal patterns, for instance, in cloudscapes and coastlines. Studies later provide that viewing patterns can reduce stress. If pleasing patterns can quell anxiety, then the purview of aesthetics quickly becomes more profound than magazine photo shoots. Never mind a Doctor’s note. Save the co-payment and spend a day staring at the clouds.

To their credit, Sagmeister and Walsh don’t rely upon the experts; they test the findings of their predecessors. Polling audiences by Instagram, their surveys demonstrate that innate standards exist within the perception of beauty. Some surveys confirm the classics; when people were shown rectangles with varying proportions, the rectangle designed according to the golden ratio was perceived most favorably. Leonardo da Vinci would be proud. Other surveys boggle with the mind’s marvels; when people were shown two versions of a painting by the Modern painter Piet Mondrian, an authentic reproduction alongside a fake, most people instinctively preferred the original. Once again, beauty transcends pore count.

Ever since our ancient ancestors first wobbled on two legs, humanity has courted beauty with steadfast devotion—some might say, like a suitor skirting a restraining order. The pursuit is ageless. A million years ago, early man created stone axes with careful craftsmanship; in the scope of evolution, the preference for symmetry serves no functional purpose. Of course, some cultures, like that of the nineteenth century Romantics, obsessed with beauty a bit too single-mindedly, churning out garish paintings of windmills and waterfalls. Clearly, there are limits.

But without an appreciation for beauty’s innate value, public projects tend to fail: “So many of the projects created throughout the functionalists’ golden period in the second half of the twentieth century—like public housing projects and airline emergency cards—were not successful. Nobody wanted to live in the former or to read the latter.” When designers disregard beauty, end-users suffer. Worse than projects of failed functionalism are projects which neglect the very humanity of its users. The Bauhaus architect Fritz Ertl maximized this horror when he designed the barracks for the Auschwitz concentration camp.

Even within the field of fine arts, where it’s accustomed to being adored, beauty has witnessed a steady decline. Contemporary art delights in shocking audiences more readily than in pleasing them; kitsch, especially, complicates aesthetic appreciation: “When we use kitsch, we can distance ourselves from beauty; we are allowed to keep our cynicism intact. No need to be sincere.” In 1917, the Modernist artist Marcel Duchamp submitted an upturned urinal, which he exhibited as a porcelain sculpture, to a salon. One hundred years later, his art piece continues to haunt house-broken audiences worldwide. Irony serves a purpose. But Beauty makes a strong case for balancing the criteria of art and design between aesthetic appeal and practical functionalism.

Of course, examples of beauty appear clearer when weighed beside less attractive neighbors. In the field of social media, Sagmeister and Walsh critique the culture of trash-talking Twitter in contrast to the beautified landscapes of Instagram. In the field of commerce, Sagmeister and Walsh compare detergent packages for consumer response; while Tide trumps Gain on this side of the Atlantic, American marketing trails that of the Japanese who design everything to be fondled by the eyes. And don’t forget Virgin America’s beloved emergency exit music video; 12 million views later, the instructional video still entertains YouTube audiences with its refreshing whimsy. 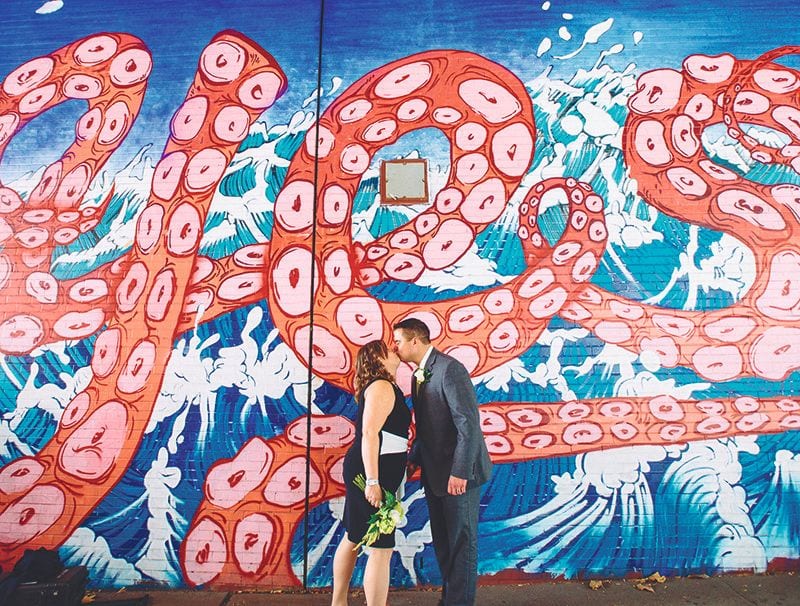 When not helping shoppers in the supermarket or frequent flyers reconsider their safety, beauty also helps people grieve. Even our suffering can be alleviated if given beautiful means of expression. Talk about a cure-all! Life, for us mortals, is impossible without love; suffering, unfortunately, is an unavoidable part of life. Designed to reduce the isolation of suffering privately, memorial sites express the collective grieving which occurs after ordeals such as terrorist attacks, traffic accidents, and the deaths of famous people.

Some people go to great lengths to promote ideals they believe in. In 2007, checking the sprawl of commerce in São Paulo, mayor Gilberto Kassab nearly banned outdoor advertising altogether. But we don’t need a political platform to enact change. Everyday people can influence changes in their communities without running for office. Studies show that by renovating public spaces—painting grimy bridge underpasses or cleaning up abandoned parking lots—people can help to reduce litter, loitering, and crime.

From the supermarket to the stratosphere, beauty isn’t bound by the laws of business or of gravity. Sagmeister and Walsh prove tangibly, convincingly, that beauty lies deeper than blemish-free skin. Beauty‘s testimonies are uncontested; its devotees zealous; beauty always has and always will guide human behavior. I don’t know about you, but it’s rather comforting to consider that the world can be improved with a single paint brush. One brush- (or key-) stroke at a time.