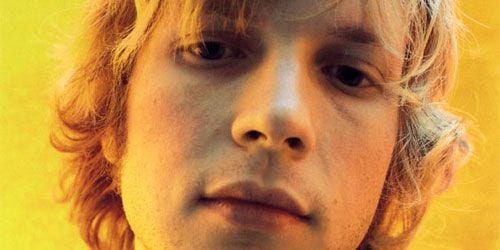 Beck’s 1996 breakthrough album, Odelay, upgraded the stock of the Los Angeles singer-songwriter from one-hit wonder to post-modern absurdist. Before Odelay, Beck’s career — the recorded output of which consisted of his major-label debut, Mellow Gold (1994), two independent releases, and a handful of self-released lo-fi demos — was largely defined by the Top-Ten hit “Loser”, a semi-funky hybrid of hip-hop, blues, and self-deprecation that sounded for all the world like an ephemeral novelty. Much like Radiohead and its transition from Pablo Honey to The Bends, Odelay seized upon a seemingly disposable methodology and conceptualized it — in Beck’s case, his music evolved into a thing of possibility rather than continuing to regress into a series of dumb party jokes.

Odelay arrived right before affordable home recording equipment and the Internet turned the DIY ethic into a viable means of entering the mass market. Its junk-quilt patchwork of reconstituted parts rejected the homogeny of big-league audio production and suggested that something could come from nothing, that pieces of pop, hip-hop, and dissonance could be gummed-up, MacGyver style, into a saleable product that speaks to a fragmented, sound bite-driven culture. As such, Odelay is a manifesto of pop-cultural abstraction, a brash puzzle of miscellanea, of sound effects and out-of-context samples, of dirt road funk and back alley braggadocio. Part of the album’s ingenuity stems from the audaciousness of its jerry-rigged design. Its first single, the rollicking “Where It’s At”, even boasted a DIY mantra (“I got two turntables and a microphone”) that became something of a cultural catchphrase, and also served as a well-needed antidote to the über-serious artists (Oasis, the Cranberries, and Bush, to name a few) who dominated the Modern Rock charts that year.

Odelay didn’t necessarily revise Beck’s aesthetic, but it did reinforce it with developments of lyrical and musical depth. It’s rich with ideas and a refined sense of imagery. “Silver foxes looking for romance / In their chainsmoke Kansas flashdance ass pants”, a couplet from the song “Hotwax”, is one of many instances in which Beck’s beatnik poetics reach lilting critical mass. The record is also overrun with disparate ways in which to musically communicate these ideas. Working for the first time with the Dust Brothers, who was best known for producing the Beastie Boys’ Paul’s Boutique and some tracks by Tone Lōc and Young MC, Beck grafted an incongruous harvest of Wild Style, Skip James, Hank Williams, and noise-punk touchstones into an instinctual whole. As a listening experience, the record is both squeaky clean and unnervingly dissonant. Pop hooks are undermined by infringing noise, hip-hop flows are stuck atop roiling beats, and the overall “party” atmosphere is frequently interrupted by well-plotted seizures of chaos. All of Beck’s subsequent studio records have been conspicuously devoid of this kind of uncompromised discord. Odelay, it seems, marked the ideal midway point between the accessible and challenging halves of the artistic consciousness.

The two-disc Deluxe Edition of Odelay only reiterates this fact, especially when considering the twisting muse that Beck has followed over the course of the five albums he’s released in the last 12 years. This reissue augments the original release with “Deadweight”, the Brazilian-inspired song contributed to the soundtrack for the 1997 film, A Life Less Ordinary, two unreleased tracks from the original sessions, and an extra disc of b-sides previously unreleased in the US, along with a few remixes by the likes of U.N.K.L.E. and Aphex Twin. There’s nothing here that complements or enhances the original album, and it’s safe to say that just about all of the extras (save for “Deadweight”, perhaps) will only be of interest to die-hards. The two unreleased tracks, “Inferno” and “Gold Chains”, are, respectively, rambling and reductive, while the b-sides fail to raise their weirdness above the Mellow Gold fold.

Beck would eventually improve upon Odelay‘s template after genre experiments in the dimensions of sexed-up funk (Midnite Vultures) and Scott Walker-esque orchestral folk (Sea Change): first with Guero (2005) and then, more definitively, with The Information (2006). Both of those albums scale back the confrontational aspects of Odelay and explore more streamlined sounds and textures — new concepts cherry-picked from the blown consciousness of Odelay, a record that wanted to be so much, impatiently, at once.