Between the tables of a café at MuseumsQuartier, Vienna’s hip contemporary art space, unusual faces appear. An older woman and a one-legged man approach people, offering copies of Augustin, the local street paper. They are homeless, and they are also performers in Missing People, Hungarian film director Béla Tarr’s latest project made for the Wiener Festwochen.

Tarr’s work has always been rich with deep humanistic concern, but after ending his film oeuvre, his post-cinematic projects have taken a more actively ethical stance. After his previous installation
Till the End of the World (2017), about the cruel treatment of refugees, he turned his worried poetic gaze to homelessness, to the people whom many are afraid to look at. It’s not the first time Tarr ponders the tragedy of homelessness: his contribution to the 2004 anthology film, Visions of Europe, contains a single shot moving along a long queue of homeless people waiting at a soup kitchen, a sobering answer to the question, What is Europe now?

Sadly the topic not only has a universal relevance but includes a bitter reference to his home country, where the fascistic persecution of homeless people have reached new levels with the criminalisation of living on the streets recently written into the constitution. Unlike in Hungary, where homelessness is an everyday reminder of a society failing, Vienna, regarded as the most livable city by many, hides its poor well, providing the much-needed comfort to the conscience of those living above the line. But Tarr makes them visible again, inviting the homeless of Vienna to one hell of a carnival in the heart of the city. 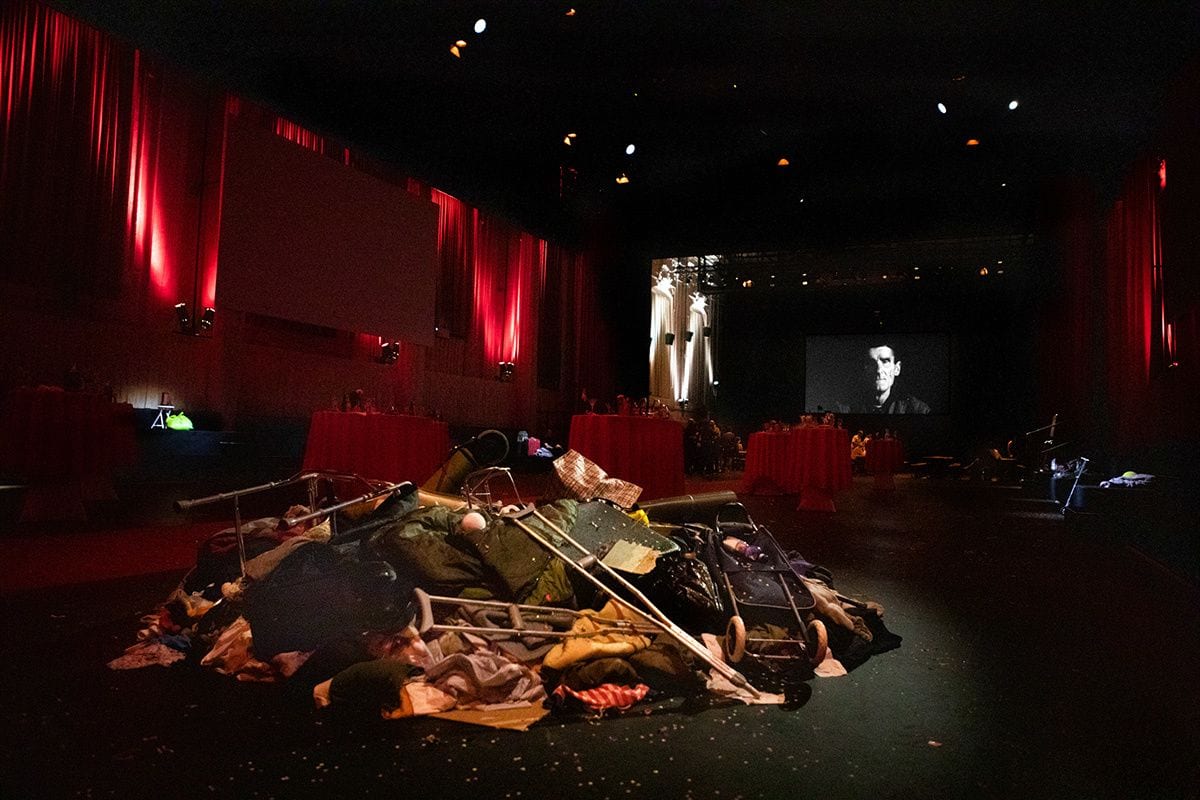 The audience enters the giant hall of the performance only to find they may have arrived late. With rows of seats facing each other on two sides, the central space is occupied by the ruins of a party: red-clothed tables hold nearly finished and empty glasses of champagne and beer, bits of food – what’s left of a feast – are on messy plates, shiny confetti is scattered across the floor. A long strip of red carpet cuts the room in half, leading from the entrance to the wall on the far end which is, like in a theatre, covered with a red curtain. Near the corner, there is a large heap of belongings: blankets, mattresses, carrier bags, a shopping trolley.

The curtain pulls back to reveal a canvas, and we watch a series of non-narrative scenes, 90-minutes of what the director describes as “perhaps a visual poem”. It starts with something utterly out of the Tarr universe: color. With his signature-long shots accompanied by the always hauntingly beautiful Mihály Víg score, the camera slowly pans around the setting in front of us, the broken glasses, cigarette butts, the plates of leftover food. The hall is filled with a melancholy heavily entangled with passing time and dislocated space. Who was here, and what did they celebrate?

On the screen we see the same space as that which is before us, but then we are slowly immersed into something else: as the camera reaches the spot where the screen is, the colors slowly fade into black and white, and we are greeted by the image of a homeless man playing the pan flute. Then, in the film, through the same gate-like entrance we entered, the homeless of Vienna walk in, one by one, slowly filling the screen. It is not the occasional sight of a few homeless people on the streets we’ve become accustomed to as we walk about our city; it is an almost unbearably endless line of people we fail to notice, living in this city without a home. They are here, where we are now, sharing this space where they otherwise would not be allowed. Or at least, they were here.

The following scene explains the setting in the hall: the homeless people have a feast, they surround the tables, eating and drinking with the joy and togetherness of a family dining at Christmas. Why does this have to feel so out of reality? A scene very similar to one in 1987’s Damnation follows: holding each other’s hands they dance around the tables in a circle, a dance of life and death, so sadly unique to being human – they are us, we are them.

Alternating with shots focusing on the whole group, there are scenes focusing on individuals. There’s man dressing up a baby doll so carefully that one thinks he must have – or could have – had a child. There’s a couple talking to one another with gentle affection, their feelings obvious even though we can’t hear what they are saying. An old man is making his “bed”, for which he needs to take out all the things from his bag – everything he owns – to get the mat, then put them back again to be able to use the bag as a pillow.

Many of them perform, showing some kind of talent which, as he explained in an interview, Tarr believes everyone has but many cannot fully develop because of their circumstances; these people are not only physically missing from the public eye, but their potential is not present, either. The tragedy is that they need to develop skills and have to perform only to entertain us in order to make a living. This is most striking when we see one of the men show viewers his daily transformation into a living statue, a very typical Viennese sight — he stands frozen in the spotlight for us to gaze upon. 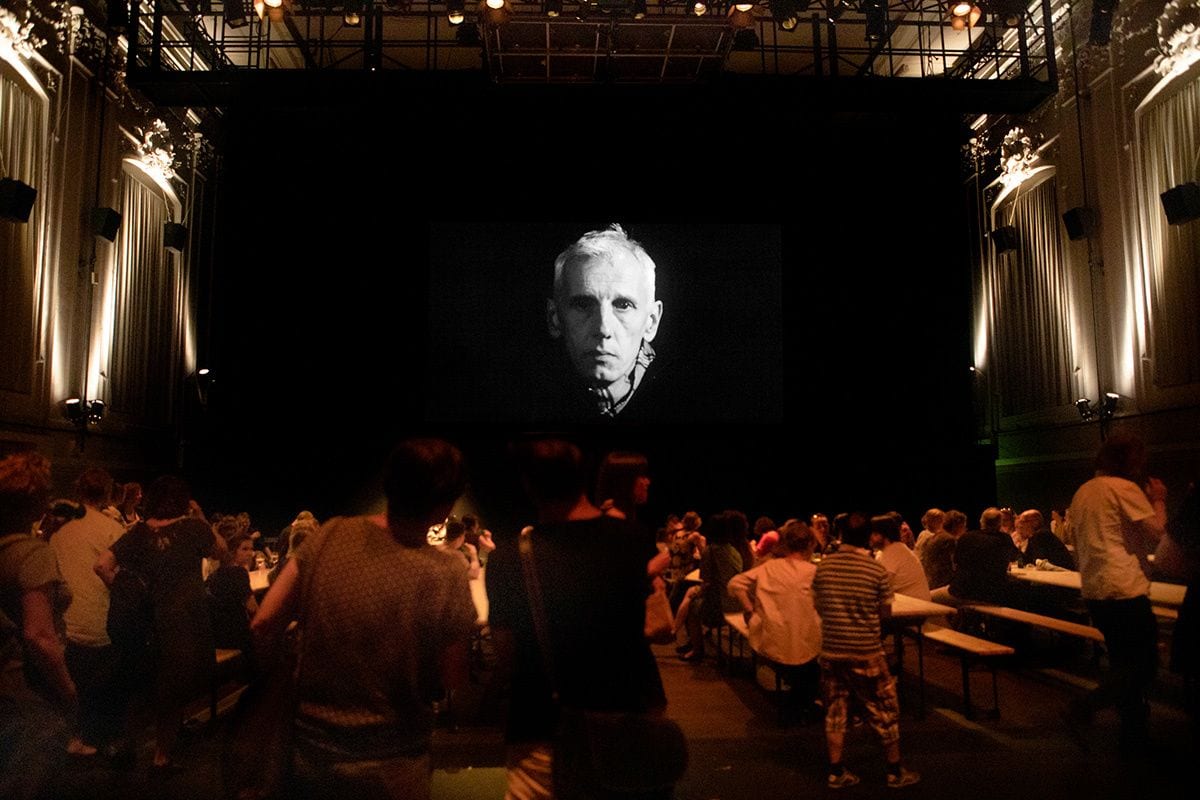 The films ends, the party is over, only the heaped belonging of the guests remain and the question burns: where are they now? We are sitting in darkness except for the spotlights shining on belongings scattered amongst us. They left their things and more importantly, they are missing from the real party. What is there to celebrate when such a feast should be about being together?

We are left with the horrible weight of melancholy and shame. But this is when the real magic begins — and here is what really differentiates the prior filmmaker Tarr from the current multimedia artist. The curtain is pulled back again, but instead of the screen this time, there is a continuation of the hall with beer benches and a bar in the distance. Behind, on the wall, there is another screen projecting individual shots of the participating homeless people. Víg’s music is heard over speakers, an accordionist sits in front, gently accompanying the soundtrack.

It’s a confusing sight, and it takes a moment to realise the invitation, get up from our seats, and approach the set. As we start taking uncertain steps, going together through the giant hall, I realise the utter beauty of being part of this group of people, all of us having just gone through the same demanding and saddening artistic experience. It feels like being in a Tarr film, as if the camera is slowly following us too. 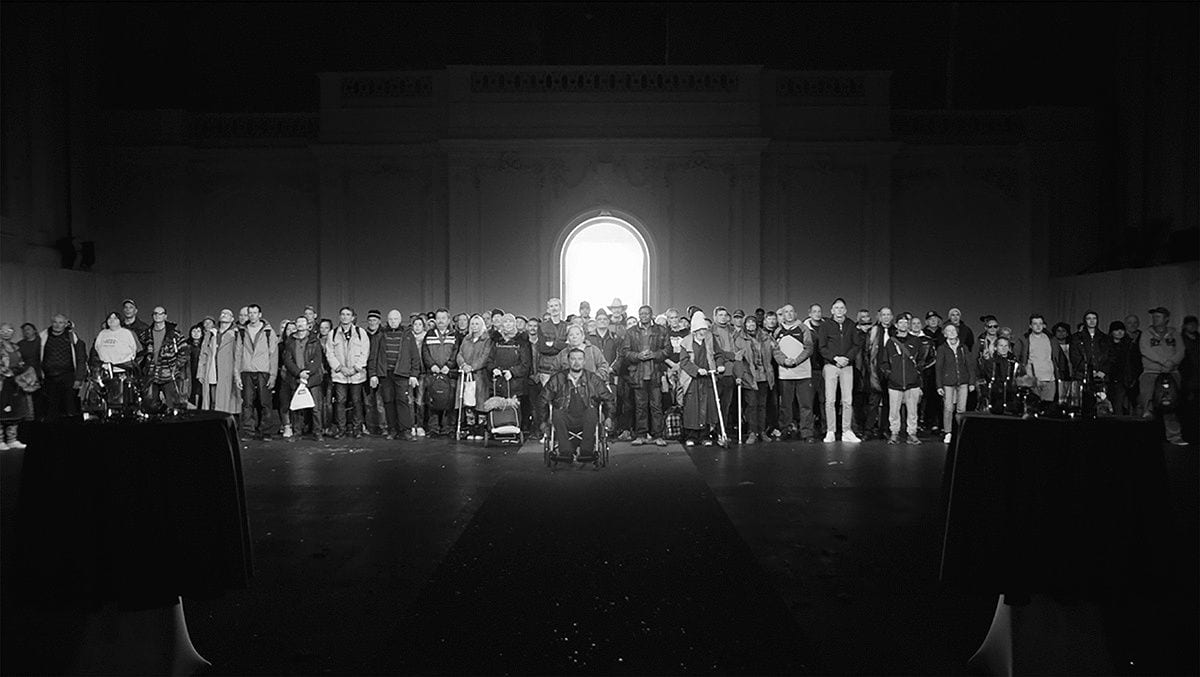 We are invited to sit together, face each other, in a setting resembling the most honest of Tarr locations: the pub. Melancholy is heavy in the air, in the expressions of one another’s faces. It is difficult to say anything. The moment lends itself to drinking, though there are non-alcoholic options too. After some time I go to the bar and order. Béla Tarr is standing at the counter, drinking a beer in perfect unity with the mood.

Although sad, the performance is not about hopelessness. As in Tarr’s films, the drinkers amongst his character are philosophers who ponder life, who seek solutions. Physically and symbolically, we are brought together, and it’s up to us what we do with it while the homeless people watch from the large screen on the wall. Later, with most of us still there, someone catches sight of the director leaving and begins applauding. Everyone joins in, but Tarr just waves his hands thankfully but dismissively while he’s making his escape. Briefly, he stops at the door, turns, and points to the screen, to the seemingly never-ending gallery of faces, the end credits of people who were with us during this experience as if from a seance.

This is not about him. Before turning around to disappear, still pointing to the screen, he adds: ” Never forget that.”