I’ve become preoccupied with two films that fascinatingly document time and place: Richard Linklater’s Slacker (1990), and Edo Bertoglio’s Downtown 81 (filmed in the early ’80s but released in 2000), starring a then-unknown Jean-Michel Basquiat. Having recently watched Downtown 81 on the big screen for the first time, I was struck by how similar in tenor it is to Linklater’s ground-breaking movie. It’s almost as if Linklater was indelibly influenced by the scrappy urban fairy-tale made in the 1980-1981 era.

The parallels between
Slacker, set in Austin, Texas teetering on the brink of the ’90s, and Downtown 81, which takes place in early ’80s New York City, are striking. Indeed, unorthodox ideas can emanate from minds daringly unfettered by constraining precepts.

Unlike
Slacker, Downtown 81 has an actual plot, albeit a flimsy one. Its plot is subjugated to the unkempt visual aura of ’80s-era Lower East Side New York City (graffiti-scribbled subways and structures, ruins resembling blitzkrieg-era London). There are many other divergences between the two films, but the convergences provide intriguing fodder for cinephiles to feast on.

Both movies exult in protagonists who inhabit starkly urban environments: the bohemians, the artists, the misfits, the freaks and weirdos.They both use era and settings as explicit and enticing backdrops. After all, both cities were glorying in pre-gentrified dishevelment. In the case of NYC’s Lower East Side, there’s the “war-zone” milieu, upping the ante from gritty to just plain eerie.

In Downtown 81, Basquiat’s Jean is an emerging artist. He’s perpetually broke, a hapless but happy nomad who wanders the streets mingling with druggies, musicians, and graffiti artists. Along the way, he spatters the city walls with his tag-hieroglyphics. Meanwhile, the characters in Slacker live in cheap-rent dwellings and have a similar vagabond spirit as they float through various regions of Austin where they encounter other wildly off-kilter characters. 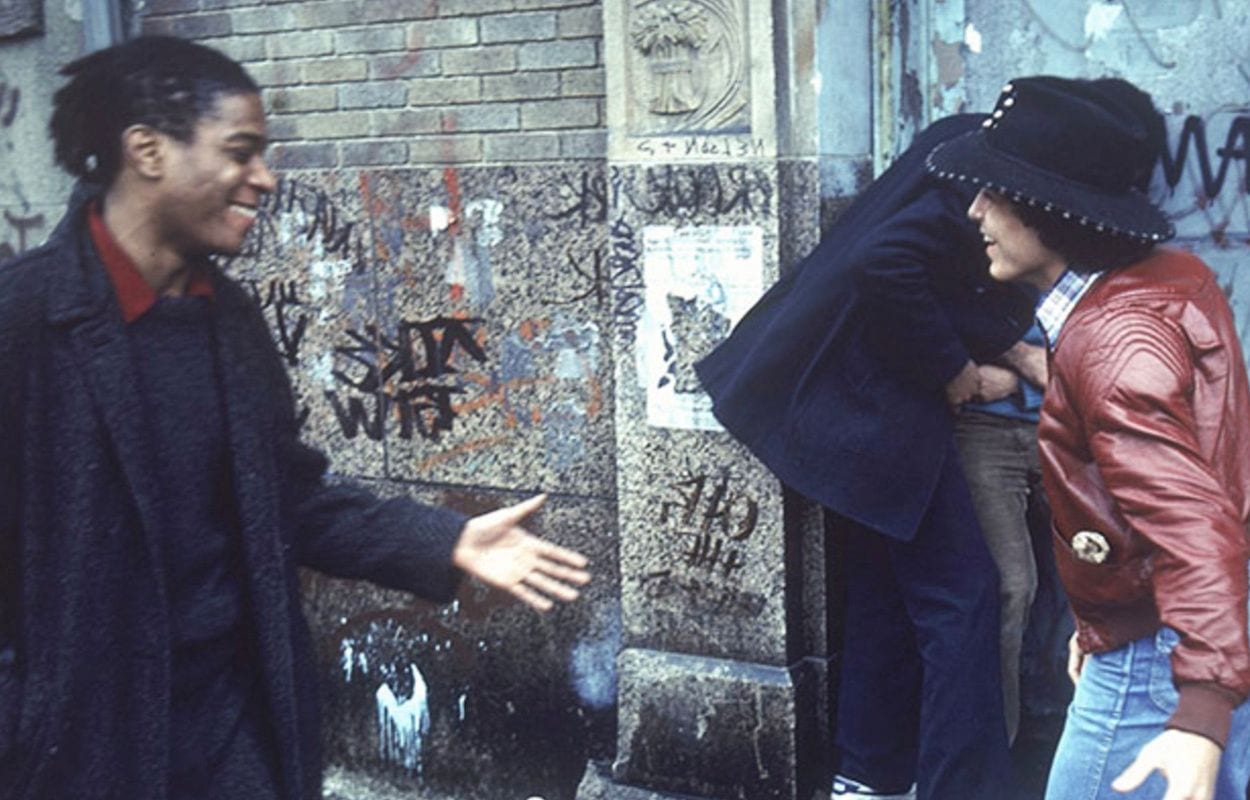 The peripatetic spirit of the two movies lends them a dreamy quality, though if forced to pigeonhole into genres, it would be fair to say that Slacker is surrealistic while Downtown 81 is magical realism. Slacker‘s multifarious personae can be unsettlingly jagged, whereas Downtown 81’s characters are ethereal and yet ultimately rooted in reality — most are real-world artists and musicians on the verge of greater renown.

In Slacker, conversely, the characters are obstinate oddballs — some of whom actually played in Texas bands at the time but are otherwise anonymous. Both movies showcase characters who are blissfully aimless, anarchic souls discretely or overtly spurning a predictable, soulless society.

Another far less explicit, even amorphous similarity between the two films involves their respective influences. Slacker — in particular, its meandering tone — was inspired by French New Wave movies such as Godard’s Breathless. Downtown 81 was invigorated by the New York music movement No Wave, which reveled in atonal discordance. Bands like DNA, James Chance, James White and the Blacks, Tuxedomoon, Suicide, and Lydia Lunch appear on the soundtrack and in some cases, in the movie itself.

Indeed, Downtown 81 concentrates on showcasing music and musicians. In addition to No Wave, there’s the burgeoning hip-hop scene, genre-defying bands like Kid Creole and the Coconuts, and even Blondie appears in a kitschy cameo. Other luminary and inventive artists, filmmakers, and writers such as Fab 5 Freddy, Amos Poe and Glenn O’Brien also make appearances.

Slacker‘s main claim to fame comes in a more academic incarnation: Louis Mackey, a well-known philosophy scholar at UT Austin (now deceased). But to its (musical) credit, the movie features (in character guises) local luminaries in the form of the Poi Dog Pondering vocalist, the Butthole Surfers’ drummer, and several Glass Eye musicians. 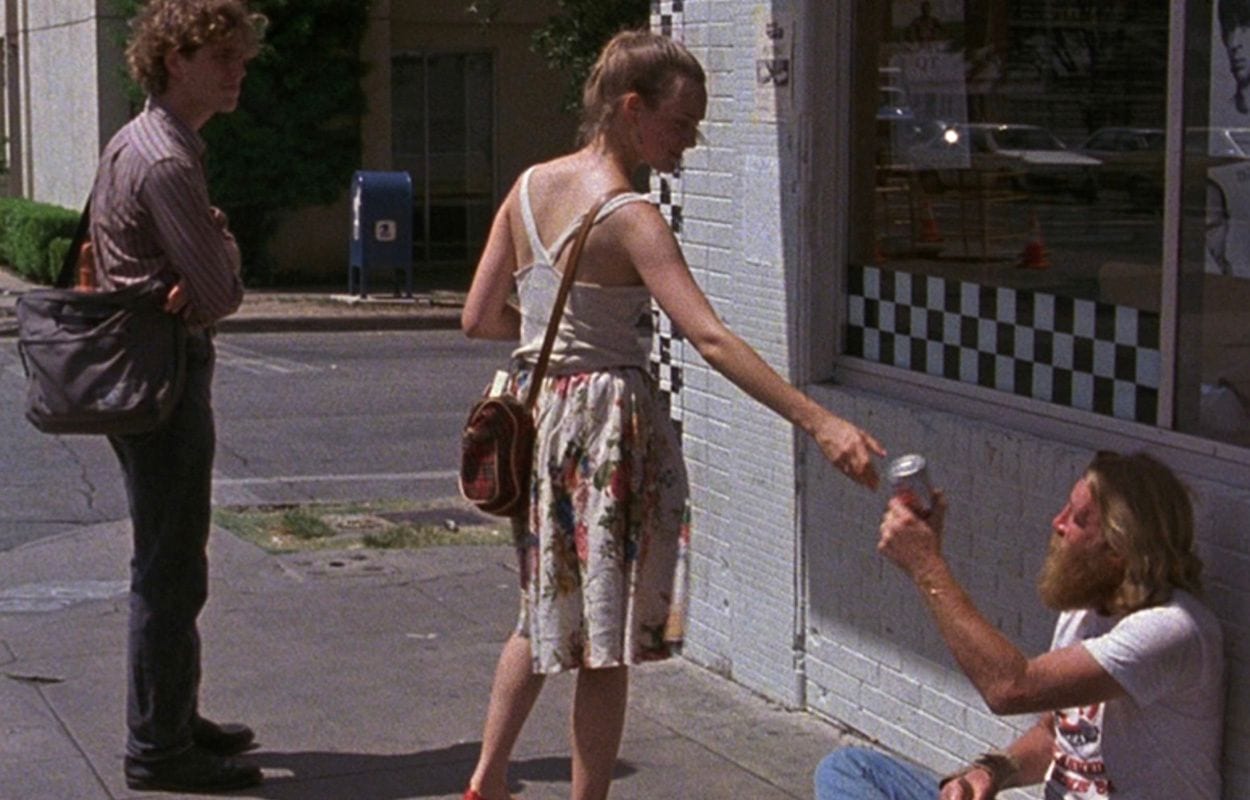 At the time of filming, Austin was cherished for its live music scene, funky aesthetic that can best be described as “cowboy bohemian”, and reputation as a progressive oasis in a stubborn GOP stronghold. NYC, naturally, was internationally iconic, and needed no elaboration.

Both cities have now transformed into less-intriguing-but-still-interesting places. Both are corporatizing and homogenizing in dismaying ways that engender nostalgic memories of their more colorful pasts. Happily, we can “visit” these cities during their more dilapidated yet hipper incarnations via Slacker and Downtown 81.