Sometimes a text that seems difficult at first encounter can prove to be the most rewarding, especially if it’s set aside after reading and allowed to percolate in your mind. In the latest edition of the Best American Comics series, now in its 13th year, series editor Bill Kartalopoulos writes in the Foreword that what we’re about to read is “…an art form of simultaneity.”

Obviously, we read text and absorb images simultaneously. The traditional comics form of rigid isolated panels, usually of the same size, to be read from left to right like a narrative, has long since changed. Digital comics can adapt to their formats (small phone screens or wide desktop screens) and the quality or tone of the stories expressed are able to reflect that new liberation. This edition’s guest editor, Jillian Tamaki, notes: “There are so many ways to make us care about little marks on a page.”

What is this difficult to which I refer? Maybe its found in the challenging, brash attitude of the teenaged self-educated artists, who’ve absorbed everything online and are eager to tell their stories. Maybe its sensed in the challenge from contributors whose “…thirst for stories from marginalized voices” — it’s up to you to keep up with them. Tamaki notes: “…are the institutions that produce and profit from these works populated by similarly diverse people? What does responsible commodification of identity look like?”

These are indeed valid concerns Tamaki brings up in her introduction. Some may fear that different and diverse voices will become distilled, into something bland and universal when collected in anthology form, but volumes like these always strike a careful balance. Tumblr might have driven “…the final nail in its own coffin in terms of relevancy” by banning pornography in 2018, but all imaginable forms of explicit content will still find their way to a public eager to soak up the images and text.

There are more than two dozen selections in this anthology. The reader not deeply enmeshed in the world of contemporary American comics might be frustrated that over half of this book’s content is comprised of excerpted material. However, for the most part, these excerpted entries work.

Vera Brosgol’s Welcome to O.R.R.A. (taken from Be Prepared) is a heartfelt, warm, and at times beautiful slice of memoir from the author’s time at a Russian Orthodox Summer Camp. The young girl’s eyes are big black marble-sized orbs, their roundness emphasized by her round glasses. She prepares for camp from the relative brightness of her home only to be plunged deep into a forest camp environment where the big girls yell at her to stay out of their stuff. It’s one of the better self-contained excerpts that give the reader a sense the the source material is even stronger.

Remy Roydell and Michelle Perez’s Sex Positive (excerpted from The Pervert) features two dogs (drawn as humans) encountering each other. One is a sex worker, another is a client. It deals with issues of sexual identity, intimacy as commerce, and what the sex worker notes at the start as a “noncommittal attitude towards the law.” It’s a lonely and haunting piece that will compel the reader to seek out more work from these artists.

Laura Lannes’ By Monday I’ll Be Floating in the Hudson with the Other Garbage (excerpted from her eponymously titled book) is a traditionally-formatted comic that brings us into the life of a woman in an open relationship with a man. It’s interesting, but there’s no sense of completeness in this selection. If there is to be a sense of dread (and why not?) then a wider spectrum of the source would have helped. 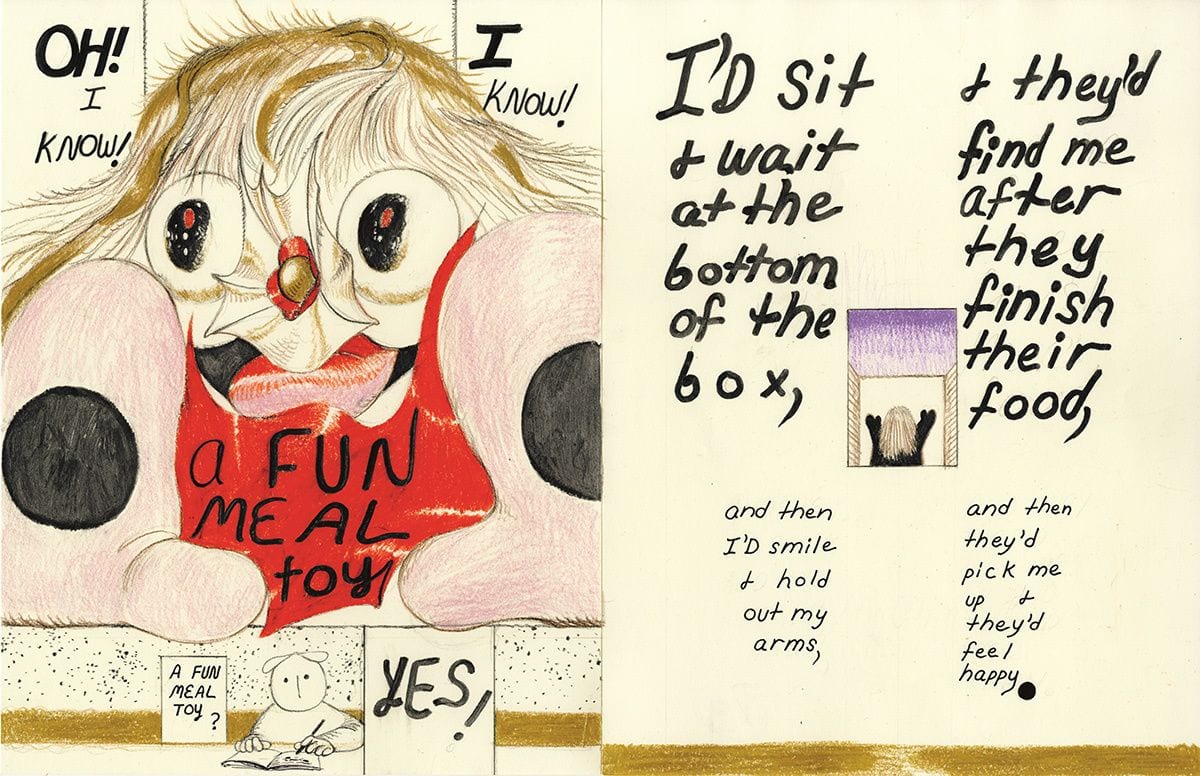 It’s the self-contained solo works like E.A. Bethea’s Bit Rot that prove frightening and compelling. The writer notes in a statement of explanation (such statements precede seemingly all the selections here) that “…I typed out a stream of consciousness. It was about degradation in its many forms: digital, sexual, corporeal, and mental. It was about being real…” In the next two pages there is much more text and images that evoke outsider artist Howard Finster: “Where will all my emails go?” Mario Cuomo, Andrew Cuomo, and Charles Mingus all share space in this contemplation of being and nothingness.

Some of the other stronger self-contained efforts include Anatola Howard’s Self-Love Cycle, where a man raising and then marring a baby clone of himself becomes more natural than it seems in writing. Leslie Stein’s Vanguard is a beautiful evocation of the Village Vanguard in Greenwich Village, New York City, painted on light tan paper, in shades of pink, red and yellow. When the young character finally enters the club, she starts to think about how everything is just about the feeling one has.

Lauren Weinstein’s Being An Artist and a Mother tackles the risk of creatively disappearing altogether while attempting to be both things. Weinstein notes that there were no women comics seen as “Masters” in 2006. Her inspiration after seeing a particular Paula Modersohn-Becker painting (recreated here) is palpably felt.

In Small Mistakes Make Big Problems, Sophia Foster-Dimino goes deeper into her subject than most contributors here, and the results are commendable. Originally published as a stand-alone selection in Comics for Choice, this selection covers the life and times of a woman in her early 20s dealing with an unwanted pregnancy. The final page of this autobiographical comic features Foster-Domino on a bike, cycling into the unknown, covered by dialogue panels. “In my mentally ill state I perceived my abortion as a failure to serve my purpose,” she writes. “…I have been working on processing my abortion compassionately.” It’s a beautiful, triumphant way to end something that could have spent its ten pages wallowing in moroseness. 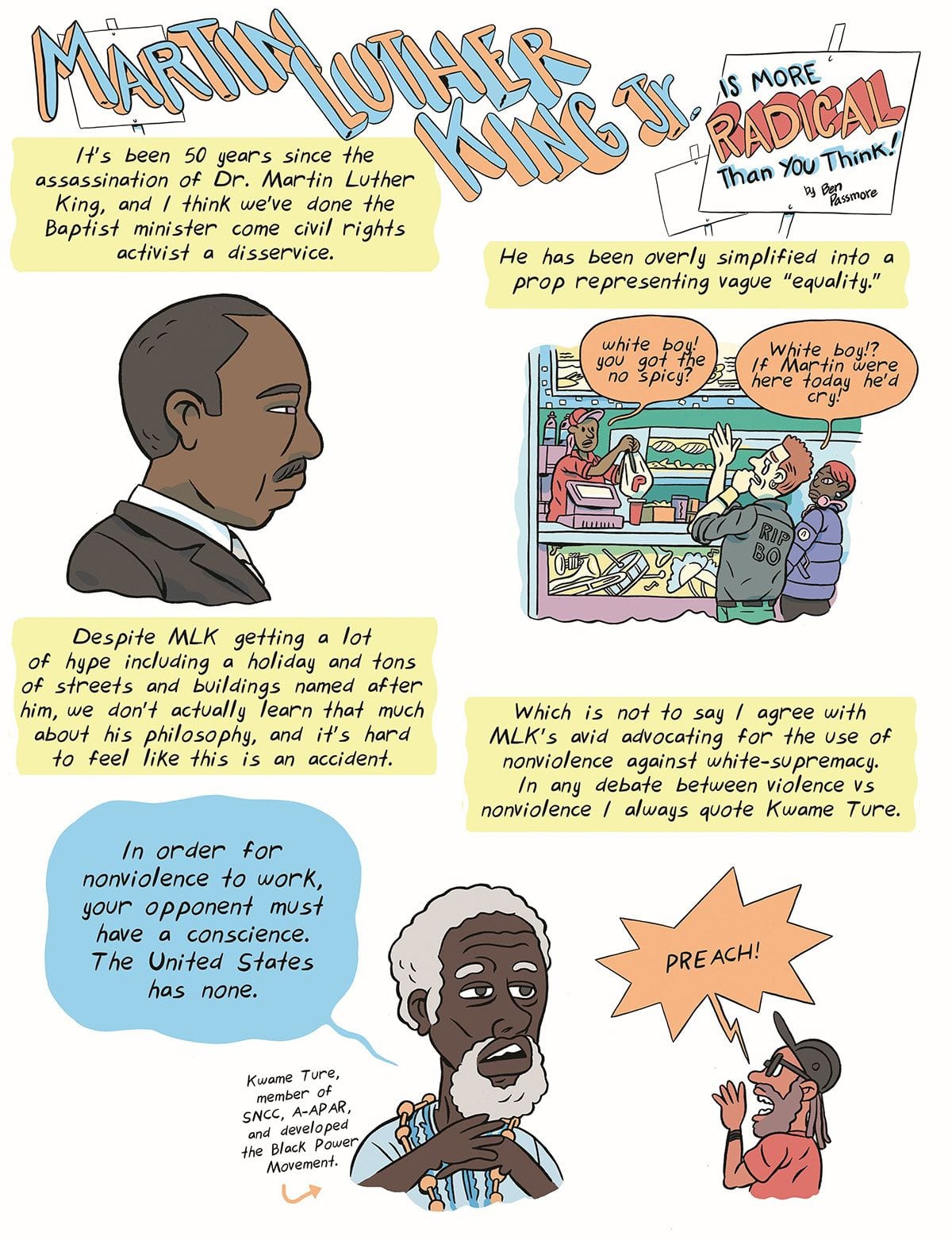 Ben Passmore’s Martin Luther King, Jr. Was More Radical Than You Think is another politicized piece that will probably both surprise young readers and refresh the hearts and minds of older ones who need a reminder of King’s tough approach to civil rights, especially in his final years. Passmore writes in his statement: “…I wanted to put the teeth in Martin Luther King, Jr. because he gave us ours.” Passmore’s strip draws a vivid through line from the impression of King and his legacy as seen through members of Black Lives Matter and others.

Angie Wang’s beautiful In Search of Water-Boiled Fish is my favorite. It’s a gorgeous fantasy, originally published online in an “infinite canvas” format with a continuous scroll reformatted for this book. The adaptation does not ruin the effect because from the first of its 38 pages we are immediately absorbed into two small characters (the author and her father) walking among dishes filled with Chinese food. Angie floats through the air, dives into soup, slides down bowls, and never loses sight of her dream to find the perfect Chinese food in the United States:

“But I kept searching, ordering, eating, being disappointed….”

“I don’t care about authenticity,” she writes as she slides down the throat of a random person. “I’m not trying to find the original version…I’m looking for my own history, displaced by time and the Pacific Ocean. You live in a place that you come to think of as home — and you eat the food again…until it becomes a part of you. The body remembers what home tastes like.”

It’s a gorgeous, almost heartbreaking way to look at authenticity in cuisine and meaning in any given text. As we see the young Wang still searching for the perfect meal, we find ourselves feeling equally connected with some of the best selections in Best American Comics 2019. They might not all go down easy. Some might be undercooked, some left too long on the fire, but the strongest ones (like In Search of Water-Boiled Fish) will satisfy for a long time.