I believe the silent cinema, as with animation or documentaries, is a medium unto itself that deserves to be considered separately from mere vulgar talkies. Beautifully restored and with specially composed scores, here are ten gems from the era of pure spellbinding cinema that made their Region 1 debut on Blu-ray this year. As I don’t much cotton to the idea of one being better than another, they’re presented alphabetically.

This year I was privileged to preview the offerings at the
San Francisco Silent Film Festival, where audiences viewed such masterpieces as The Love of Jeanne Ney (G.W. Pabst, 1927), L’homme du large (Marcel L’Herbier, 1920), Tonka of the Gallows (Karel Anton, 1930), Rapsodia Satanica (Nino Oxilia, 1917), The Home Maker (King Baggot, 1925) and The Wedding March (Erich von Stroheim, 1928). Here’s hoping Blu-rays follow. (Kino Lorber has previously released the Pabst film on DVD, so there’s that.)

Finally, here’s a shout-out to
Grapevine Video, a small operation quietly transferring its public-domain silent prints on Blu-ray. They, too, deserve your support. 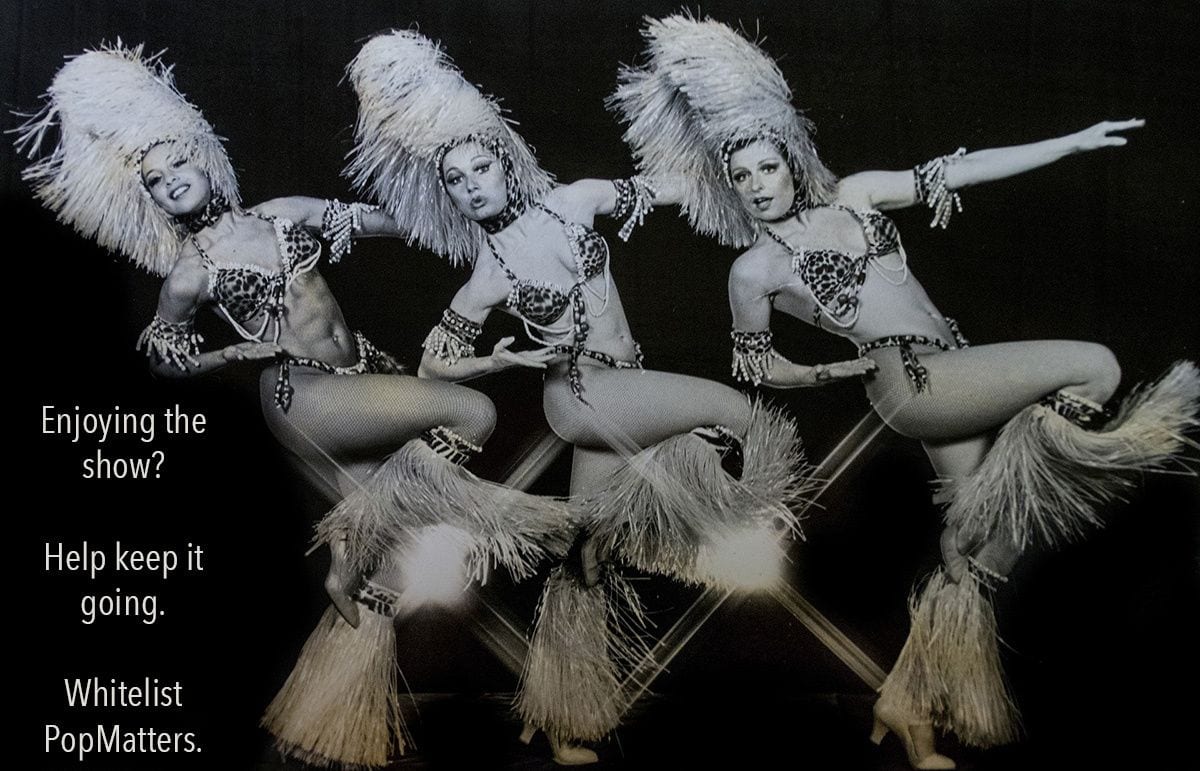 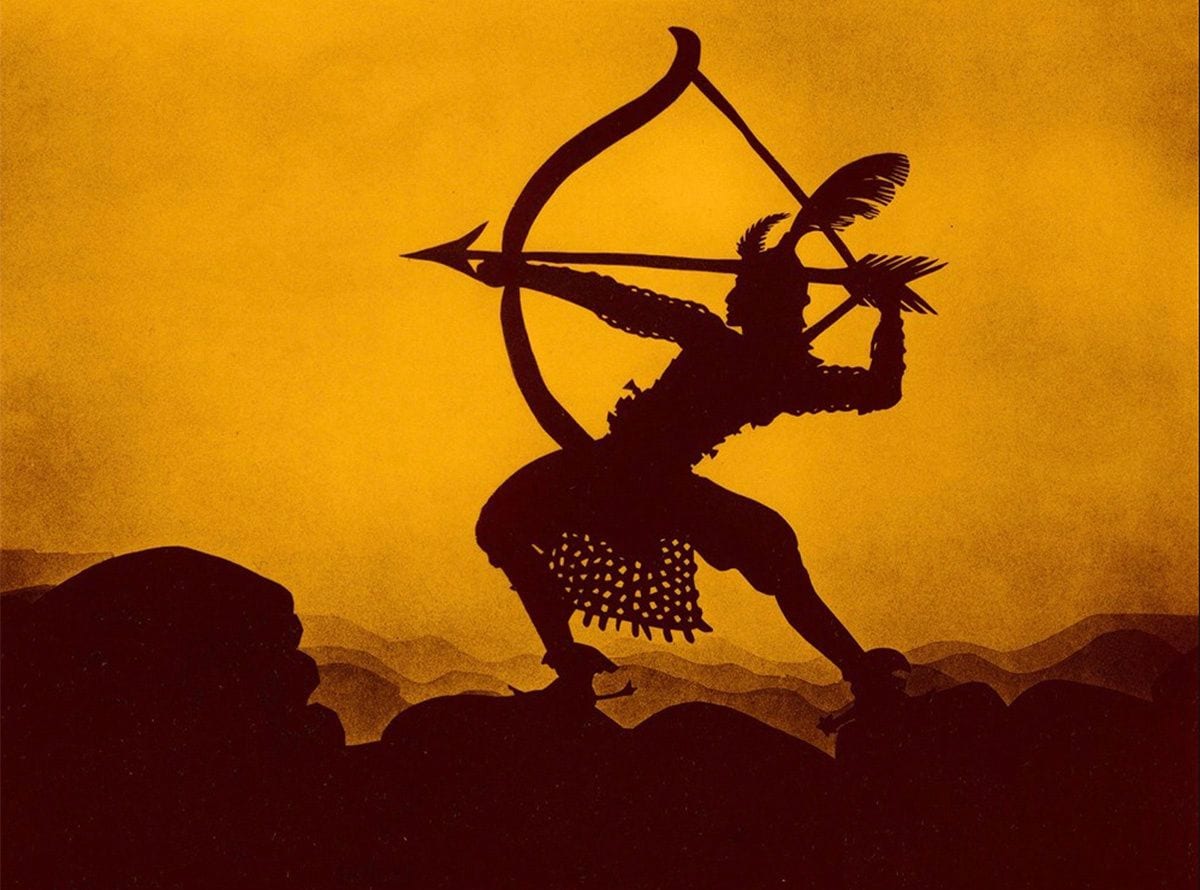 Lotte Reiniger was an extraordinary magician of cinema. Creator of silhouette animations that she called shadow plays, her most famous and magnificent achievement is The Adventures of Prince Achmed. Various sources have claimed it as the world’s first animated feature. It’s certainly the earliest surviving one, and utterly gorgeous in this restoration. 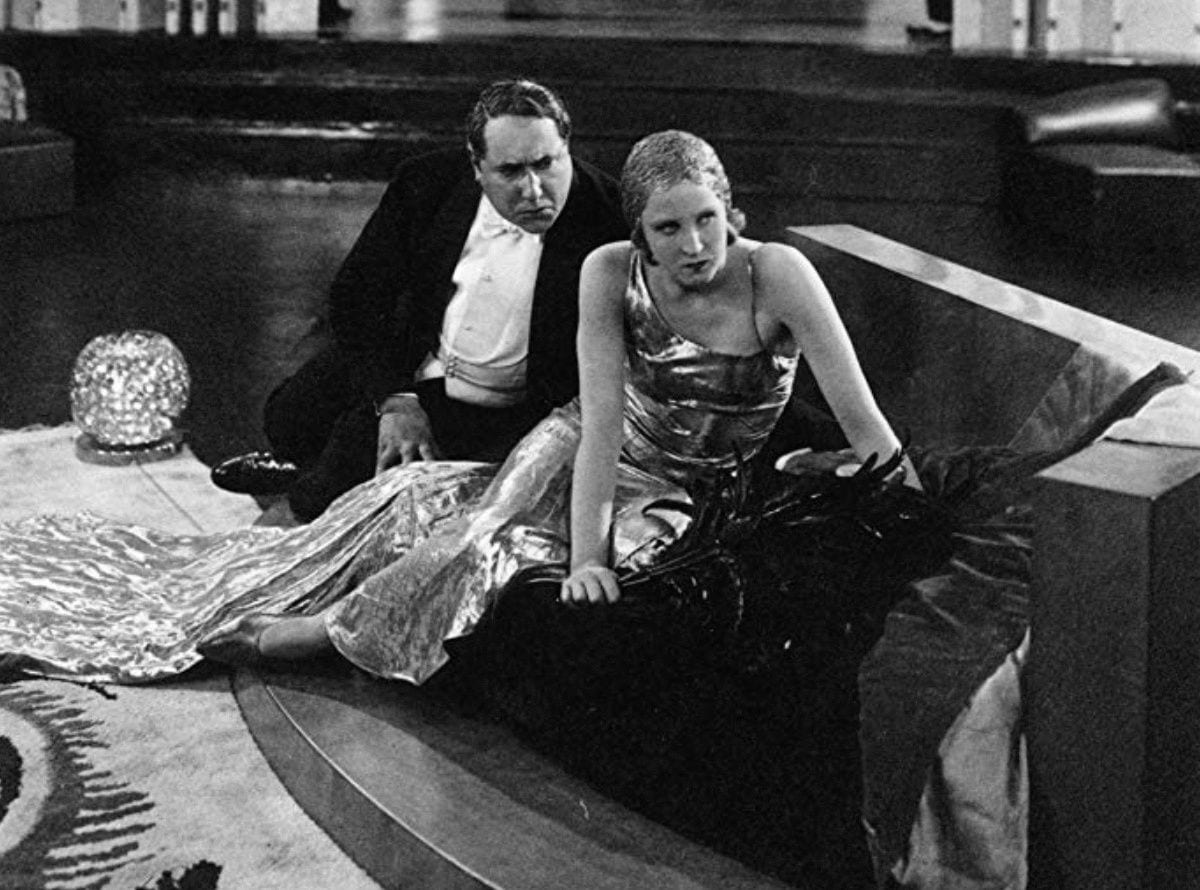 L’Argent is a world of zig-zags of fortune, swirls of fate, daredevil flights, breathless radio announcements, and high-kicking charlestons performed on a plank over a fountain by the uncredited Dolly Sisters. All this amid sets as monumental as any in the era’s German films. This film is a magnificent, and prescient, spectacle of greed and excess. 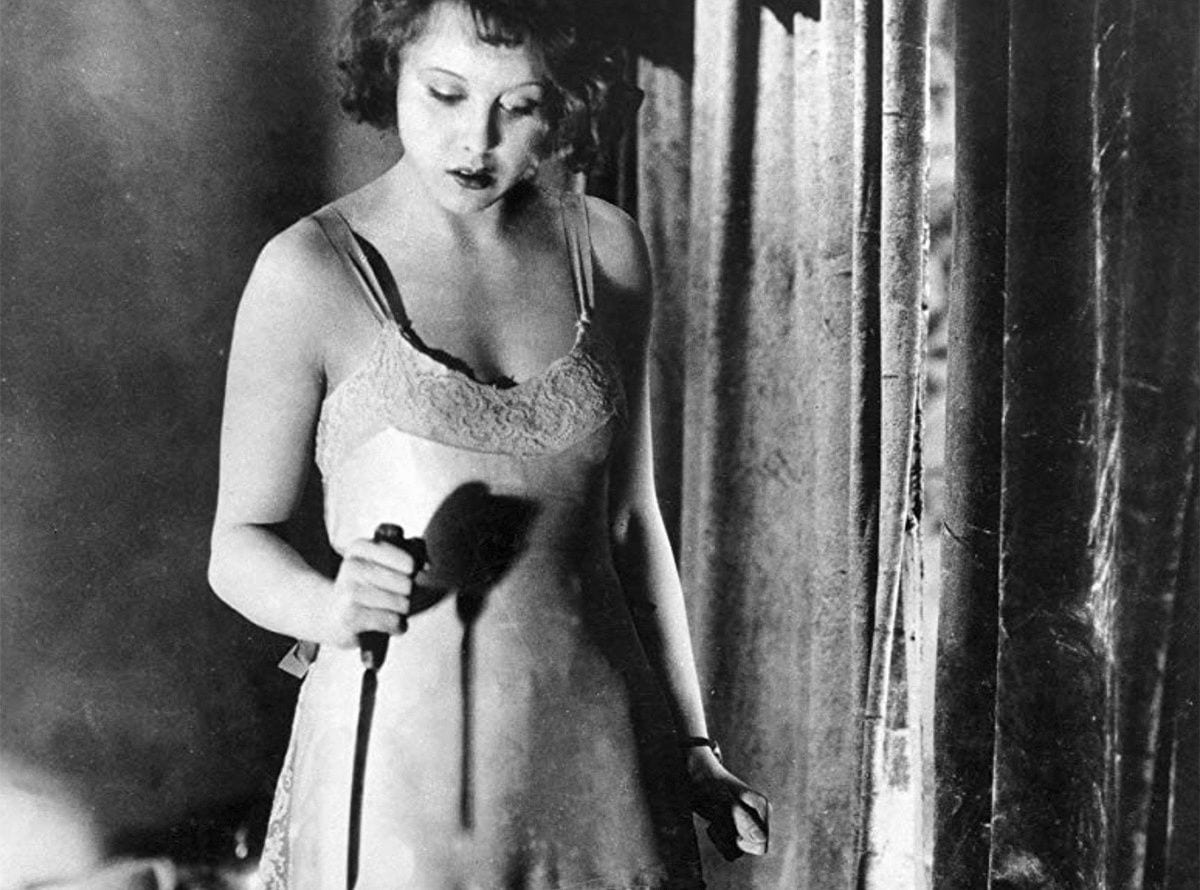 Based on a play by Charles Bennett, Blackmail constitutes the start of Bennett’s collaborative association with Hitchcock. Many moments in this movie foreshadow later key moments in other Hitchcock films. The struggle behind the bed-curtain foreshadows the shower curtain in Psycho. The close-up of Alice’s hand reaching blindly outside the curtain and grasping through the air, while the viewer sees a bread-knife in close proximity and wills for her to grab it, echoes a similar moment in Dial M for Murder. 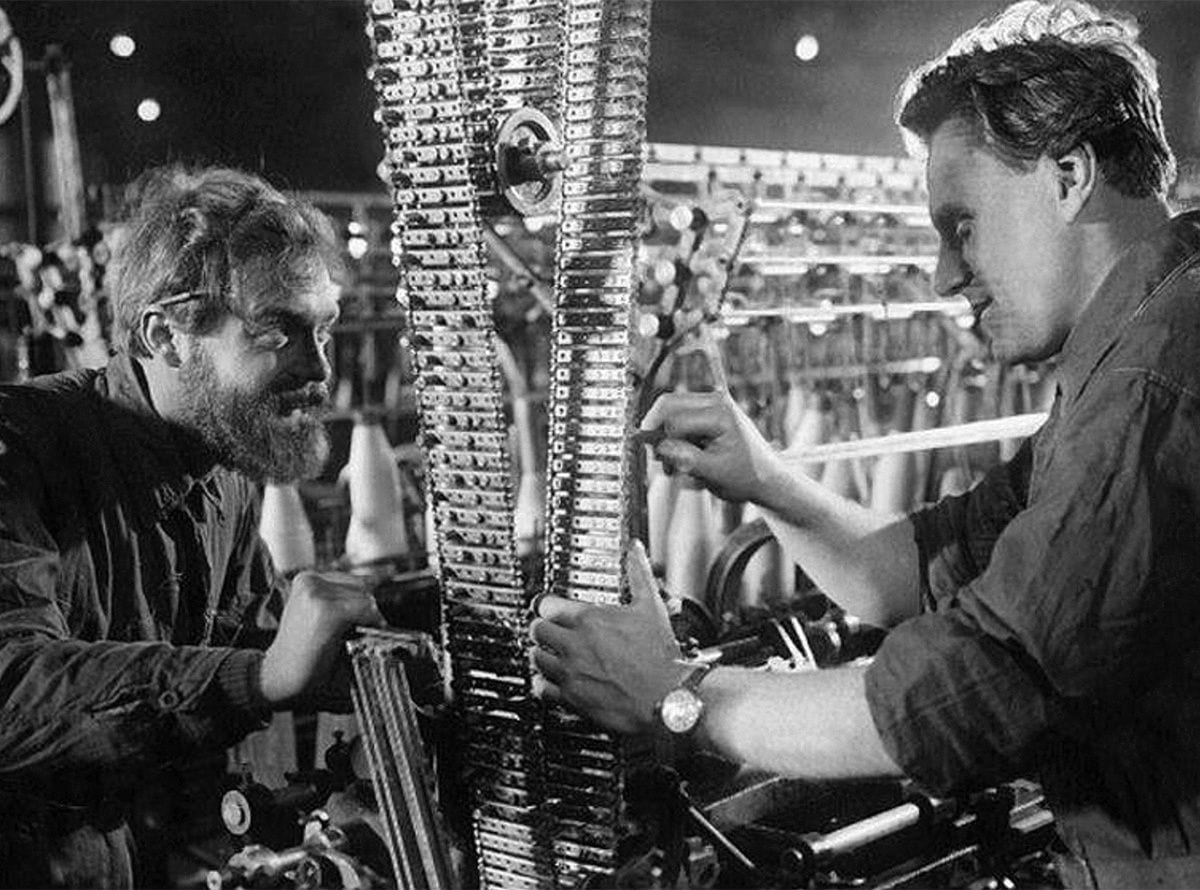 Fyodor Nikitin (L) in Fragment of an Empire (IMDB)

Fragment of an Empire fuses several elements: avant-garde editing, psychological drama, overt propaganda, old-fashioned coincidental melodrama, self-conscious symbolism, moments of sheer grotesquery, and even a kind of fairy tale. In a plot that is simple, absurd and moving, Fyodor Nikitin brilliantly plays four proletarian figures in a sequence of brazen showmanship. The film embodies the paradox of Director Fridrikh Ermler, whose status as a fully committed communist allowed him to get away with films in which he admits the problems and casualties created by building the workers’ state 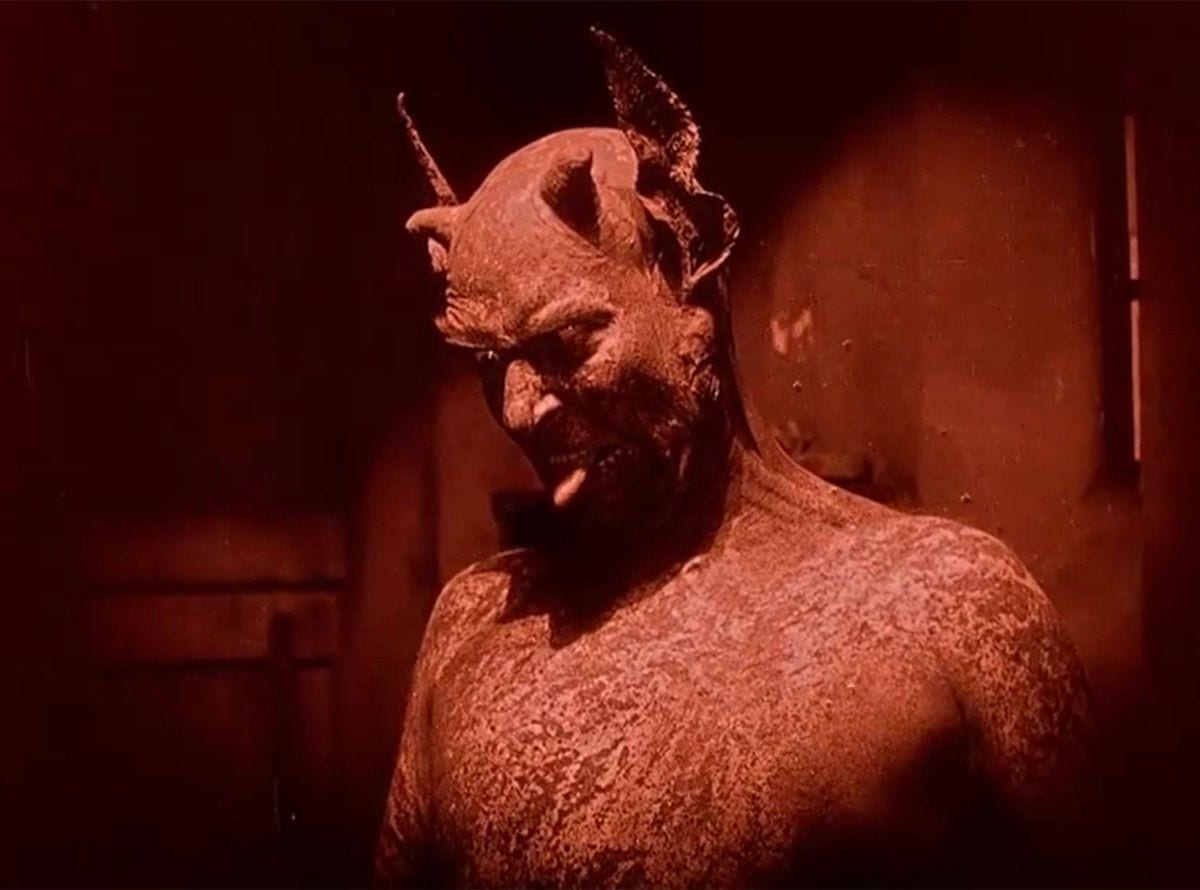 This Swedish-Danish production remains one of the most peculiar fabrications of silent cinema. Benjamin Christensen created a documentary essay about witchcraft by exploring its lore through what we now call dramatic recreations or docudrama. The results are strange and spooky visions of witches’ sabbaths. Satan himself is played by the director! All manner of nudity and perversity that got the film banned or censored are here, while the titles speculate on the nature of belief and draw parallels with modern psychology. 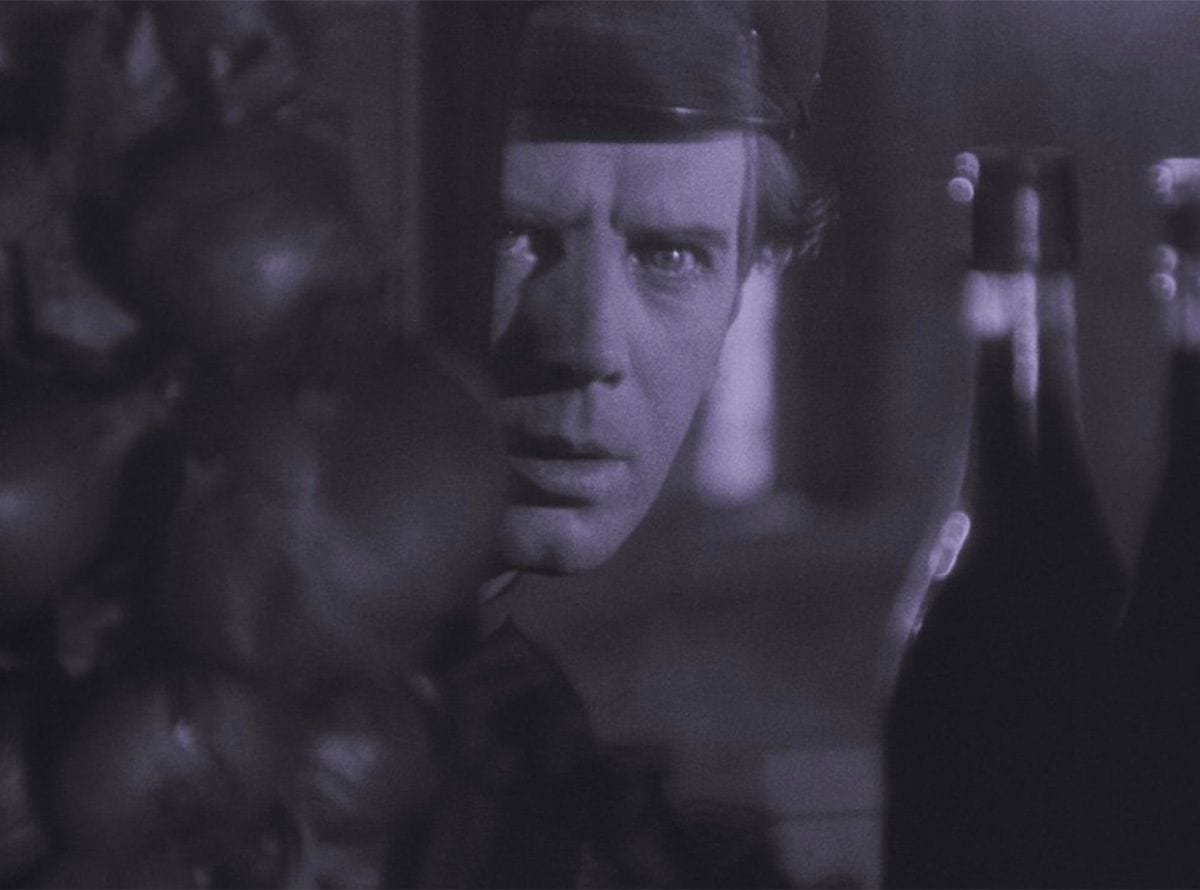 Lars Hanson in The Informer (IMDB)

Director Arthur Robison’s film is superbly made and continually fascinating. Its greatest moment of visual bravura is the scene where Gypo (Lars Hanson) implements his impulsive decision to “blab” to the police. The camera follows behind him as the shot evolves from his lone figure in the dark to the center of a bustling crowd, even though he’s now in the act of alienating himself permanently from that crowd. It feels too much to suggest that this movie, on which several German artists worked, might have influenced Fritz Lang’s much darker M (1931), but you know, it might have. 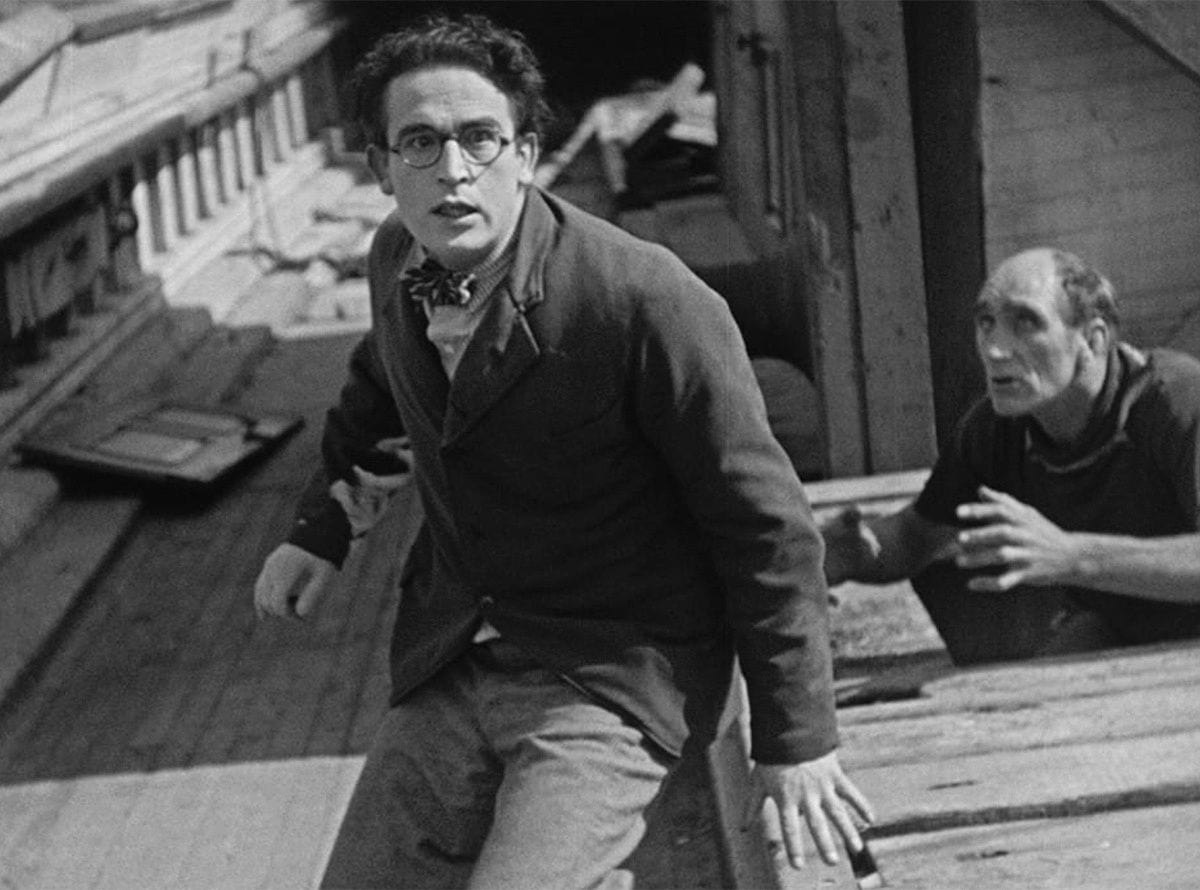 Harold Lloyd’s The Kid Brother is a beautiful bit of bucolic comedy, equal parts innocent romance and “local boy makes good” with a sidestep into near-horror. it works well as entertainment for modern audiences, for whom its calculated old-fashioned corn and apparent simplicity aren’t a problem but par for the course. Harold Hickory (Harold Lloyd) achieves his cathartic redemption amid a reasonable portrayal of small-town suspicions, gossips and rivalries, not to mention action-packed cross-cutting at the climax. 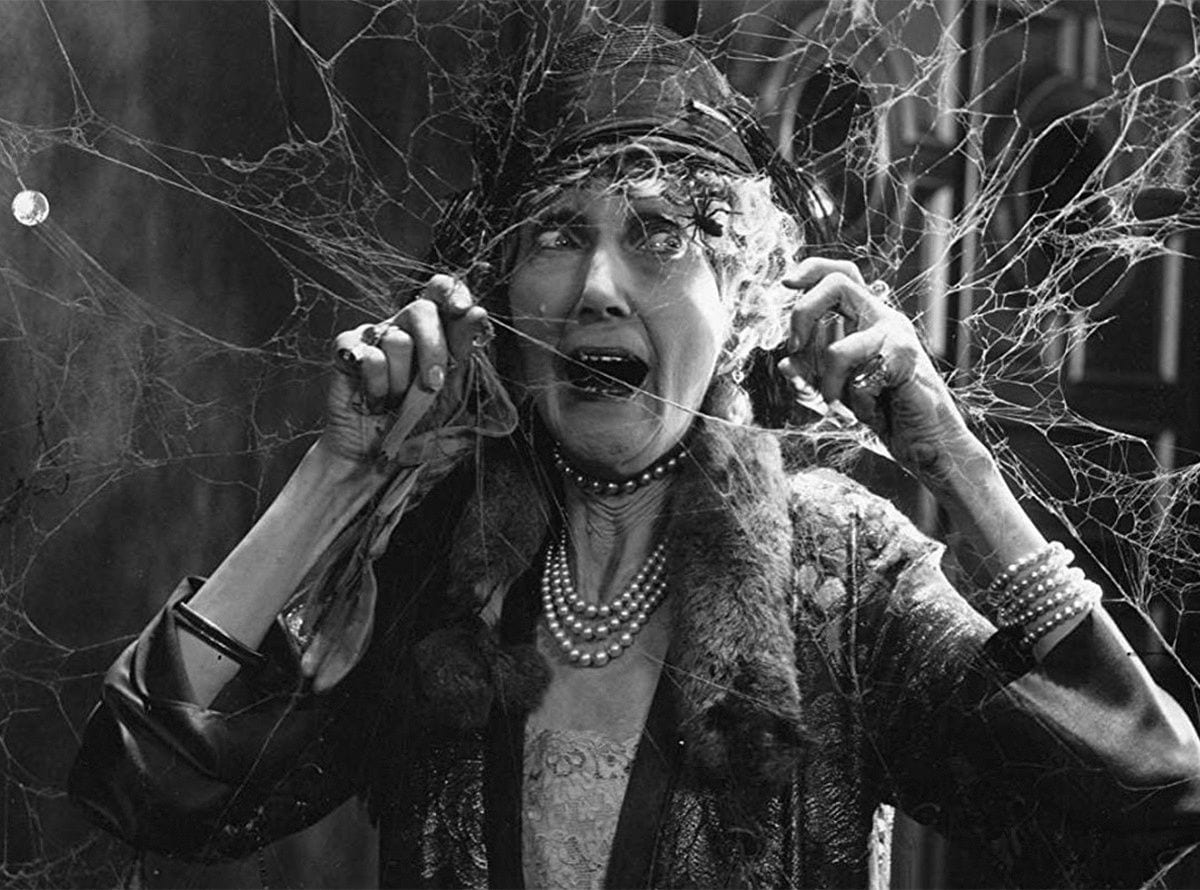 The Last Warning is a witty, visually dynamic movie in which the hectic goings-on are continually japed by comic-relief characters and droll effects. It’s about an “old dark theatre” in parody of Phantom of the Opera. In the opener, an actor dies mysteriously in the middle of a performance, and soon the body disappears in the course of a single shot. A few years later, the abandoned and cobwebbed theatre is re-opened by a new producer, with everyone recalled to re-enact the fateful play. 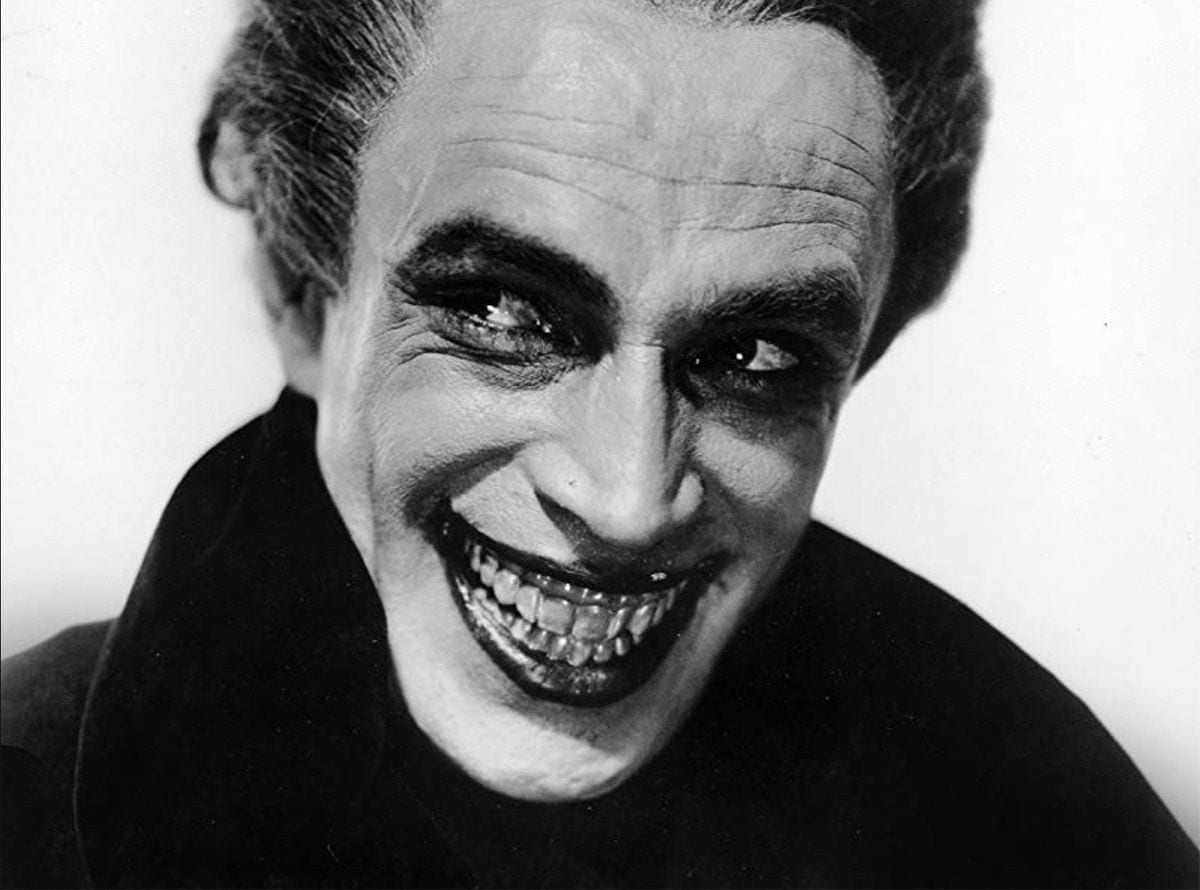 Conrad Veidt in The Man Who Laughs. © 1928 Still courtesy of Universal Studios (IMDB)

Based on Victor Hugo’s 1869 novel, The Man Who Laughs is a grotesque, oppressive, uncanny near-tragedy about acting and masks and, above all, cruelty. Our hero, Gwynplaine / Lord Clancharlie (Conrad Veidt) is rarely ever happy, much less laughing. Tears often quiver at his ducts amid the pancake makeup, for one effective aspect of Veidt’s performance is that he also keeps his eyes wide open. His grimace is both true and false, thus paradoxical. 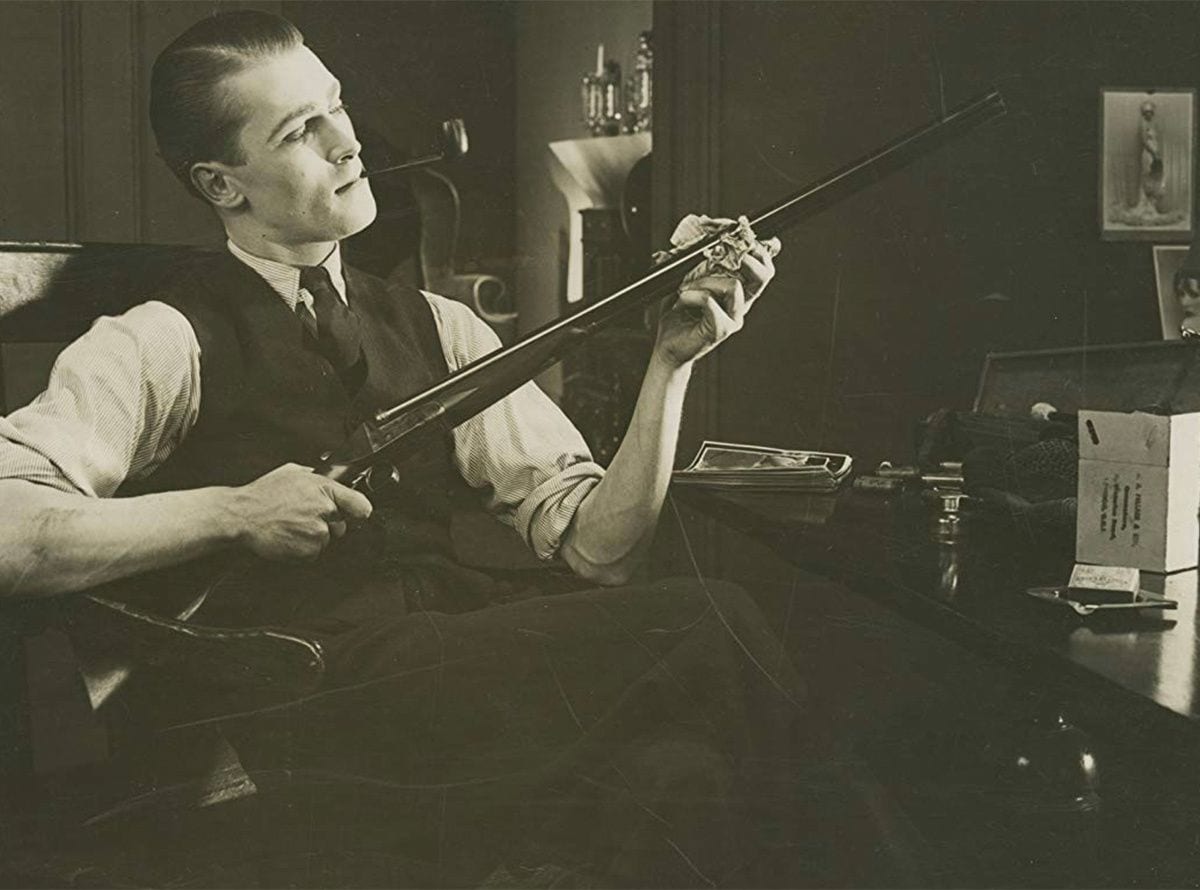 From the opening shot, Shooting Stars is commanding, teasing, lovely and humorous. We witness a corn-fed cliché about a sweet little darling in pigtails, her lipstick applied in a pursed bow to the middle of her mouth, sitting in a leafy tree while mooning and spooning with a handsome cowboy in a ten-gallon hat and elaborate spats, presumably while seated on his horse. But the cowboy is on a sawhorse, the tree is equally phony, and the whole scene is a movie in production. This film involves much business with a key and lipsticks that resemble bullets, a point made when Julian (Brian Aherne) loads one into his long, gleaming, freshly polished shotgun. Director Anthony Asquith’s silents are full of these eye-catching moments.