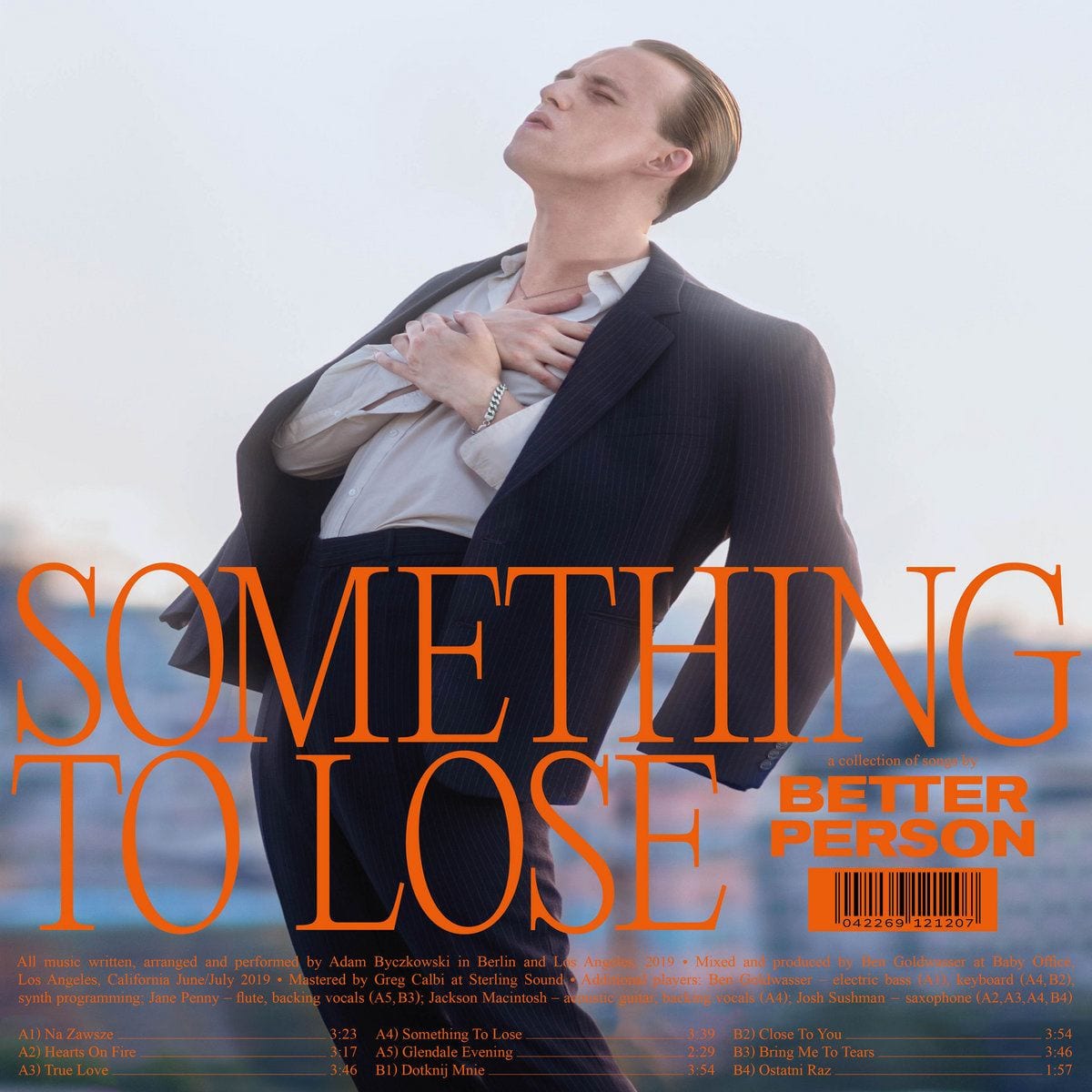 Electropop has many iterations, but possibly the most over-obsessed and tediously written about is the type that evokes the FM pop of the 1980s. Its revival started innocent and fun, but the critical reaction has started to turn towards vitriol. The feelings have shifted, and something that sounds so decade specific doesn’t have the appeal it had just ten years ago. Better Person, the music project of Berliner by way of Poland, Adam Byczkowski, doesn’t care about this though and leans heavily into the era’s common sounds and tones. Yet, Byczkowski has quite a force of will, and by being authentic to his art, takes the tools of an earlier era and rises above with an elegant, romantic record. Better Person’s full length debut, Something to Lose, has execution and sophistication reminiscent of the best artists to ever touch a pre-programmed synth.

Better Person’s early works sounded much the same as Something to Lose, at least on the surface. Take the 2015 single “Sentiment”. The music’s tonality is much the same, with the song beginning with a heavily reverbed drum kit, followed by the introduction of a keyboard bass and some airy synth pads. Yet, Better Person’s pre-Something to Lose work has a noted difference in tone. It’s darker, much starker in its presentation of sadness.

For a vibe check, watch the video for “Sentiment”, where Byczkowski stands alone in a park and stares at the camera with a face that could be described as little outside of ‘irked’. That’s it. That’s the whole video. Like ‘Sentiment”, most of Better Person’s previous work could be a cousin to darkwave, yet it stays on its side of the line of FM pop through its straightforward presentation of mostly unadorned synths and pre-programmed tones.

Something to Lose is a different version of Better Person, though. It’s sunnier, happier, more likely to make a dance move, or at least something more than a dead-on camera stare. Take the second track, “Hearts on Fire”. It begins with a bouncy beat adorned with the lightest of synths. It details lovers’ travels together and adds in a smoky sax line to clarify: this version of Better Person is feeling alright for once. “Close to You” rides a similar vibe and beat and details a deeply felt love. Elsewhere, “Glendale Evening” sounds like Eno at his contemplative best, and “Bring Me to Tears” is Blue Nile with a different singer.

The titular track, “Something to Lose”, is about just that, something to lose. Byczkowski is digging into that feeling of purpose. The feeling of having something to think about while you’re at work. That little daydream of making dinner with your partner. That little memory of the time you went to the grocery store and dropped a bottle of wine in the aisles and looked at each other and just laughed. It’s a purpose for waking up and a purpose for getting good rest. Better Person is feeling better. The music is pretty good too.