It’s difficult to believe it’s been 14 years since the city of Bilbao first came up with the idea of hosting its own music festival. It turns out that one well-eroded mountain slope and a bit of logistical goodwill works wonders for one city’s economy and culture. Nearly a decade and a half since inception, Bilbao’s BBK Live is the largest cultural event in Northern Spain (Catalunya notwithstanding). Repeatedly voted “best European mid-sized festival” at the European Festival Awards, this gem of music and partying has fully grown into its own, hosting some of the world’s most lauded acts while maintaining accessibility and affordable tickets for all. Radiohead, Metallica, Red Hot Chili Peppers, Pearl Jam, Depeche Mode, Coldplay, the Cure, Kings of Leon and Arcade Fire are just some of the names that graced the grassy hilltops of Mount Cabetas with their presence in the past. Now that BBK Live contributes more than €20 million to the city’s economy and has a steady streak of lauded headliners lined up every year, event success is all but guaranteed.

The beginning of this year’s edition did not disappoint. On Thursday, about 36,000 flocked to the slopes of Mount Cobetas to enjoy a night of traditional rock and (semi)novel and experimental electronic music. While the hill is located on the outskirts of the city, it takes only about 30 minutes to reach it from the center, first by taking the subway for two to five stops and then hopping on a free bus by the San Mames stadium. Given the festival’s undeniable impact on the city economy, the logistics are supported by the local government and are impeccable – the subway runs all night throughout the festival, an affordable taxi service is provided, while the free buses actually run continuously, counting more than 20 vehicles transporting people to and from the hill all night long.

Typically for Iberian events, the main program does not start until late at night, so there is no rush to up the altitude before nightfall, and Bilbao is wondrous in itself, offering exquisite food and plenty of enjoyment for tourists. Once transported uphill, one gets to enjoy some truly astonishing scenery – the entire Bilbao metropolitan area, with city lights and the estuary of Bilbao stretching to the Bay of Biscay, merges with the green fields and plains of the Basque mountains, enclosing the festival grounds. Horses graze on the grass, and village dogs holler between themselves while thousands of soon-to-be-inebriated enthusiasts sit just outside the flashing lights of the festival entrance arches, chugging whatever alcohol they brought with them. 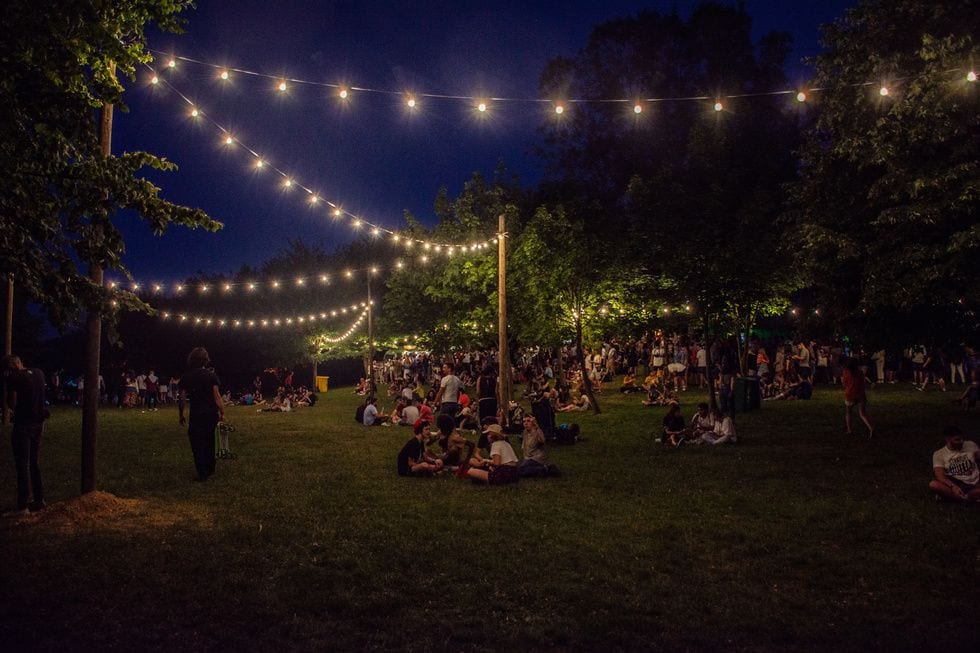 Inside, it gets even better, as festival infrastructure blends seamlessly with nature. Strings of lights and lit-up installations guide the way between enclosed hilltops, on which the seven stages sit amid naturally chiseled rocks and grassed slopes on which guests can enjoy concerts in a horizontal position, over a burger or a beer. Food and drink stands are laid out between and around the stages, and the offering is solidly diverse, ranging from hot dogs and burgers to sushi and waffles. A large beer is €8 though, which easily explains why so many chose to drink on the outer side of the fences, while there were seldom more than three to five people queuing to get some booze at the event. A backlit installation of a howling wolf sits atop the highest gravel wall. The crowd is as diverse as it gets, some (younger) there to party until the morning with the DJs, some (older) congregated to witness Thom Yorke’s newest project – and some (mixed) interested in the unhinged rock gospel of Liam Gallagher and Slaves. 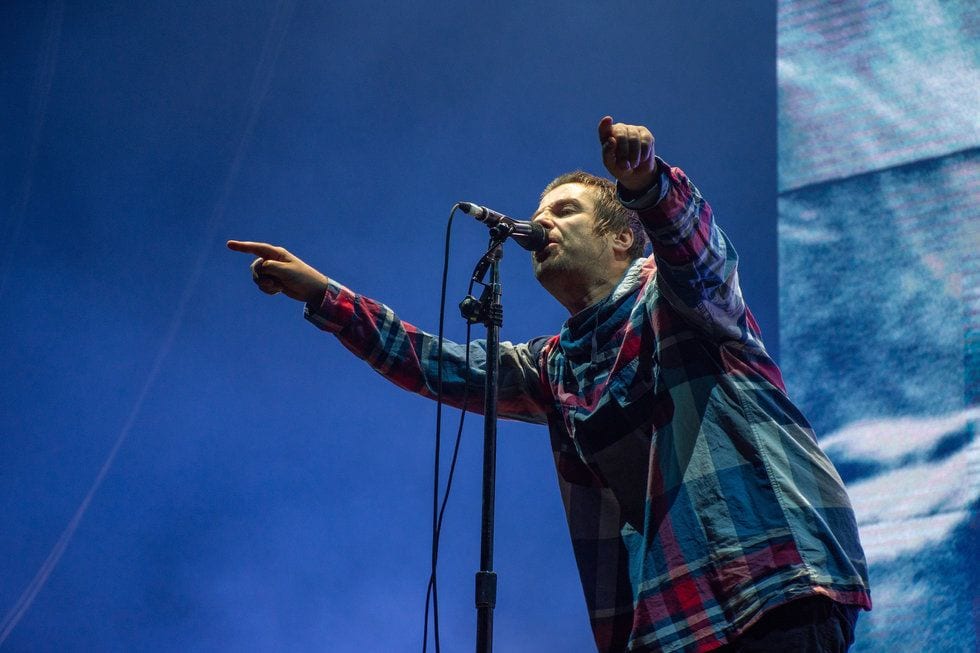 Unfortunately, we are too late to witness the glory of John Grant but are told by the more seasoned crowd it was another “prophetic performance” from the indie veteran. Our night kicks off some time after 8:00 pm, with another indie voice – the Spanish sextet, Vetusta Morla, who brought their melancholy rock to thousands of youngsters squeezing in front of the main stage. With a set full of tunes from their 2017 release, Mismo sitio, distinto lugar (“Same spot, different place”, roughly), vocalist Pucho and friends thank the crowd for “choosing culture in dark times”, and call for more support for arts and culture from the state. BBK Live gets the credit here for promoting the local music scene uncompromisingly, with Spanish performers appearing on stage side by side with the international headliners daily. The Basque crowd seems to appreciate this greatly.

Just after the sun had fully settled, the Berlin-based German composer, producer and an outspoken devotee of vintage electronic gear, Nils Frahm, takes to the second stage, Bestean (from this year, all seven stages bear indigenous Euskara names). His moody, stripped-down, lo-fi performance reminiscent of Trentemøller’s work, provides a welcome intermezzo between the many rock shows of the night, with the crowd stretching out across the fields and the smell of aromatic grass spreading all around. 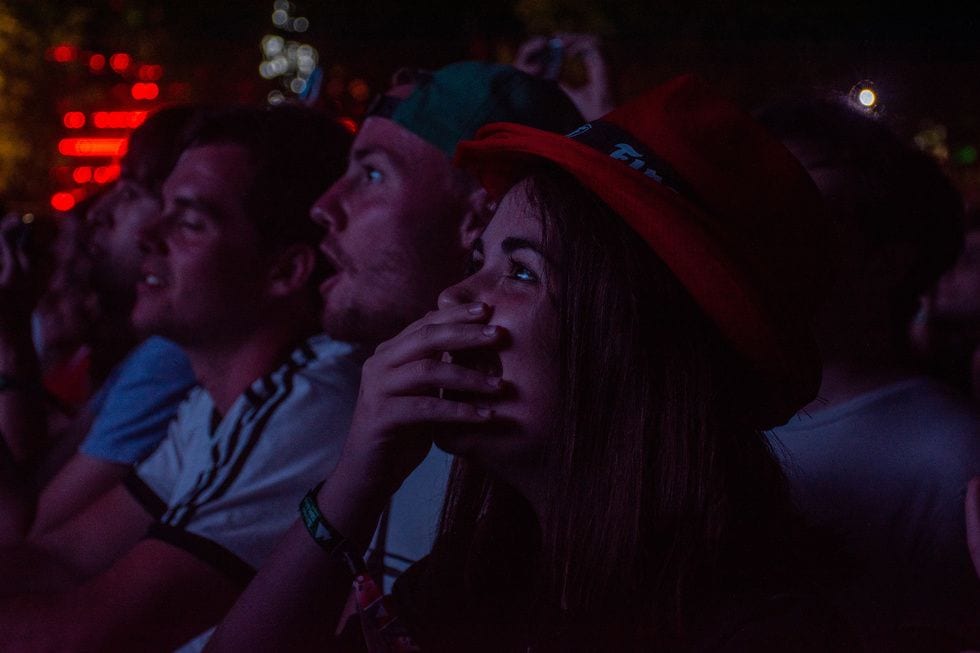 Of the headlining acts, the younger of the Gallagher brothers is the first to shake up the completely enchanted masses properly. The largest crowd of the night flocks by the main stage, Nagusia, and with countless young faces among them, it is evident that Oasis songs still resonate with the younger generations. Several teenagers start to cry and shriek with joy as soon as the slouched Gallagher walks onstage, with his instantly recognizable hostile glare, directed at nobody in particular; the rest chant and scream “ole, ole, ole” to the recording of the Manchester City’s premiership-winning canto.

This exaltation works well for Liam Gallagher, who has failed to produce any acclaimed work, or change his overtly aggressive and bickering personality, over the decade or so that Oasis has been defunct. Still foul-mouthed and full of inarticulate rage he is all too happy to share with the media regularly. Nowadays he is perfectly content to revel in the glory of the songs his older brother, Noel, wrote, even though years ago he swore he would never perform them live. Expectedly, it is Oasis hits that make up most of the setlist and provide all of the night’s singalongs, with “What’s the Story (Morning Glory)”, “Supersonic”, “Rock ‘n’ Roll Star”, and “Wonderwall” seeing the mob jump and sing in unison. “There are many things that I would like to say to you, but I don’t speak Español” almost ruins the most-beloved karaoke song of all time, but it’s past midnight, and the crowds don’t care.

Everybody stays in good spirits throughout, while a select two thousand or so migrate to the Txiki stage to go berserk with Slaves. Isaac and Laurie are at it again, with another fist-and-blood-pumping insanity galore; there is no middle ground with this duo and everyone in attendance is well aware of that, ready for mosh pits and unhinged cacophonies. The punk duo’s songs overflow with energy, merging to create a transcendental state of absolute suffering (actually the name of one of their songs). They are alone on the stage, dripping with sweat, banging furiously on the drums and guitar, while exploring the topics of working-class disenfranchisement and the everyday socio-economic struggles of the underprivileged. Their overly corporal approach works, not despite the aggression and a lack of performance articulation, but rather because of it, and their fans showed up expecting precisely what they have been given. 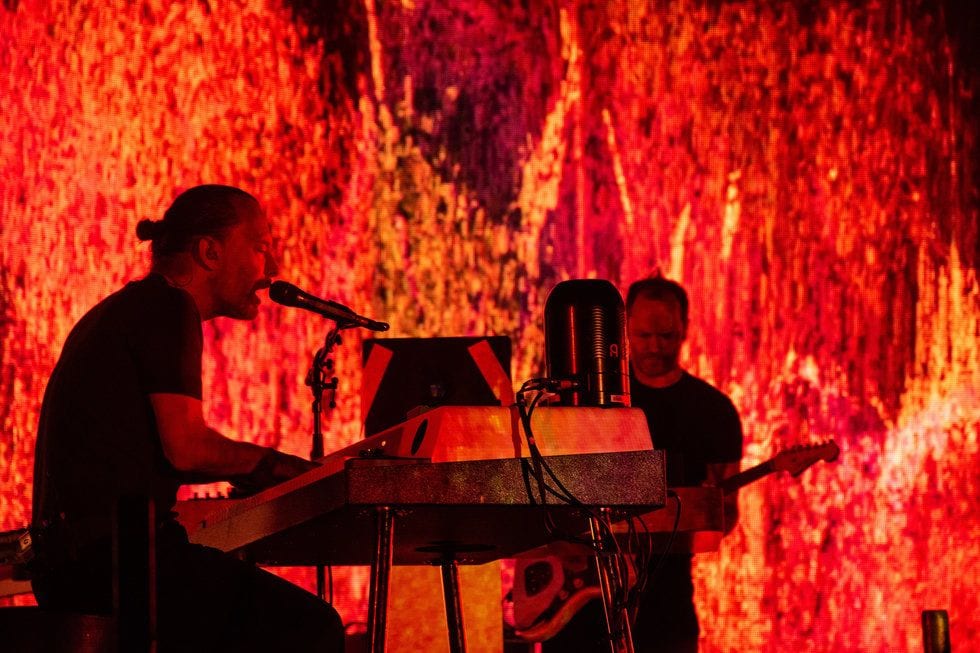 Elsewhere, hundreds of, I’ll just say it, predominantly middle-aged people in Radiohead shirts, expect Thom Yorke to appear alongside Nigel Godrich for what they believe will be an electro-rock culmination of an energetic night. Before we move on, let’s just say they were in for a massive aural surprise. At exactly 12:40 am, sporting baggy trousers and a ponytail, a smiling Yorke emerged beside the long-term Radiohead producer (and his Atoms for Peace bandmate), Nigel Godrich, against a humongous screen projecting borderline nightmarish, abstract imagery.

On stage, Yorke and Godrich are all about deep minimalist beats and expansive singing which acts as an instrument in itself, given that the keyboards and guitar are seldom used (hence the surprise for some) in this “live mix” of snippets of Yorke’s opus. The majority of the songs come from Yorke’s third solo release, Anima, an even-more-hermetic-than-his-previous-electronic-works concept album detailing a metaphysical struggle caused by a literal “loss of dreams”. It is undoubtedly a high-concept work, accompanied by a well-publicized campaign for the fictional ANIMA Technologies, which promotes itself as a company able to “return the dreams you cannot remember”.

As Yorke cynically explains, this easy way out is another dead end, as the fans would call a number listed on the ad or visit the “company website”, only to be told that ANIMA had received a cease and desist order and would be discontinuing all its activities. This bleak version of the present is further enhanced by a 15-minute video, directed by Paul Thomas Anderson, in which Yorke struggles to find love and meaning amid a literal wave of humans effectively turned into automatons, going through the motions of everyday routines in dancing synchronicity. 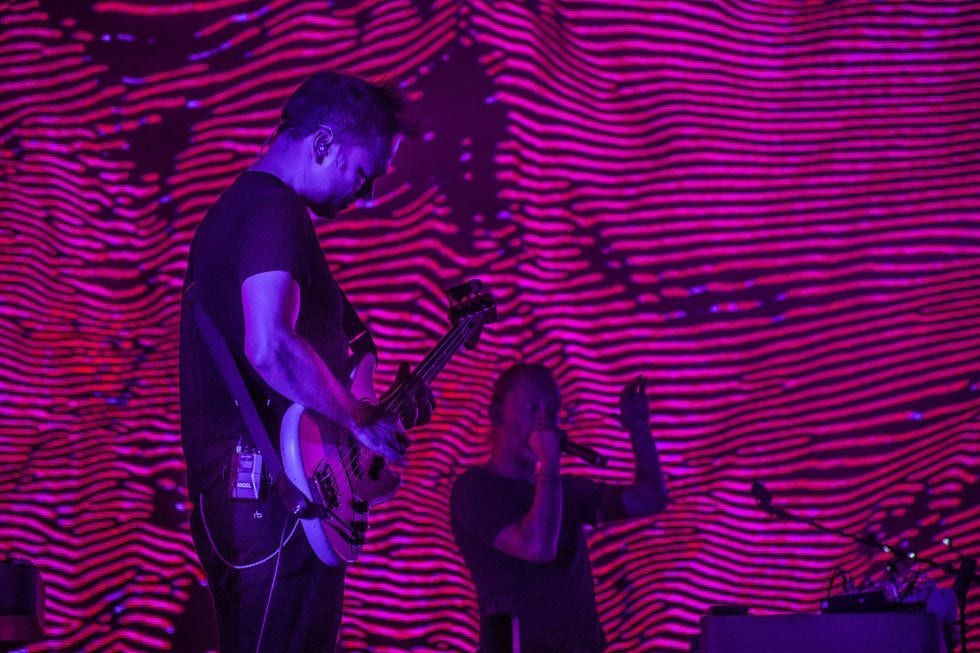 If the above, very abbreviated background for this tour, sounds confusing, things only get more complicated when Yorke and Godrich get the live mix going, complemented by the Dutch visual artist Tarik Barri, who provides live visuals to their explorations of the soul. There is no clapping between the songs, which, curated live, blend into one long emotional rollercoaster of a tune, with Yorke offsetting the machine-based beats and melodies with his unique voice, effortlessly switching from hushed mumbling to a clear falsetto. This mash of the robotic with the profoundly human is the cornerstone of the songs, which seek to portray our everyday struggles to connect with one another, however, the crowd comes alive predominantly when Yorke drops a heavy beat or starts dancing animatedly, twisting and jumping across the stage, gesticulating and convulsing haphazardly. The ominous “The Clock” sees Yorke sing with full lungs for the first time during the performance, while the few other older solo songs or melodies off his first film soundtrack effort, from Suspiria, are mostly edited to fit a more beat-based performance. Heavy beats and glitchy images take a short break during “Dawn Chorus”, a completely stripped-down keyboard tune overflowing with melancholy and echo for which Barri provides a black speck on the screen which grows to become an ever-expanding corona, draping the screen in black and Yorke with it.

The culmination, if one can call it that, comes with Atoms For Peace’s “Amok” and “Not The News”, taken off of Anima. Both songs progress from funky rhythms to outright agonizingly nightmarish climaxes, with Godrich speeding up the machinery while Yorke amps up the vocal cords, mimicking the distorted guitars with his screams. The final song of the night is Atoms for Peace’s much-loved “Default”, which allows for a more straightforwardly rock finish to the show, though it has to be said Flea’s bass lines are missed here. All in all, it’s wonderful to see that one of the most famous artists of our time uses his fame to produce avant-garde materials and contribute to the contemporary cultural discourse in myriad ways.

Just after 2:00 am, Thom Yorke’s favorite act, the German electronic duo Modeselektor, start engaging the still-strong crowd at the main stage with a heavy live set of their eclectic opus. Snippets of Happy Birthday, their seminal album, protrude behind layers of fizzy beats and their tempo is, customarily, fast and militant enough to keep the most persistent enthusiasts throughout the night. Unfortunately we are spent and this point and it’s time to head back to the buses – or camps, and get some rest before The Strokes’ headlining performance on a sold-out Friday.