Friday kicked off slow in Bilbao, save for the only two Starbucks in town, where throngs of young campers rushed from the slants of the hills in Kobetamendi to wrestle for the half a dozen or so sockets to charge their electronic devices. The city of Bilbao (metropolitan area excluded) counts only about 350,000 people, but looks like a metropolis nevertheless, with gorgeous, lushly decorated buildings, surprisingly wide streets and impeccably groomed parks with lots of flowers. In the spirit of the Spanish culture, with bars aplenty, it seamlessly accommodates several tens of thousands of predominantly Spanish and UK tourists. There is also the Old Town, where the more culturally sensitive flock to the limestone edifices in different shades of beige, visiting churches and the oldest local restaurants. In any case, there is no crowd and one can enjoy their day in the sun – unless they really need to charge their phone first.

The second night of the festival was, in theory, supposed to be more of a challenge than the first. With the sold out-day announced, meaning that 40,000 people would be heading uphill between 9:00-11:00 pm, the queue for the buses at the San Mames stadium stood at a 100 yards and the prospects for getting to the festival in time to photograph Rosalía looked pretty bleak. However, exactly 11 minutes later we were already on the bus – dozens of festival staff coordinated exact numbers of passengers to be seated in the buses which truly were arriving in continuity. The same was true for the taxis, which waited outside of the festival and would only take passengers from the front of the queue (say three to four minutes to get a taxi with about 40 people waiting ahead of you). A massive applause for the organizers and the city chiefs who support the efforts. 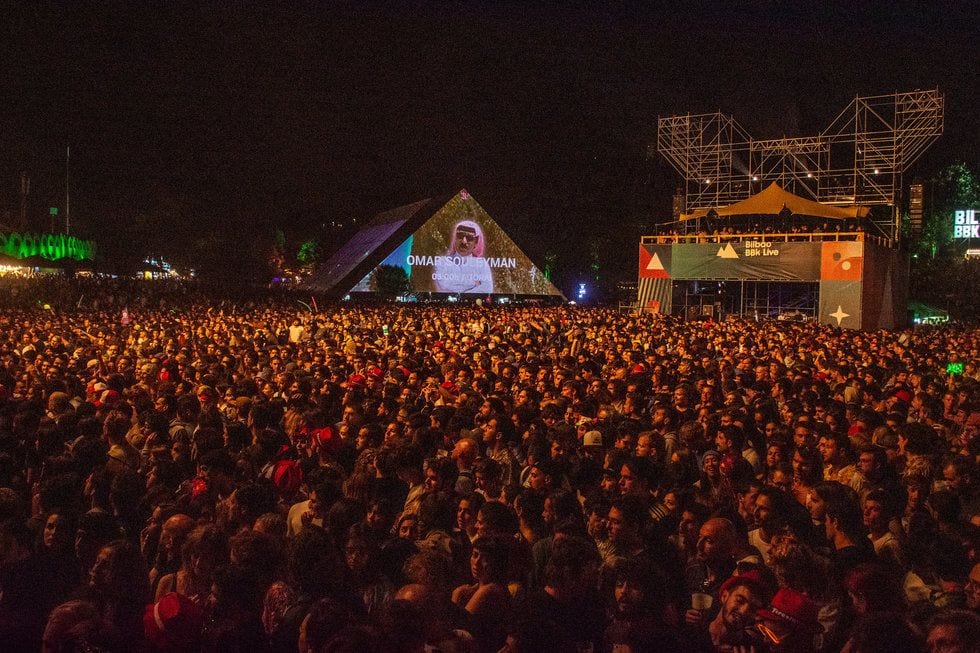 Right at the entrance, the difference from Day 1 was palpable; the large field was completely packed for one, even the hill opposite Nagusia stage had no room for sitting. The audience was, on average, much younger and much more intoxicated, albeit in truly great spirits throughout the night. This combination of youthful enthusiasm and sheer physical strength is what makes Iberian festivals so wonderfully appealing – the people over there are a grateful, supportive crowd, dancing and chanting to almost any performer, always contributing to a great atmosphere. At 11:00 pm, the moment the 25-year-old Catalan neo-flamenco sensation Rosalía appeared, hordes of young females shrieked with excitement. Gasping for breath, a colossal crowd shouted every verse back at the pink-cladded diva, whose first headlining performance at a (medium-to)large festival proved an indisputable triumph. 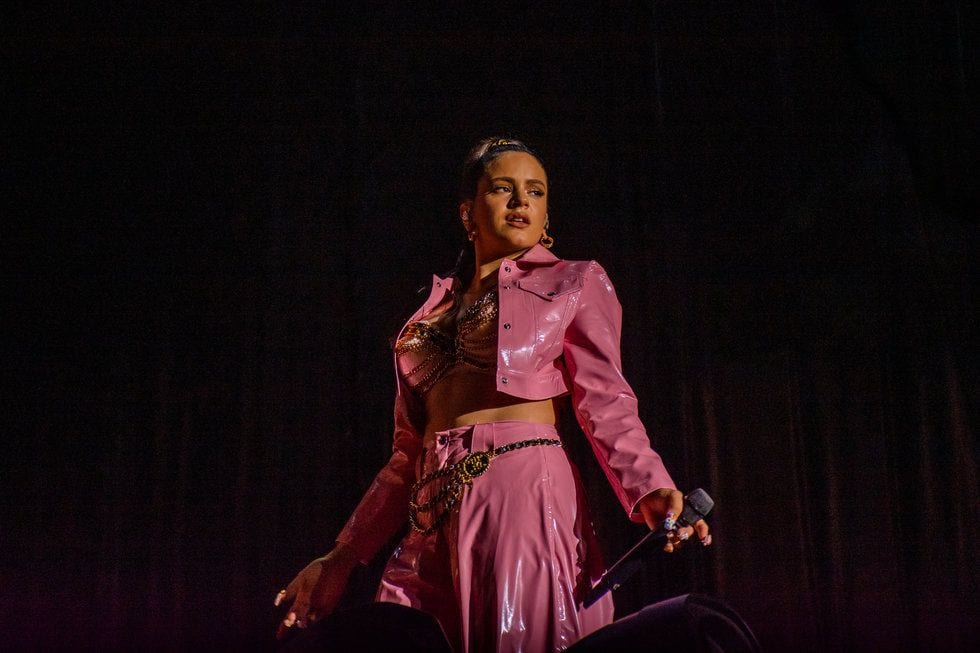 The mononymous singer-songwriter took Spain by storm with her inventive interpretations of flamenco, Spain’s national treasure. By mixing lush melismas and a strong a capella delivery with intoxicating R&B and trap rhythms, she has the potential to single-handedly bring her country’s musical legacy to younger generations planet-wide (her performance at this year’s Coachella was also very well-received). All the makings of a memorable headlining performance are there – a troupe of dancers to follow her every move, a large screen for complementary visuals, and a spotlight adequately shining on her alone as she dives into the more demanding vocal parts. With a set full of songs from her second release,
El Mal Querer (Bad Loving), flamenco, trap, reggaeton, R&B and much more mix in a continuous passionate dance; tears roll down many faces during the emotional “Catalina”, with her biggest hits, “Con Altura” and “Malamente”, culminating in spirited singing from the entire crowd. Curiously enough, just days ago, Rosalía’s show at Mad Cool Madrid was met with much criticism (“just a zumba class”, some had said), but here there is no room for negativity, as the show really did go incredibly well overall.

It is now past midnight and on the opposite main stage, a couple of thousand of more seasoned festival folk waits for Brett Anderson to slither in front of them in all his glory. An oddly high number of people wear t-shirts from various unrelated bands’ past European tours, including the Cure’s 2016 tour and Pearl Jam’s Binaural tour
from 2000. Kudos to that t-shirt’s endurance, it’s been nearly 20 years. Suede, however, sit at the intersection of all those legendary bands, with a career spanning 30 years. They have seen countless genres and trends come and go but are themselves enjoying a continuation of success, having entered the UK Top 5 with their 2018 release, The Blue Hour. 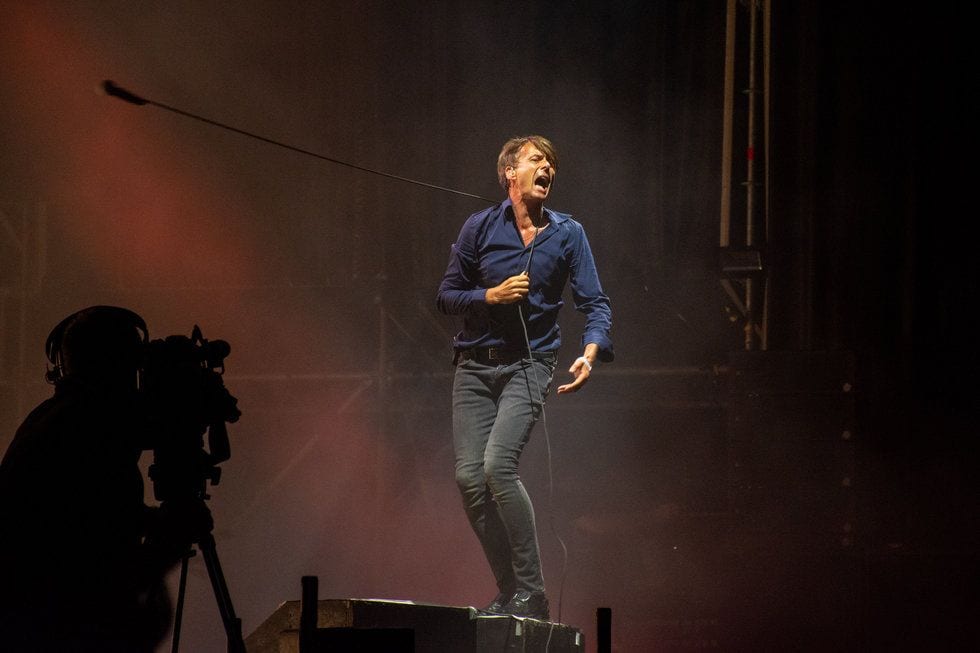 Onstage, unsurprisingly, Anderson is an uncannily handsome man, and this can be said of him with no moral qualms as he seems to be relishing the idea. In tight jeans and fitted shirt, he jumps, rolls around, screams on his knees and even wraps the entire microphone cord around himself – in the first five minutes of the show. It is a concert light in new material (only two songs off of The Blue Hour are featured, including the epic opener “As One”), but rich in the exploration of their entire back catalogue, and the crowd appreciates it greatly, singing to the majority of the tunes and indulging Anderson’s every whim. It is another successful rock concert that also likely introduced a legendary band to the young blood that swarmed in tens of thousands to the festival site that night.

Nevertheless, the real reason the day was sold out is hardly a secret, and what’s about to ensue can only be described as pandemonium. Virtually every person present tried to squeeze themselves past other equally fervent fans to get to the front of the stage for The Strokes. It’s already close to 2:00 am; The Doors blast from the speakers as the names of the five New Yorkers flash on the massive screen, blending into the iconic band name logo. The screams from teenage girls and middle-aged men alike are deafening. There is hardly any room to breathe, let alone stand within 50 yards of the stage. And then they appear, under cover of darkness. 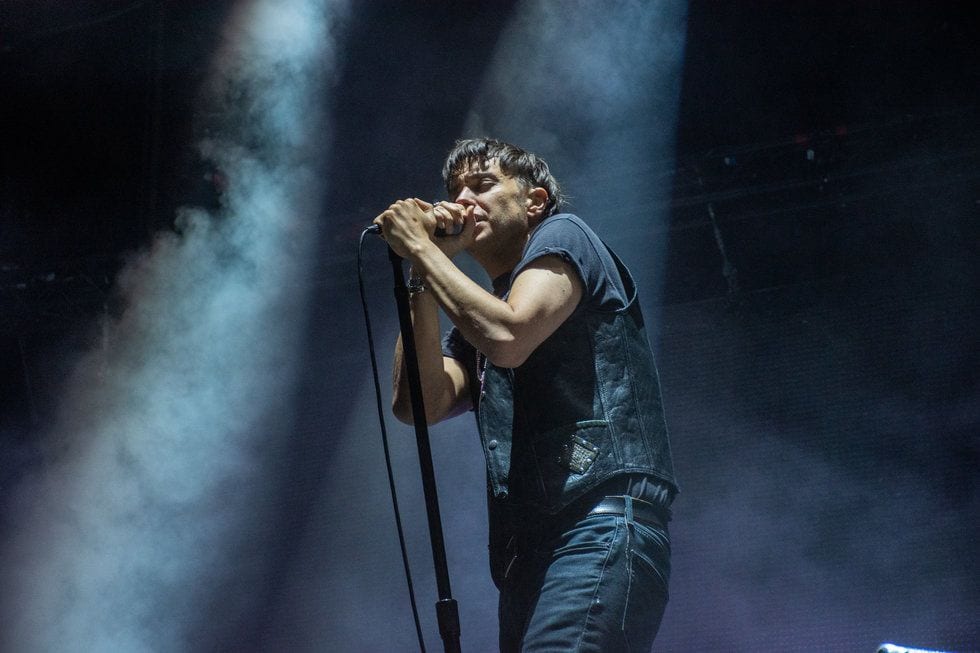 For someone whose middle name is Fernando, Julian Casablancas speaks very little Spanish. This, however, does not prevent him from the free-association rambling that continues throughout the show, cutting it a bit short as “Juicebox”, which did initially appear on the setlist, gets cut, most likely because of his incessant yammering. The band wisely opens with “Heart in a Cage”, instantly launching the mass into hysteria (there was a large moshpit?!?!). Those who know the lyrics scream on top of their lungs in already hoarse voices; those who don’t holler inarticulately, and if there has been doubt regarding whether The Strokes’ material stands the test of time and bears relevance to today’s younger generations, it’s obliterated in a minute. This band, which has effectively been on a decline since 2006 and has not produced a record in six years, is every bit as adored today as when they changed the global music scene with their postmodern cynicism way back in 2001.

One of the reasons for the barely describable mayhem may be that the Strokes seldom play in Spain and have not had an extensive world tour in years, but what matters the most are definitely their legendary hits, and the band knows this well. Out of the 18 songs performed, only four derive from their third album, First Impressions of Earth (none from their most recent releases), while the remaining 14 come from Is This Is and Room on Fire. 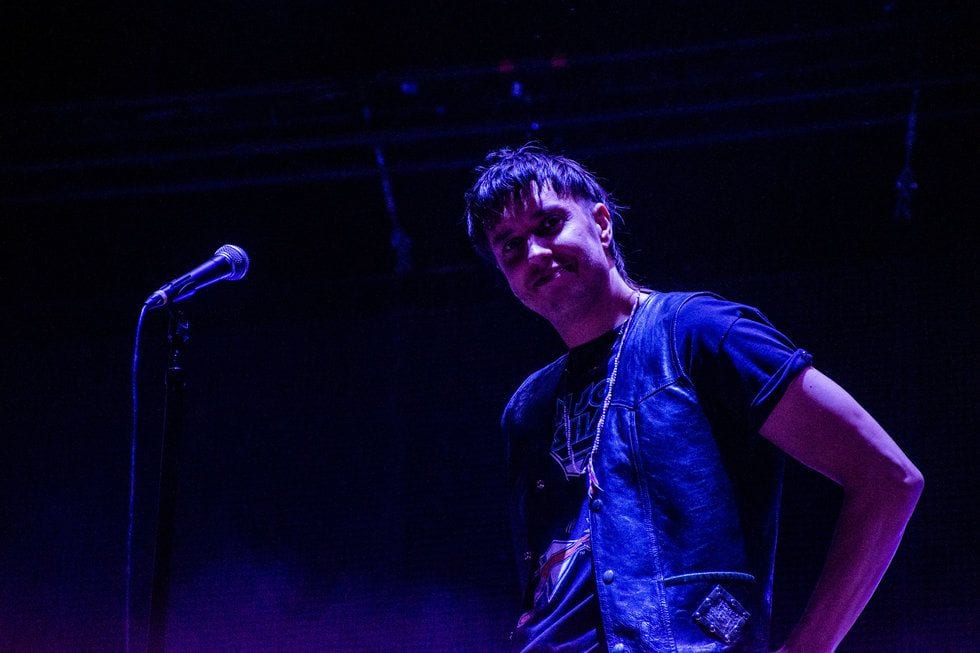 In many respects, these men, now mostly 40-plus years old, act as if they are the same people they were in 2001 – leopard prints, skinny jeans, sunglasses at night, poorly fitted suits, unkempt hair and the recognizable “can’t be bothered” cool attitude are all there. Casablancas still can’t sing but rather mumbles the verses into a tightly gripped microphone – he even still wears the same leather vest and hopelessly misses the rhythm to “Under Control” – just like the old times. All this still works, it works well, and not just because Casablancas is still endearing with his off-kilter statements like, “I’m an emotional whore!” or because he retains his youthful appearance.

No, it works because of the lack of purpose and a sense of perpetual emotional discontent featured in the Strokes’ most distinguished lyrics hit too close to home for today’s younger generations as well. Casablancas’ lyrical identity crises, which more often than not end up with him acting out without truly knowing the reasons why align with the postmodern interpretations of a (western) humanity detached from its existence and deliberately foregoing all introspection as a consequence of a general emotional and moral entropy.

And then there are the addictive hooks and riffs, and the band certainly plays much better and more coherently today than some nine to 15 years ago. “You Only Live Once”, “Heard to Explain”, and “Reptilia” send shockwaves through the crowd, who doesn’t stop chanting even when they are unsure of the words. This atmosphere of pure joy persists throughout the 90-minute concert, with many of the crowd collapsing to the ground or heading straight to get bottled water the moment “Last Nite” ends and the band bids a smiling goodbye. From this show alone, one could infer that there is a long-awaited the Strokes comeback that needs to happen, but another prerequisite for this is compelling new material. The band debuted a new song, “The Adults Are Talking” in May this year, but it was left out of the setlist here, and as of now there is no indication when a new album may come out. It also needs to be really good, too, for the band to return to their former glory. Somehow, they may still pull this off, and we’re rooting for them.

Around 3:00 am, the Syrian world-music-on-steroids wonder, Omar Souleyman, conquers the remaining crowds, but we are completely spent, and the journey to the hotel takes about 40 minutes (with the flawless festival logistics, again, kudos). The third day of the festival will feature Damon Albarn’s the Good the Bad & the Queen, Weezer, Vince Staples, and Hot Chip, and we will need our batteries full – both metaphorically and literally.