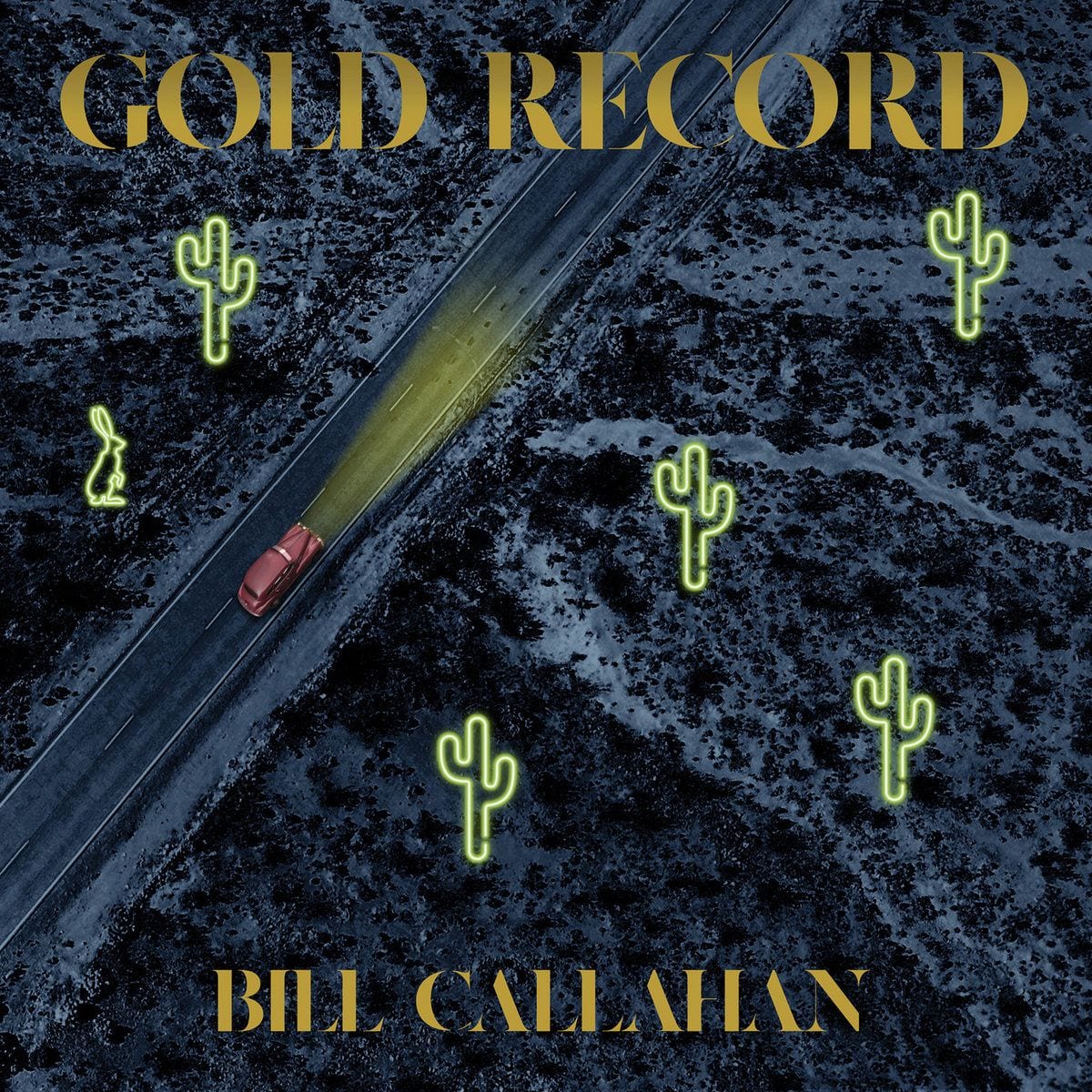 Whether or not you’ll like Bill Callahan‘s new record – his second in two years – depends, in good part, on your opinion of his voice. Callahan’s bassy growl always has tipped its hand at the timbre of late Leonard Cohen, but over the past few years, the tonal separation between that voice and the overly trebly, sometimes-feathery guitar figures around him has increased exponentially. When Callahan went by the stage name of Smog in the 1990s and early 2000s, it’s not that he sang in falsetto – far from it. His voice always has carried a burden, like the world’s weight is pressing down, Symphisian-style, hard on its shoulders. It’s one of the reasons his songs can be so affecting. But, Gold Record, out 4 September via Drag City, makes the distance between Callahan’s hangdog narration and the music that accompanies it all the more obvious and all the more a chasm – sadly, to its detriment. It’s one of the key detractions from what otherwise is a pretty engaging, if slight, collection.

Now, there are great songs on Gold Record, and Drag City has suggested it be ingested more as a series of singles, of snapshots of moments in time, of Raymond Carver-style short-clip portraiture. The opening “Pigeons”, with its tinny, high-pitched repetitions on acoustic guitar and affecting suggestions about being “married to the world”, could be cut right from the cloth of Red Apple Falls, no light praise. Callahan, who plays the sage-like role of limousine driver on the song, is wise to keep the accompaniment – horns, hints of pedal steel – in the distant background, suggesting more than a touch of lonesomeness. His finger-picked reinvention of “Let’s Move to the Country”, originally released on Smog’s Knock Knock, is beatific and delicate to a tee. Here, he unfurls a bit of vocal range – this time, to great effect.

Callahan also sounds, quite simply, like he’s having fun on the new material, and for songs this dense with sad-sack expectations, that’s a real good thing. This, after all, is the musician who once sang, “I am Star Wars today / I am no longer English grey” over a Rolling Stones loop. He starts “Pigeons” by offering, “Hello, I’m Johnny Cash”, seemingly without reason but, perhaps, with knowing glances about expectations of the Callahan canon. And the delightfully odd “Ry Cooder”, a jazzy shamble of a song, is redeemed for its silly lyricism and lack of self-consciousness about hero worship. The fact that the thing barely holds itself together during its 3:53 run time is beside the point.

“The Mackenzies”, at 5:04 the record’s longest track, is a filmy little piece, with well-timed accompaniment from backing guitarist Matt Kinsey, who offers all sorts of excellent narrative asides and punctuation marks. On “Another Song”, a decent little offering, Callahan’s capo is so high up his guitar’s neck, it sounds like he’s playing the ukulele. And, yeah, for the most part, it works. Elsewhere, even if only in spots, the thing falters. “Protest Song” goes to great lengths to extend its reach to the bluesy thorn of truthfulness but feels hammy, a little overcooked. “Cowboy”, with its on-the-prairie stage-setting, is too obvious a trope, and you can’t excuse the liberties Callahan takes with its structure. “35”, which can be interesting, kind of ambles.

However, the whole proceeding is redeemed a bit by its excellent closing track,” As I Wander”, where Callahan reflects on the restlessness of his youth. Fatherhood does that to you, it seems. Here, his voice is perfectly matched to fluttery measures on his acoustic and great little bits of flair from Kinsey’s backing guitar, a well-placed tambourine, and maybe – it’s tough to tell – a little ambience from a distant synthesizer.

The new record is pretty sparse in terms of its recording tones, very dry, and, in that respect, it owes a lot to skeleton-sparse Smog records like Kicking a Couple Around. But while that EP, another gem, seems to expand in its quiet moments, suggesting all sorts of dark narratives, heartbreak conceits, and hidden dialogues, the distance between Callahan’s voice and the material he surrounds it here will leave some broader declarations up for grabs. The listeners’ take ultimately will decide if this is a worthy addition to Callahan’s sizable catalogue or an indication that more reinvention is in order.