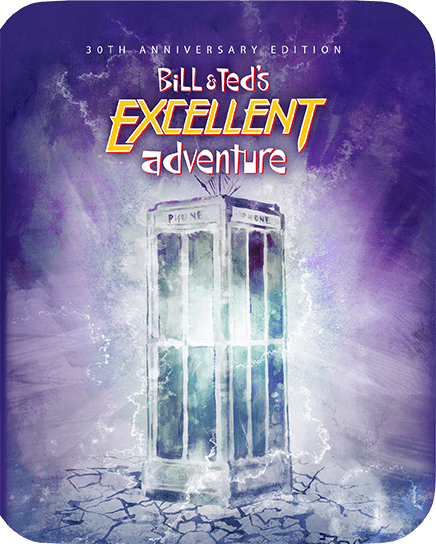 Other than the fancy metal case, it’s not altogether clear exactly why Shout! Factory felt the need to release this stand-alone “steelbook” only two years after releasing the similar but more robust Bill & Ted’s Most Excellent Collection box set. While the 30th anniversary of Bill S. Preston, Esquire and Ted “Theodore” Logan’s introduction to the world is certainly a momentous occasion that totally warrants commemoration, this “special” edition is all about repackaging with no new content to offer. Whereas the three-disc collection included both Excellent Adventure and Bogus Journey as well as four audio commentaries and two behind-the-scenes documentaries that had not previously been released, the special features on this one-disc Blu-ray simply lifts the relevant half of those bonuses and calls it good.

That said, the documentary looking back at the making of the iconic film is substantial, both in length and in content; it features interviews with almost every living member of the large ensemble cast, as well as observations from essential members of the crew, including writers Chris Matheson and Ed Solomon and producer Scott Kroopf. Insights into how the concept came into being (in a college improv class), evolved into the screenplay (ditching the time-traveling van in favor of a “less conspicuous” phone booth the wake of Back to the Future success), and navigated roadblock after roadblock just to be seen.

Despite the little hope they had the film would ever see the light of day, the cast and crew embraced the opportunities afforded to such an “underdog” and “homegrown” production; the general consensus is that the atmosphere on set was genuinely friendly, fun, and free-spirited — like “kids on a playground”. Director Stephen Herek seems to have struck a delicate balance in maintaining a structured yet relaxed environment, working with limited resources and production constraints without curbing the creativity of his performers. Indeed, the easygoing mood of the film is a direct reflection the natural on-set chemistry and improvisational banter between cast-mates, infusing the film with the personality we still know, love, and remember 30 years later. 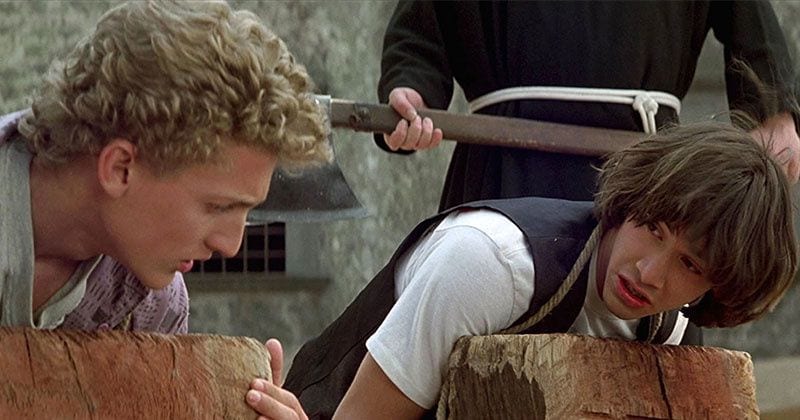 The off-camera relationships undoubtedly helped produce a most outstanding on-screen outcome, in no small part due to the quality casting. The motley crew assembled in this adventure through time is comprised of historical figures the writers simply thought would be most interesting and ridiculous to juxtapose, including Napoleon (Terry Camilleri), Billy the Kid (Dan Shor), Socrates (Tony Steedman), Freud (Rod Loomis, Genghis Khan (Al Leong), Joan of Arc (Jane Wiedlin), Lincoln, (Robert V. Barron), and Beethoven (Clifford Davis).

The members of this ensemble each maintain clear definition as the personages they are intended to portray while also avoiding becoming one-dimensional or hackneyed representations by giving them new quirks, flaws, and curiosities. Even brief asides, minor details, and actions in the background serve to flesh out these characters, especially as a response to their encounters with different eras throughout history. For example, Napoleon shows a particular affinity for ice cream, sunscreen, and water slides, paired with completely believable unsportsmanlike tendencies, while the Billy the Kid emerges as a fatherly, protective figure for the rest of the group, even teaching the almost childlike, timid Socrates (or So-Crates) how to play catch – with a nerf ball.

But of course, it just wouldn’t be quite as excellent an adventure if it weren’t for Bill (Alex Winter) and Ted (Keanu Reeves), and by all accounts, Winter and Reeves were just as much the dynamic duo on set as they were on screen. Writers Chris Matheson and Ed Solomon recalled spotting the pair out on the street before filming began without realizing who they were, and they remarked how the demeanor and interactions of the two perfectly fit what they had envisioned for their leads. Like Bill S. Preston, Esquire and Ted “Theodore” Logan, Winter and Reeves had an easygoing rapport and natural chemistry that led them to be almost inseparable, even spending their evenings jamming (poorly) on their bass guitars and venturing out to explore the desert together on their rare days off.

One of the most popular topics of discussion in the bonus features is, of course, the central characters of Bill and Ted, but more so their relationship than the individuals — who they are together rather than who they are apart. Despite insistent studio pressure to differentiate the two leads, the end result is a testament to the way the duo was originally conceived: as two halves of the same brain, completely content to be “endlessly entertained by each other”. The one small concession made to the studio was to assert that if they truly are to be two sides of the same persona, then Bill must be the “head”, while Ted is the “heart” — a distinction that is surprisingly apt given its post hoc formulation, and it consistently holds true throughout the trajectory of the narrative, whether by design or by fate.

Equally frequent are the loving homages to and fond recollections of the comedian and actor who almost didn’t get cast as Rufus, the somewhat enigmatic and uncommonly cool guide sent back in time to keep the “Great Ones” — and the future — on the right path. There was anxiety about who would play this pivotal if curiously hands-off mentor, and in hindsight, the relief felt when George Carlin signed on to the project (weeks into production) is now compounded by the indisputable perfection of his performance, combining dry humor, a calming presence, and straightforward wisdom. 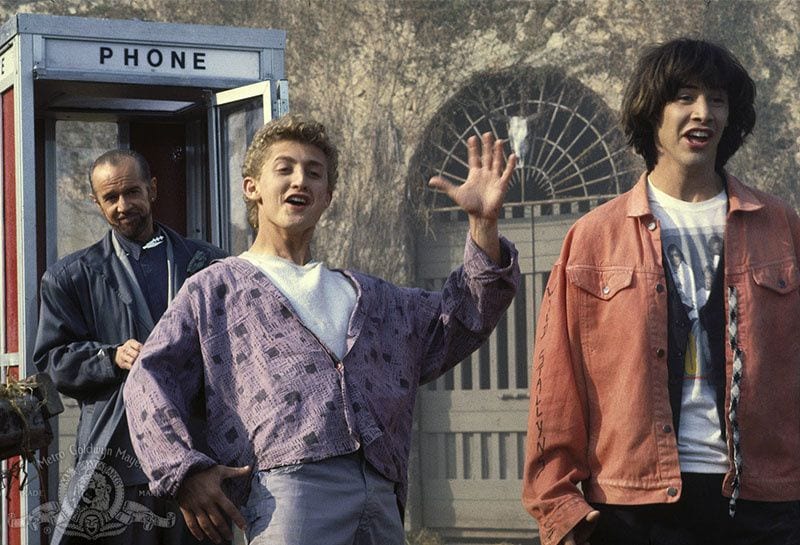 The language of Bill and Ted plays a pivotal role, a kind of central character itself in that it unifies these separate individuals into essentially one protagonist — just in two bodies. In fact, Bill & Ted-isms — whether coined or simply popularized by the duo — have infused our lexicon with such great depth and breadth that the characteristic dialogue of Excellent Adventure has held up impressively well, even after three decades. While the dialect would stand out as especially affected today, words like “stellar”, “righteous”, and “bodacious” are not only understandable but also not altogether unfamiliar in contemporary vernacular.

What’s even more striking about the unique linguistic style that is so pervasive and fundamental to the Bill & Ted brand is how it blends the underachieving high schoolers’ juvenile simplicity with a remarkable degree of sophistication. Paralleling their pursuit of education throughout the film, Bill and Ted ultimately become the teachers, both in their final history report but also for their viewers, especially introducing younger audiences to the thrill and power of a robust vocabulary, using such vivid words as “resplendent”, “egregious”, and “heinous” to enhance their singular style of self-expression. 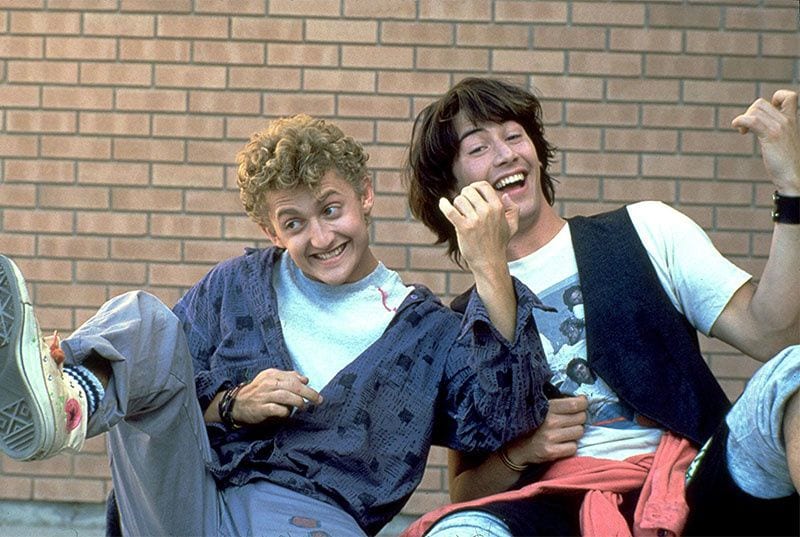 Even the pop culture references retain enduring relevance because they consistently draw from the things that boys with Bill and Ted’s interests would enjoy; it seems like such an obvious concept yet somehow still so rare to see, especially in such a timeless way. For example, after hiding inside actual suits of armor in a medieval English castle, the duo takes an almost too predictable but equally satisfying detour: an awkward light-saber duel, complete with vocalized sound effects, in which “Luke Bill” insists that “Darth Ted” is not his father.

Moreover, the minds behind the production made a conscious effort to infuse the film with the joy and love of music that so drives its two protagonists, both with references to popular artists that are so important to the fledgling band, Wyld Stallyns, as well as through the casting of the supporting characters. Joan of Arc, for example, is given a rather fresh, youthful depiction by Jane Wiedlin of the Go-Go’s, and the Three Supreme Beings of the Future (Clarence Clemons, Martha Davis, and Fee Waybill) each have prominent musical backgrounds in their own rights (E Street Band, The Motels, and The Tubes, respectively).

Bill & Ted’s Excellent Adventure approaches the unattainable: it is pure, optimistic, and family-friendly while also being downright funny to audiences of all ages, both consistently throughout the film and enduringly to today. The humor is anything but crude, sexual, or profane — despite some brief lapses that those involved have since spoken out about and the writers readily acknowledge, and which they mostly blame on their inexperience and ignorance as young writers. It is admittedly a very male-centric script that certainly would not pass the Bechdel test; their cursory and trite treatment of the “Princesses”. Joanna (Diane Franklin) and Elizabeth (Kimberley LaBelle) — names only given to them via the film’s end credits — is especially problematic, but they did not shy away from the issues in their audio commentary, vowing to redeem themselves if and when the long-rumored third installment comes to fruition.

Possibly the most durable legacy left by the “Great Ones” is their utterly hopeful and pure vision for the future, where Rufus assures “the air is clean, the water’s clean, even the dirt is clean; bowling scores are way up, mini-golf scores are way down, and we have more excellent water slides than any other planet we communicate with.” While they may not be “school smart”, these two high schoolers with dreams of rock stardom planted the seeds of this future utopia through a genuine quest to educate themselves about the world. While the catalyst may have been a more immediate adolescent threat — failing history class, getting sent to military school, and splitting up the band — Bill and Ted’s relentless enthusiasm, openness, and goodwill toward all they meet are infectious and, quite frankly, rather inspiring, even (or perhaps especially) in the face of the apathy, prejudice, and animosity that surrounds us today.

While Winter’s career shifted more behind-the-scenes and Reeves went on to primarily straight-faced action-adventure parts, even now, 30 years after the world first met Bill and Ted, there’s no denying that the combination of these two performers in these particular roles created something magical. Indeed, I would argue that Ted “Theodore” Logan may have been the best performance of Reeves’s career, engaging and relating to audiences with more emotional range and depth than many of his roles since. With the wave of recent announcements about Bill & Ted 3, confirming that Reeves and Winter are on-board, filming is scheduled to start early next year, and the writers are already hard at work on details of the script, at risk of jumping on the reboot bandwagon for the sake of just giving it a shot, if there is any chance that the magical spark of hope, curiosity, kindness, and good, simple fun can be revived, then I say, “Party On, Dudes!”