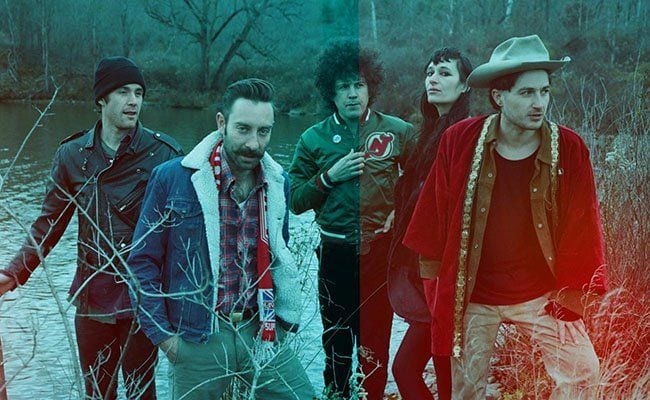 Harkening back to personal favorite and Black Lips classic Good Bad Not Evil from a sonic standpoint, the guitars are ablaze, and the grime comes in droves. Captured and produced by, none other than, Sean Lennon in his upstate New York compound/studio with no outside distractions to bait them and even his mother Yoko Ono chiming in on some backing vocals. The addition of new drummer Oakley Munson’s trap slapping and downright sax-y fills and interludes from Zumi Rosow are a bonus to the return of axeman Jack Hines. Thus locking in the five piece assault with chief songwriters and founding members, pukin’ guitar slinger Cole Alexander and bass man deluxe Jared Swilley.

For a band that’s played everywhere in the world (India, Egypt, Lebanon, Iraq, Jordan) and have been purveyors of our favorite grime infused, fuzzy trash rock, this may be the finest concoction yet — one that finds them in their true habitat like a mongoose on a snake farm. A jazzy cherub-like opening overture makes way for a galloping classic Black Lips build up on “Occidental Front” replete with hoots and hollers, screams and chants. A genuine dial turner as in volume up, please.

The haberdashery ensues as Alexander croons through a ‘60s-esque stomper in “Can’t Hold On” right into a Swilley sung gem of gleamingly scuzzy rock ’n’ roll in “The Last Cul de Sac” before moving into the record’s second interlude, another saxed-up number with loose drums, a jangly riff, and too much fun. Alexander then moves in with a gorgeous raunchy R&B ditty in “Crystal Night”, a personal highlight and one of the things the Black Lips do so well. Even the ‘Chipmunks’ back-up vocals are tight.

The truth is, we can go song for song all day on Satan’s Graffiti or God’s Art?, each song has a place and every place a song. The record plays out like a disjointed rock 101 course. The interludes, intro, and outro, are a welcoming disconnect, and isn’t that just what one looks for when delving deep into a Black Lips album? The boys (and gal) are deliciously disconnected here, at times weirder than the most spaced-out Captain Beefheart joint you’ve ever eared yet more rock ’n’ roll than Keef on a speedball. Not one iota of bullshit made its way to the final mix. I wonder if John Lennon heard “It Won’t Be Long” in the arrangement that the Lips mustered here in his head as he dreamt that number up?

Vice and the Black Lips, peanut butter and jelly for the disconnected. Run, don’t just walk to your local record dealer. Plenty folks talk about saving the genre, or lack thereof, these cats just do it. Rock ’n’ roll and all of its offshoots are safe and sound for now. Thanks y’all. ATL forever…