In 1983 I played an arcade game called Dragon’s Lair. In what was already a video-game cliché, a knight named Dirk the Daring attempted to rescue Princess Daphne. But the selling point was not the story—it was that it looked like a cartoon. Meanwhile, on my Atari back at home, the similarly-themed Adventure featured a protagonist who was literally just a dot. After losing a week’s worth of quarters within a minute, though, I realized that Dragon’s Lair was not really a game at all. It was a movie set to play prescribed scenes as the player merely tried to hit the right buttons in the right order, with no actual control over the character, only the initial appearance of it.

I thought of Dragon’s Lair trying to understand the interactive Black Mirror movie, Bandersnatch, which is, and is about, ’80s video games, and is, and is about, the Choose Your Own Adventure books that peaked around the same time. Set in 1984, a young, aspiring programmer, Stefan Butler, is working on a video game that presents the player with a series of dualistic choices, just as his own life is presented in exactly the same way to the real-life viewer. Yet like Dragon’s Lair, as the story goes on, it’s not clear how real our choices are. Unlike it, its format creates narrative and existential problems for the viewer-player: what does it mean to have choices in the first place? Based on those choices, what constitutes a good ending for this, or any, story, and why? Or, does Bandersnatch represent yet another entry into the growing catalogue of pop culture that is leading to the end of endings?

The premise of a Choose Your Own Adventure is, obviously, choice. The first choice for the viewer is what Stefan will eat for breakfast: Sugar Puffs or Frosties. From a game-playing perspective, this decision primes the viewer by starting simply, a way to practice interactivity. But, as the spate of memes demonstrates, the decision proves loaded and anxiety provoking: will this first choice, between two things that are in many ways the same (two sugary cereals, as opposed to Frosties and a banana, or leftover pizza, or skipping breakfast entirely), create a butterfly effect throughout? Can this first innocuous decision already have ruined Stefan’s life? As it turns out, the choice has little effect on the story, only affecting which commercial Stefan will later see on television.

This and subsequent choices, however, force the viewer into considering what makes a good choice in the first place, which leads to what counts as a good ending, and to what constitutes a good story overall. Another choice, only about 20 minutes in no matter how you play, asks us to decide whether Stefan will work with a software company or complete the game on his own. The answer seems obvious: work with the company. After all, isn’t that why he’s in the meeting? Isn’t this what he wants? But that choice quickly ends the movie, by jumping ahead to the completion of a mediocre, dissatisfying video game, much like the mediocre, dissatisfying story we are now a part of. If, as you’re prompted, rather than going to the end credits you go back to work on the game alone, the mediocre ending turns out, in retrospect, to have been the most salubrious one for Stefan. Unlike what will happen by working on the game on his own, Stefan doesn’t murder his father, direct a fellow programmer to jump off a balcony to his death, discover he was the victim of an abusive psychological study, get into a martial-arts fight with his therapist, or die. What is ostensibly the best ending for Stefan is the least satisfying for us.

Bandersnatch, like good fiction but bad real-life, depends on escalation and conflict. Any choice that eliminates conflict, from pouring tea on the computer that houses the game to committing suicide, leads to the end credits—or the chance to go back and make the other choice that will eventually destroy Stefan. In the end, we have only two choices: end the story, and Stefan’s misery, or prolong both. Like Dragon’s Lair the right move is the one that perpetuates the story; the wrong move is the one that ends it. And if the plan was to actually watch a movie, then we really have only one choice: to continue, even when, in fourth-wall breaking moments, Stefan tells us that he feels compelled by forces beyond his control to make choices, while we sit on our couches and make them for him anyway, like we’re participants in some gruesome Milgram-like psychology experiment. Back in 2001, the satirical website The Onion already understood the untenable moral decisions video games can inflict on players: “Video-Game Character Wondering Why Heartless God Always Chooses ‘Continue‘”: “Solid Snake, tactical-espionage expert and star of PlayStation’s ‘Metal Gear Solid,’ questioned the nature of the universe Monday when, moments after his 11th death in two hours, a cruel God forced him to ‘Continue’ his earthly toil and suffering.”

Late in one possibility of the story, in another meta-moment Stefan reveals how he finally was able to complete his game despite that its creation has driven him to murder and madness: “I’ve been trying to give the player too much choice. So I went back, stripped loads out. Now they’ve only got the illusion of free will. Really, I decide the ending.” By that point, however, viewers have already learned that the non-choice between Sugar Puffs or Frosties has escalated into much worse compulsory non-choices: Stefan must pull his earlobe or bite his nails, nervous tells either way—and Stefan, feeling controlled, does neither. If Stefan turns down Colin’s offer of LSD, Colin spikes Stefan’s tea with it anyway. Someone must go over the balcony. While they deliver different story outcomes, there’s little difference between burying and chopping up Stefan’s father. In an absurd apotheosis, the choice that leads to the mock action-movie fight between Stephan and his therapist is between “Yes” and “Fuck Yeah.”

Because of, then, rather than despite, its interactive format, Bandersnatch is an exercise in the illusion and futility of choice. Since the choices amount only to perpetuating versus ending the story, the effect is not viewer engagement, but something very different: viewer complicity. And this is, in fact, precisely what Netflix is purporting to engineer: in a New York Times article, according to Todd Yellin, Netflix’s vice president for product, “The idea behind the interactive push is simple: Viewers will care more if they are complicit.” In the end, we not only identify with Stefan; we become him, at first in imagining that we have choices, and then in finding ourselves compelled to do things we would or should not do. Placing the story in 1984 becomes a giant George Orwell flag, but not because of the plot point that Stefan may be watched or controlled. Is Big Brother watching him? Someone certainly is. We are.

But we are not Big Brother. While we think we’re watching Netflix, Netflix is watching us. That throwaway choice that doesn’t affect the story, about Sugar Puffs or Frosties? That’s the one choice that, by extension, Netflix really cares about the most. The seemingly benign way in which the Frosties follow us from our remote control to our screen, in the guise of Stefan’s TV, just as the shirt we Google will haunt us in ads forever, becomes the main point. As the New York Times article continues, it always comes back to the data:

Interactive filmmakers will take your preferences … and convert them into numbers that will guide the creation of new shows you will be programmed to find irresistible.

“We’ll see what resonates with audiences and what doesn’t,” Yellin said. 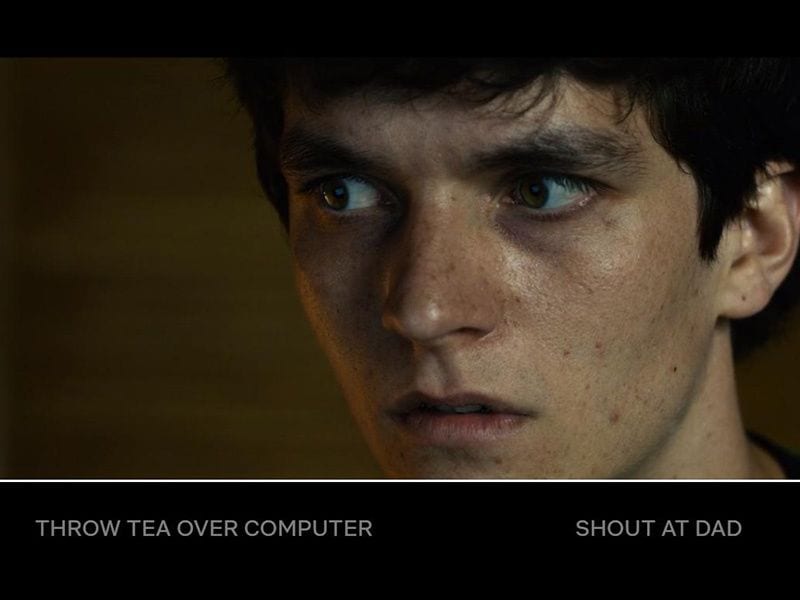 Like video games and Choose Your Own Adventure books, the interactive format of Bandersnatch is supposed to allow viewers the chance to control the story, unlike the purportedly passive nature of conventional film and television. But because this is Black Mirror, the story is self-referential and self-aware—and before long, so is its protagonist, who wails, “I’m not in control!” The game Stefan is developing is called Bandersnatch, based on a fictional Choose Your Own Adventure novel by a fictionalized version of Philip K. Dick called Bandersnatch, based on the creature from the poem “Jabberwocky”, which Alice finds in Through the Looking-Glass, the sequel to Alice’s Adventures in Wonderland. While “down the rabbit hole” now suggests getting “extremely and obsessively involved in something to the exclusion of normal friends and family”, which is what happens to Stefan and, ostensibly, the viewer, Bandersnatch‘s title reminds us where the phrase came from; Stefan’s initial trauma stems from his attempt to follow a (stuffed) rabbit; and Through the Looking-Glass was always about the power of (black?) mirrors to direct reflected worlds. If viewers get far enough, they discover that, in the future—or is it the present?—Colin’s daughter Pearl has grown up to create the interactive episode we are now watching, based on the game, based on the book, based on the poem… If the movie is an imaginary creature, it is not a Bandersnatch. It’s an ouroboros.

Alice figures out that, because she is in a mirror world, the writing of the poem is inverted, so she can only read it by holding it up to a mirror. In the inverted, opposite world of Black Mirror, the movie Netflix hoped would initiate an age of interactive television becomes a warning against interactive television. Bandersnatch, in true Black Mirror fashion, fails as a film precisely because it succeeds as argument against interactive stories; it’s already a late-stage deconstruction of the genre it was supposed to usher in. But that was already clear from the title. As the poem tells us,

Beware the Jabberwock, my son!
The jaws that bite, the claws that catch!
Beware the Jubjub bird, and shun
The frumious Bandersnatch!

Great stories, from Alice in Wonderland to Hamlet, the work of James Joyce or Toni Morrison, Luigi Pirandello’s Six Characters in Search of an Author, which Bandersnatch resembles, has always been, at least in part, about itself, and has always been interactive. It didn’t require a remote control. It required imagination, first from the author, and then, just as importantly, from the reader. Netflix executives to the contrary, art is not passive. It’s why Adventure, despite the dot, was a great game, and “Dragon’s Lair”, despite the slick aesthetic, was not.

Black Mirror creator Charlie Brooker concludes the New York Times article by warning anyone who wants to create more interactive stories to “run away. It’s harder than you think.” He’s also talking to us. If we want to live in a world that is uneven, unsettling, gives a barrage of unsatisfying choices, and we never knew when it is going to end, we can just stick with real life, thanks. The possibilities of fiction—coherence, character, connection, closure, and empathy over complicity—are different, and maybe better.