How long can a show like Black Mirror, which has already lived several lives in the UK and America, both as a cult property and as a wildly popular one, stay relevant? Certainly not much longer, by the looks of it, though creator Charlie Brooker and his cavalcade of talent would like you to think otherwise. The show, depending on how he decides to end it, will likely go down as one of the 2010s’ most important programs; it, not the ill-advised Twilight Zone reboot released earlier this year, was the true heir to Rod Serling’s throne of existential horror, and it wielded that influence expertly for at least its first two seasons. Black Mirror used to be fresh, back in 2011 when it premiered, as it brilliantly applied popular dystopian elements to an eerily realistic future of harrowing techno-horror.

The three episodes in season 5 (it’s the show’s shortest season since it came to Netflix in 2015) don’t live up to this legacy so much as they half-heartedly extend it. Although the familiar elements of alienation and desperation are here, the show itself seems to have lost its footing amongst heavy — if not roundly well-executed — competition. Numerous shows, not just the Jordan Peele-hosted Twilight Zone, have swooped in to grab a piece of what Black Mirror started. But in its latest iteration — in the first swath of episodes since the gimmicky interactive film Bandersnatch — Brooker’s show is hardly better than its many imitators. One could argue that, although seasons 3 and 4 (the first two after the move to Netflix) both had excellent episodes within the mix, a dip in quality had been enacted as soon as the show left Channel 4. With season 5, such a nosedive is no longer a matter of debate.

The latest season begins with “Striking Vipers”, which stars Anthony Mackie as Danny, a bored married man who misses the passion of new romance. His wife Theo (Nicole Beharie) craves spontaneity too, urging him to participate in bouts of roleplay, but it only temporarily rekindles their spark. At a barbecue one day, he reunites with his friend Karl, (Yahya Abdul-Mateen II), a bachelor who introduces him to a new virtual reality game called Striking Vipers. In the game, all sensations are replicated and Danny and Karl assume the physical bodies of their fighters, Lance and Roxette (Ludi Lin and Pom Klementieff). They begin fighting, and after a moment, they start kissing. An affair has begun, though one with complicated ethical bounds. 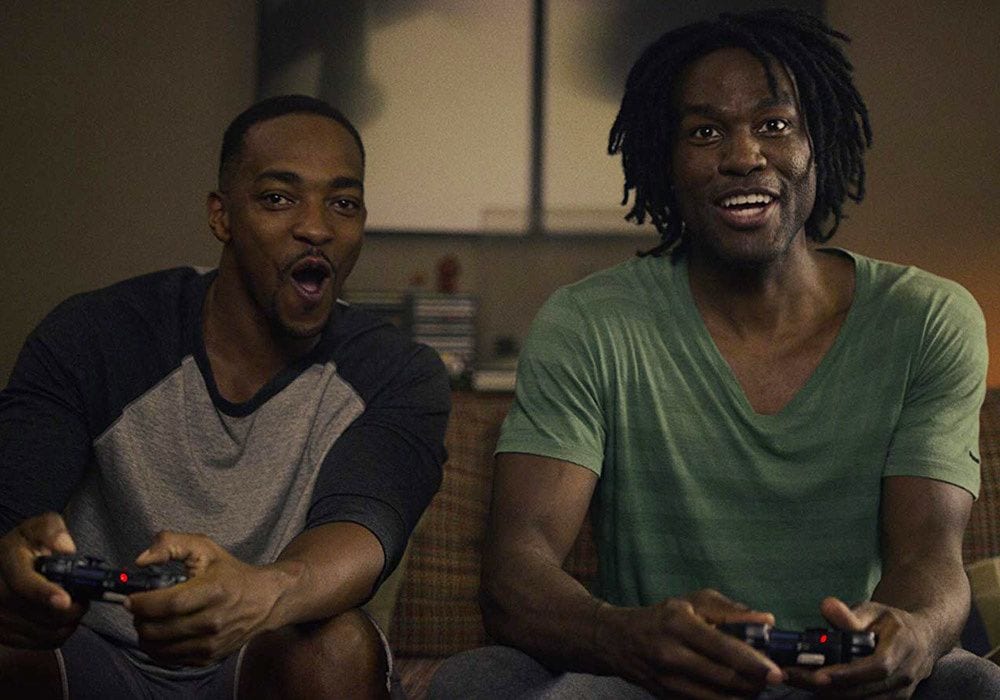 Inexplicably, the sex Danny and Karl have in the game approaches a new frontier of passion, as if the dubious inner workings of the game set off some sort of escape that isn’t achievable to either man in the real world. Danny grows distant in the real world, and eventually Theo confronts him. He puts an end to the tryst, but knows that a real confrontation with Karl is on the horizon.

It’s an interesting concept that brings us issues of sexuality, consent, and fidelity, and yet, in the end, it amounts to little more than a traditional affair narrative dressed up in high-tech clothing. Several obvious questions — What motivated them to start kissing in the first place? If Danny plays a man in the game, why isn’t Karl more overtly confused about his sexuality? Why does virtual sex feel better than real-world sex? — are hardly explored, and unfortunately, Theo, the audience proxy, amounts to little more than the angel on Danny’s shoulder telling him to do the right thing.

Danny and Karl do finally act on a potential real-world romance between them, and yet the episode almost entirely elides the inherent drama of a straight man considering his own queerness for the first time. “Striking Vipers” is, accordingly, unsatisfying, and doesn’t manage to clear the high bar it sets for itself.

This swing-and-a-miss approach continues into the next two episodes, sadly. In “Smithereens”, a suicidal rideshare driver named Chris (Andrew Scott) hijacks an intern (Damson Idris) from the London office of an international social media company. He drives the intern into the countryside before being apprehended by the police, who chase him into an empty field. By brandishing his gun, he staves off the cops for long enough for the social media company itself, called Smithereens, to get in touch. They urge him to give in, but he refuses to budge on his terms until he speaks with the CEO, Billy Bauer (Topher Grace), who is on a ten-day silent retreat in Utah. 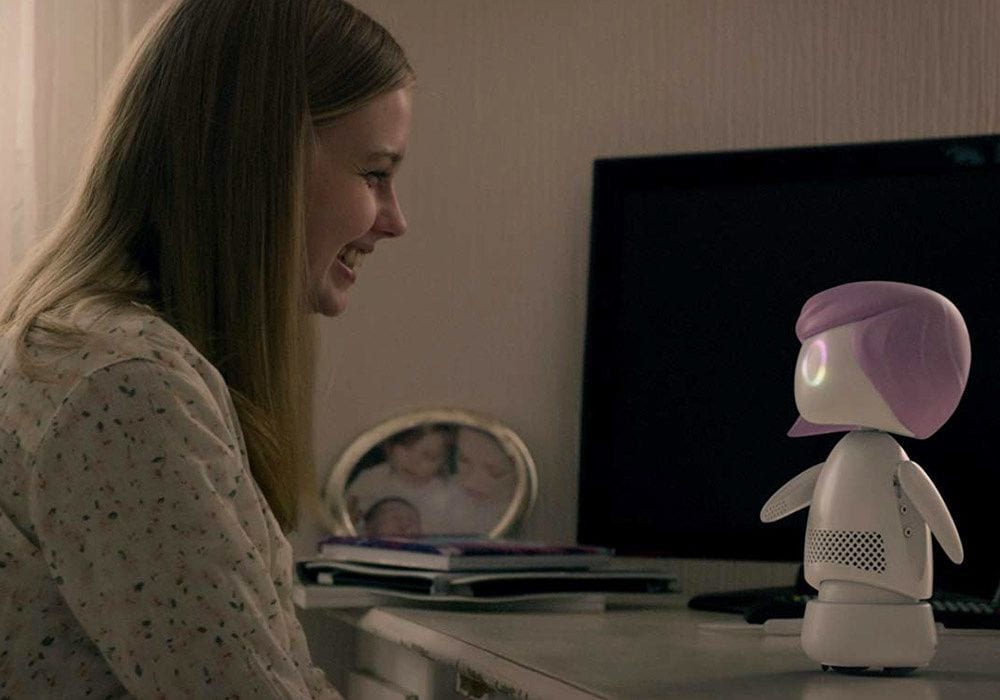 In the third episode, “Rachel, Jack and Ashley Too”, a teenage girl named Rachel (Angourie Rice) cultivates an obsession with the pop star Ashley O (Miley Cyrus) to deal with the alienation of being the new kid in school (her sister Jack, played by Madison Davenport, chooses instead to dye her hair black and listen to rock music). But on the other side of the glass, Ashley O is similarly desperate for an escape, in her case from her overbearing aunt and manager, Catherine (Susan Pourfar), who controls every aspect of her music and public persona.

Rachel is ecstatic when she sees an advertisement for a new doll called Ashley Too, which consolidates Ashley O’s real personality into a cute, Furby-like droid with a pink wig. Her clueless dad buys her one, and she soon spends all of her time with the doll, which convinces her to believe in herself and perform at the school talent show. Meanwhile, Catherine drugs Ashley O after reading her diary and sends her into a coma, further tightening her grip on the pop star’s career.

Both episodes, though wildly different, fail most prominently because they refuse to draw unique, memorable characters. It’s almost unnecessary to trot out their names — Chris, Rachel, Jack — given how quickly they recede from memory once the episodes are complete. This is not the fault of the actors; Scott, most famous for playing the flamboyant villain Moriarty in BBC’sSherlock, gives his all to making Chris both unhinged and sympathetic, but his story is too trite to really leave a mark. Grace, who starred in That ’70s Show for years, is expertly cast and provides glimpses of the hilarious Jack Dorsey parody Bauer could have been, but isn’t given enough screen time to resonate. Rice, Davenport, and Cyrus — two promising young talents and one of the world’s biggest stars — are likewise too talented for the middling roles they’ve been subjected to here.

If Brooker decides that there’s enough ammunition for a season 6, the legacy of Black Mirror will certainly suffer. It makes perfect sense that 2019 — the last year of the decade — should also be the last year for one of the 2010s’ best shows. To continue would be a disservice to viewers who have stuck with the show since the beginning. But Brooker, who has written every single episode of the show, is certainly not done, or “canceled”, if he chooses not to be. It’s a television tale as old as time, really: Choose the easy route and make more money, or risk failure by creating something genuinely new for the 2020s?