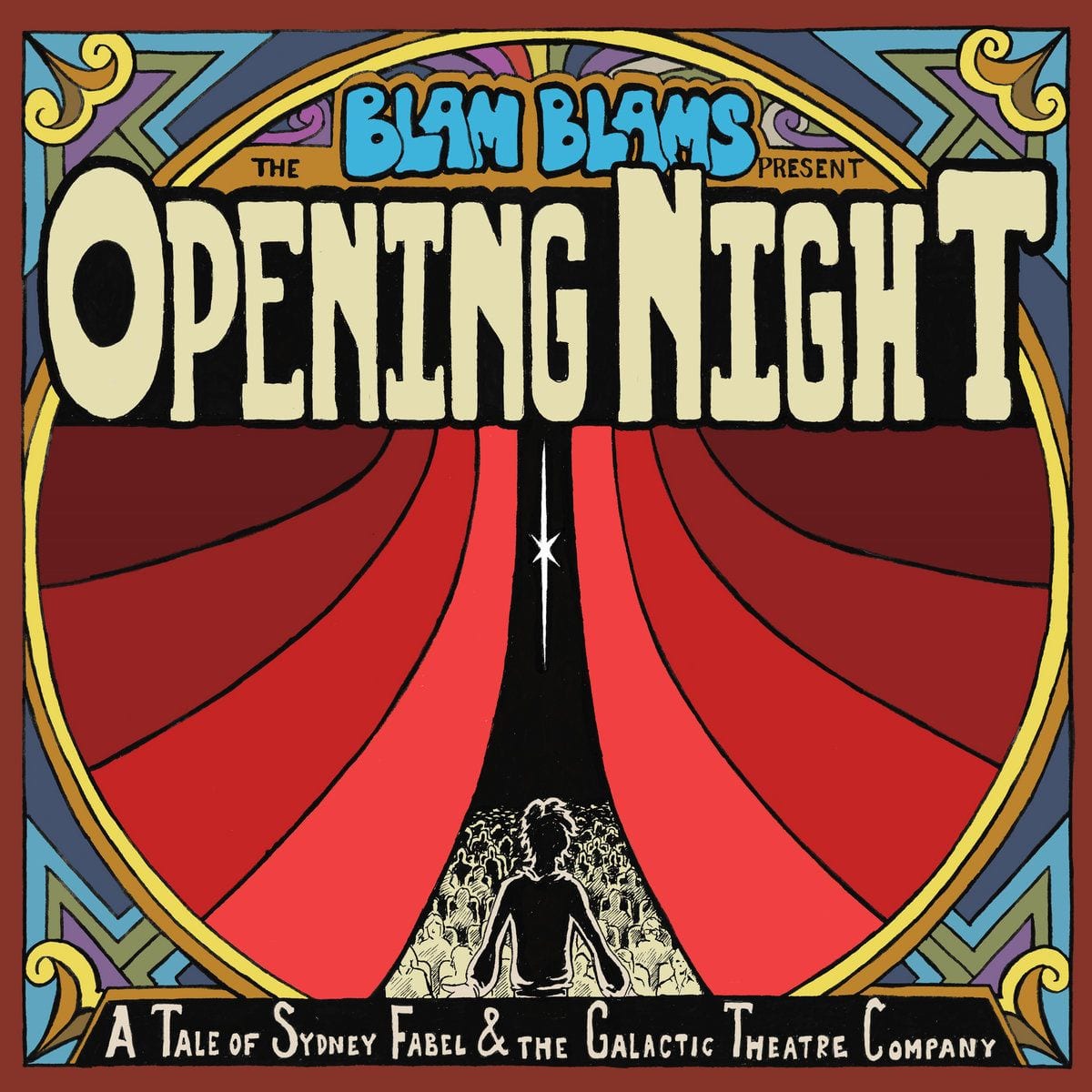 It’s one thing to wear your influences on your sleeve. The Blam Blams, a quartet out of Nashville, have gone so far as to raid a glam rock closet from the mid-1970s and are trying on every outfit. But this isn’t a band that use a bygone era as some fashionable crutch – they marry their love of classic songcraft, angelic harmonies, and arena-sized riffs with meticulous skill and dedication. Opening Night, their debut album, is both a love letter to another era and an engaging collection of instantly lovable songs.

As with many of the albums that have influenced the Blam Blams’ sound, Opening Night is a concept album. It explores the life of Sydney Fabel, a queer actor and artist in 1970s London, as he steps onto the stage for the first time in his life both literally and figuratively. Consequently, themes of self-expression, anxiety, and sexuality are explored. Musically, the most obvious influence here is Queen. There are moments on Opening Night when the listener might swear that they were hearing a deep cut from A Night at the Opera or A Day at the Races. But again, this isn’t a lazy exercise in derivative mimicry. The songs are strong, and the album is expertly paced – the title track kicks things off with vocalist and keyboardist Bradley Owens setting the stage: “The lights are going up,” he croons over the gentle piano as the band simmers behind him. “The crowd is filing in to see the show / My life is on display, in a way / I feel I’ve been backstage so many lonely days.”

“Overture” follows suit with more stage-setting as the sweeping, piano-centric musical themes give way to full-band stomping, complete with David Estes’ squealing, multi-tracked guitar leads and vintage organ. Opening Night contains plenty of theatrical moments, but – perhaps more than anything else – it rocks heavily. “Blue Light” includes some of the album’s most propulsive, rocking moments with Marc Bolan-esque riffs and a chugging rhythm section courtesy of bassist Rob Stewart and drummer Christian Northover (the latter a one-time member of Car Seat Headrest). Those breathless, up-tempo moments are nicely tempered with Owens bringing the band back down to the ground long enough for some theatrical spoken word. “Welcome to the Theater Fantabulosa, here in the heart of the West End,” he intones dramatically as Fabel and the Galactic Theater Company perform their first show.

But along with all the fussy-yet-fun complexity that comes along with a retro-leaning concept album, Opening Night includes a generous helping of gleaming pop moments that work perfectly well on their own without any backstory. The wonderfully engaging single “Isabella” bops along on a catchy shuffle beat with those ever-present harmonies and Owens’ electric piano providing a delightfully funky foundation. Fabel’s story fits in perfectly here, as the song describes his relationship with his girlfriend that’s more about her clothes than anything else: “Isabella, my love,” Owens croons. “I sing your name in the morning time/ Thought of giving you up / But a woman with your wardrobe is hard to find.”

Other songs on the album that were previously released as singles include the slinky, swaggering “Throwaway Lines” and the fist-pumping “Arc Light City”. The latter brings Estes’ chugging riffs to the foreground (with piano and synth relegated to a low-key backdrop), creating something of a readymade arena anthem. Elsewhere, Opening Night plenty of non-glam influences: the breakneck pace of “He Said” has a bit of a punk/power-pop flavor, and “You Got the Drop on Me”, with its cheesy Vox Continental organ, recalls the melodic conciseness of 1960s garage rock.

But the pomp and circumstance of Opening Night come full circle with the album’s elaborate closing track. “The Show’s Over” ends things appropriately with the knitting together of several mini-sections, from piano-led balladry to Estes’ majestic Brian May-isms to the full band stomping away as if their life depended on it. It’s a lovably over-the-top conclusion to an album full of hooks, riffs, earworms, and ambitious, lofty ideas. Somewhere, Freddie Mercury is looking down and smiling.