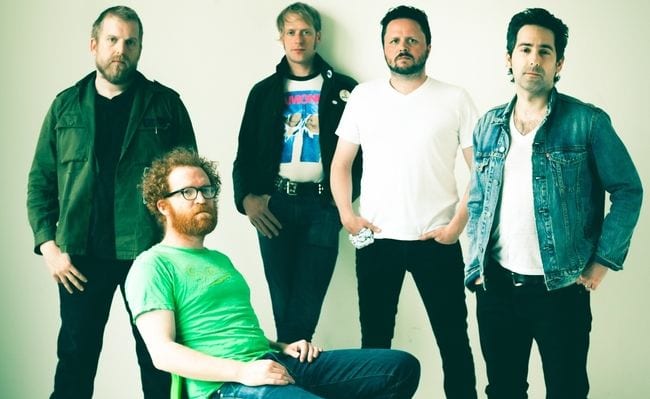 Blitzen Trapper
All Across This Land
Vagrant

“I fell asleep,” says Blitzen Trapper’s Eric Earley, speaking on a crackly phone line from somewhere in the middle of America as his band winds its way to a show in Chicago. The hours are barely in the double digits at this point in the day and our initial attempts to connect are thwarted by the frontman’s short-lived slumber.

At the time we speak Blitzen Trapper is, appropriately enough, taking to the road support All Across This Land, a record that may very well be the Portland, Oregon-based outfit’s best to date. It’s also a return to the group’s more Americana-driven tendencies, not entirely dissimilar to 2011’s American Goldwing.

Gearing up for this new record’s release, Earley was keen to point out that the band hadn’t lost touch with its experimental notions. VII, the band’s 2013 LP, saw Earley proclaiming influences as diverse as Waylon Jennings and Wu Tang Clan and that came across on an album that stands as the group’s most danceable to date, one that some saw as a “futuristic” blend of country and hip-hop. Rather than point out the disparity between those sounds, Earley seamlessly blended the two so that listeners were reminded, such as on “Oregon Geography”, that the distance between Bob Dylan’s Hibbing and Andre Young’s Compton maybe aren’t always that far.

The group’s 2003 self-titled release was delightfully off-center as well, sometimes recalling Pavement or Guided By Voices but classic British pop and prog sensibilities that if present in the works of those acts are often muted. The following year’s Field Rexx probably stretched out further into the acid-drenched Western landscape than its predecessor and was all the better for it. “Dreamers and Giants” was a gorgeous, almost psychedelic number while “Dirty Pearls” and “Love I Exclaim!” are almost without precedent. What was clear by that point remains clear today: Blitzen Trapper has never really cared about meeting expectations.

“I never really had much ambition toward anything in my life,” Earley says. “We’ve continued with that lack of ambition or forethought when it comes to making records. We make records and do whatever we feel like. It’s probably been pretty detrimental to us as a band. But that’s just kind of how we’ve always operated.”

The group’s strange tendencies were rewarded in 2007 with the emergence of Wild Mountain, a record that crystalized the promise of its predecessors and promised a bright future of the collective. The band had its head down and Earley in particular was pretty deep into Furr when Wild Mountain came out.

Sub Pop swooped in and signed the band and from there the group gained notoriety and praise from the critical corners of the internet. The album was novel and emotionally complex in a way that many others were not. There were indications that despite a lack of ambition Blitzen Trapper was a band that was built to last. The almighty buzz came to a head with 2008’s Furr, which featured some of the band’s most Beatles-y/Big Star-y moments.

That record also featured one of Earley’s most perfect songs. “”I think you could say that Furr has outweighed every other song for whatever reason,” he says. If there were predictions that the band was going to break through from the underground, it didn’t exactly happen, despite some momentarily increased audibility. “We’ve never really had any records that were successful other than that one,” Earley says, “and that was only marginally successful.” Then he adds, with typical understatement, “I guess we haven’t ever tried to make some big giant consistent record.”

But the group has made records that have been deeply loved, including the aforementioned VII and American Goldwing and 2010’s Destroyer of the Void. That record and Goldwing are notable for their Americana tinges, as surely as is All Across This Land. But the path between some Earley’s influences and his own songwriting is well shrouded.

His affinity for The Replacements, for one, might come as something of a surprise. But Earley is quick to point out that there are moments in the Replacements’ catalog that are not that far removed from country. “The last two Replacements records with slide guitar and harmonicas, those sort of Americana tropes, were really interesting,” he says. “In high school I was just listening to a lot of the early alt country that was starting to happen. Jay Farrar, Jeff Tweedy, Pavement, all that stuff stems directly from Paul Westerberg.”

This new recording opens with the attitudinal title cut, a hip shaker of a number that calls to mind the crosscut saw guitar lines of classic Faces; at times the piano lines conjure images of, say, The Band or other, soulful rockers that, like Blitzen Trapper, offer a confluence of sub rock idioms. But Earley claims that he was never one to go retro and then go native.

“I didn’t get into older bands until after college,” he offers, explaining that by the time he heard music older than The Replacements and others his formative influences were pretty solidly in place. “And I never really listened to The Band that much.”

What has made Earley’s songs great all these years has been their stylistic and emotional range and the same may be said of All Across This Land. There are songs of heartbreak and commitment (“Don’t Let Your Love Grow Cold”, “Lonesome Angel”, and “Even If You Don’t”) that are in no shorter supply than the easy rockers. At times one is tempted to see this as a record about growing older. Maturing.

“Listeners seem to find a lot of similarities between the songs,” he says. “There could be some of that but I didn’t do that consciously.”

One area that he says he was fairly conscious of was the production. There’s an autumnal chill that presides over the album, touches are sometimes disquieting, other times heart-breaking, other times utterly haunting. But, like so much of everything on this new record, it’s perfectly placed.

“I was pretty deliberate with that stuff in the production,” he says. “I didn’t do a lot of extra stuff but what I did do I definitely wanted it to mean something.”

As the our conversation winds down, Earley adds that the new material seems to be connecting with hardcore fans in the live setting, adding that the band tries to draw from as much of the catalog as possible for gigs.

Asked if it seems like that’s led some people to the earlier, stranger records he says, with his almost trademark mystique, “I don’t know. I hope so.”

And maybe, with Blitzen Trapper, not knowing is the best part of all.