“Don’t be afraid,” an artist tells a model. “We just want to look.”

That fragment of dialogue comes late in Mitchum, but if the graphic collection has a theme, that’s it. Though the various characters are narratively unrelated, Blutch’s pages keep repeating scenes of artists looking at models as they sketch them. The artists of course are male and clothed, and the models female and unclothed. And because it’s a page in a book, “we” also includes us, the viewers—whatever our various states of dress and genitalia.

The artist-looking-at-model ur-scene serves as a splash page for chapter one, introducing the book’s most defining motif. The depicted artists include the author, Blutch (penname of French comics artist Christian Hincker), who makes a dream-like cameo in the collection’s longest and most surreal sequence — Jimmy Stewart later emerges from inside a police detective’s trench coat to molest a sleeping woman before he’s kicked aside by the detective’s female partner. While apparently relishing the voyeuristic view, Blutch seems self-critical too, since some of these women have good reason to be afraid. The native woman bathing in a stream unaware of the Puritan husband ogling her from the trees is an example from the first chapter’s first scene.

And yet the images themselves—black ink portraits rendered in lines that waver from precisely thin to boldly splotchy—are vibrant testimonies of Blutch’s artistic energy. Mitchum is thrilling to flip through. Though the images are technically cartoons, the style is idiosyncratic, sometimes warping into full abstraction—as when a dance hall scene devolves into thick wavery lines. If the style of the figures seems vaguely familiar, it’s probably because Craig Thompson imitated it so effectively in his 2003 Blankets.

Though I consider myself reasonably well-versed in comics history, I’m a newcomer to Blutch’s work and so I’m especially grateful to New York Review of Books for this first-time-in-English edition of the author’s collected five-part series from the 1990s. I tend to think of the ’90s as an unfortunate decade in comics, but that’s due to the superheroic norms of Marvel and DC and independent spin-off, Image. But Blutch (along of course with Neil Gaiman, Dave McKean, the Hernandez brothers, Seth, Joe Sacco, Daniel Clowes, and others) was producing exceptional work outside the US mainstream. Whatever his reputation when first publishing in the ’90s, Blutch has also achieved literary acclaim, as evidenced by the recent inclusion of the eight-page sequence “I Want You” in the Paris Review.

Though no excerpt is narratively representative, “We just want to look” comes close enough. Like the entire first chapter, the segment is wordless. A male protagonist grows infatuated by a female stranger on the street and eventually works up the nerve to approach her. The two seem to hit it off and are soon at his apartment where he shows her his drawings (yes, of course he’s an artist), and next they’re at her more expensive apartment, where she is wearing increasingly fewer clothes as he draws and draws and draws.

Then the wordless punchline: her husband arrives home, receives a kiss from his wife, and admires the artwork, giving the artist a literal thumbs up. The artist then returns to his home and receives a kiss from his girlfriend lounging topless on the couch. The joke is on the viewer, whom Blutch duped into misperceiving the situation. What looked like a sexual attraction was just an artistic transaction: the artist wanted to draw the woman, and the woman wanted to be drawn.

Mitchum was originally a loosely defined series with no repeating characters (while most are human, the fifth chapter features anthropomorphic bears), ranging from 30- to 70 black and white pages. Even the title provides little or no hook. I assume it’s referring to the actor Robert Mitchum (who makes an extended appearance in thr dream-like third chapter) and not the deodorant of the same name. Mitchum can also mean ejaculate, presumably a further reference to the actor and his famed manliness.

Other sections include dialogue and brief narration, translated by Matt Madden (whose 99 Ways to Tell a Story I also recommend), and impressively lettered by Dean Sudarsky in a style that merges with Blutch’s art, an effect further emphasized by Blutch’s open style of talk balloons. His panels tend toward open too, creating a frameless visual flow that seems to move with the inky splashes of his pen work. Or at least they do in some of the sections. The extended dream-like sequence is entirely framed in squares and rectangles, an extremely common approach that feels sudden and unexpected when introduced half way through the collection.

The prize story of the collection is chapter four’s “Ballet”, which features a female dancer performing overtop layouts of seemingly unrelated images rendered in contrastingly thin lines that further separate the dancer’s thick outlines. The 11-page background story appears to involve female cowboys and fistfights, but it’s literally secondary to the figure obscuring half of the content. That extreme disconnect is a peculiar delight, pushing hard against the norms of narrative. The even bigger payoff comes in the unnumbered sixth chapter titled “unfinished and unpublished”, which opens with a draft of the background story before Blutch apparently decided to repurpose it as literal surface material for his dance.

The eclectic nature of Mitchum makes it hard to summarize — there’s the colonial artist painting a portrait of a slave-owner’s wife or the devil crow who barters for a man’s daughter so he can take her down to hell and—you guessed it—draw her — but Blotch accepts the term “emotional diary”, explaining in an interview with Paul Gravett: “Mitchum was my laboratory… Every kind of experiment was permitted. Their success or failure were secondary. The only rule to respect was the excitement of making them.”

Blotch translates that excitement to his viewers too. Ultimately, we’re not looking at his models. We’re looking at him. 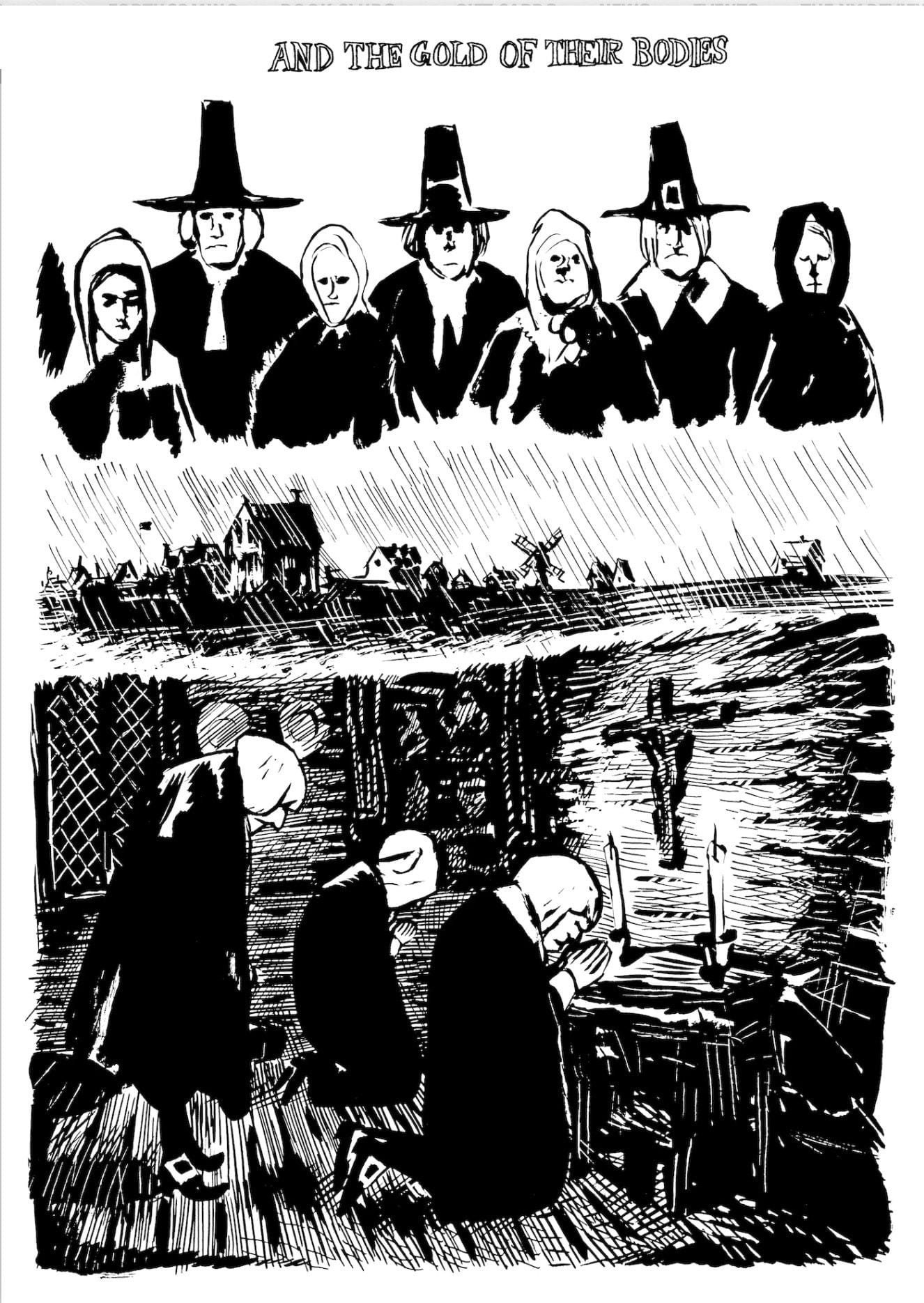 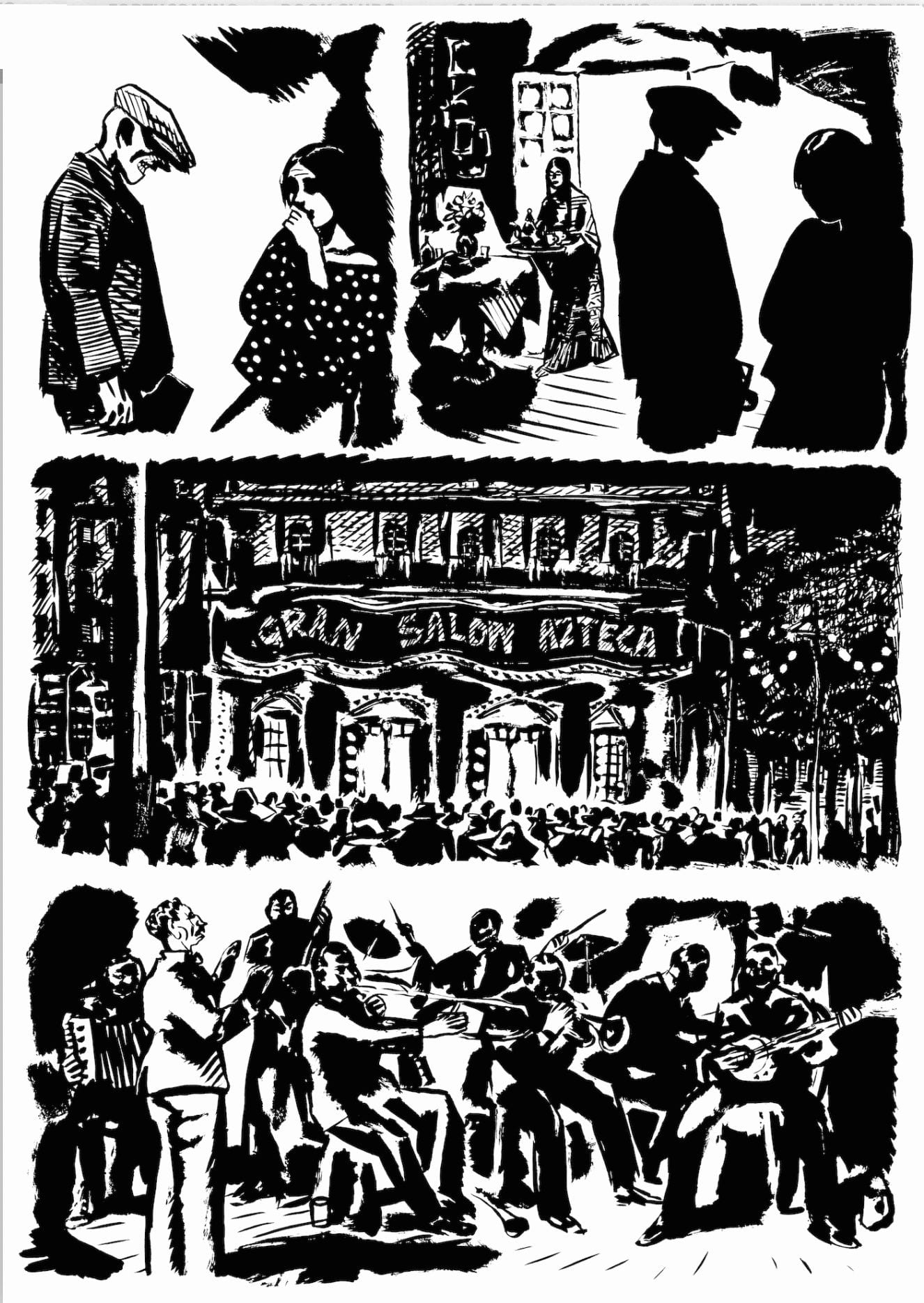 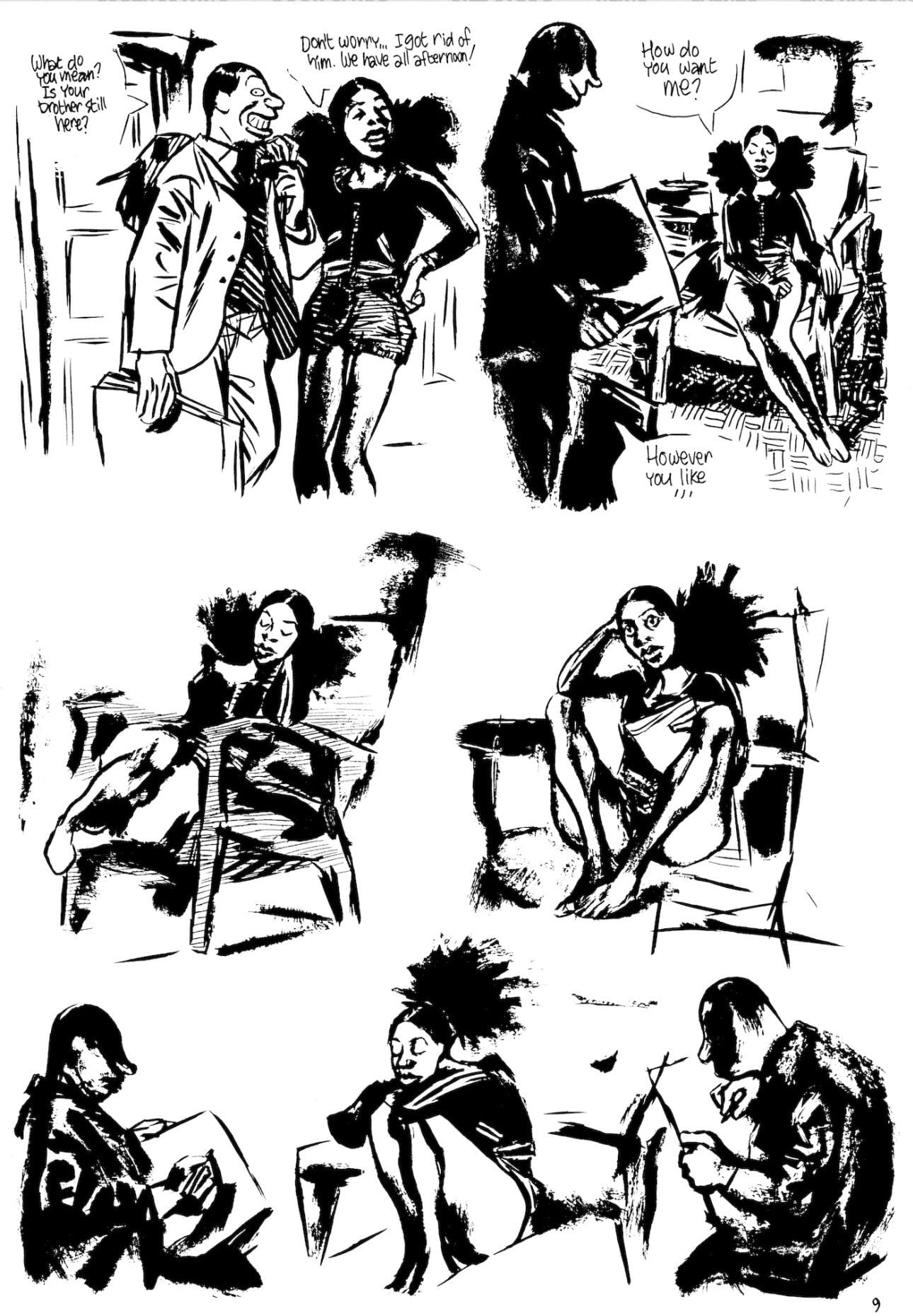 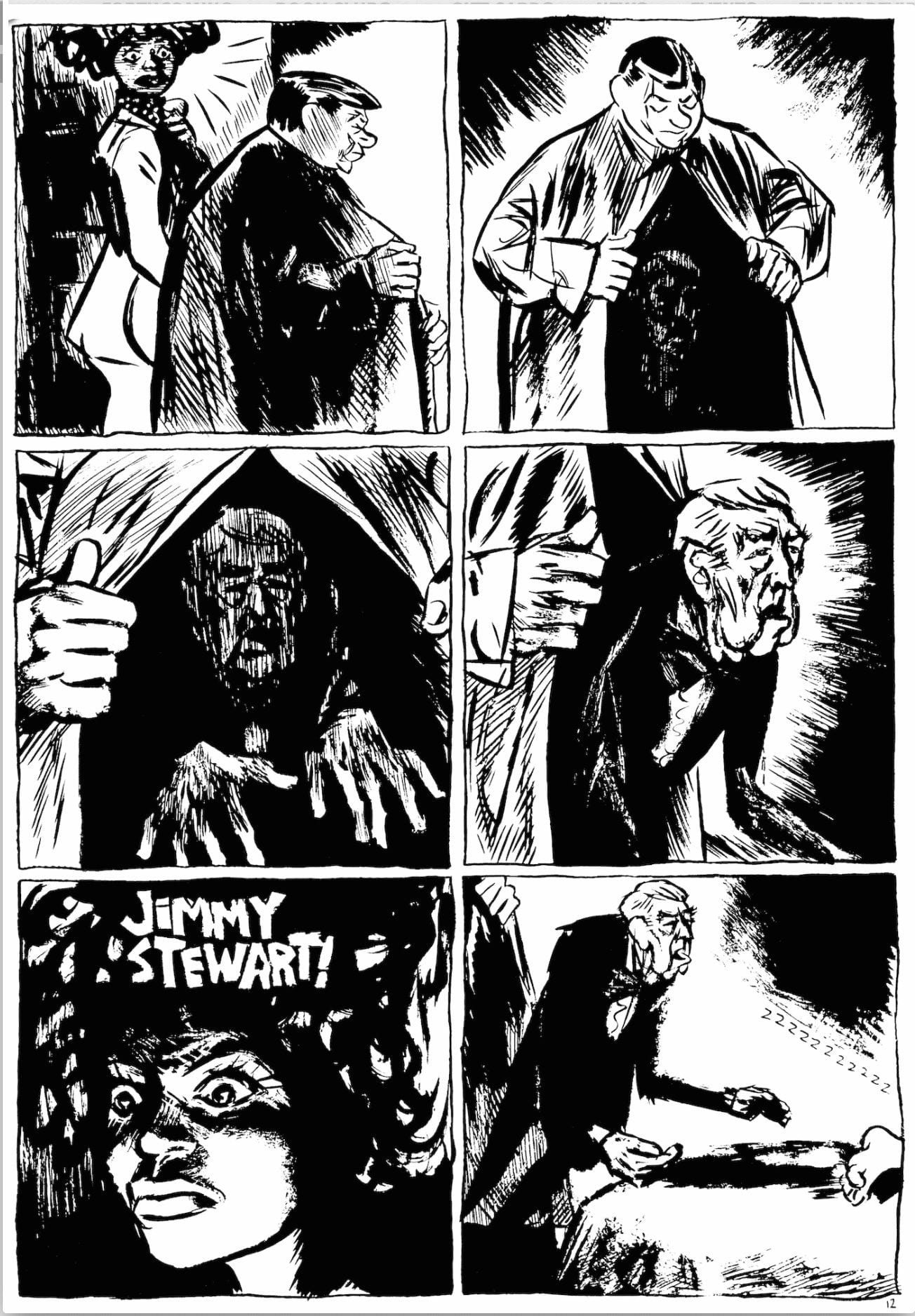