One of the controversial plot twists in David Jesus Vignolli‘s graphic novel New World involves the evil, slave-trading white man transforming into a literal monster. Unnecessary and overkill, assert some reviewers, given that humans can be monstrous enough as they are.

But for a comic that is centred on resistance against white colonization of the Americas, I don’t think that it’s overkill. It’s a very real representation of the extreme violence brought by white settlers to the Americas. Yes, they were very real, very human monsters – but the scale of their monstrosity really cannot be overstated, and by presenting the white antagonist as a monster the author is reminding us of this in very real, very graphic terms.

That said, the critics’ point is understandable. It’s the same critique that left me ambivalent about the otherwise fun Abraham Lincoln, Vampire Hunter. The twist of that comic by Seth Grahame-Smith (and later, Timur Bekmambetov’s blockbuster film) was undeniably original: the secessionist and pro-slavery southern US states were run by vampires who needed Black bodies as victims; and the plot device is profoundly accurate in a deeply metaphorical sense. But to suggest that the proponents of slavery were under the control of otherworldly, non-human beings risks exculpating slavery’s very human proponents from the blame they deserve. Slavery was enacted by monsters, but they were very real, very human, very American monsters, and it is vital that we not forget that.

Vignolli, a Brazilian comics artist, has created a very special book in New World. It’s a historical fiction of first contact, with the fiery Indigenous American warrior Iracena leading a resistance against the newly-arrived white European sailors and slave-traders. She rescues the enslaved African warrior-musician Amakai, also a victim of the white man’s evil, and they join forces to battle the monstrous invaders. The story is rooted in the magical realism genre in which Latin American literature excels – Iracena’s endearing familiar is a magical toucan, which can transform into a giant bird that she rides into battle. 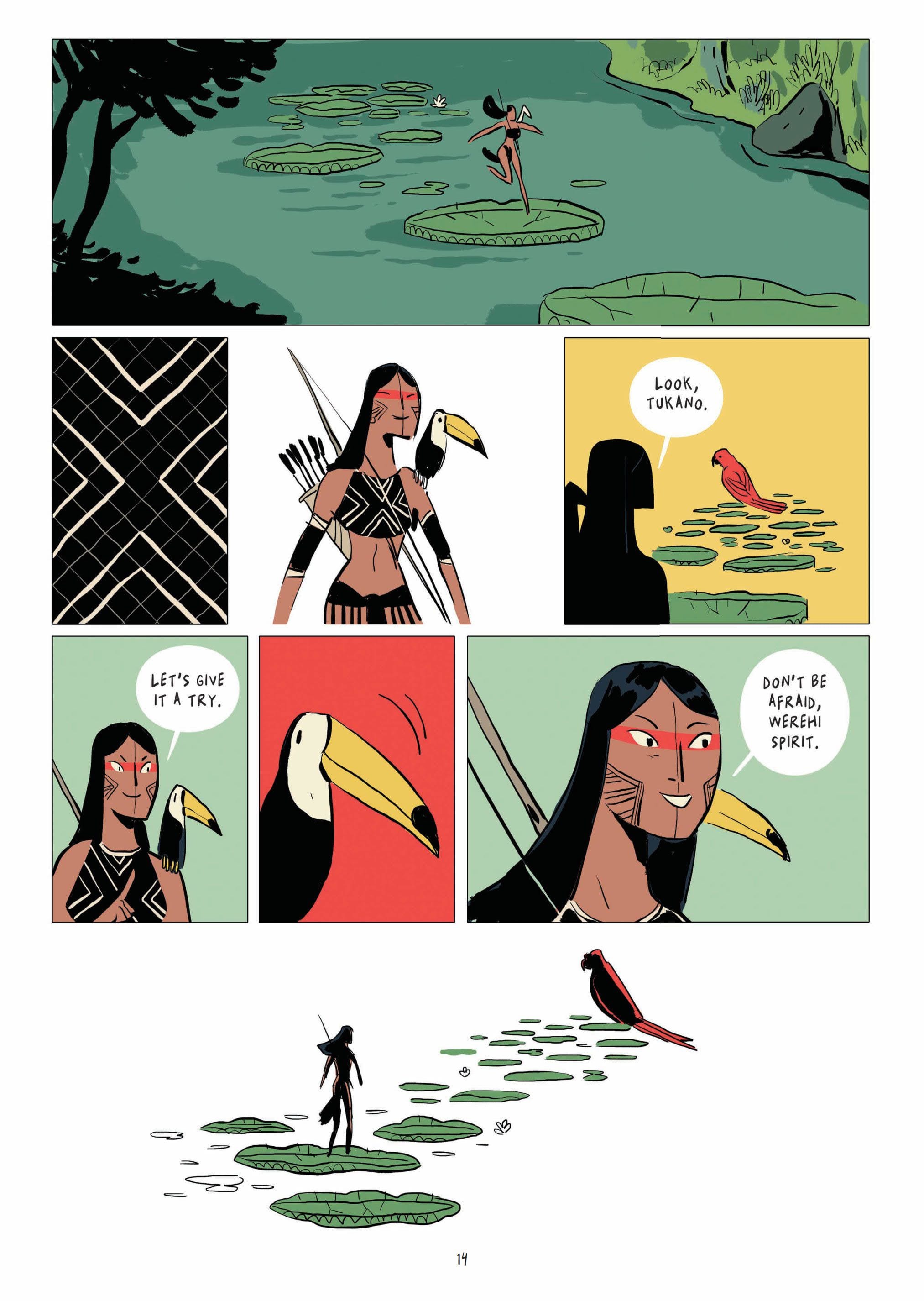 The monstrous white man is a very appropriate vehicle for villainy in the story, but more difficult to reconcile is the role played by Bartolomeu Dias. In real life he was a 15th-century Portuguese explorer whose charting of routes to Africa and Asia played a vital role in establishing the African slave trade. In New World, he plays a more fantastical role: he regrets his historical contribution and has been granted a magical ship that can travel through time and space; he sails it seeking redemption. An ambivalent ally, in other words, whom the story’s protagonists don’t know if they can trust. Yet his help will prove necessary in their fight to stop the white man from ravaging their land and communities.

In a sense, Dias is the personification of white guilt. The author made a good selection – Dias’ role in maritime exploration helped make the trans-oceanic slave trade as well as the European invasion of the Americas both possible. Does he bear personal responsibility for those consequences, though? And, horrified as his character in the book is by what came of these explorations, does he deserve forgiveness? Can a white man be forgiven the unintentional consequences of his actions? Can he set aside the white privilege from which he implicitly benefits?

One might interpret Vignolli’s tale as suggesting a line ought to be drawn between those who actively benefit from white privilege and its oppressive legacy, and those who acknowledge its injustice and earnestly desire change. The former are monsters who must be slain; the latter, necessary allies to be trusted. Of course, Dias demonstrates that it’s not good enough to simply want change and justice – one must actively aid in the struggle.

The mythology underpinning the tale is intriguing as well. Iracena wields a magical bow; Amakai was possessor of a magical flute. These represent a dwindling array of magical tools granted to humankind in a mythic past with which to fight prehistoric beasts and monsters, and will prove vital in confronting the white man. 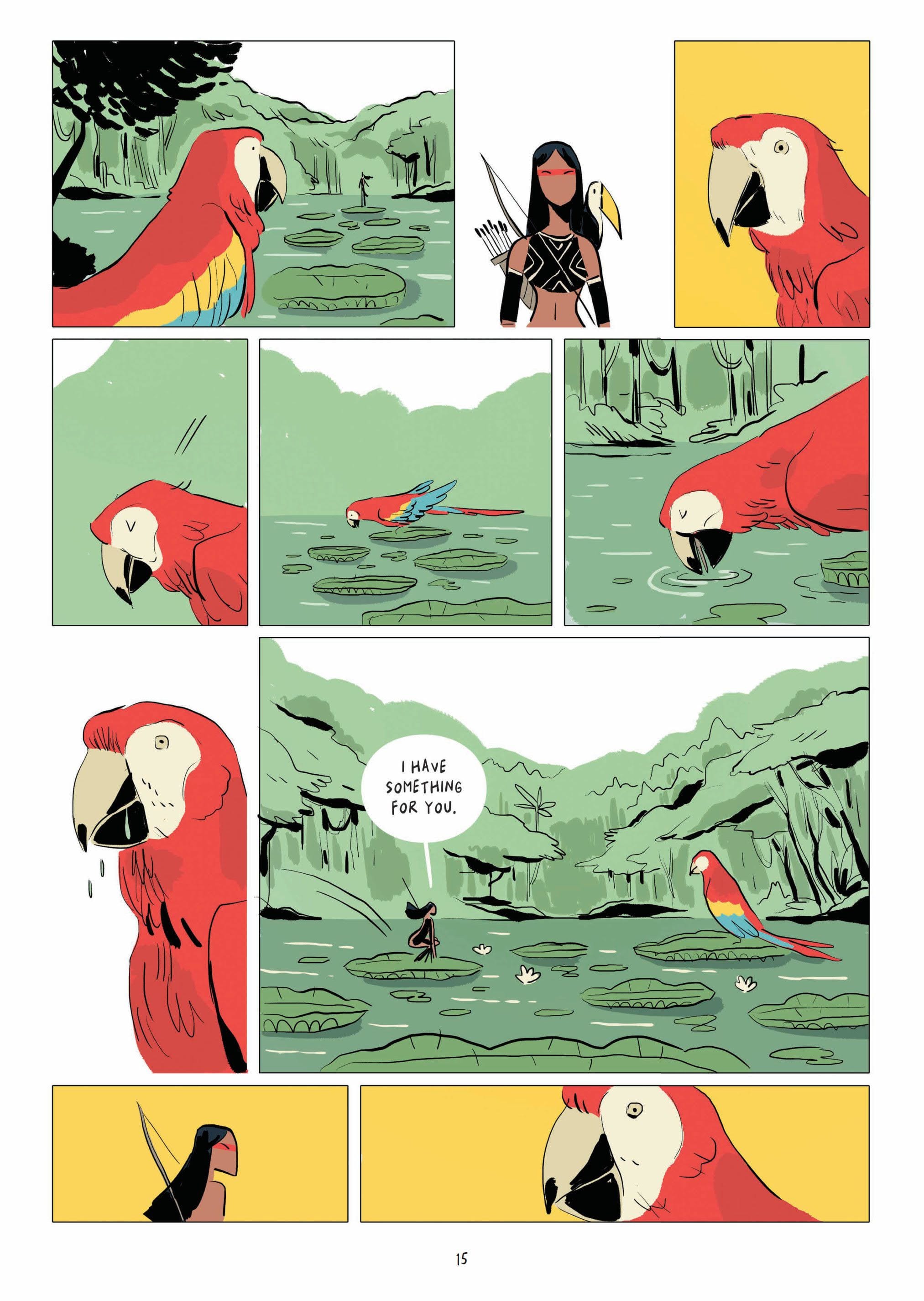 The tribes of white men, too, were granted magical tools, but they used theirs for evil, turning them against their fellow humans to slave and exploit. A sad irony – the tools white men used to survive and which could have been used to ensure their tranquil happiness became instead the tools of other people’s misery. The story’s magical realism provides an apt metaphor for the tragic true history on which it is based.

When the white sailors and slavers first appear, Iracena’s tribe faces a difficult choice: fight or flee? But what makes the choice difficult, one of the tribal elders observes, is their inability to distinguish which white men are truly monsters in disguise, and which are not. This challenge remains to this day.

New World is a striking and unusual comic. It’s full of bright, garish colours and sharply angular characters, and these lend the panels an almost preternatural beauty. The author plays with dimension and form: the artwork is familiar enough to impress us as beautiful, but it occupies a liminal space just this side of the unnatural.

Vignolli deserves credit for creating a beautiful and original comic. If he had chosen sombre, black and white shades to use in its telling, this would have been more in line with the tendency of contemporary artists to mirror dark stories with dark art. He went the other way, juxtaposing a grim backdrop with the brightest colour palette possible. Does this reflect, perhaps, the resistance of bright, colourful Indigeneity against the white man’s heart of darkness?

Whatever reading we choose, New World is a work of tremendous beauty and art. The story’s pacing is at times fast, and the plot can be confusing to follow at points. But the book’s heart is in the right place, and its dazzling artwork and deeply allegorical roots offer a magical comic that is well worth reading.