With Undocumented: A Worker’s Fight, award-winning Mexican-American author Duncan Tonatiuh shows how stories that are all too common can be reinvented in powerful new ways toward vital contemporary purpose, sometimes by drawing on age-old traditions.

The story told in Undocumented is not a new one. Juan, an Indigenous Mexican who doesn’t even speak Spanish, let alone English, is sent (illegally) across the US border to live with an uncle he’s never seen. After a few attempts, he makes it across. He gets a job in a restaurant where he and his co-workers are exploited by their boss. He gets married and struggles to eke out enough money to survive and raise a family, while continuing to face poverty-level working conditions and exploitative bosses.

The whole story can be read in minutes, and is a fairly obvious pitch for the laudable efforts of Workers’ Action Centres. Workers’ Action Centres are a widespread, decentralized worker-led movement akin to unions, but they operate on a more grassroots and democratic basis, and often seek to organize and support workers for whom unionizing is not an option, either because unions aren’t interested in organizing them or because labour laws make it difficult for them to do so. (Hence, they often wind up organizing undocumented workers.) They serve an educational as well as activist function, and their tactics are similar to those of unions, but because they operate outside of the legislative framework of labour relations laws, they’re often more inventive and creative in their direct action approach.

That they aren’t recognized legally the same way unions are acts as a double-edged sword: on the one hand they can’t tap into the various labour laws which are associated with union rights; yet this very fact often lends itself to more creative, grassroots and radical action on the activists’ part. In a way, they’re closer in form and strategy to what the union movement used to be before union recognition by government led to their co-optation (as some would argue) into the legalistic, bureaucratic machinery of corporate America. 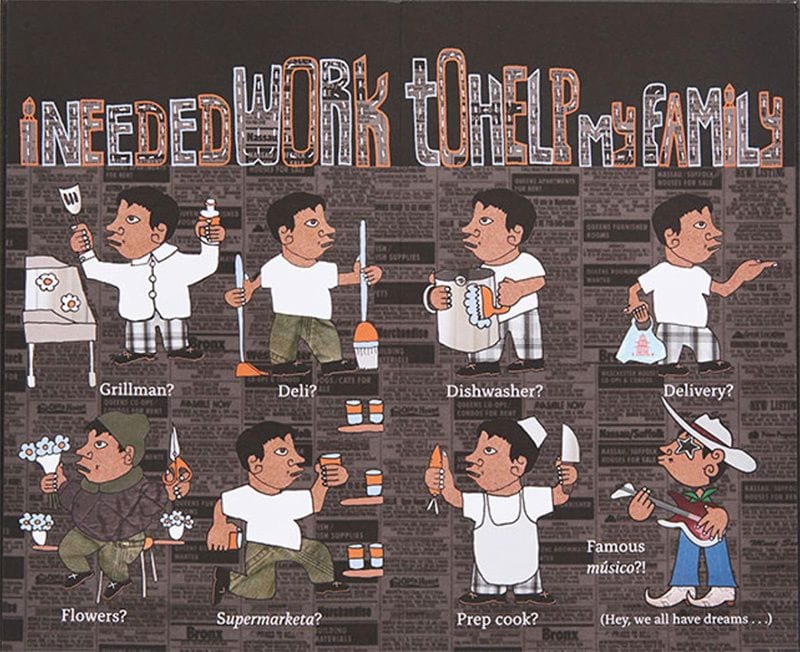 What renders Undocumented so unique—stunning, even—is its visual presentation. Rather than adopting standard book form, Tonatiuh fashioned the work in the style of an ancient Mixtec codex (his protagonist is of Mixtec descent). Pre-Columbian codices were incredibly elaborate, gorgeously illustrated fold-out documents, and like its predecessors this work unfolds into a magnificent 24-panel codex (twelve panels each side). The stunning work is beautifully illustrated in full-colour. The characters are depicted in Indigenous, pre-Columbian artistic style, which is profoundly striking when modern characters and settings are rendered in the form.

Presented in this form, the tale assumes a very different tone from that usually conveyed by this otherwise tragically common narrative. The reader’s gaze and attention follows the sinuous, breathtakingly illustrated trail of art and first-person narrative text, and the effect is that of reading a piece of literature situated somewhere between an ancient epic and a modern manifesto. The combination of unique, Indigenous artistic style with the simply told narrative lends it a truly heroic timbre. The result gives the narrative a triumphal, epic feel.

Tonatiuh’s adoption of this form is a brilliant one. Not only does it decentre the reader’s expectations, but it transforms a narrative which usually depicts its undocumented immigrant protagonists as victims—intentionally or not—into one in which they are heroes, assuming the place of Indigenous warriors and sages of mythic stature. Even an ostensible weakness—English language facility—becomes a strength, as activists outwit their exploitative employers by using Mixtec language to organize. 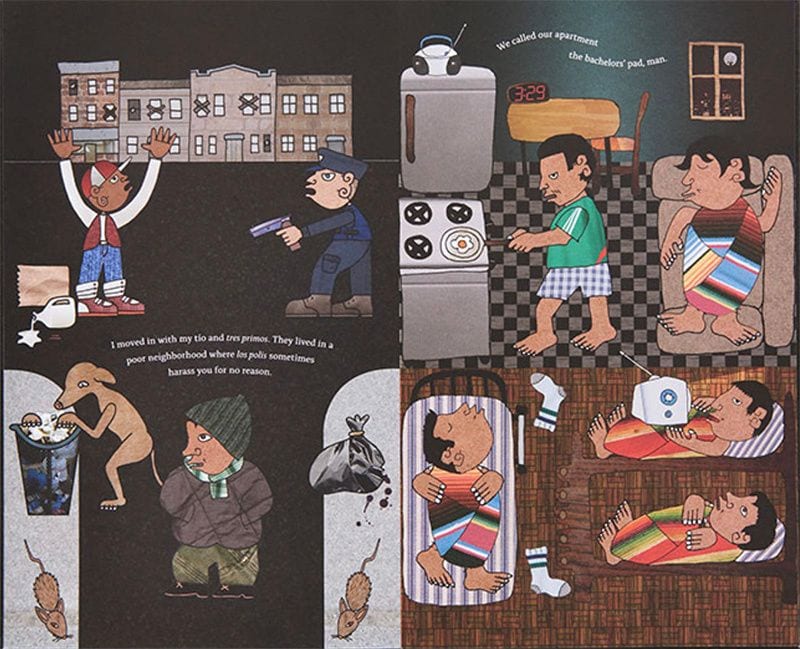 There’s something deeply fitting about taking this latest story of the continent’s Indigenous peoples, and depicting the ongoing struggle against colonialism in Indigenous literary form. Presenting the story through this medium helps remind the reader that the entire struggle around borders and citizenship status is not one about legality, as America’s governments usually claim, but that it is a continuation of the same struggle for cultural preservation and self-determination in the face of colonial genocide which has carried on since European contact.

Yes, it’s a short read, and yes it’s clearly designed to promote the efforts of Workers’ Action Centres, but the book’s unorthodox presentation helps to reframe its otherwise common and didactic narrative into a dramatically revolutionary form. If such stories, written against colonialism, can challenge colonialism not only in their literary content but in their very medium of presentation, then it’s a profound reminder of the power of artistic and narrative form to strengthen and transform literature in provocative political ways.

Undocumented: A Worker’s Fight is a beautiful, powerful, vital tale. It’s one that can be read in minutes, but whose effect will linger for days. Moreover it’s best read slowly, savouring each and every illustration and the manner in which they flow into each other. Undocumented doesn’t plead for our sympathy; on the contrary it grips our attention with a powerful and defiant battle cry against the sustained brutality of colonialism, racism and capitalism. 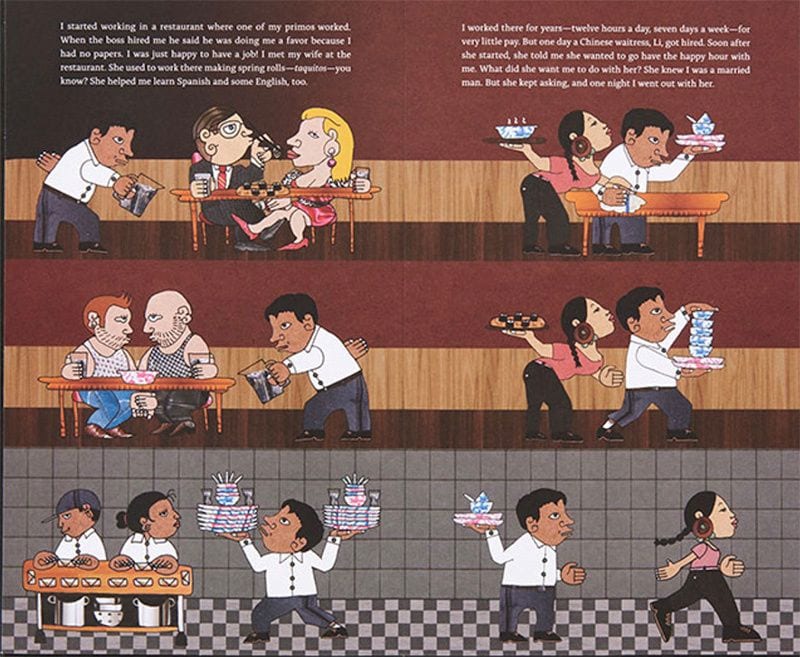 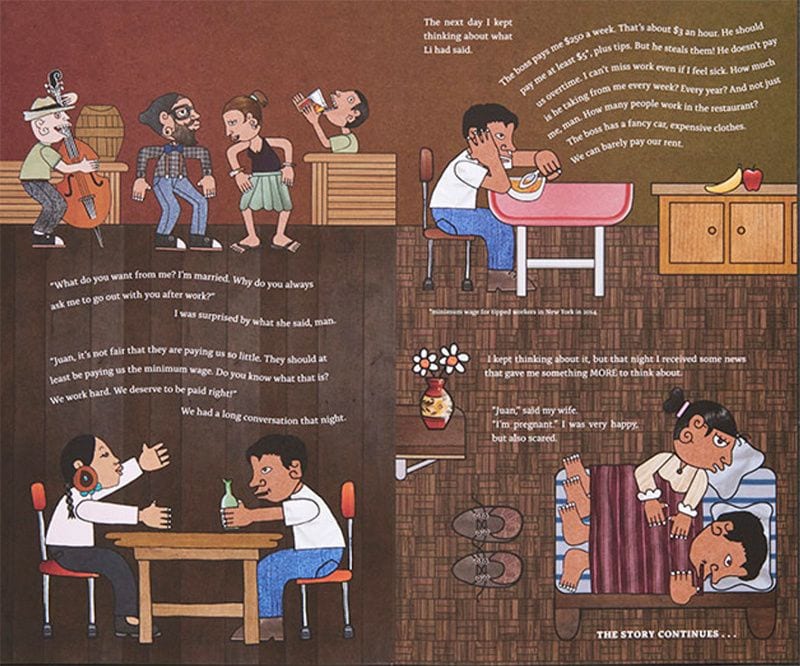