It’s a Saturday night in Northern California, and the Branford Marsalis Quartet is wrapping up a week in the Bay Area with a show here at the Green Music Center on the campus of Sonoma State University in Rohnert Park. The venue is another of the pristine performance arts centers that have become trendy in recent years, this one featuring rows of church style seating that lend the concert hall a bit of a sacred vibe. The positive side is crystal clear acoustics, while the negative side is that no beverages are permitted into the concert hall itself. But the band did also just play three nights at the more traditional jazz club Yoshi’s in Oakland, as well as a stop in Santa Cruz.

It’s a college football Saturday, and New Orleans native Marsalis is understandably pleased with how his Louisiana State Tigers have earlier defeated the Alabama Crimson Tide in a big showdown match that moves the Tigers to the #1 ranking in the country. That puts the renowned saxman in a more festive mood than his last trip to the region, when he had to finish a weekend run at SF Jazz last January after the New Orleans Saints had suffered a heartbreaking defeat to the Los Angeles Rams in the NFC Championship game earlier that day. Marsalis immediately makes a note of LSU’s big win when the quartet hits the stage, which gets a big cheer presumably since most Californians justifiably don’t much care for the political climate in Alabama nor Nick Saban’s team.

Marsalis says he only got to see the first half of the game because he was driving over to the venue and didn’t want to pay too much attention to the game on the tiny roads he was traversing. Sonoma County is known for some windy back roads, although the drive up from Marin County is a fairly simple one without too many twists and turns. Being both an avid sports fan and a keen socio-political observer, Marsalis is one of the more interesting artists to follow on Twitter, where he regularly tweets commentary on music, sports, public affairs, and his ongoing tour travels around the world.

The quartet opens with “Nilaste”, an energetic song from bassist Eric Revis on the band’s new album The Secret Between the Shadow and the Soul. Marsalis begins on soprano sax, with the tune soon evolving into a free form jam where he and drummer Justin Faulkner challenge each other in a free jazz freakout that resonates with some extra power thanks to the venue’s high ceilings and big reverb. The group doesn’t tour behind albums like rock bands do as Marsalis has noted in interviews, but the set later features another song from the album in Marsalis’ “Life Filtering from the Water Flowers”.

He leads the band on tenor sax through a slow build before pianist Joey Calderazzo stars as well, laying down some flowing piano lines that the rest of the band adds artful accents behind. Marsalis takes the musical baton, and his fluid lines soon find the tempo increasing through a dynamic jam where the quartet’s wide-ranging tone science mastery is on display. Marsalis pauses at one point to give a shoutout to some of Sonoma County’s first responders and firefighters in the audience. “Because what we saw on TV was insane” he says, referencing the recent Kincade fire that marked the third straight autumn in which the region has had to deal with apocalyptic wildfires.

The band follows with an old-timey tune and Marsalis back on soprano sax before he moves back to tenor for Irving Berlin’s “Cheek to Cheek”, a number Marsalis recorded on his 2000 album Contemporary Jazz. The quartet really gels here as Marsalis plays nimble melodies over a groovy walking bass line from Revis and some upbeat percussion where Faulkner keeps pushing the beat to propel the music. Calderazzo delivers a dazzling piano solo as the bass line keeps moving, and then Marsalis and Faulkner get into some great interplay, with the drummer acting almost as a lead melodic player himself in dueling with the sax. 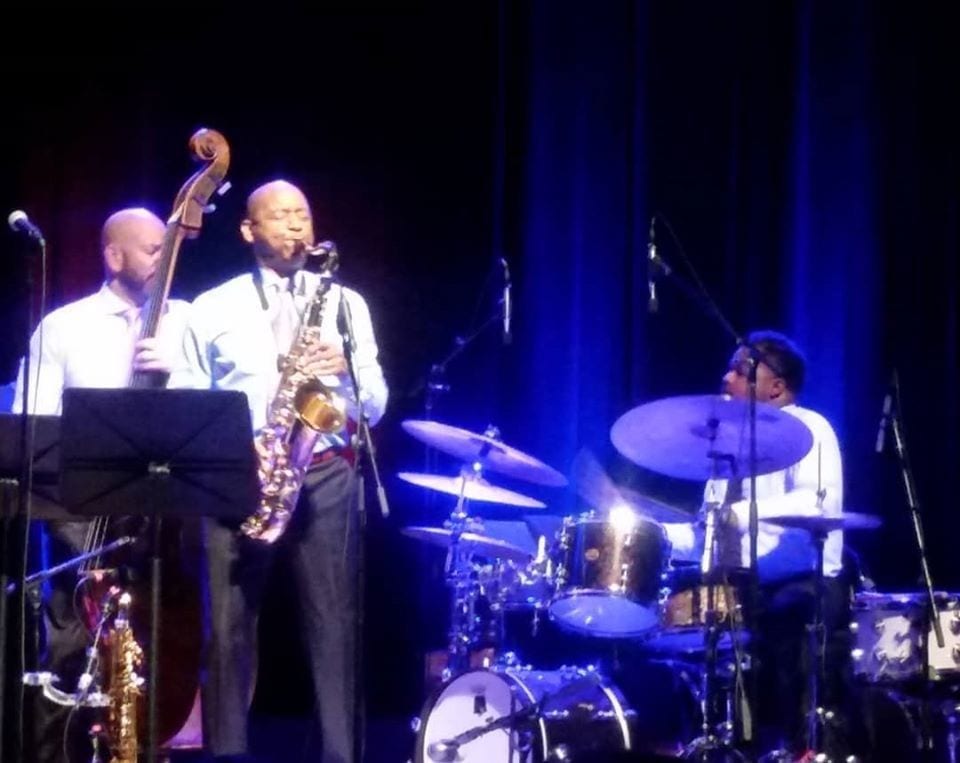 A detour into bossa nova territory finds the quartet exploring a number Marsalis says translated to “Useless Landscape” in the original Brazilian, but which has come to be known as “You Never Come to Me” in English. The ease with which the quartet weaves through various genres is truly impressive, for there are so many different styles in the jazz world and the Branford Marsalis Quartet seems to be a master of them all.

The group closes the set with a more traditional number that gets into a classic jazz sound, featuring a jam with quotes on Duke Ellington’s “It Don’t Mean a Thing (If it Ain’t Got that Swing)”. This quartet can swing with the best of them and delivers a crowd-pleasing jam here, with Marsalis and Calderazzo playing liquid melodies that seem to dance over the up-beat groove from the rhythm section. It’s hard to believe the set has ended in what seems like a fairly brief time, but clocks indicate that it’s been about 90 minutes since the band hit the stage. Time certainly can fly when world-class musicians are using their tone science skills to pull listeners out of the mundane world and into a sonic landscape where time becomes less tangible.

Marsalis and his mates return for an encore on Sidney Bechet’s “Petite Fleur”, a classic New Orleans tune where Marsalis and Calderazzo weave delicate melodies together for a classy old school finish to the evening. Music trends will come and go, but classic jazz retains a timeless quality thanks in no small part to devoted artists like Branford Marsalis.