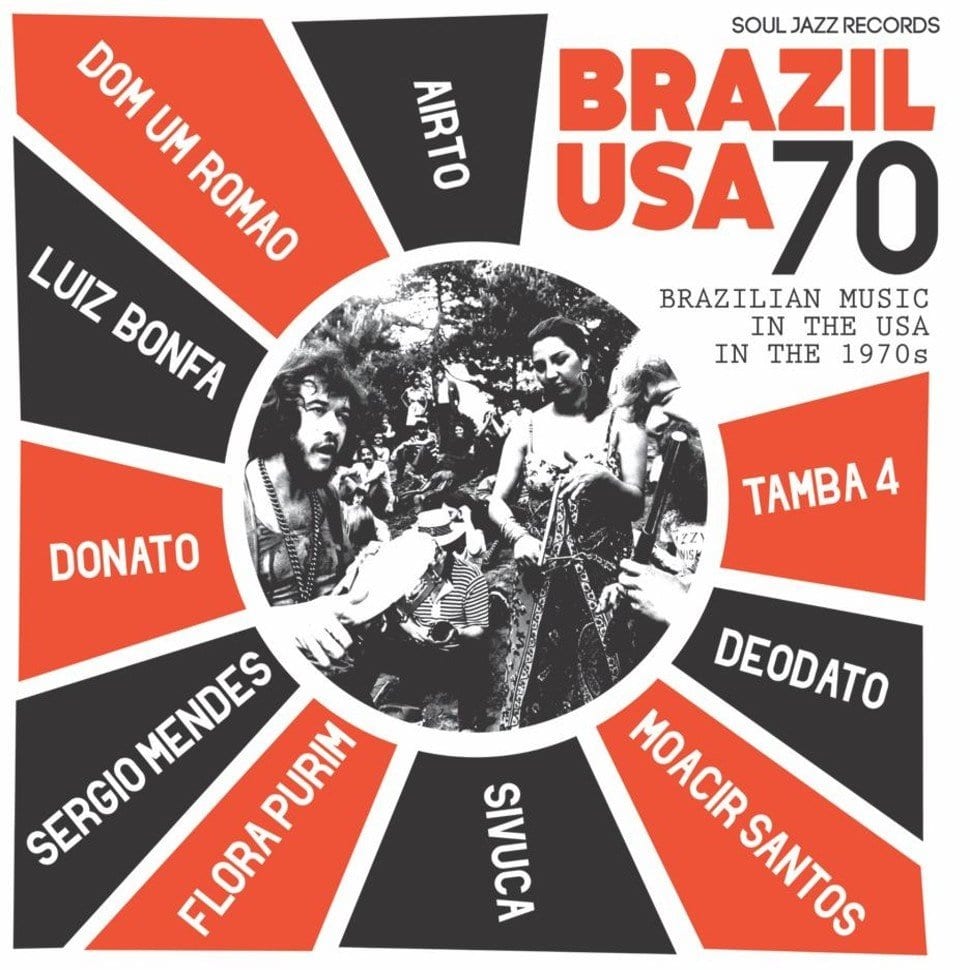 I love a compilation of 1970s samba as much as the next person. But I’ll readily admit that I no longer get unreservedly excited at the prospect of a new release in such a vein. By definition, music from a single place in a single period that has already happened should be a finite resource, even if it is as vast a time and place as ten years in Brazil.

As jaded as I am, though, I have to give credit where credit is due to Soul Jazz Records, a label that continues to find genuinely interesting new angles on old tropes. On Brazil USA 70: Brazilian Music in the USA in the 1970’s, Soul Jazz brings us a double vinyl release of songs from Brazilian artists who, at samba’s international peak, found themselves making music in North America. The album includes some truly sensational cuts by some of samba’s greatest early innovators, with particularly mind-bending tracks from Flora Purim, Airto Moreira, and Dom Um Romão, among others.

Mononymous Airto kicks off the album with “Samba De Flora”, a dance track inspired and co-produced by Purim – the wife he followed to the States – and buzzing with action from start to finish. Runs of keys and flurries of percussion back impassioned vocals, banishing any concept of samba as easy listening. Jazz pianist Duke Pearson sparkles as he accompanies equally virtuosic singer Purim on breezy “Sandalia Dela”. Sérgio Mendes and Brasil ’66 – easily Mendes’ most listenable band – are in fine form with rapidfire “Batucada”. Eumir Deodato’s classic horn-heavy “Skyscrapers” always sounds a little too much like a tropical game show theme to me. That is until John Tropea’s unstoppable electric guitar blazes through, leading Deodato’s quick keys into the fray, at which point it becomes a masterpiece.

On the b-side, psychedelia reigns. Milton Nascimento’s mellow “Catavento” features flute that imitates complex birdsong. Airto returns with “Tombo in 7/4”, a track that starts soft and ends in a frenzy, vocals and horns in unison and keys rushing up and down. Luiz Bonfá calls on moonlit berimbau and acoustic guitar for stunning “Bahia Soul”, which holds all the drama of a spy thriller score. Best known for his work with Weather Report, Dom Um Romão ends the record with “Braun-Blek-Blu”, a wonderfully chaotic cut where solid walls of percussion are broken up by echoing repetitions of the title.

Simply romantic “Kathy” is a straightforward ballad from Moacir Santos. In sharp contrast follows funk groove “Almas Irmãs” by João Donato. Sivuca’s samba-infused cover of “Ain’t No Sunshine” is one of the weaker moments of the compilation – not a bad cover, necessarily, but a definite cliché. Fortunately, this side ends on a high note: Milton Nascimento again, accompanied by violins on the breathtaking “Rio Vermelho”.

Tamba’s “Consolation” is a miniature suite, an instrumental jazz track of small-scale grandeur that leads gently into the simmering cymbals that open Purim’s entrancing “Moon Dreams”. “Escravos De Jo” is a final brassy track from Romão, a warm and balanced midpoint between American and Brazilian jazz sounds. That leads us to our final track: Airto’s “Andei”, whose opening berimbau line leads into a simple, rollicking jam graced with flute and exuberant vocable flourishes and, ultimately, an open ending.

The curators at Soul Jazz rarely misstep in putting together a new compilation, and Brazil USA 70 is no exception. The vast majority of tracks here are well worth a listen on their own. Assembled as they are on this new release, they set a remarkable scene, mapping out intersections between a pair of nations arguably essential to contemporary jazz. Positioned at this spatial and temporal crossroads, Brazil USA 70 provides a very good sampler of a brilliant musical phenomenon.