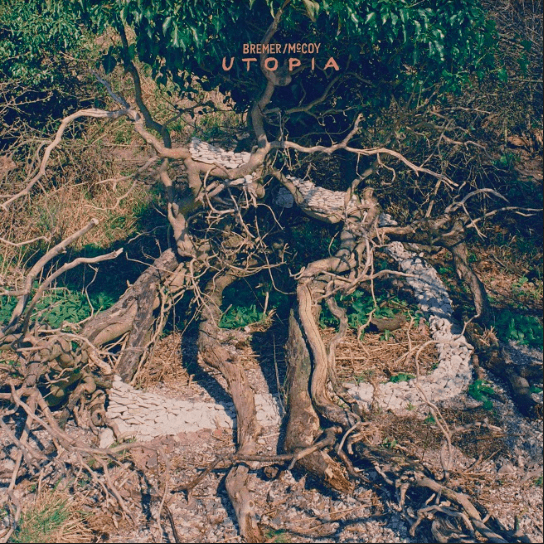 Bremer/McCoy’s new album, Utopia, would be the perfect soundtrack to an as-yet-unmade Peanuts television special, in which Charlie Brown and his friends walk along the outskirts of a haunted forest on an overcast autumn day. Occasional contemplative remarks are exchanged, but the gang walks silently for long periods, with Bremer/McCoy’s keyboards and bass quietly filling the void. There is no dancing.

This imaginary Peanuts special, It’s an Existential Autumn Afternoon, Charlie Brown would air late on a Sunday afternoon, during that three-week lull between It’s the Great Pumpkin, Charlie Brown and A Charlie Brown Thanksgiving. This is all meant as a compliment. Though they are a duo, Bremer/McCoy are, in their quiet way, the moody musical descendants of the Vince Guaraldi Trio.

Denmark’s Jonathan Bremer (acoustic bass) and Morten McCoy (piano, Wurlitzer, and tape-delays) have been friends since childhood and have released three albums since teaming up as a musical duo in 2013. Utopia is Bremer/McCoy’s debut album for Luaka Bop, the label founded by former Talking Head David Byrne.

Bremer and McCoy each bring their own unique musical experience to the duo. Since 2010, Bremer has made a name for himself as a key bassist in the Danish jazz scene and has toured with major acts. McCoy, meanwhile, has been a student of Jamaican and African music and has done extensive analog production work. More importantly, though it can’t easily be quantified or adequately explained, the duo’s nearly lifelong friendship seems to bring an unspoken intimacy to the music that makes it feel more substantive than it otherwise might.

Working in analog has been Bremer/McCoy’s principal production mode. While tape is manipulated to achieve certain effects on Utopia, there is no digital technology to be found. The resulting sound is warm and inviting, even as the songs themselves can evoke feelings of solitary contemplation.

Tunes like “Højder” and “Tusmørke” are typical of Utopia. Bremer’s insistent bass grounds each track, giving McCoy the foundation to extrapolate melodies on the piano and Wurlitzer. Bremer’s bass occasionally surfaces in a more prominent lead role and manipulated tapes are used on “Tusmørke” and other tracks to provide atmospheric effects.

Utopia doesn’t fall easily into a neat musical category. There are quietly jazzy elements of the music that can remind one of Guaraldi, but there is not a sense of improvisation to the music that a listener might associate with jazz. The music has an ambient feel as well, but the relatively short compositions are never allowed to drift too long or become too formless.

There is a definite stylistic unity to the collective tracks of Utopia that might put off some potential listeners who are looking for more variety in an instrumental record. That also means there are no toe-tapper earworms to be found on Utopia. But anyone who is looking for a quiet collection of songs to soothe jangled nerves in these noisy times, and maybe to stimulate some dreams, thoughts, or ideas of their own, might find that Bremer/McCoy’s Utopia is just what they need.