There’s a scene in the gleefully vulgar Rudy Ray Moore biopic, Dolemite Is My Name, where a young boy fawns over the ’70s Blaxploitation icon. Dubbing himself a “ghetto expressionist”, Moore enjoyed fleeting success after adopting the persona of a foul-mouthed, Kungfu fighting pimp named Dolemite, who specialized in “f’ing up mother f’ers”. It’s not hard to imagine this impressionable young boy might have been Eddie Murphy. He was a teenager of the ’70s whose classic comedies of the early ’80s were clearly influenced by Moore’s cocksure sensibilities.

Fittingly, Moore has inspired Murphy’s return to R-rated comedy glory. Director Craig Brewer has modest aims for Dolemite Is My Name, seeking only to celebrate the man who influenced an entire generation of young Black performers. We’ve seen this ‘underdog beats the odds’ story before, but never about someone who trafficked in obscenity, Kungfu, and self-aggrandizement. Perhaps the closest we’ve come to this kind of anti-hero is porn impresario Larry Flynt. It’s no surprise, then, that screenwriters Scott Alexander and Larry Karaszewski, who co-wrote the 1996 Milos Forman film The People vs. Larry Flynt, were attracted to a fringe character like Rudy Ray Moore.

Boasting a potbelly and irrepressibly confident swagger, Moore (Murphy) schleps vinyl at a ghetto record store in Los Angeles. He harasses the store disc jockey (Snoop Dogg) to play one of the overlooked R&B records that he recorded back in the ’60s. Not surprisingly, Snoop refuses to play the regrettably titled, “Buggy Ride” for his teenage fanbase. Casting Snoop Dogg is a nice homage to Moore, who’s signature style of speaking in rhymes over a musical soundtrack has led historians to call him “the Godfather of Rap”.

Music was just one of many angles Moore played in his unlikely quest for stardom. He was also a magician, a preacher, a dancer, and probably anything else that promised a paycheck. It wasn’t until he discovered stand-up comedy in the early ’70s – inspired by the tall-tales surrounding a legendary neighborhood lothario named Dolemite – that Moore truly found his show business niche. Encouraged by his record store co-worker (Tituss Burgess) and some neighborhood musician friends (Craig Robinson and Mike Epps), Moore carefully molds the braggadocious persona of Dolemite into his own hilariously warped vision of masculinity. 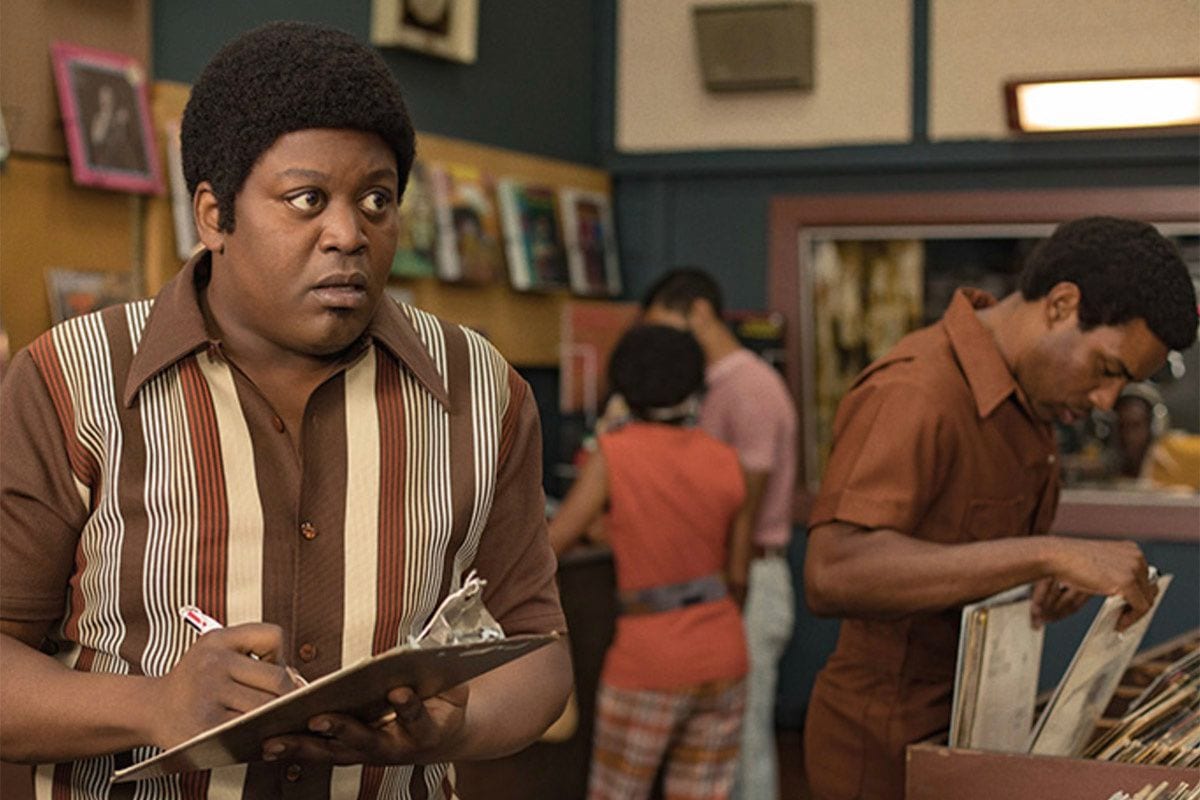 Donning a garish tuxedo, unkept Afro wig, and ostentatious cane, Moore storms the stage with a bizarre hybrid of Redd Foxx obscenity and stripped-down Nipsey Russell rhyming. There’s nothing subtle about Moore’s act. He takes great care in reciting his sexual exploits, as well as the many butt-kickings he has administered to opponents. Moore’s humor might not be at your tempo, but watching this hard-luck character find his calling is an undeniable delight.

Murphy wisely avoids doing a Rudy Ray Moore impersonation. Instead, he embodies Moore; breathing fire into his words and putting a gleam in his mischievous eye. It’s a manner and style reminiscent of Murphy’s turn as the jive-talking street hustler (‘Billy Ray Valentine’) from 1983’s Trading Places. Watching Murphy re-discover this irreverent persona is somewhat bittersweet; a pleasure to watch his raw talent on display, but painful to think of all the talent he squandered on uninspired family comedies like Daddy Day Care and Doctor Dolittle.

Murphy also gets an occasional chance to flash his dramatic chops. When film executives dismiss Moore’s appeal as limited to only “five blocks of people he knows”, Moore defiantly snaps back, “Every city has those same five blocks!” Moore knows the only thing separating him from the drunken hobos lining the streets outside his house is his refusal to accept failure. “I want the world to know I exist,” is his stubborn refrain. It’s in these scenes that Murphy pushes aside the blustering entertainer and connects with Moore the outcast; the man who needed a powerful alter-ego like Dolemite to overcome his insecurities.

Screenwriters Alexander and Karaszewski (co-writers of the imminently quotable 1994 biopic, Ed Wood) wisely focus on the obstacles surrounding the production of Moore’s 1975 feature debut, Dolemite. There are the obvious financial difficulties – Moore had to live in his studio to save money – but there was also Moore’s self-doubt as a performer. Morbidly self-conscious about his portly appearance, Moore almost abandons the production over a sex scene in the script. He overcomes this fear by playing the scene for laughs, resulting in a fit of raucous lovemaking that literally brings down the house. 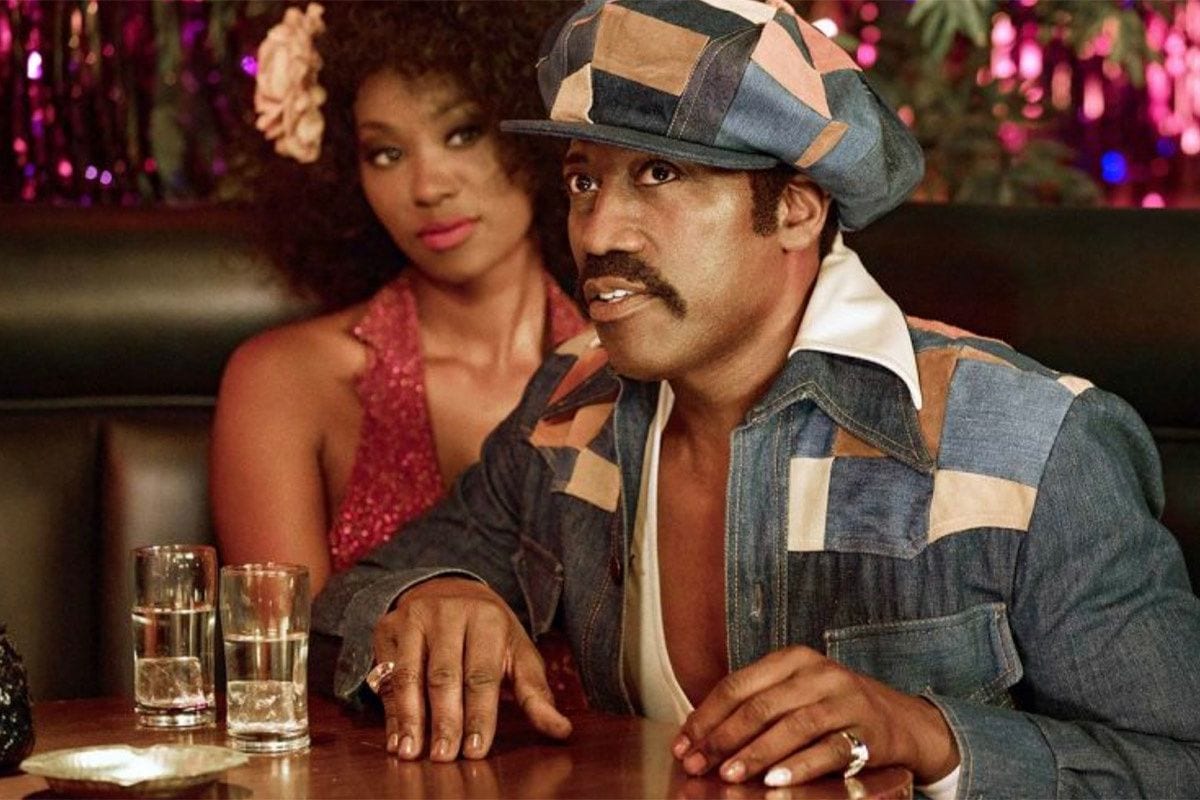 Murphy is surrounded by a strong supporting cast, including Wesley Snipes as the pompous actor-turned-director, D’Urville Martin, who acts like his role as the elevator man in Rosemary’s Baby makes him Hollywood royalty. Most noteworthy is a sensational turn from Da’Vine Joy Randolph as Moore’s female protégé, Lady Reed. Moore pulls Lady Reed from domestic obscurity and empowers her to take the stage as a blistering stand-up comedian. It’s a surprisingly progressive move for Moore, as there were few known female comedians in the ’70s, let alone Black female comedians.

Sadly, this is the only surprising tidbit we get about Moore. Everything else reads like the highlights from a Wikipedia page. It’s a tribute to Murphy’s considerable acting talents that we still forge an emotional connection to our cartoonish hero. Director Craig Brewer (Black Snake Moan (2006), Hustle & Flow (2005)) keeps everything on a superficial level with a no-frills directorial style. He simply points the camera at Murphy and lets his star shine. If you’re looking for an insightful glimpse into what made Moore tick, you’ve come to the wrong place.

In a peculiar way, Rudy Ray Moore was the ultimate independent filmmaker. With nothing but an unwavering belief in his lofty dreams, Moore willed his creations into existence. He hustled relentlessly to finance his films and then guided every step of the creative process. Dolemite Is My Name celebrates his independent (and vulgar) spirit with a fittingly entertaining and breezy tribute.