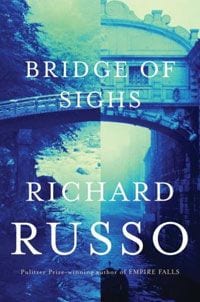 Richard Russo, Pulitzer-prize winning author of Empire Falls, is back with his first novel in six years and once again dragging the rivers of quiet suburban life. Bridge of Sighs takes place in Thomaston, an imagined town in upstate New York, and tells the story of Lou Lynch, lifetime resident of the town and owner and proprietor of a local convenience store. As we pick up the story, Lynch and his wife Sarah are 60 years old and planning a trip to Italy to, among other things, see their childhood friend Bobby Marconi. Bobby is now a budding painter, and has changed his name to Bobby Noonan to distance himself from his abusive father.

We see early on that Lou, like his father before him, prefers to take things at face value. He likes Thomaston, even if it might be a quiet place that he’s never had the chance to get away from for very long. The trip to Italy is a source of apprehension for Lou, as he prefers to stay within the safe, well-known walls of his store. The only thing drawing him there is Noonan, who Lou looks forward to seeing, even if Noonan hasn’t answered his letters.

Those letters are not the only writing Lou Lynch has been doing, either. He’s begun to write his memoirs and, as we pick up the novel he is buried deep in reliving his childhood. Using this obvious device, Russo takes us back into Lynch’s past and he rarely looks back. The present action takes a back seat as Lynch tells us about meeting Bobby, about his optimistic father and his acerbically realistic mother, about coming to know his wife Sarah in high school. What becomes apparent, mainly through Lou’s mothers observations, is that Lynch doesn’t feel he’s changed much since childhood. He always wanted to be like his father — seeing things the way he wanted to see them, hoping for the best from people.

And, in the end, Bridge of Sighs seems to be Russo’s attempt to come to grips with the notion that none of us change. At one point, Sarah’s father, a quirky high school teacher, tells his class that by 15 or 16 our personalities are already established. There’s no more growing to do. We are who we are until we are buried. And, as we see Lynch’s childhood unfold, his moves become achingly predictable. We know he’ll long for Bobby’s friendship, hope he’ll call or write, even as Bobby is constantly pulling away. We know, when Sarah leaves for college, that Lou won’t be able to cope, will be sure that she will leave him for someone else. Someone better.

Even as he writes his memoirs, Lynch seems aware of their futility. He says at one point they could probably be called “The Most Boring Story Ever Told”. Of course, if Russo agrees with this defensive qualifier, it doesn’t come across in page count. The bulk of this big novel is spent in Lynch’s past, though occasionally we get the information from Sarah’s or Noonan’s recollections. And while these characters are typically well-done by Russo, full of everyday charm and believably muted quirks, in the end it is difficult for us to really know if Lynch — and Russo by extension — is right, if he’s stayed the same, because there is no balance between the past and present action.

Where Empire Falls used the history of a town, and the secret-riddled past of a family, to inform the present, Bridge of Sighs gets bogged down in the past more as a book than Lynch does as a character. Rather than informing the present, and revealing anything new about the characters, it overwhelms the present action. And because of the unbalance, when we get to the small plot twists that come towards the end of the book, they feel both rushed and a little flat.

The set-up to Bridge of Sighs may also be just a little too similar to its predecessor. Thomaston is the same sort of failing, end-of-an-era, small town as Empire Falls is, with a factory that manages to poison the river before it shuts down. Lou, like the Empire Grill’s Miles, runs a store that always seemed destined to fail but never does. And these similarities would be fine, but this novel just does not have the level of execution Empire Falls had, making the book feel like more of a rehash of themes we’ve seen Russo grapple with before and with better success.

Russo still has a quiet, confident charm to his prose in Bridge of Sighs, and the book is not without its stunning moments — particularly between Lou and his mother. But unfortunately, those moments are few and don’t quite add up to enough to keep the book afloat.

The Unreality of MTV’s Reality Shows