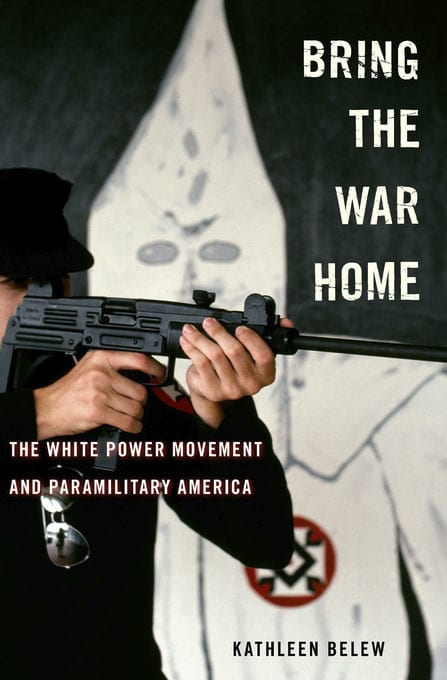 In Bring the War Home, Kathleen Belew, a history professor at the University of Chicago, offers a convincing case for the claim that the “lone wolf” domestic terrorist, an all-too-familiar figure in the United States, is instead a product of a well-organized, decades-old, right-wing social movement that brings together “a wide array of groups and activists previously at odds”, including Klansmen, skinheads, neo-Nazis, militiamen, Christian identitarians, tax protesters, and white separatists. From the late ’70s onward across the US, white extremists built a vast underground movement. Collectively, Belew deems them the “white power movement” who, as a group, “believe in a racial nation that would be transnational in scope… based on the belief that white people are the chosen people.”

However, despite the pervasive belief among members that white men are constant victims in the post-civil rights United States, it’s not just racism and white supremacy that unites these groups. Rather, the common thread that connects them, Belew argues, is disillusionment with the federal government in the aftermath of the Vietnam War. In this troubled historical context, veterans returned to Watergate, the oil crisis, inflation, shrinking wages, deindustrialization, international relocation of factory jobs, and an increasing wealth gap. Belew writes that “narratives of betrayal and crisis cemented their alliances”, as large segments of white men blamed their economic suffering on the alleged highjacking of the federal government by the recent rights movements. Vietnam veterans who had served a corrupt federal government in Southeast Asia only to become objects of stateside disdain and neglect, became the figures around which this widespread, white, male discontent coalesced. This discontent evolved into a social movement featuring “[a]contiguous activist of an inner circle of key figures for over two decades, frequent public displays, and development of a wide-reaching social network.”

Because the white power movement has always been “subversive” and attempted to hide its activities, Belew encountered many challenges in her research, including “secret membership rolls”, “cell-style organizing”, denial of involvement, and general “deliberate obfuscation”. Nevertheless, she painstakingly details the influence of the Vietnam wartime experience on the evolution of white power ideology. In the ’70s, as they returned to the United States, white veterans helped to militarize hate groups and spawn the organized white power movement. Belew offers many examples of these men and their groups, including Louis Beam, a Texas soldier turned Klansman whose paramilitary camp outside of Houston trained the “special forces” of the Ku Klux Klan to serve in an extralegal capacity in response to a government that they believed had abandoned them. These forces patrolled the Texas-Mexico border to harass and abuse undocumented immigrants, and, in what the New York Times called “one of the last pitched battles of the Vietnam War”, launched a campaign of intimidation against Vietnamese refugees in Houston. Beam’s training camp was forcibly shut down, but his model endured and spread across the South and West in the late ’70s and early ’80s.

This loose coalition of veteran paramilitary forces initially saw itself as acting in the interests of the state by policing immigration and practicing “vigilante violence”, however, Belew writes, the tenor, tone, and targets of the movement changed dramatically in 1983. That year, at the Aryan Nations World Congress in Idaho, Beam called for Klansmen and white veterans to “bring [the war] on home.” By this, he meant the “literal extension of military-style combat [in] civilian space,” or what Belew calls “revolutionary violence” aimed at overthrowing the state. In other words, this “tectonic shift”, according to Belew, meant that after 1983, the movement declared war on the government—the state it had once claimed to serve, albeit extralegally.

Belew is very careful about terminology, avoiding the label “white nationalist”, because “this movement did not seek to defend America”; rather, members “saw the state as their enemy”, which distinguished white power from previous racist movements in the United States. Disseminated through literature and early computer networks, the newly declared war on the state evolved into the unifying vision necessary to consolidate the movement. White power ideology also capitalized on widespread discontent among conservatives, or the anti-statist “thunder on the right” of the Reagan era. With this new central target and a turn toward what they called “leaderless resistance”, which made it difficult to track, defuse, and/or prosecute its participants, the white power movement spread.

The movement peaked in its militia phase in the early ’90s, exemplified by standoffs in Ruby Ridge, Idaho (1992) and Waco, Texas (1993), and it culminated in the Oklahoma City bombing in 1995. From that point on, white power mostly moved to the internet, but this virtual decentralization was not, as recent events indicate, so much a decline as it was a change in context. Indeed, Belew’s research is incredibly timely. When Dylann Roof committed mass murder in Charleston, South Carolina, in the summer of 2015, he was often represented as a troubled, confused teenager. But Belew’s careful tracing of the white power movement indicates that, rather than an incoherent jumble of racist artifacts, Roof’s use of hate symbols called upon a legible history of white power: the Confederate flag, province of the KKK; the Rhodesian flag, a cause celebrated by Louis Beam at his infamous Aryan Nations World Congress appearance in 1983; and “88”, a Hitlerian code used widely by the movement in the ’80s.

Roof’s horrific violence was thus a measure of the successful evolution of the underground movement, and the symbols he used and ideology espoused can be traced directly back to the Vietnam veterans who became the early white power leaders of the late ’70s. “Because of the internet,” Belew writes, “Roof never had to meet another activist to be radicalized by the white power movement, nor to count himself among its foot soldiers.” For those who wish to make sense of the enduring “catastrophic ricochet of the Vietnam War” as well as recent events in places like Charlottesville, Belew’s Bring the War Home is required reading.