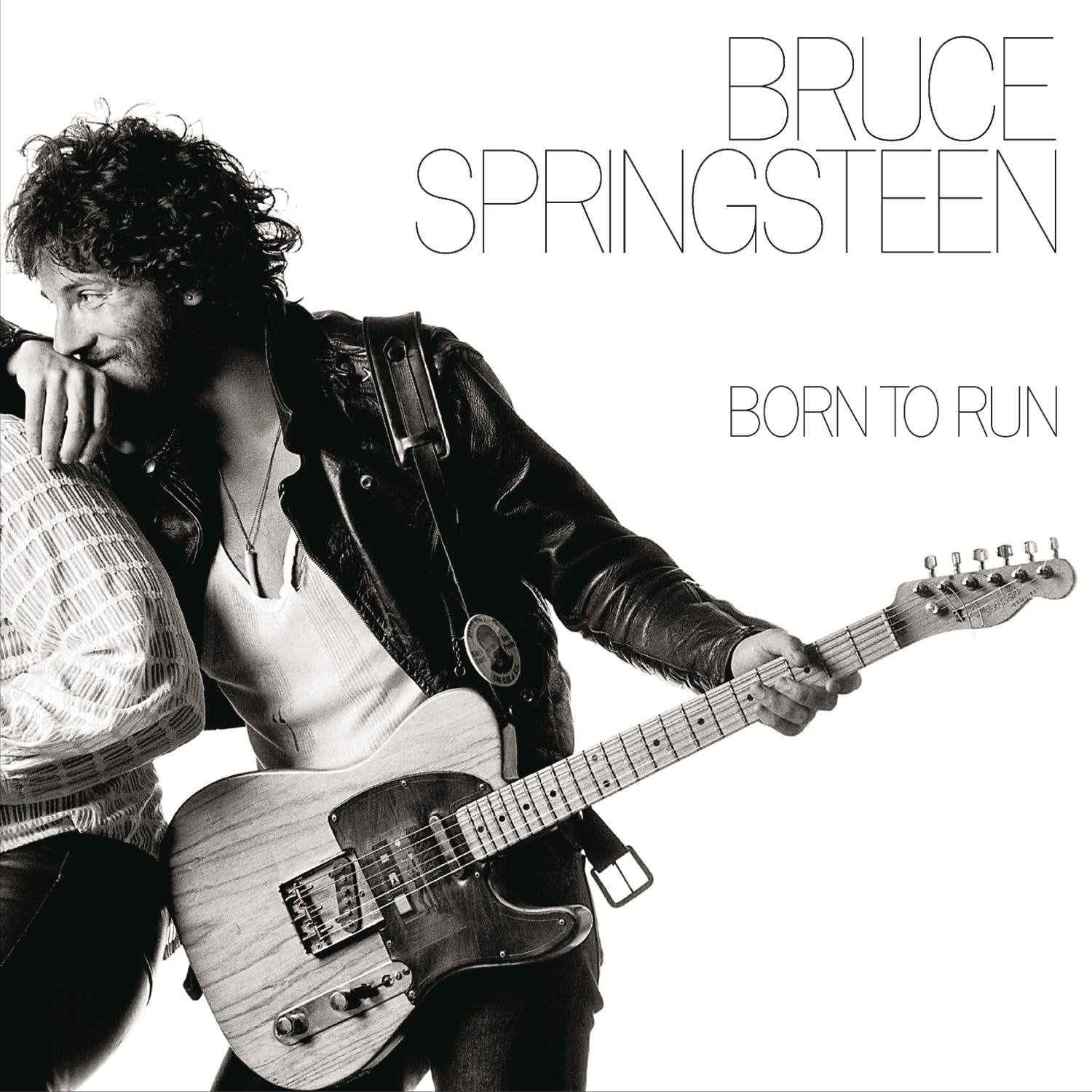 A little over 15 months after music critic Jon Landau declared, “I have seen the future of rock and roll and his name is Bruce Springsteen“, the promise and burden contained in that declaration were manifested in the release of 1975’s Born to Run. Its eight songs are packed dangerously with drama, anguish, and moody young people seeking a way out of their dead-end hometowns (all the while dealing with the drama of the rambling life).

In Springsteen’s world, “maximum lawmen” chase down the Rat through “Jungleland”; Eddie contemplates a fatal trip through the tunnel in “Meeting Across the River”; and Mary stands on the porch of her house in “Thunder Road”, pondering the boy with the guitar and the car out back who tells her “You ain’t a beauty / But hey you’re alright.” There’s also Wendy listening to the hero of “Born to Run” ask her to “wrap her legs ’round these velvet rims / Strap your hands ‘cross this engine.” Meanwhile, in “Backstreets”, Terry is a woman who will stand by her man, “Trying in vain to breathe / The fire we was born in.” They all live in the same steamy, eternal summer New Jersey/New York night. They were the past, present, and future all at once.

The version of Bruce Springsteen that so enamored Landau in 1974 was a 24-year-old cult favorite opening for Bonnie Raitt at the Harvard Square Theater in Cambridge. He had been a Columbia Recording Artist for almost 14 months, a much-touted “New Dylan” who demonstrated an equivalent skill with wordplay in his debut album, 1973’s Greetings From Asbury Park, NJ. The same year, his sophomore release—The Wild, the Innocent & the E Street Shuffle—seemed as much a distillation of Van Morrison circa 1968-1973 as much as Dylan. The heady mix of soul, funk, horn-based rhythm and blues, and singer-songwriter aspirations was both a blessing and curse for Springsteen, as Landau blessed him as “the future of rock and roll” at the crossroads of a decade that would soon usher in disco and punk. Even so, Springsteen soon hired him as his manager and co-producer for Born to Run.

Two months after the release of this landmark album, Springsteen landed on the covers of Time and Newsweek during the same October week. Stars aligned, blessings were bestowed, and the future Landau promised became startlingly fulfilled with an album that seemed anachronistic in its stubborn allegiance to the past. For all of its potential to shine a light on tomorrow, Born to Run is (if anything) a tribute to Bo Diddley riffs (“She’s the One”). It’s a three-act high drama with a legendary Clarence Clemons saxophone solo (“Jungleland”), and a track that sounds like it could have been a lost theme from Martin Scorsese’s Mean Streets.

Nothing about this album was explicitly future-based, but every moment of it pulsed with the promise of tomorrow. Springsteen distilled West Side Story-like motifs (“Kids flash guitars just like switchblades” from “Jungleland”) alongside the solid sense of high drama and intense desperation (“Backstreets”) and made them his own. He was drawing from everybody—Dylan, Roy Orbison, Phil Spector’s “wall of sound”, and King Curtis’s sax sound manifested through bandmate Clarence Clemons—and the results proved to be singularly original.

“Thunder Road” begins with tentative chords being blown on a C key harmonica over a piano prelude trying to find its place. Fifteen seconds in, Springsteen starts his story about Mary (the common name with such grand religious implications) dancing across the porch to the sounds of Roy Orbison’s “Only the Lonely”. We don’t hear that song, but we trust Springsteen as he tells us of this woman’s dreams and the man who will take her away from all this madness, from this “town full of losers”. Springsteen’s Mary isn’t as pure as most; she has a few options. She can hide under her bed and make crosses from her lovers, or she can find redemption under the hood of the singer’s car. Ghosts are in the eyes of all the boys she’s sent away.

It’s as triumphant an opening track as Springsteen probably could have imagined, but the joy is tinged with heartbreak. “It’s a town full of losers / I’m pullin’ out of here to win,” he sings at the end of the album version—and all official versions, in fact—but the original sounded like a triumphant declaration. In a live version performed at London’s Hammersmith Odeon in 1975 (available in the boxed set 30th anniversary release of Born to Run), Springsteen and the E Street Band were already working with ways to push the inner heartbreak from this track to the forefront. It’s amazing how more tragic emotions can be evoked when a harmonica solo substitutes for a saxophone in the song’s coda

Not all the tracks on Born to Run are legendary, though. “Tenth Avenue Freeze-Out” is best known as the origin story of Springsteen’s E-Street Band. It features the key members (newcomers Max Weinberg and Roy Bittan on drums and piano, respectively, plus Garry Tallent on bass), with horn arrangements from co-producer and future E Street stalwart Steven Van Zandt. This one, like a handful of other recordings in Springsteen’s catalog, would be best served in stadium performances as a way to introduce and highlight the band. Next, “Night”—the third track on Side One—doesn’t break any ground that wouldn’t be more meaningfully explored in 1978’s “Something in the Night”. In the days of describing albums and their contained tracks as “all killer, no filler”, these songs don’t age well.

Side One ends with “Backstreets”. Its declarations of lost love are filtered with the type of religious references Springsteen would perfect. These lovers were born in fire, desperate for breath and “tying faith between [their] teeth”. In the song’s bridge, he sings of how “dancers scraped the tears / Up off the streets dressed down in rags.” The outro (a repetition of “Hiding on the backstreets” that lasts a few minutes) is perhaps too long for its own good, but the passion is impressive. Springsteen is spent by the end of Side One. How will he follow this act?

It’s interesting to take this album from beginning to end and note that “Born to Run”, which opens Side Two, is perfectly placed. It’s an opening that would serve as either a finale or encore for years to come, a proud declaration of tramps born to get out of their dead-end situations and head into the unknown world. He explains in his 2016 memoir, Born to Run: “I started out with cliché cliché cliché, and then I caught a piece of myself and the moment: ‘In the day we sweat it out on the streets of a runaway American dream.'” It’s all “death traps”, “suicide raps”, and “highways jammed with broken heroes”. Listening to the studio version now, 45 years later, the passion spent is still there. Every ounce of energy is spent in four and a half minutes, a contained declaration that the hopeless past inherited by Springsteen’s New Jersey heroes would not suppress their aspirations.

As The Atlantic‘s Joshua Zeitz once wrote, “In the opening lines of ‘Born to Run’, Springsteen invoked one of his favorite metaphors—the automobile as an engine of escape from the many dead ends and disappointments that seemed to constrain young, working-class Americans.” This allegiance to the working class would be an easy fit for Springsteen and soon prove a curse, as his fortunes grew and detractors suggested there was no way he could every be fully connected with these characters.

Was it all an act? Springsteen has always been one to wax poetic in concert, perhaps to the detriment of the music itself. Certainly, he found a place for this tendency with Springsteen on Broadway, but that would be over 40 years after Born to Run. Again from the memoir, Springsteen reflects: “At record’s end, our lovers from ‘Thunder Road’ have had their early hard-won optimism severely tested by the streets of my noir city. They’re left in fate’s hands, in a land where ambivalence reigns and tomorrow is unknown.”

The propulsive rhythmic structure of “She’s the One” hides a killer opening line: “With her killer graces and her secret places / That no boy can fill.” In other words, she’ll save you from your bitterness, but you need to act quickly, or else the window of opportunity will slam shut on your fingers. In “Meeting Across the River”, the mood shifts into a gangster noir about needing a car to make a big score that will risk lives but reap a huge payday. Randy Brecker on trumpet and Richard Davis on bass bring this one home. It’s a brief score to a short subject film that we can see every time we play this track.

If “Backstreets” ends with barely contained, obsessive drive, “Jungleland” concludes the album with a grand, well deserved three-act opera. Listen to the way the organ kicks in roughly 90 seconds into its nearly ten-minute running time. It comes right at the end of Act One and the word “churches” in the following phrase: “From the churches to the jails / Tonight all is silence in the world / As we take our stand down in Jungleland.” The characters have been introduced in Act One, in the first two verses, and they play out their roles in the song’s midsection.

Gangs start to assemble in the third verse, and in the bridge that follows, we hear visionaries, backstreet girls, and lonely-hearted lovers mingle in shared spaces, trying desperately to find a purpose. Then, Clarence Clemons comes in with a sax solo that would stay as his performance highlight until his 2011 death. Clemons’ nephew, Jake, took over his uncle’s role in the band, and his debut performance of this solo, contained before the final act of “Jungleland”, is a powerful testimony to the family-like staying power of Springsteen and his E Street Band.

The final act of “Jungleland” contains more drama in its three-and-a-half minutes than most anything else in Springsteen’s catalog. The Magic Rat, introduced much earlier, has been gunned down by his own dream, and “the poet’s down here don’t write nothing at all / They just stand back and let it all be.” The star-making machinery for Springsteen would come in full force by autumn 1975, with feature covers on Time and Newsweek. He would re-capture the American zeitgeist in 1984—via the misinterpreted anthem “Born in the USA”—and take a different direction in the next few decades, with songs evoking John Steinbeck and tributes to Pete Seeger, among other projects.

The strengths of Born to Run can also be seen in its weaknesses. It’s passionate, emotional, dramatic, and extreme; all that Springsteen was up to that point were contained in these songs. He moved on, but he never abandoned the heart of these narratives, and listening to them again is as exhilarating as ever. His heart is on his sleeve, his engine is filled, motor tuned, and the empty highway is filled with limitless possibilities.