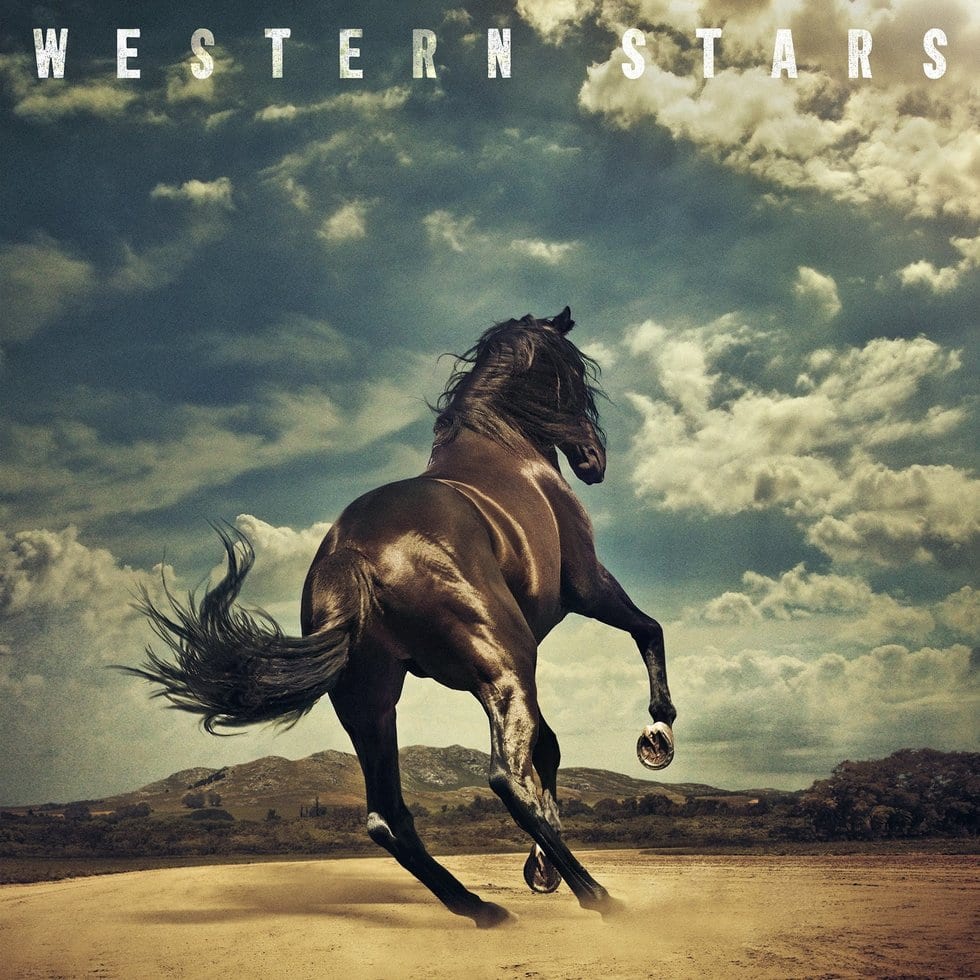 On Western Stars, Bruce Springsteen’s first solo recording in 14 years, the primary influences are the borrowed elements of country, folk, and baroque pop that interlaced in the late 1960s and early 1970s rock. Springsteen has mined these fields before in his solo work, but not in a manner as on this new album, out 14 June.

Here Springsteen features strings and brass that are far more assertive than the kind of discreet and supremely tasteful orchestrations by David Campbell, among others, of the bygone folk-rock period. Springsteen used orchestral strings on prior recordings beginning with his second album, The Wild, the Innocent & the E Street Shuffle (1973), but here the ensemble evokes the bold Americana of Aaron Copland and Richard Rodgers and mid-20th century film-score composers Alfred Newman, Max Steiner, Victor Young, and the like. On the exhilarating “The Wayfarer”, warm horns join a staccato string sextet pushed by Matt Chamberlain’s drums; and the orchestra muscles in after the bridge, nudging the singer to the side. Strings sneak in behind Marc Muller’s pedal-steel guitar in “Chasin’ Wild Horse” and “Drive Fast (The Stuntman)”, then broaden the songs’ cinematic scope to reveal a panoramic vista.

The album’s marriage of traditional folk instrumentation to orchestral music is stated in the opening number “Hitch Hikin'” as a banjo and acoustic guitar played by Springsteen are joined by swelling strings. Springsteen’s familiar chugging acoustic guitar forms the spine of several tracks; his twangy electric guitar peeks out of the mix in “Sundown”; and the gentle folk tunes “Somewhere North of Nashville” and “Chasin’ Wild Horses” are ushered in by his finger- and flat-picking.

Musicians from Springsteen’s circle who contribute include E Street Band regulars Patti Scialfa, who appears as vocalist and vocal arranger, and Charlie Giordano, who provides the accordion on the party tune “Sleepy Joe’s Café”. Springsteen’s reunion with keyboard player David Sancious, a member of the original E Street Band, fails to produce a memorable result, which is a disappointment. But Springsteen and co-producer Ron Aniello allowed other players to shine: Violinist Luis Villalobos and pedal-steel guitarist Marty Rifkin make moving contributions to “Stones” and “Somewhere North of Nashville”, respectively.

Springsteen experiments as a vocalist too. In “There Goes My Miracle” and “Sundown”, he pushes his voice to the top of its range, singing legato from deep in his chest. This bel canto approach is as appealing as it is surprising. The familiar grit in his voice returns in “Somewhere North of Nashville” and “Hello Sunshine”. In the title track, he sings both sweet and ragged, as the lyrics require.

As the core of Western Stars is what defines Springsteen’s body of work: well-crafted songs with an identifiable point of view delivered by finely wrought, sympathetic characters. In the title track, an aging actor downplays his glory days, but recalls that “Once I was shot by John Wayne… that one scene’s bought me a thousand drinks.” The character in “Drive Fast (The Stuntman)” has a beat-up body and memories of an actress he “met on the set of this B picture she made / She liked her guys a little greasy and ‘neath her pay grade.”

Springsteen’s characters lose hard. Self-recrimination haunts the failed songwriter in “Somewhere North of Nashville” who says he “came into town with a pocketful of songs…But I didn’t last long.” He adds, “For the deal I made, the price was strong / I traded you for this song.” In “Chasin’ Wild Horses”, the narrator sings: “I shout your name into a canyon / The echo throws it back.” In “Moonlight Motel”, a man revisits the site where he lost his love and family and finds it “boarded up and gone like an old summer song”. Throughout, Springsteen displays a novelist’s keen eye for detail and metaphor: a rusted chain-link fence, lies that descend like black crows on an open field, two raw eggs and a shot of gin to kick off the morning, slippers tucked under the bed.

Last month, Springsteen told interviewers he would soon be recording and touring again with the E Street Band, news that is bound to please millions but dims the light a bit on Western Stars, an admirable, occasionally thrilling work that deserves full attention of its own. Springsteen’s solo albums – Lucky Town (1992), The Ghost of Tom Joad (1995) and Devils & Dust (2005) – contain some of his best writing; and they seem to have achieved the impossible – improving over the course of time. Similarly, with so much to unpack, Western Stars grows more satisfying with repeated exposure. Deeply moving, inventive and even a bit risky, Western Stars will take its place among Springsteen’s solo gems.