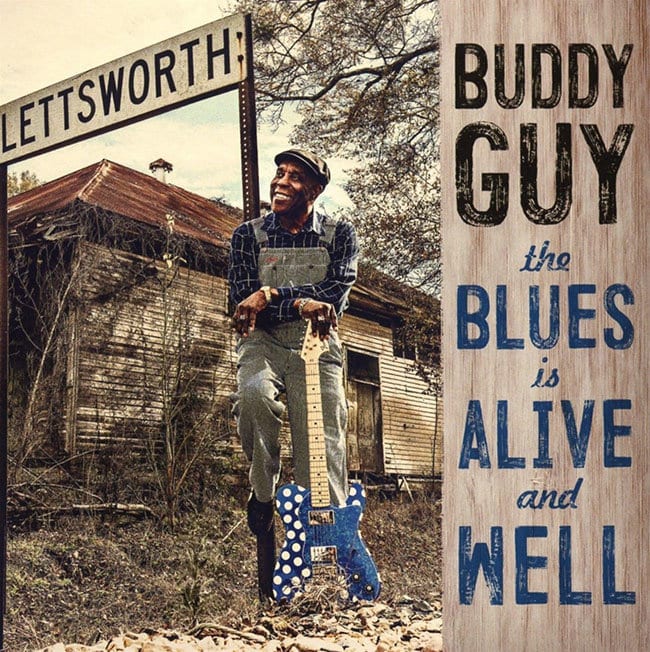 The Blues Is Alive and Well
Buddy Guy
Silvertone

With the passing of B.B. King in 2015, Buddy Guy stands as a final bastion of the original blues circle of the mid-20th century. Although he has a reputation as one of the best guitarist in the world, and even though he has watched his and his friends’ music get repurposed by British musicians and “introduced” to America, Guy has grown neither bitter nor egocentric. In his recent work The Blues Is Alive and Well, Guy turns his gaze both back on his legendary career and forwards towards his inevitable death in a frequently moving piece of work.

Old enough to have seen the rise and fall of blues based rock ‘n’ roll, Guy’s optimism has clearly survived intact and is on display on much of this album. A longtime idol of many of the British, blues-based rock guitarists, it is a treat to hear them play with Guy on this record. “Cognac” features Rolling Stones’ guitarist Keith Richards’ swaggering tones and Jeff Beck’s jittering, skittering solos around a classic blues melody. You can hear their admiration, especially Beck’s who, according to Guy, always tells of a time he slept in his van to see him play in England. Other guests on the album include fellow Stone Mick Jagger on “You Did the Crime” and a surprisingly moving James Bay in “Blue No More”.

However, perhaps the most prevalent theme on this album is Guy’s fascination with mortality. The album opens with “A Few Good Years”, slide guitar crying along with Buddy’s melancholy soloing while he sings of hope for more time: “A few good years / Is all I need right now / Please, please Lord / Send a few good years on down.” It’s a lonesome and powerful chorus that is reminiscent of the lyrics of gloomy blues of the Old South. Guy takes a similar route on a handful of other tracks as well, praising his angels in “Somebody Up There” and crying over the inevitability of his departing train in “When My Day Comes”.

Despite this cool introspection, Guy sounds full of life on much of this album as well. Benefited by the Muscle Shoals Horns, many of these songs pop with a brassy vigor such as the album’s title track and “Old Fashioned”. Similarly, “End of the Line” finds Guy letting loose on the guitar, treading into the experimental territory that his solos often go during his unique live shows. However, the final track, “Milking Muther for Ya”, stripped of the theatrics and amplification is a quiet reminder that Buddy Guy is still at heart a straight-up bluesman.

With its crowded track list and extended runtime, this album does not necessarily come off as an essential album in Guy’s oeuvre. However, there are some strong tracks in here, and it is worth a listen for any blues aficionado. And although the age of rock ‘n’ roll may have passed from the public eye, listening to this album certainly makes a strong case for the blues’ continuing relevancy. The important fact is that Buddy Guy seems to believe that they are and as long as his band fires up a song and he rips into a solo with the warmth of cognac in his veins, I am inclined to believe him.