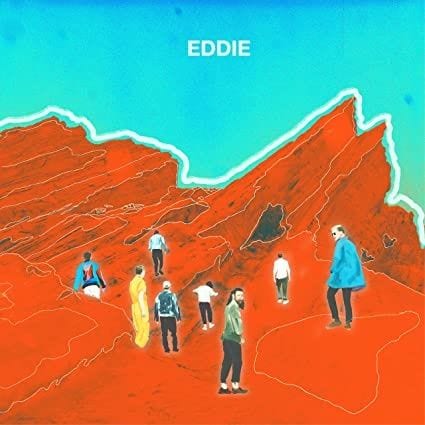 There’s something undeniably sexy about the Montreal-based eight-piece collective Busty and the Bass‘ latest release, Eddie. The overall vibe is that of a basement make-out party with dim lights, smoke-filled air, and a pile of R&B based rock, funk and soul 45s endlessly dropping down on the automatic record changer. The album should be played at a lower volume than most.

There’s also something purposely retro about the sound as the album’s stated purpose is “to answer the questions ‘What advice would you impart on that younger self? And if you could pass your younger self a mixtape, what would it sound like?'” To successfully reach one’s past self, one would need to use the music of one’s youth, and to be convincing, one would have to balance that with the imprint of the present. The trade-off between these two elements keeps things fresh.

Eddie doesn’t quite work as a concept album. The connections between the songs and their thematic developments are too diffuse. Instead, the record works best as a collection of singles that bear a similar sound that overrides their distinctive tropes. Or as vocalist/saxman Nick Ferraro explains, “Think of it as a mixtape.” Some cuts, such as the sultry “Time Don’t Make Me a Stranger”, evoke the urban contemporary music of the 1970s and 1980s. Other tracks, like the gospel-tinged “Summer”, utilize more spiritual trappings such as a solo piano and a clapping of hands to suggest a connection to something higher than the flesh-based pleasures.

Part of the reason for the diverse sounds on the album has to do with the sheer size of the band, who originally met at as students in the jazz program at McGill University. Busty and the Bass are Nick Ferraro (vocals, alto sax), Evan Crofton aka Alistair Blu (vocals, keys, synths), Scott Bevins (trumpet), Chris Vincent (trombone), Louis Stein (guitar), Milo Johnson (bass), Eric Haynes (keys, piano), Julian Trivers (drums). Neal Pogue produced the album (Tyler The Creator, Outkast, Anderson .Paak) with executive producer by Earth, Wind & Fire’s bassist Verdine White. In fact, in many ways, Eddie sounds like a lost Earth, Wind & Fire album in terms of how the horns contribute to the lush arrangements and the vocals layered softly across each other, especially on the more atmospheric tunes such as “Clouds”.

Two tracks feature notable guest vocalists whose musical influence on Busty and the Bass rings clear. The album beings with “Out of Love”, featuring the raspy voice of Macy Gray soulfully rapping hook-laden declarations of independence and strength laced with the pain of a love lost. Parliament/Funkadelic founder George Clinton lays down a funky contribution praising the pusher on “Baggy-Eyed Dope Man”. The band allow these artists with long histories and distinctive styles to fit right in the larger mix without distracting from the album as a whole by providing solid foundations for their intonations.

That said, the best songs such as the bouncy “Kids” work because they are most uplifting. The chorus of “the kids will be alright” optimistically suggests that things have a way of working out. The same is true for the horn-laden “Figure It Out” that declares the positive benefits of taking control of one’s destiny. The theme of the title song is “life gets better”. As a whole, the dozen songs are more hopeful than sad, but the album’s contents are full of mixed emotions, presumably like the title character himself. As Eddie learns, life goes on.