Can You Ever Forgive Me?
Marielle Heller
Fox Searchlight

Some people are just better at being other people than being themselves. Can You Ever Forgive Me? is the entertaining new film about disgraced American writer Lee Israel, who famously turned to literary forgeries when her writing gigs dried up. Though director Marielle Heller clearly has a soft spot for her subject, she holds nothing back in Israel’s portrayal as an alcoholic reprobate whose personality was just as foul as her language. Anchored by a revelatory performance from Melissa McCarthy, Can You Ever Forgive Me? is a witty, observant journey into the mind of a desperate writer.

‘Writing while old’ is considered a federal offense, of sorts, in the publishing community. For Leonore Carol “Lee” Israel (McCarthy), that was the least of her crimes. As a biographer for female celebrities such as Katharine Hepburn (Esquire, 1967), Tallulah Bankhead (Miss Tullalah Bankhead, Putnam, 1972), and Estée Lauder (Estee Lauder : Beyond the Magic (An Unauhorized Biography, (Macmillan, 1985), she came perilously close to success, even landing on The New York Times bestseller list with Kilgallen: A Biography of Dorothy Kilgallen (Dell, 1980). It’s 1991 when the film opens, and the 51-year-old Lee hasn’t had a writing job in years. Even her agent (a brilliantly acidic Jane Curtin) advises her to find a different line of work.

“You can be an asshole when you’re famous,” she tells Lee, who is renowned in literary circles for being… formidable. Lee is also renowned for being drunk by 4PM, which makes it extremely difficult to hold down an ‘honest job’. She can’t even afford medication for her only friend in the world, a geriatric cat that uses the crawlspace under Lee’s bed as a litter box.

When Lee is at her lowest, fate intervenes to make matters even worse. Not only does she grudgingly befriend a charming shyster named Jack Hock (Richard E. Grant), she discovers a personal letter tucked away in the memoirs of a once-famous actress. When the letter fetches a modest sum from a local bookseller named Anna (Dolly Wells), Lee has an idea:

why not fake the personal letters of dead writers and actors and then sell them to vendors for big bucks? What could possibly go wrong?

What makes Can You Ever Forgive Me? such a delight is how skillfully director Marielle Heller (The Diary of a Teenage Girl, 2015) balances the larceny with the personal drama. By the time Lee is buying multiple typewriters to match specific typefaces, we’re already complicit in her scheme. Her grumpy nature makes her an irresistible heroine, freeing you to laugh at things that are decidedly unfunny. Okay, Lee impersonating Nora Ephron in prank calls to her agent is funny (though the real Ephron didn’t think so, as she filed a cease-and-desist order against Lee), but profiteering off the legacies of dead people, not so endearing. 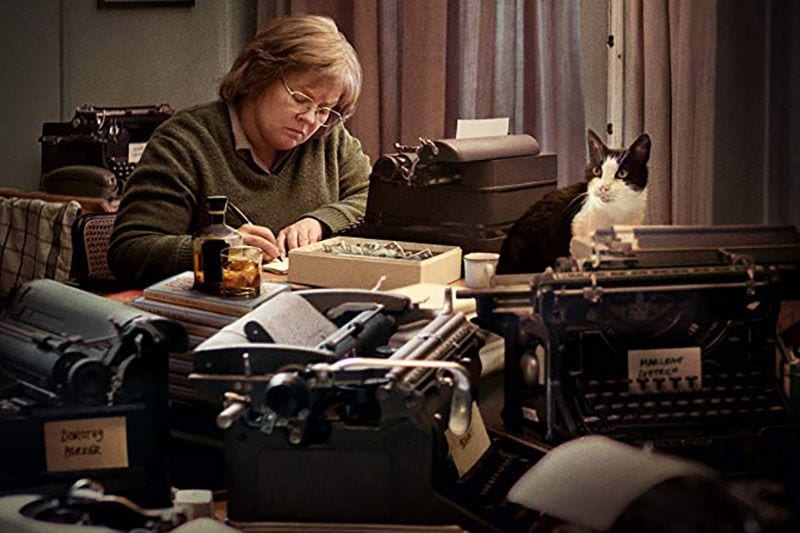 Particularly effective is the awkward relationship between Lee and Jack. It’s not a stretch to say that Jack is interesting enough to carry an entire movie on his own. A flamboyant Englishman with “sexy blue eyes”, Jack’s current address belongs to whichever man he’s sleeping with. The mischievous twinkle in Jack’s eye is the perfect foil for Lee’s permanent scowl. Together they form a most unlikely but utterly convincing partnership based on mutual distrust, booze and loneliness. When Lee invites Jack along on her scam, you just know it will lead to her undoing.

Despite the generally lighthearted approach to Lee’s sordid escapades, there’s a deep undercurrent of sadness to this character. Everyone acknowledges that she’s a gifted writer, but much like Llewyn Davis (from Inside Llewyn Davis), that talent resides in a toxic package. You can practically see the toxins seeping from Lee’s former girlfriend when she admits, “I don’t have the energy to talk you off the ledge anymore.” Lee becomes a tragic figure, doomed to alienate those who care about her (including a clearly smitten Anna) and squander the writing skills that could help her connect with the outside world.

Ironically, Lee’s exemplary excellent forgery skills finally provide her with a weird sense of pride and legitimacy. “I’m a better Dorothy Parker than Dorothy Parker,” she boasts after selling several Parker forgeries. Consumed by self-hatred and doubt, Lee is free to express herself while cloaked in the shadows of others. These intimate letters are more than mere forgeries; they are Lee’s emotional conduit to humankind. Alone, childless, and penniless, Lee fills her emptiness with the words of those more capable of experiencing life and connectedness. 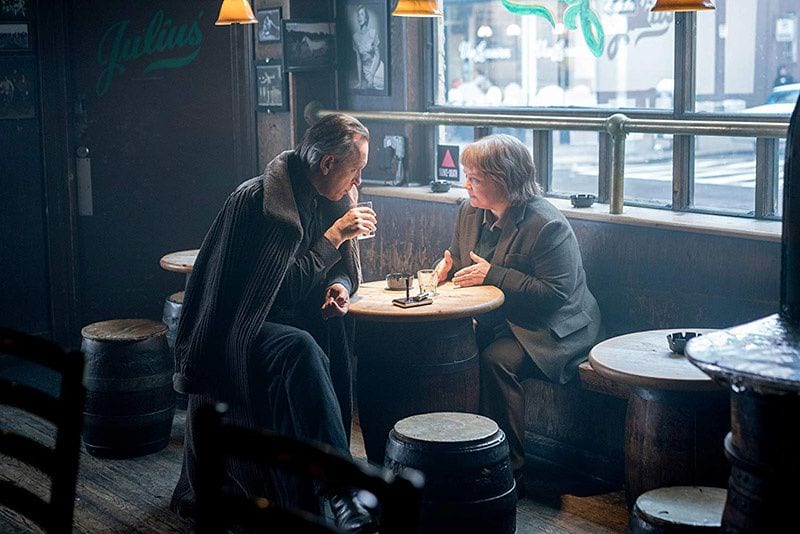 Most actresses would struggle to make Lee’s foibles and felonies feel almost heroic, but it’s a roll McCarthy was born to play. Imminently likeable despite a serious lack of couth, McCarthy feels genuine in her role. You understand that her petulant façade might crumble at any moment, but you keep your distance, just in case it doesn’t. McCarthy flashes every color here, which should certainly garner some attention come awards season.

McCarthy’s performance notwithstanding, Can You Ever Forgive Me? is a modest film. It’s not a splashy Oscar contender with lots of character epiphanies and dramatic speeches. It’s a small story about awful people doing reprehensible things. It’s also effortlessly entertaining. You’ll be surprised how much you care about Lee as you watch her downward spiral. Just be careful that she doesn’t steal your wallet as she’s dragging you down with her.