Film critic Pauline Kael once declared cattily that the only flair in Candice Bergen‘s acting work is in her “nostrils”. For over 50 years, Candice Bergen was a movie star, though for much of it, she was cast in ill-fitting parts, thereby damning her film career as flimsy and insubstantial. In films like Sidney Lumet‘s The Group (1966) or Ralph Nelson‘s Soldier Blue (1970), Bergen struggled as a leading lady, her discomfort with the roles led her acting to be stiff and unconvincing. Her chiseled, model-good looks, however, convinced many casting directors that she would be a convincing lead. It seems Bergen is a character actress born in a leading lady’s body.

For her performance as Roberta in Steven Soderbergh‘s 2020 comedy, Let Them All Talk (currently streaming on HBO), critic Leah Greenblatt has proclaimed Bergen’s work one of the best performances of 2020, declaring that Bergen “manages to steal nearly every scene she has,” noting that her co-stars are respected pros Dianne Wiest (as Susan) and Meryl Streep (as Alice). Critic/author Jeremy Smith also praised Bergen’s performance in the film, writing that she “owns every scene with the confidence of a superstar who’s thrilled to have material worthy of her talent again.”

So Bergen is enjoying a sort-of career renaissance. But for those of us who followed her films, from those questionable b-movies in the ’70s to her good-natured appearances on Saturday Night Live, to her powerhouse turn as the titular character in Diane English’s series, Murphy Brown in the ’80s and ’90s, to her second act as Shirley Schmidt on David E. Kelley‘s series Boston Legal, to her return to cinema after a lengthy absence that started with a flinty turn as Kathy Morningside in Donald Petrie‘s Miss Congeniality (2000), we knew that Bergen is a funny comedienne who rarely got the roles that suited her talents when she was in her youthful bloom.

Let Them All Talk is netting Bergen some of the best reviews of her film career, but it’s worth noting that she has been quietly putting in some sterling work in the past decade or so. Since Miss Congeniality, her filmography is admittedly almost as spotty as her ’70s film work. Casting directors typecast her in a series of comedies playing a variation of the ornery shrew. In most of the films, she’s the antagonist, acting as a foil for the cute, pert heroines of the middling rom-coms, whether it’s Sandra Bullock as Gracie Hart in Miss Congeniality or Reese Witherspoon as Melanie Smooter in Andy Tennant‘s Sweet Home Alabama (2002). Bergen’s roles in these assembly-line comedies seem to be reductive variants of Murphy Brown – clenched jaw, suspicious squint, tendons bulging from her neck.

But we should look beyond the box-office bait and see her quiet, poignant cameo in Noah Baumbach‘s insightful dramedy, 2017’s The Meyerowitz Stories. The film’s stars, Adam Sandler, Ben Stiller, Dustin Hoffman, and Emma Thompson, garnered expected praise for their work. But watch Bergen’s single scene. As Julie, Bergen plays the ex-wife of Hoffman’s character and mother to Sandler’s. When the two visit her well-appointed flat – it’s elegant simplicity is reflected by Bergen herself – the men share a brief visit with her. They must leave, but Julia stops them, slightly hesitant before revealing long regrets over her shoddiness as a stepmother to Hoffman’s other children. Bergen goes through the monologue, ruminating over how she was neglectful and indifferent, her beautiful weathered face is tight, compressed as if trying to keep her guilt at bay. It’s a devastating moment that Bergen dominates.

If The Meyerowitz Stories is a quiet reminder of the underused skills of this resourceful actress, one only need look at Bill Holderman’s 2018 film, Book Club to see how good she can be if given a chance and a role that plays to her strengths. Book Club is not a great film, far from it, but it’s a fun vehicle for Bergen and her co-stars Jane Fonda, Diane Keaton, and Mary Steenburgen. The film was a hit, and Bergen was declared Best Actress by many critics, most of whom had forgotten about her because she is so identified with television. Book Club is an ensemble piece, and each of the award-winning stars has a plum scene to show off. Bergen is hilarious, as she’s allowed to throw off tart one-liners in her patented snide delivery. She’s also granted a chance to show off her physical comedy skills, slapstick she only got to show off during her years on Murphy Brown.

Like every great comedienne, the most important element of Bergen’s performance is her lack of vanity. Yes, she’s a former supermodel, but she’s happy to make herself look ridiculous for a laugh. When trolling for men on dating sites in Book Club, Bergen’s famous visage is covered in an avocado-green facemask, her hair pulled back with a cheap headband. A bit of a computer ignoramus, as she builds her online profile, the laptop’s camera suddenly takes her picture, as she reacts in horror, her online profile doomed with a shot of her mouth agape in midscream, a guacamole-colored green smeared on her face.

In another scene, Bergen’s character braves an L.A. lingerie boutique. She emerges from a fitting room with a pair of SPANX twisted and contorted on her body like a shrunken straight jacket. “I look like a Lane Bryant mannequin,” she grouses. In the film, Bergen’s job is that of comic relief – to be salty and dry and to roll her eyes and express disapproval in a way that no one else can.

So in view of her strong performances in The Meyerowitz Stories and Book Club, as well as her majestic embodiment of the titular character in Murphy Brown, it’s no surprise to anyone who’s paying attention that Bergen would be anything but brilliant as the embittered and resentful Roberta in Soderberg’s Let Them All Talk. In this film, Bergen’s Roberta is a woman whose life takes a turn that leaves her angry and envious. She places – actually she dumps – her troubles at the feet of her estranged friend, Pulitzer Prize-winning author, Alice Hughes (Meryl Streep), who took the story of Roberta’s life and spun it into a hit novel. Throughout the film, Roberta pulls a Gentlemen Prefer Blondes-like character and stalks every corner of the Queen Mary 2, hoping to snag herself a rich millionaire to rescue her from her dead-end retail job.

Roberta shares some commonalities with Bergen’s better roles – she excels when the women she’s playing are prickly and somewhat unpleasant. In his enthusiastic endorsement of her performance, critic Peter Travers writes that Bergen “can look at someone like she wants to kill them and make you crave, actually envision her hands around their necks.”

It may be this quality that ultimately makes Bergen somewhat difficult to cast. In a mediocre script, this tart, slightly dangerous quality can come off as shrewish and one-note. In a good script, it can be engaging, funny, and intriguing. On Murphy Brown, she was refreshingly unlikable – funny because she wasn’t concerned about being attractive or accommodating to others, especially men. She won five Emmys for this 11-season role, irrevocably fusing her screen persona with that of Murphy Brown’s. That character – its irascible, irritating personality – melded with Bergen’s innate dry-as-a-bone comedic timing.

As seen in Let Them All Talk, however, Bergen is a far more resourceful actress than she’s given credit for. She’s getting some Oscar buzz for the role (she was nominated in 1980 for – what else? – an uproarious comedic turn in Alan J. Pakula’s 1979 fim, Starting Over) and a renewed respect and appreciation from filmgoers and critics. Here’s hoping this upswell of critical acclaim will get her that (overdue) Oscar nomination — and more film roles. 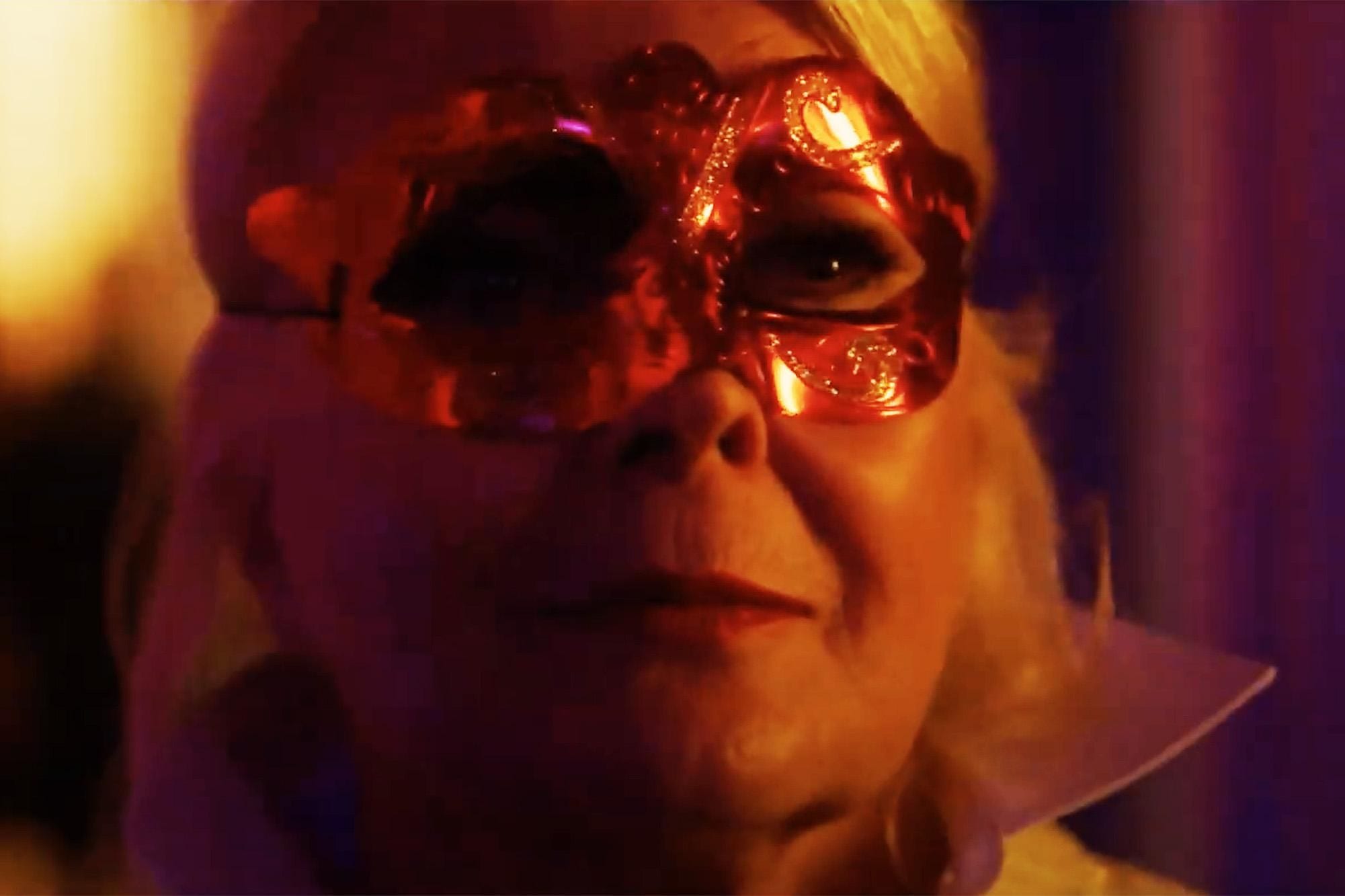 (Let Them All Talk trailer screengrab)