In 2020, acclaimed Chinese artist Cao Fei will exhibit her work at a retrospective at the Ullens Center for Contemporary Art (UCCA) in Beijing. Cao Fei’s work has been celebrated internationally as a provocative depiction of the urbanization and industrial revolution in China. Using multiple media, Fei unpacks the contradictions weaved into modern China.

Cao Fei grew up Guangzhou in the Pearl River Delta in Southern China known today as the “Factory of the World”. The region’s GDP in 2017 was $1.2 trillion — with only the US and Germany topping those numbers (“China’s Crown Jewel: The Pearl River Delta”, Ed Fuller, Forbes 7 Oct 2017). Indeed, Cao Fei has witnessed drastic changes in her country first-hand, and her artwork showcases the dialectic relationship between progress and production in the People’s Republic of China.

For over a decade, Cao Fei has presented the contradictions of economic success in her homeland. Her break-out contemporary film
Whose Utopia? (2006) is set in a Chinese light bulb factory. The monotonous machines, workers, and products are juxtaposed by the dissonant music that moans in the background. Broken into three parts, the film shows the detailed precision of the machines creating a product and how the workers’ movements are just as robotic and automated. In “Part Two: Factory Fairytale”, several workers embrace their imaginations as they dance between skids or play guitar among workers who are oblivious to them. To conclude the film, the music’s tone becomes more upbeat, employees stare at the camera, silently protesting, and finally, the workers proclaim “my future is not a dream.” (See stills from the film on the Tate website.)

Cao Fei visited the OSRAM China Lighting factory in Foshan, China, once a week for six months to create this short film. During that time, she got to know the workers at the factory by using a questionnaire to select employees of interest. Then, she organized small groups that took part in artistic workshops. As a result of the workers’ creative practice, Cao Fei focused her film on the complex existence of industrial work in contrast to the contemplative utopias of the factory employees.

While Whose Utopia? brought to light the dulling occupations of typical Chinese, it is clear the shiny dreams that occupy their thoughts during the day cannot light a path of escape from industrialization. In the Tate Museum description of her film’s exhibition, Fei says that, “What this project does is release the workers from a standardised notion of productivity. What we are doing is production, but a type of production that connects back to the personal. I am like a social worker. They don’t regard me as an artist.”

She is celebrated in her native land and globally because, as the New York Times suggests, she is a woman who has “risen to prominence at a young age in her field…among women artists…who have often been overlooked, or recognized only belatedly, in a field dominated by men”. (“Shining a Light on Chinese Workers” Farah Nayeri, New York Times, 8 Mar 2019)

Because of Cao Fei’s numerous accolades, she is accepted the face of “cultural revolution” in China. But how does her art contribute to China’s popular culture? Does it voice the valid concerns of Chinese people living in a world that favors profit over fair wages, production over choking pollution? Or does her contemporary take on China’s new reality simply provide a fantasy to the powerless masses?

Whose Utopia? is part of the collection at New York’s Guggenheim. While Whose Utopia? exhibits as modernism—new art, from a new artist, with a new interpretation—it functions as mass culture repressing the concerns of Chinese workers with temporary fantasies just provocative enough to entertain without making much of a statement about its serious societal anxieties.

Why does not Cao Fei make a stronger statement with her art? What is she holding back?

To be a respected artist in China, it does not pay to be political. In Lisa Lowe and David Lloyd’s introduction to The Politics of Culture in the Shadow of Late Capital (Duke University Press, 1997), they suggest that culture cannot be independent from the influence of politics and economics; but rather those three forces (culture-politics-economics) form to become an “inseparable dynamic”. Although contemporary art is a cultural opportunity to showcase alternative points of view, the influence of politics and economics in the art world harm Cao Fei’s image as an international cultural icon.

Politically speaking, it is well known that China employs censorship in many forms. While Cao Fei’s works of contemporary art are respected and admired by Chinese elite, many other international artists have been censored. Last December, just days before an international contemporary art show at the Guangdong Museum of Art in China, several artists’ works were pulled from the exhibit because of “incompatibility with the Guangdong people’s taste and cultural habits”. In response to the government’s censorship, some artists wondered: “Is it just a misleading marketing tool to fool the rest of the world and show there is no room for critical contemporary art in China?” (“Their Art Raised Questions About Technology“, Amy Quin New York Times, 14 Dec 2018) 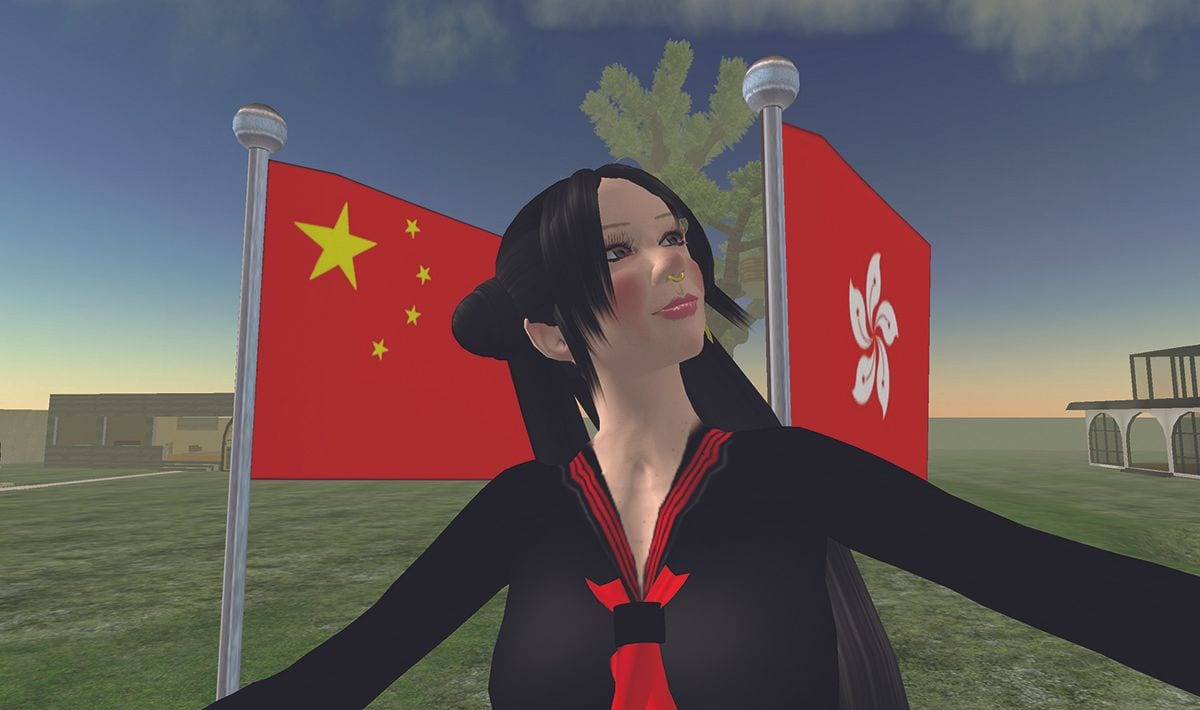 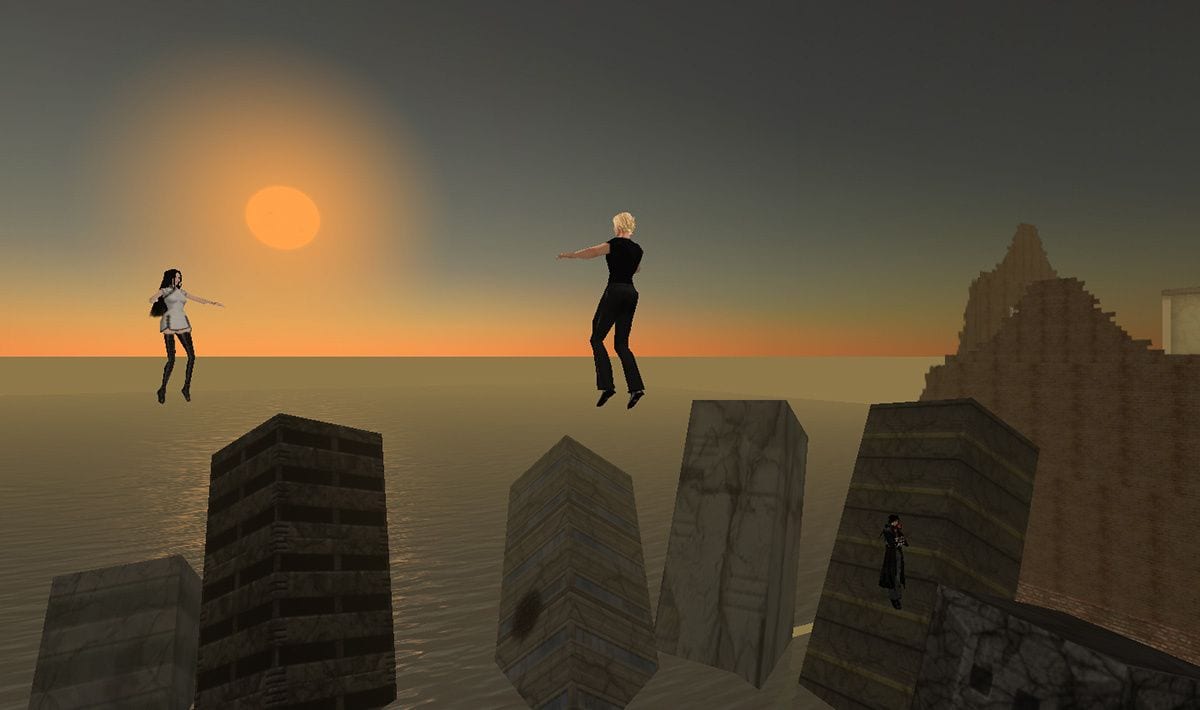 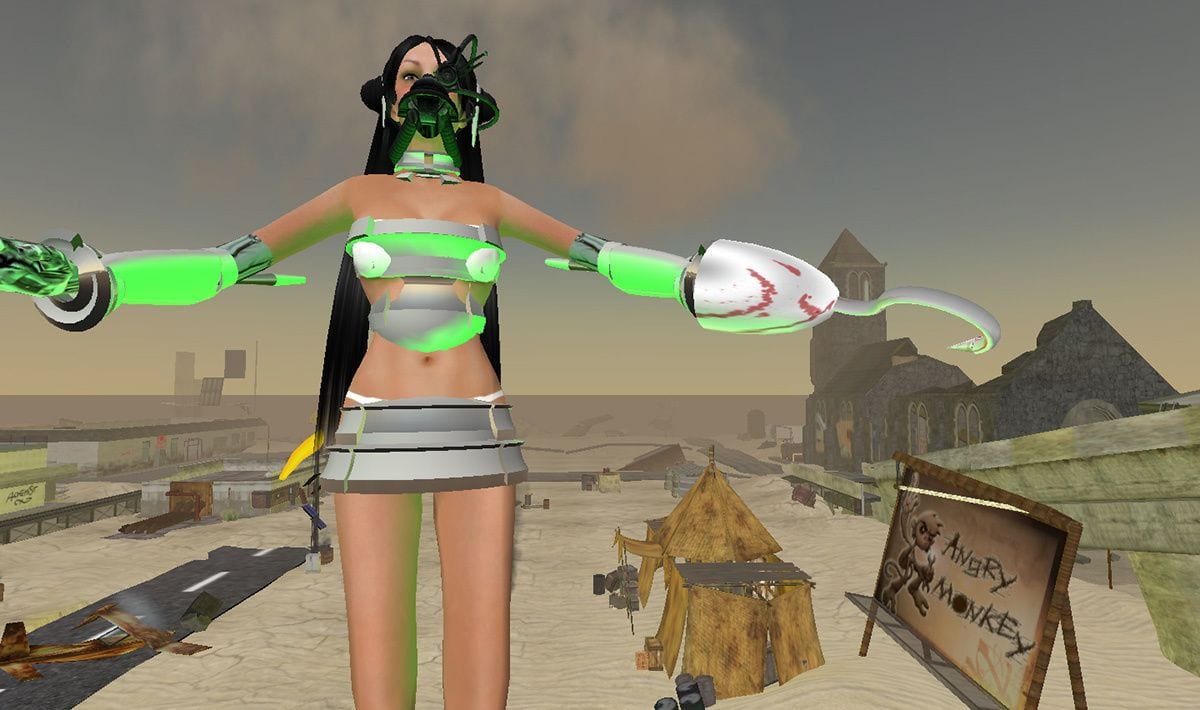 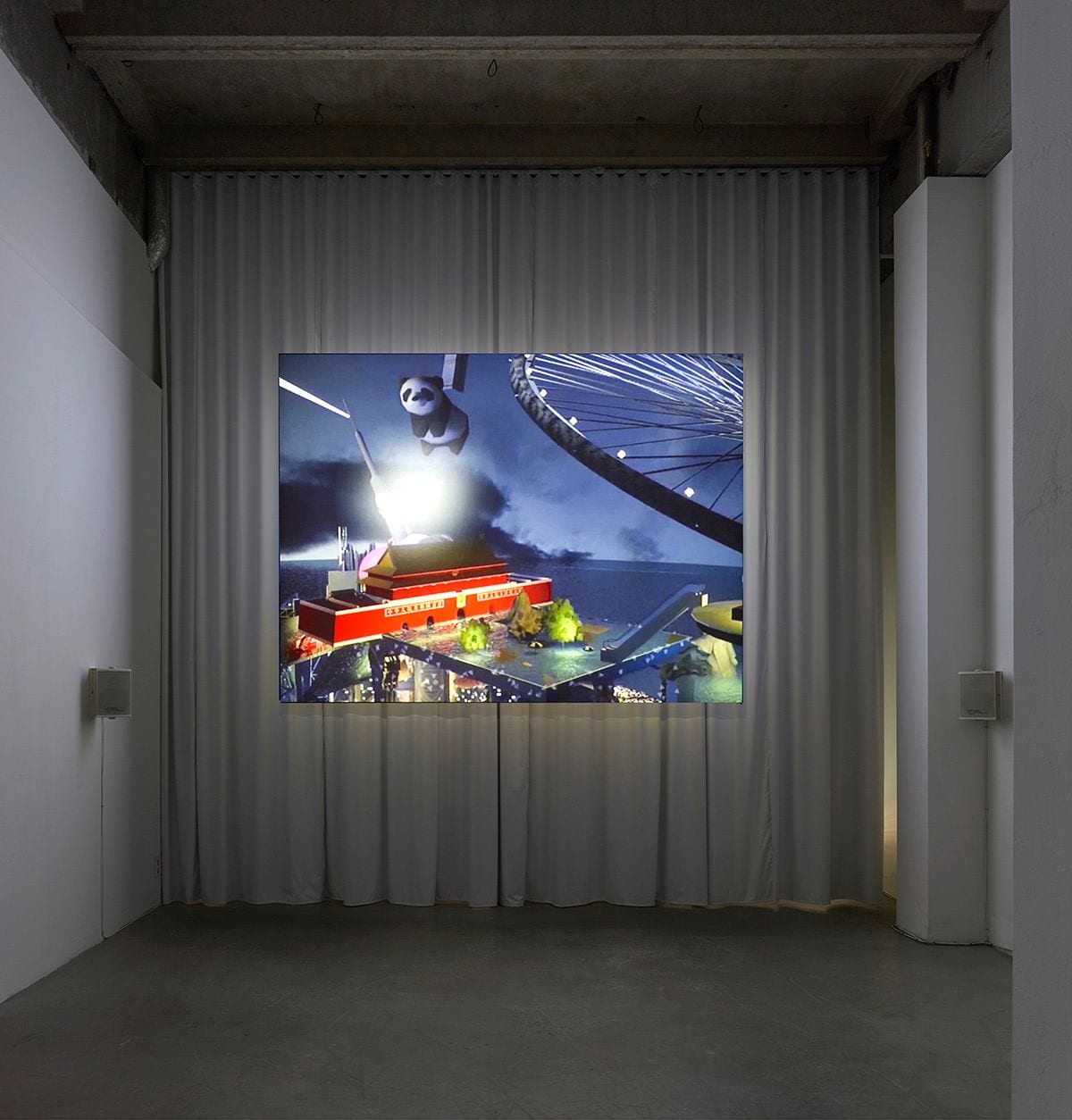 The market for critical art in China is shrinking. While earlier Chinese artists like Xu Bing, Zhang Xiaogang, and Yue Minjun created political statements with their artwork, it was mostly in response to the propaganda being pumped from the unsuccessful and oppressive Mao government. Since President Xi Jinping was elected, censorship has gotten more aggressive (artist Ai Weiwei suffered a head injury from the Chinese police after he created a critical work about the government). Caving in to political pressure, today’s contemporary artists prefer to make interpretations without critiques. And, there is no money in political art–many wealthy Chinese buyers have no desire to own controversial art; they are too afraid to buy it (“Why Young Chinese Artists Are Avoiding Political Art“, Alec Ash, The Atlantic, 26 Jul 2018)

Producing art in a politically-charged environment is something with which Cao Fei is familiar. Her father — a prominent Chinese sculptor — specialized in portraits of politicians and official figures of the Chinese government. Cao Chong’s “learned to do what he was told and make whatever the Communist Party required” (“As China Evolves, the Artist Cao Fei Is Watching“, Barbara Pollack, New York Times, 1 Apr 2016). Perhaps Cao Fei heeds her father’s warning. Her artwork builds a compelling fantasy but does not condemn why the fantasy is necessary.

While there seems to be no upside to producing controversial political art in China today, economic influences are also at play. In recent years, Cao Fei has signed on with Prada to work on the advertising for their Men’s 2019 fashion line, and she was tapped to create the BMW #18 Art Car. While those mass market appeals help Cao Fei gain international exposure, it is her commission for her seminal piece, Whose Etopia? that calls her artistic integrity into question.

Fei’s film, Whose Utopia?, was sponsored by the Siemens Art Program. Siemens is a global company, the largest European manufacturing conglomerate based in Germany. They are known for their advances in sustainability and mitigating climate change. However, they are also well-known for other reasons. To win international contracts, Siemens offered bribes as part of their normal business operations. After being prosecuted for several bribery scandals, Siemens negotiated a legal settlement of $1.6 billion with American and European governments (Watson). Siemens is also infamous for their use of slave labor during World War II. To stave off potential court settlements, Siemens set up a $12 million fund for families impacted by the forced labor. Although the solution seems charitable, it was rumored to be the cheapest alternative available. (“Siemens and the battle against bribery and corruption“, Bruce Watson, The Guardian, 18 Sep. 2013. “Siemens Offers $12 Million to WWII Slave Labor Victims“, AP, Los Angeles Times, 24 Sep 1998)

The mission of the art program at Siemens states, “we seek subjects and artistic positions that address challenges in society today and explore emerging future issues.” While it’s commendable that Siemens sponsors artistic creativity, it is hard to say whether or not Siemen’s influence overshadows the artistic work it commissions. If Cao Fei’s film is paid for by Siemens—where they make generate a revenue of €8.1 billion and employ 33,000 employees in China (Siemen’s website) —are the factory workers getting a chance to speak, or does the corporate sponsorship get the last word?

When Cao Fei was asked about the negative aspects of factory work, her response sounded like something which Siemens would approve: In an interview with New York Times writer Farah Nayeri, Fei says, “I don’t think [factory life] a nightmare…[Workers] understand that they have to endure difficult living conditions (“Their Art Raised Questions...” ibid). In China, it’s normal”. She goes on to say that the daily sacrifice is worth it because China is a strong global power and “all these international companies want to come to China”. Perhaps the factory workers have a different point of view.

Cao Fei’s lens into industrial China is not the only perspective out there. Lixin Fan’s documentary, Last Train Home (2011), chronicles the trek of one family who migrated from their home village to the city for decades, leaving behind their two infant daughters while they worked for their family. (See: ‘Last Train Home’: A Sad Place, Cynthia Fuchs, PopMatters, 6 Sep 2010.) One daughter grows up to be very angry and resentful for her parents’ absence — the rift in their relationship seems beyond repair. China’s global industrial progress broke this family in two.

In 2017, White Pine Press published a book of poetry entitled Iron Moon: An Anthology of Chinese Worker Poetry. Translated by Eleanor Goodman, the poems critique, attack, and expose the realities of Chinese migrant factory workers. Their words — not censored through an industry-backed production — express the realities of the new booming China. In the poem “A Screw Plunges to the Ground”, poet Xu Lizhi‘s uses the symbolism of the screw to foreshadow a worker’s suicide from the roof of the Foxconn Factory where there was a wave of suicides in 2010 and 2011 from factories where Apple products are manufactured. (“Suicide at Chinese iPhone factory reignites concern over working conditions”, Jamie Fullerton, The Telegraph, 7 Jan 2018) Other themes of mechanization, exploitation, injury, and homesickness reappear throughout the anthology producing images of factory life that are far darker than Cao Fei’s Whose Etopia?

While Cao Fei’s artwork presents the dialectical relationship between China and industrialization, works like Last Train Home and Iron Moon voice the realistic impact that globalization has on the people of China. Cao Fei may have all the privileges that come with world-wide cultural celebrity, but her works of art mostly distract the audience from the pain of production because of the overwhelming influence of power and profits.