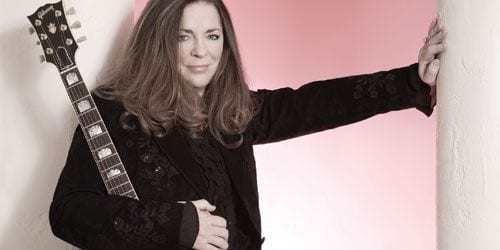 The album title says it best. Carlene Carter’s musicianship is stronger than ever. She’s written a bunch of potent new songs, co-wrote another, plucked a couple of self-penned oldies out of her bag, and compellingly performs them all with a passionate bravado. Carter’s always been tough and edgy, but now she seems self-confident. “I’m so cool,” she sings with a growl some 25-plus years after she first wrote the tune, and you believe her.

Maybe there are good psychological reasons for this. In one year she suffered four grievous losses, which are directly and indirectly alluded to on the record. You don’t have to be Sigmund Freud to understand a person goes through some sort of spiritual liberation when her mate, mother, stepfather, and little sister die. And imagine how this is intensely compounded by the fact that her mother and stepfather were the musical legends June Carter Cash and Johnny Cash, whose gifts and story are well known throughout the world. That’s a leaden load for anyone to bear.

But this is not a concept record or even a heavy one. Although Carter offers hard won life lessons — “Hold for your life/until it comes judgment day/true love doesn’t die/it just walks away,” she sings with conviction — this is largely an upbeat record. That which has not killed her has made her stronger. Carter celebrates the fact that life goes on. Indeed, her strength is often astounding: “Why Be Blue”, she asks on a song by that name, and she knows one has to capture joy when possible. Carter understands that a person may not be able to change the hard facts of life, but a person may control one’s attitude. This can make all the difference.

In a way, this philosophy mirrors the story of the disc itself. Carter recorded a version of it and sold it to fans over the Internet and at her shows. She no longer had a record label or contract, but felt determined to put the music out there anyway. The record garnered a good buzz. Next thing the disc was being remixed with more instrumentation, better production values, and being released on the Yep Roc label. The disc may not sell as well as her big major label recordings of the ’90s, but the music will be enjoyed by a new, young audience, as well as old fans.

Musically, the production gives the songs a big feel, with layers of strings pushing the music forward. Carter’s voice sometimes gets a bit muddled in the mix, but that’s on purpose to give the general sound more of a country flavor than a singer-songwriter feel. When her vocals reemerge it’s to lay a hook or capture attention with a clever line. Carter’s vocal range is lower than it once was, which adds depth to her pronouncements. She can be both self-deprecating and proud at the same time. When she sings about love, which is often, she sounds like an authority.

The former author of “Little Love Letters” is stronger now and could write a book with what she knows. Good thing for us that she’s made a record instead because she’s a first-rate performer and songwriter.