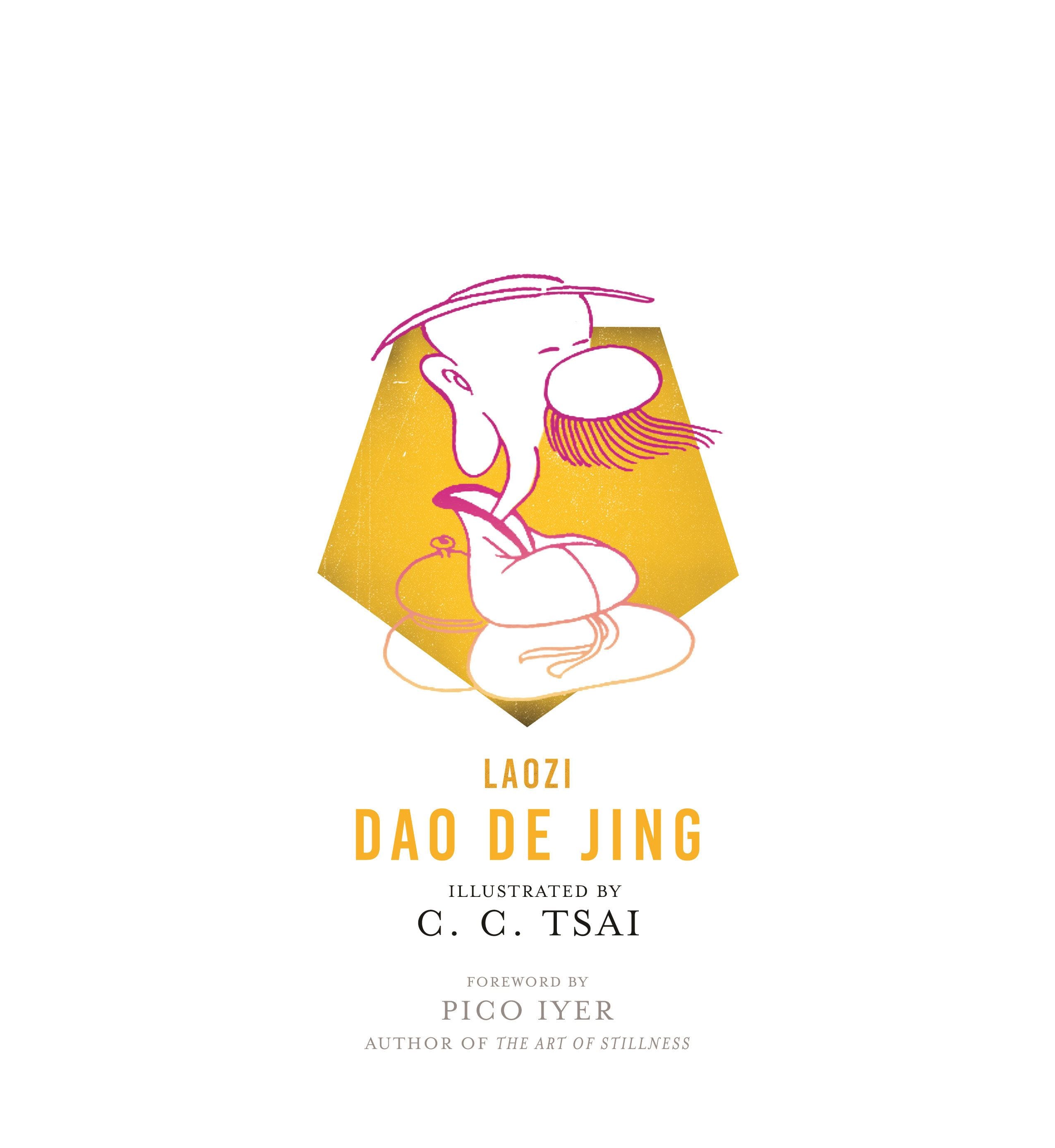 Chih-chung Tsai, a renown Taiwanese cartoonist, publishes as C. C. Tsai in English. Dao De Jing, which translates roughly as “The Way of Virtue”, is his fourth in a continuing series of Chinese philosophy adaptions, in collaboration with translator Brian Bruya. While the best known of the selected philosophers to many westerners is likely Confucius, Laozi may be equally influential and, according to legend, briefly taught Confucius. Bruya in his introduction acknowledges that Laozi may never have existed and that his famed book may have been written by multiple authors compiled over many years—and yet Dao De Jing‘s insights still endure.

A possibly non-existent main character provides Tsai the greatest freedom of interpretation. His cartoon Laozi features a head roughly a third larger than the size of his body. His chin merges with his neck in a single pen stroke, and his mouth is seemingly obscured by a comb-like mustache draped from his oval nose. His enormous curving ears are his largest features, extending almost to the top of his flat head.

While it’s odd to read the talk-balloon musings of a Yoda-proportioned philosopher, the juxtaposition provides a humorous undercurrent to the philosophy. Would the would-be Laozi approve of his words being mouthed by a cartoon version of himself? Based on Bruya, who praises the original work for its “catchy and superficially appealing” style, I suspect he would. I certainly do. Still, Little Laozi (he’s not named that, but there I use it to differentiate the historical character from Tsai’s rendering) alters Laozi’s words just by appearing to utter them.

Tsai applies the same cartooning norms to the philosopher’s surroundings. While likely uninfluenced by him, Tsai’s carefully curving and angled shapes are reminiscent of Al Hirschfeld‘s hyper-stylized caricatures popular in the US in the 1970s. Tsai’s sharp clean lines form similarly exaggerated and simplified figures. No crosshatching suggests depth or texture, so the interior spaces of most bodies are as empty as the panel space surrounding them. As it adapts aphorism about simplicity and balance, the style resonates well beyond its surface.

That style as well as the book’s layout approach are identical to Tsai’s The Way of Nature, an adaptation of Zhuangzi also published by Princeton University Press in 2019. I admit that at first glance, I was disappointed that Dao De Jing could easily be mistaken for the earlier work. But that’s a little like complaining that Shakespeare wrote only Shakespearean sonnets. When you innovate your own effective form, why alter it?

Tsai’s layout remains elegant. Built around consistent two-page spreads, each left-hand page opens with a full-height caption box containing Laozi’s original Chinese text inside double frames, and each right-hand page closes with the same. The side caption boxes never vary in size, but the amount of writing does, with as many as five columns of ideographs and as little as one, and always with copious white space unused. The side boxes also visually highlight where Tsai steps beyond his philosopher’s text. The opening of Tsai’s adaptation features six pages with empty side boxes—meaning the content, a brief biographical introduction to Laozi, is all Tsai.

I appreciate the general translation principle of providing originals and, even better, how well Tsai integrates them with the translated content sandwiched between. Tsai uses the columns as a visual element, with the lines that compose the ideographs echoed in the cartoon sections between them. Gutters separate the caption boxes, but adjacent frames are interconnected with single lines defining each set of panels. It’s a subtle effect, but the choice compresses the multiple panels into a single ideograph-like page unit.

The interiors of the panel are sparse, with the English text floating freely in negative space that merges with the mostly undrawn backgrounds of the cartoons. The thick black lines of the drawings, the English words, the frames, and the ideographs all combine in balanced compositions well-suited to the themes of Laozi’s writings. Such sage observations as “The idea cannot be clearly explained through language” takes on additional meaning. Tsai also creates a visual rhythm with Laozi often speaking the final, moral-like statement in the white space of an unframed final panel.

Bruya’s introduction is especially targeted at American readers who, he warns, tend to read Laozi through a Reagan-esque, libertarian lens. Reagan, Bruya notes, quoted the Dao De Jing when arguing for smaller government. Bruya’s translation of Chapter 60 is less pithy than the one coopted by Reagan’s speech-writer (“Govern a great nation as you would cook a small fish; do not overdo it.”), but I suspect it’s more accurate: “Governing a large country is like frying a small fish—you can’t turn it over too often.” And to Bruya’s credit, he encourages readers to seek out many translations to study their “different perspectives and explanations.”

Still, his warning seems key. Reading Chapter 57’s “The more laws there are, the more outlaws there will be” in isolation destroys the balancing principle at the heart of Laozi’s teachings. The goal is not less government, but less self—a concept harder to cut and paste into a GOP political speech. Laozi instead concludes his book with an aphorism well-known even during his lifetime, “To give is better than to receive” because it encapsulates the “non-contentious spirit” of sages, as well as “the spirit of the dao”.