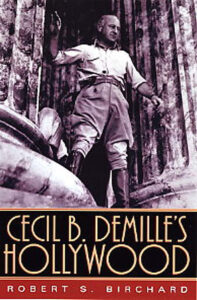 It was some awful bad luck for Cecil B. DeMille and his Civil War epic, The Warrens of Virginia, that they came smack up against D.W. Griffith and The Birth of a Nation, in 1915 — because for all the good things The Warrens of Virginia was, at the time, what it wasn’t was the revolution. Of course, it wasn’t long after Griffith revolutionized cinema that cinema went and revolutionized itself, by beginning to talk, and if you were a director you didn’t have to be a genius to make the transition better than someone who was one.

That’s how DeMille came to eclipse Griffith, in the end. That’s how he came to make more films, seen by more people, over a longer period of time. He made one extravaganza after the next, each one striving to be more spectacular than the last, CinemaScoped and Technicolored, playing shamelessly to the public’s basest tastes for melodrama, romance, and high adventure, to say nothing of the engine that drove all the self-righteous moralizing that mars the last half of an otherwise good film like The Ten Commandments [1956], and ruins completely many others.

Now we have a book — Cecil B. DeMille’s Hollywood, by Robert S. Birchard — that provides an impressively illuminating explanation of the instincts that allowed DeMille to make a transition that so many of his betters did not:

From the opening scene of Dynamite [DeMille’s first talkie] it is evident that DeMille immediately grasped the potential of sound to heighten the film experience. As described in Macpherson’s script the courtroom scene was to open with a closeup of the judge’s gavel in the best silent film tradition where sound effects had to be seen because they couldn’t be heard. In the finished film, DeMille opens on a wide shot of the courtroom with the sound of the gavel hitting the bench. Other innovative uses of sound include the jail scene with the dialogue of the wedding ceremony overlaid with hammering on the gallows and blending with a convict’s song; the stylized ticking of the clock as the real murderer is persuaded to confess; and the offscreen sound of an approaching car as anxious miners await the arrival of a doctor — all may seem dated today, but were startling (if largely unsung) innovations in 1929.

I quote at length for the purpose of saving you forty bucks, for this is the first and last thing of any value you will read in Cecil B. DeMille’s Hollywood, a book that isn’t much about Cecil B. DeMille or his Hollywood. If anything, it’s about DeMille’s films, but only in the most superficial of ways. Each film gets its own chapter, many irritatingly short, most unbecomingly long, with headnotes above each, offering, in agate type, statistics on the film’s producers, production dates, costs, release dates, and cast. Say what you will, at least this is a book that doesn’t make any pretensions to being readable.

In fact, it doesn’t make any pretensions to — or attempts at — being much of anything. There is no subtitle, which is not only odd but irresponsible, for a book with such a vague and convertible title. The language inside suffers from a flat, dry competence that will wear on you faster than a good old raucous brand of bad writing any day. The research is dutifully laid out, as we’re given detail after detail about production, release, cost, audience reception, critical reception, of each picture, moving through the motions, no silent film too dated, no talkie too insignificant, no crowd-pleasing epic too banal, to get this full-dress treatment, in one taxing chapter after another, complete with three-paragraph telegrams for every occasion. (How Birchard loves those telegrams, in all their unedited splendor.) What’s more, Birchard seems utterly, almost willfully, uninterested in DeMille as a man, as a flesh-and-blood human being complete with psyche, self, and soul. It was almost enough to make me want to give another look at The Greatest Show on Earth [1952], that sticky slathering of pure corn syrup DeMille used to cover the circus, with Charlton Heston, Betty Hutton, and Jimmy Stewart, among many others, doing the dirty work. But then I thought the better of it, for I realized then that I was only feeling unduly appreciative of a guy who just wants put on a good show, make buck or two, and send his audience away happy.